A new development proposal for 66 homes along the 200 Street corridor in Fernridge has residents concerned that traffic flow and the neighbourhood’s tree canopy will be negatively affected.

Several residents spoke out about these issues at a public hearing in July, when Platinum Group’s 15.98-acre rezoning application on 27 Avenue between 200 Street and 204 Street was up for public feedback.

The subdivision will encompass single family homes on 7,000 square-foot lots, and is being processed under the now defunct 1987 Brookswood-Fernridge Community Plan.

The first speaker at the hearing, Gordon Jewel, whose home backs onto the development site, said he is most concerned about the road layout — particularly for traffic coming off of 200 Street — and loss of trees.

There are 985 significant trees on the site; 99 are proposed for retention. Another 183 replacement trees are required, along with 89 street trees.

“The proposal is to knock all of the fir trees down and put little deciduous trees in the medians — I don’t think that is much of a trade off,” Jewel said.

“I have several trees on my property. As soon as those fir trees go down, I’m subject to the wind. The wind all comes from the southwest area. I will have all kinds of issues with my trees.”

Trevor Plater, who lives across from the development, said he shares Jewel’s concerns about the trees, and believes there hasn’t been “adequate planning” for roads.

He said turning onto 27 Avenue is already “precarious” as it is, and that a number of bad accidents have occurred on 28 Avenue.

“Currently there are 13 houses on the street (27 Avenue) — 13 properties. A couple of them have multiple houses. A few of them don’t have anyone living in them. So, the increase in traffic will be exponential. I think there’s some major safety concerns because of that,” he said.

Judy Gardine also lives in the area, and is concerned that 200 Street has not been widened to four lanes south of 36 Avenue.

“The traffic coming from the south comes very quickly through there,” she said. “And if you add all those hundreds of extra cars without taking care to have four lanes instead of two lanes, then you add that to 28th Avenue, and then add people coming out of 27th Avenue — it’s going to be tragic. Truly, it’s going to be really bad.”

Dale Newer lives on 28 Avenue and echoed the concerns about trees.

“We have a number of large trees in our yard. As anyone knows, big trees work as a system, and with those acres of trees gone, it puts my home and our neighbour’s homes at risk with the large trees,” he said.

He also fears that he and his neighbours are being placed in a “development sandwich” between the Platinum Group proposal, and another 56-house subdivision on 28 Avenue.

“Maybe at the end of the day it’s going to just be residential traffic, but in the interim, as we’ve heard from previous people who have development around them, it becomes a development circus,” he said.

“When we already have high speed traffic that we shouldn’t have running down the street, if you add dump trucks and other vehicles, I think it’s just going to be a number of years where 28th is going to be a disaster.”

The fifth speaker, Kirk Robertson, who often speaks on behalf of the Watchers of Langley Forests group, also shared concerns about tree retention.

According to the proponent, however, as many trees as possible are being saved.

Connie Johal, who spoke on behalf of the Platinum Group, said that many of the existing trees on the property are located on future roadways.

“That leaves us with approximately 500 trees to work with, and a majority of these trees are not in good condition and are considered poor candidates for retention,” she said.

“The tree bylaw required 177 new trees, and we are planting over and above (that) an additional 95 trees. So we are going over and above the requirements because we feel this is, quite frankly, the right thing to do. Some may say, save the trees no matter the condition, but quite simply, development is going to occur in Brooskwood and we want to ensure it is done properly.”

Johal also noted that, in addition to meeting requirements of the 1987 Brookswood-Fernridge Community Plan, the proposal has incorporated standards of the 2017 plan as well. For example, they are providing adaptable housing, electric vehicle wiring in the homes, a greenway along 204 Street and $1.2 million cash for the Township to provide future amenities, she said.

Consultant James Pernu of McElhanney Consulting added to her comments, noting that 202 Street and 27 Avenue — which are both quiet country roads — will be improved to half-road standards, and that a road dedication will be provided along 200 Street for future widening.

When it comes to trees, he, too, believes the company is doing what it can.

“This is now my seventh rezoning application under ’87 plan in Brookswood, so I’ve seen all kinds of fairly heavily forested sites where the degree of tree retention is measured in a few handful of trees retained,” he said.

“This is almost 100 trees being retained on this site, which is a significantly larger number than I’ve seen on the applications I’ve been involved in.” 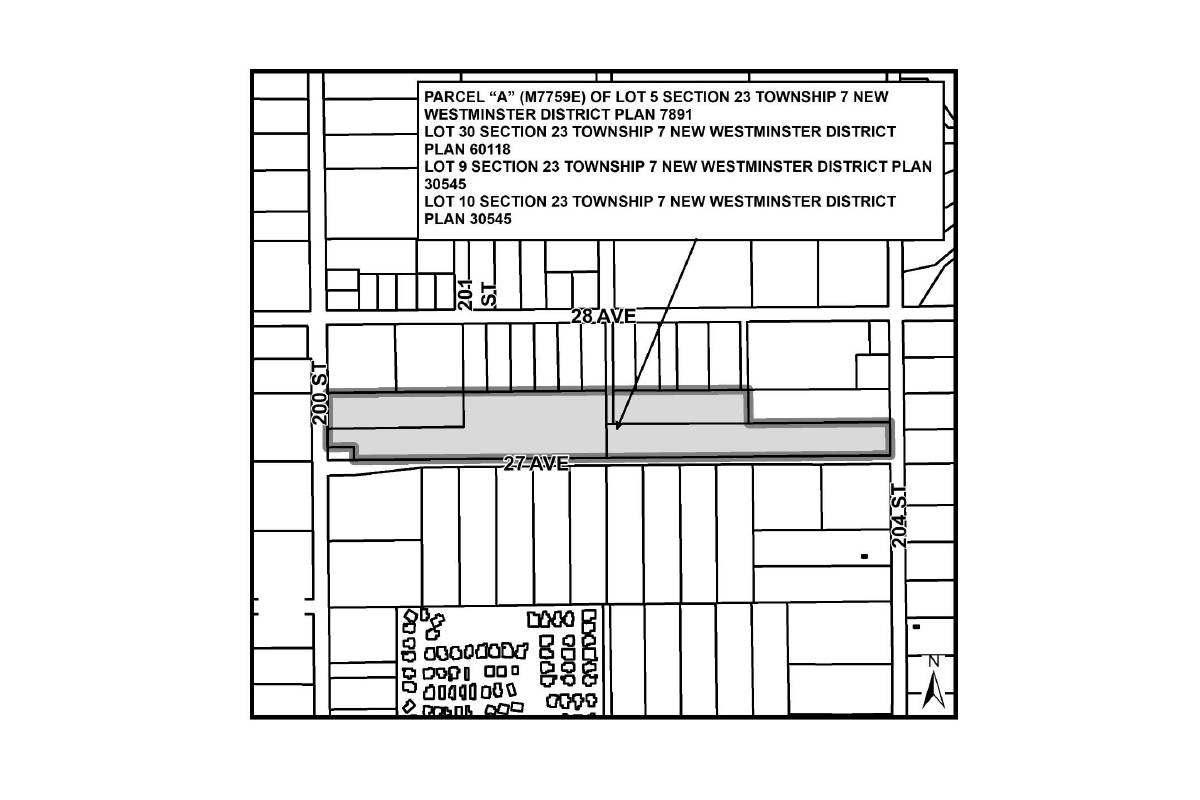