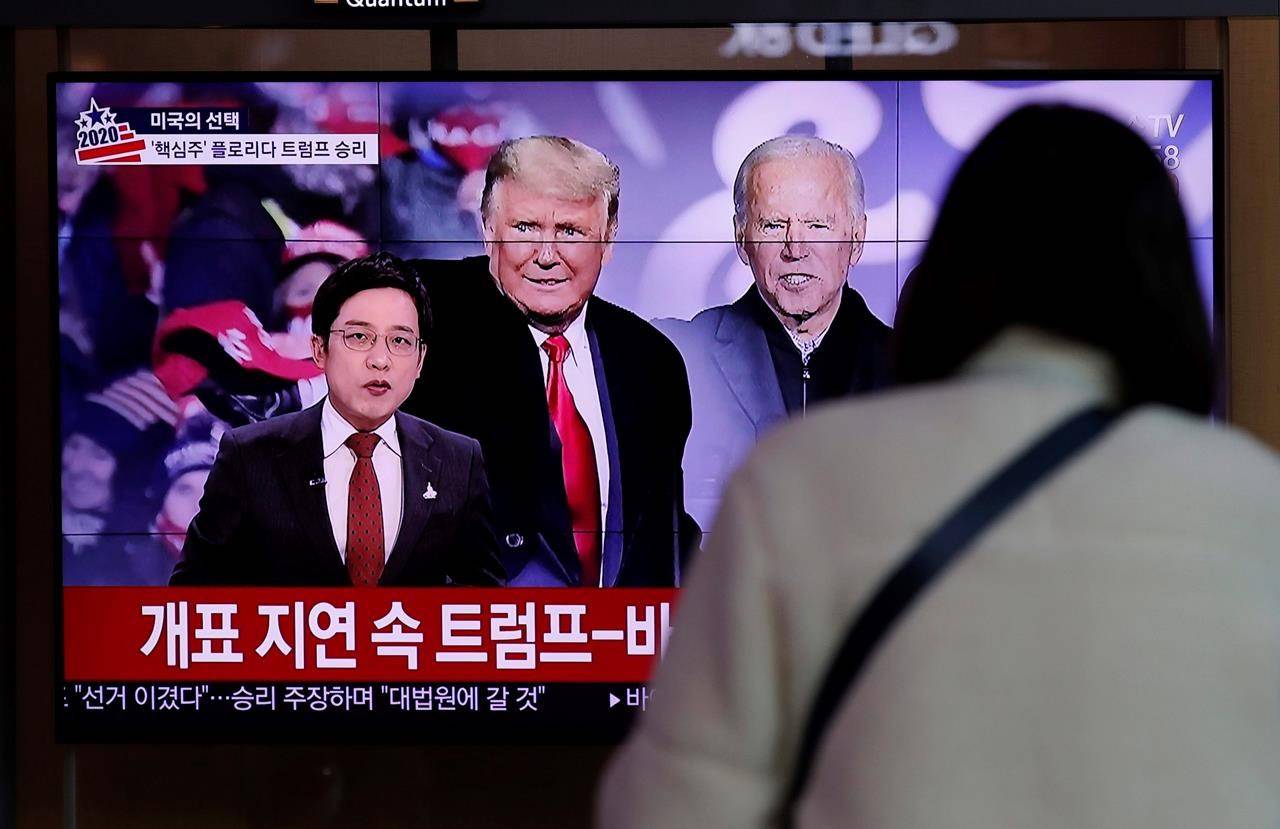 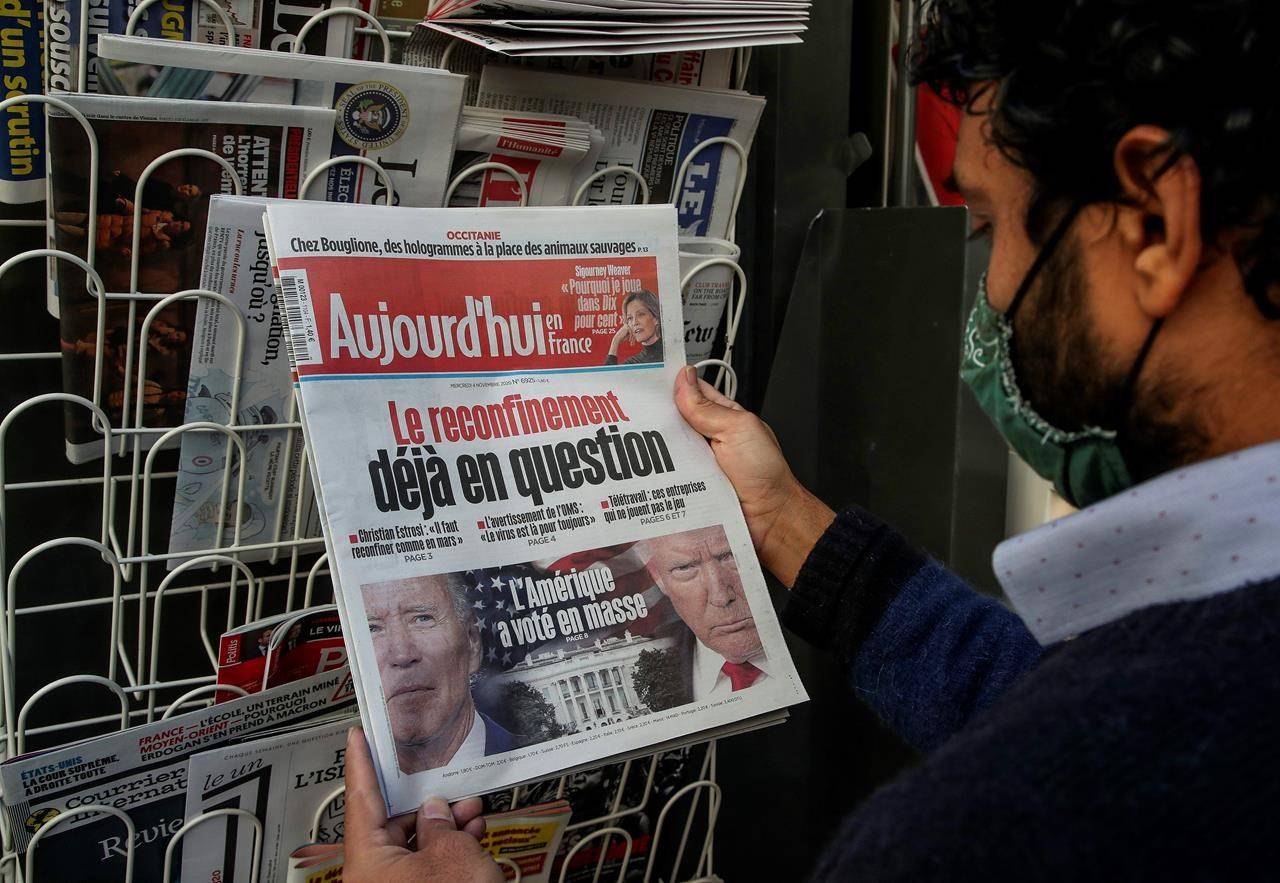 A man wearing a face mask as a precaution against the coronavirus reads the headlines about the U.S. presidential elections at a newspapers stand in Paris, Wednesday, Nov. 4, 2020. The world is watching as millions of Americans cast their ballots for the next president on Tuesday. (AP Photo/Michel Euler) 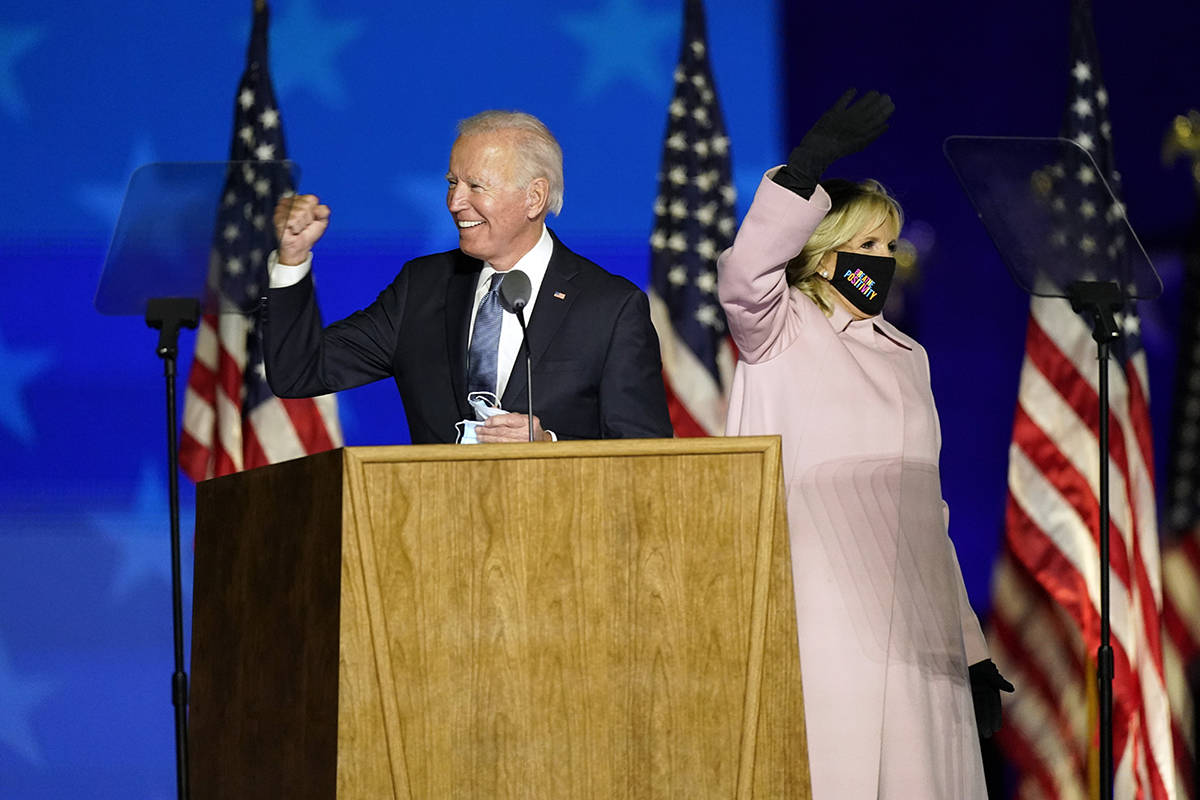 From Ford Model T cars that popped off the assembly line in just 90 minutes to 60-second service for burgers, the United States has had a major hand in making the world a frenetic and impatient place, primed and hungry for instant gratification.

So waking up to the news Wednesday that the winner of the U.S. election might not be known for hours, days or longer — pundits filled global airwaves with their best bets — was jarring for a planet weaned on that most American of exports: speed.

In the absence of an immediate winner between President Donald Trump and challenger Joe Biden, the guessing game of trying to figure out which of them would end up in the White House, and how, quickly turned global. Government leaders scrambled to digest the delay and ordinary people swapped views, hopes and fears on feeds and phones.

“I’m hearing it may take some time before things are sorted out,” said the finance minister of Japan, Taro Aso. “I have no idea how it may affect us.”

In Paris, a Spanish resident, Javier Saenz, was stunned to wake up without a declared winner.

“I thought there was going to be something clear. And I have read different articles, no one really knows who is going to win,” he said. “I am very shocked by that.”

But the lack of result was not that surprising to experts — and not, in an of itself, an indication that anything was wrong. In a year turned upside down by the coronavirus pandemic, many states made it easier to vote by mail. That meant a slowdown in compiling results because postal ballots mail often take longer to process than those cast at polling places.

Still, the unease of not knowing was mixing with sharpening concerns about how America might heal after the divisive election and anxieties fueled by Trump’s own extraordinary and premature claims of victory and his threat to take the election to the Supreme Court to stop counting.

From Europe, in particular, came appeals for patience and a complete tally of votes. In Slovenia, the birthplace of first lady Melania Trump, the right-wing prime minister, Janez Jansa, claimed it was “pretty clear that American people have elected Donald Trump,” but he was a lonely voice among leaders in jumping ahead of any firm outcome.

The German vice chancellor, Olaf Scholz, insisted on a complete tally, saying: “It is important for us that everything be counted and in the end we have a clear result.”

The main industry lobbying group in Germany, Europe’s biggest economy, warned that business confidence could be damaged by sustained uncertainty. And the German defence minister, Annegret Kramp-Karrenbauer, said that “the battle over the legitimacy of the result — whatever it will look like — has now begun.”

“This is a very explosive situation. It is a situation of which experts rightly say it could lead to a constitutional crisis in the U.S.,” she said on ZDF television. “That is something that must certainly worry us very much.”

In financial markets, investors struggled to make sense of it all, sending some indexes up and others down.

In the vacuum of no immediate winner, there was some gloating from Russia, Africa and other parts of the world that have repeatedly been on the receiving end of U.S. criticism, with claims that the election and the vote count were exposing the imperfections of American democracy.

“Africa used to learn American democracy, America is now learning African democracy,” tweeted Nigerian Sen. Shehu Sani, reflecting a common view from some on a continent long used to troubled elections and U.S. criticism of them.

In Zimbabwe, the ruling ZANU-PF party’s spokesman, Patrick Chinamasa, said: “We have nothing to learn about democracy from former slave owners.”

Traditional U.S. allies clung to the belief that regardless of whether Trump or Biden emerged as the winner, the fundamentals that have long underpinned some of America’s key relationships would survive the uncertainty and the U.S. electoral process.

“Whatever the result of the election, they will remain our allies for many years and decades, that is certain,” said Thierry Breton, the EU’s commissioner for the internal market.

That idea was echoed by the Japanese prime minister, Yoshihide Suga, who told a parliamentary session that “the Japan-U.S. alliance is the foundation of Japanese diplomacy, and on that premise I will develop solid relationship with a new president.”

EXPLAINER: A long night, or more, before U.S. president is known

Alberta man walking over 1,000 km through B.C. to honour family lost to cancer