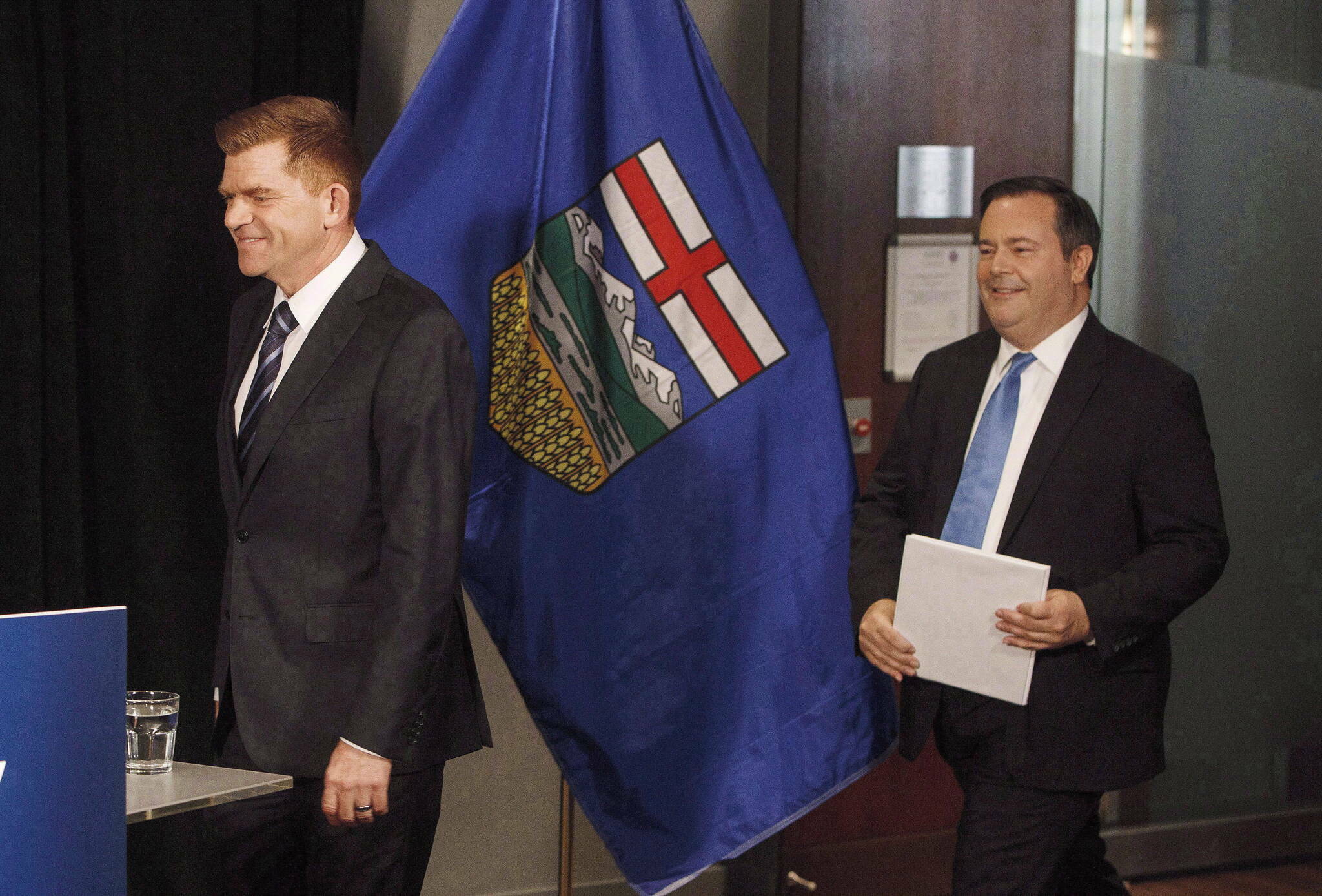 Alberta Wildrose leader Brian Jean, left, and Alberta PC leader Jason Kenney walk in to a press conference to announce a unity deal between the two in Edmonton on Thursday, May 18, 2017. THE CANADIAN PRESS/Jason Franson

An upcoming vote to decide the fate of Jason Kenney as United Conservative Party leader and Alberta premier is driving up membership numbers and igniting concerns about possible rule changes and ballot box shenanigans.

UCP executive director Dustin van Vugt, in a Sunday email to constituency presidents, said the number of people who are signed up for the April 9 vote of confidence has reached almost 14,000.

“Our membership has more than doubled,” wrote van Vugt in the email obtained by The Canadian Press.

Saturday was the cutoff day for new members to sign up to vote, but existing members have another three weeks to do so.

“(There are) 13,718 members registered for our (special general meeting) by the early-bird deadline and registration is still open with three weeks to go,” wrote van Vugt.

“It’s not unreasonable to predict that we could get as high as 20,000 people.”

Van Vugt said work is being done to finalize registration lists and figure out logistics. Members are to cast their ballots in person between 12 p.m. and 6 p.m. at the Cambridge Hotel and Conference Centre in Red Deer, Alta.

Sources told The Canadian Press that the UCP committee in charge of the vote was to meet Monday to consider whether to allow voting over three days, each day in a different city: Edmonton, Red Deer and Calgary.

Any such change would have to be put to the full party executive board for ratification.

Dave Prisco, UCP communications director, said in a statement that there was no executive meeting Monday, but declined to comment on a possible move to expanded voting.

“I suspect we’ll have more details on logistics later this week.”

The leadership review, a UCP rule designed to ensure grassroots accountability, has ignited a ferocious, fractious battle within the party.

There has been open discontent by a segment of Kenney’s caucus and party over his leadership and COVID-19 policies. Several polls have indicated that a Kenney-led UCP would lose to the Opposition NDP in next spring’s election.

Kenney, in an attempt to quell growing dissatisfaction, agreed months ago to move up the leadership vote from this fall to April.

The rules require Kenney to receive 50 per cent, plus one, of the vote. Otherwise a leadership race is triggered.

Kenney has made it clear he considers that the bar for success. Leaders who have not received a strong mandate in a leadership review — usually two-thirds support or more — have traditionally stepped down.

The vote remains three weeks away, but Kenney appears to be on a campaign footing. Three of his staff, including chief of staff Pam Livingston and executive director of communications Brock Harrison, have gone on unpaid leave to round up support.

Other political staff have been urged to sign up to work the phones on Kenney’s behalf on their off time.

Jean, running on a platform to have the leader replaced, said Kenney’s policies and top-down leadership style have made a mockery of the party’s grassroots ethos and threaten an NDP win in 2023.

Jean, the former Wildrose party leader, joined with Kenney’s Progressive Conservatives in 2017 to form the United Conservatives. Jean then lost the UCP leadership race to Kenney in a contest marred by allegations of collusion, backroom deals and ballot box irregularities. The RCMP continue to investigate allegations of criminal identity fraud related to the vote.

Jean has been urging members to sign up for the April 9 vote. On Friday, he called for an independent auditor and other safeguards to ensure things remain on the up and up.

“As I am sure you can imagine, I have a particular interest in seeing that the UCP’s upcoming special general meeting is conducted to the highest standards of integrity,” Jean said in a statement.

“My concerns are with things outside of the returning officer’s control. “

Jean said he wants an auditor to oversee membership sales and registration. He said he’s concerned people will find a way to circumvent the Saturday cutoff for memberships and pad the list.

He also said there shouldn’t be any late voting rule changes.

“Members and potential members have made choices based on the information in the notice of meeting. Making substantial changes now would be unacceptable.”

RELATED: Brian Jean set to return to Alberta legislature, gears up for showdown with premier

Langley university to get big boost in number of nursing spots