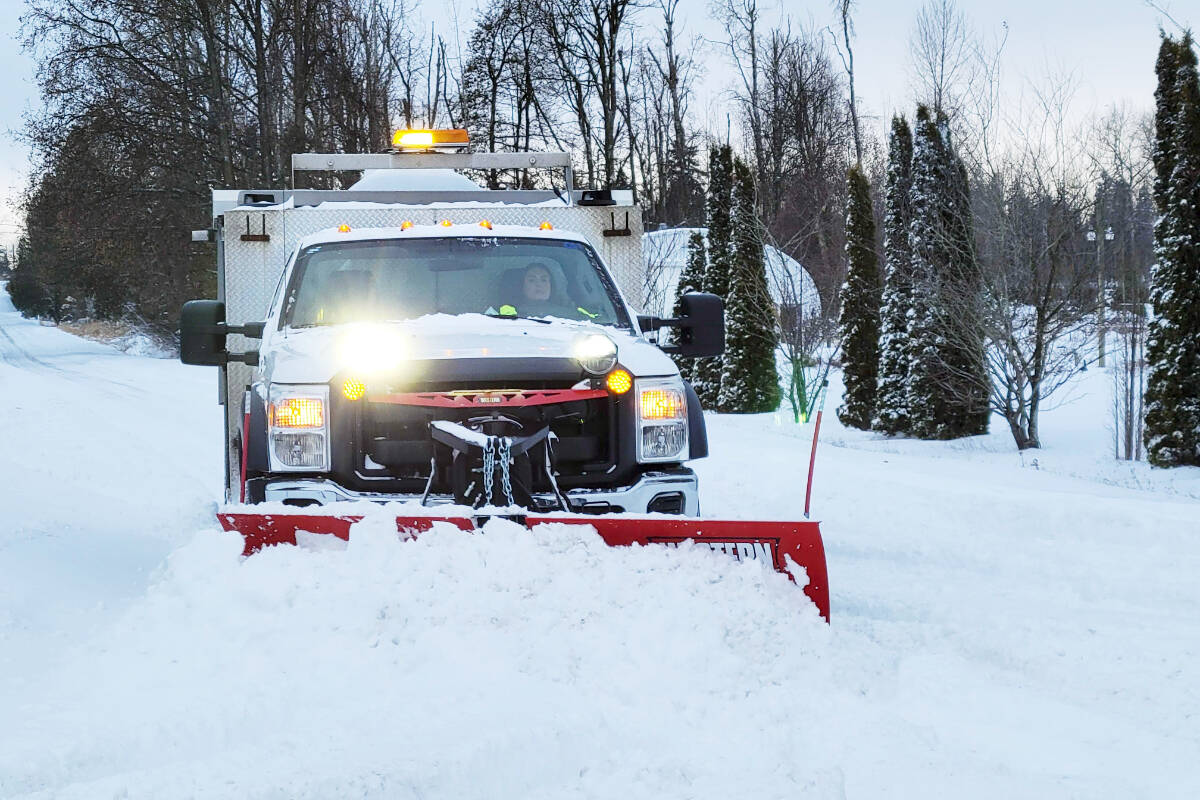 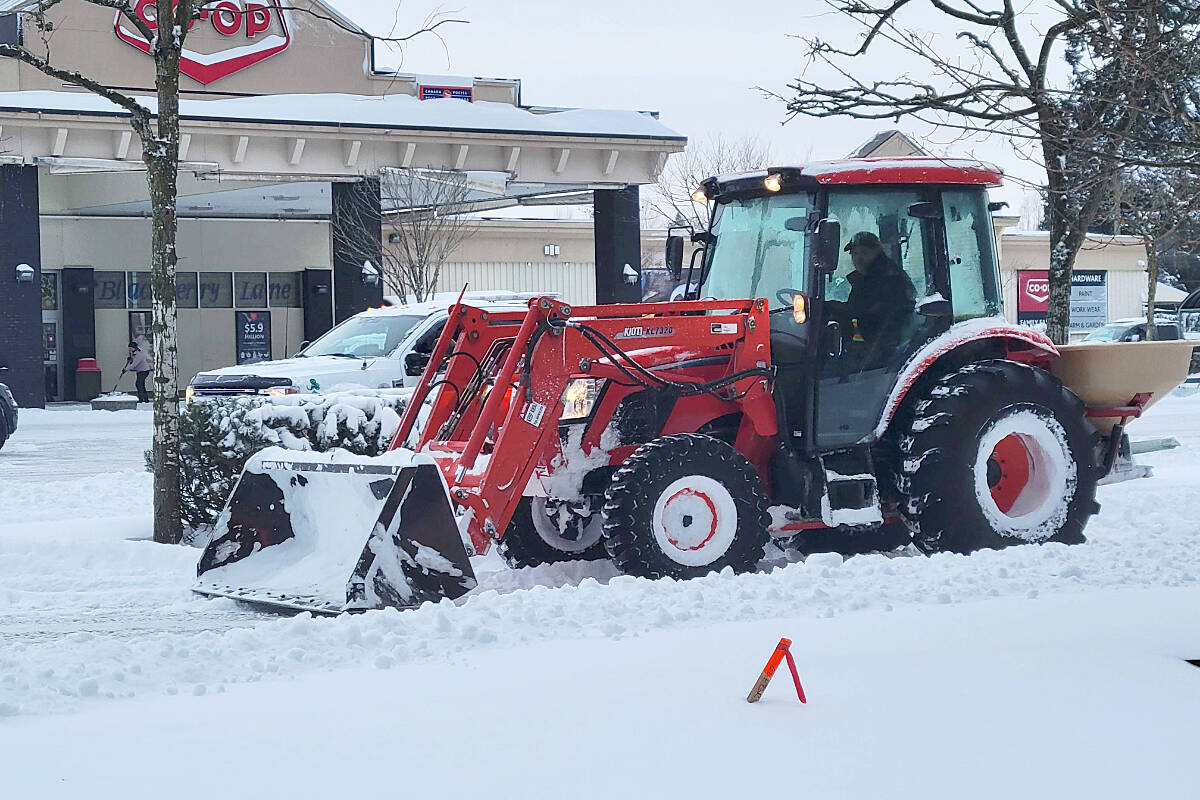 Getting the parking lot plowed out at the Otter Co-op on Tuesday, Dec. 20. (Dan Ferguson/Langley Advance Times) 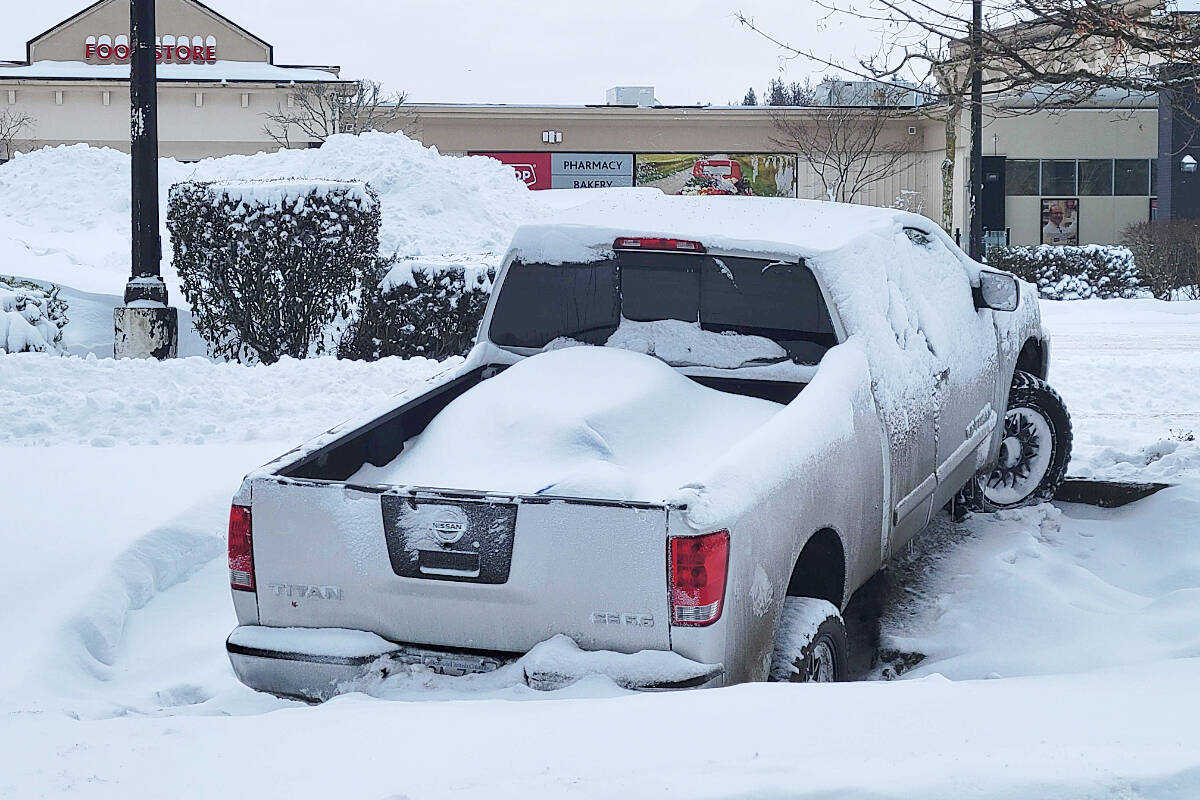 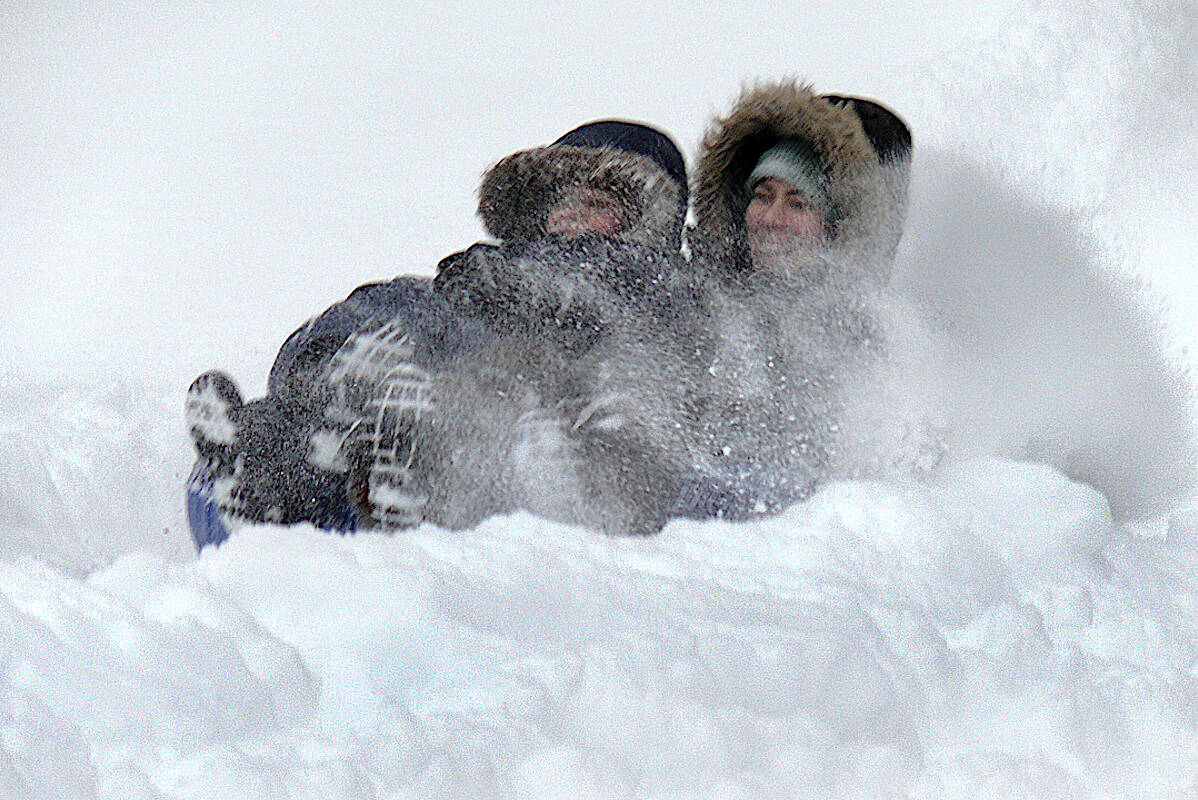 It wasn’t all bad. Members of the Austen family took advantage of the fresh snow Tuesday Dec. 20 on the slope near George Preston arena. Mom Jessie and Toby went bombing through the fresh snow. (Dan Ferguson/Langley Advance Times) 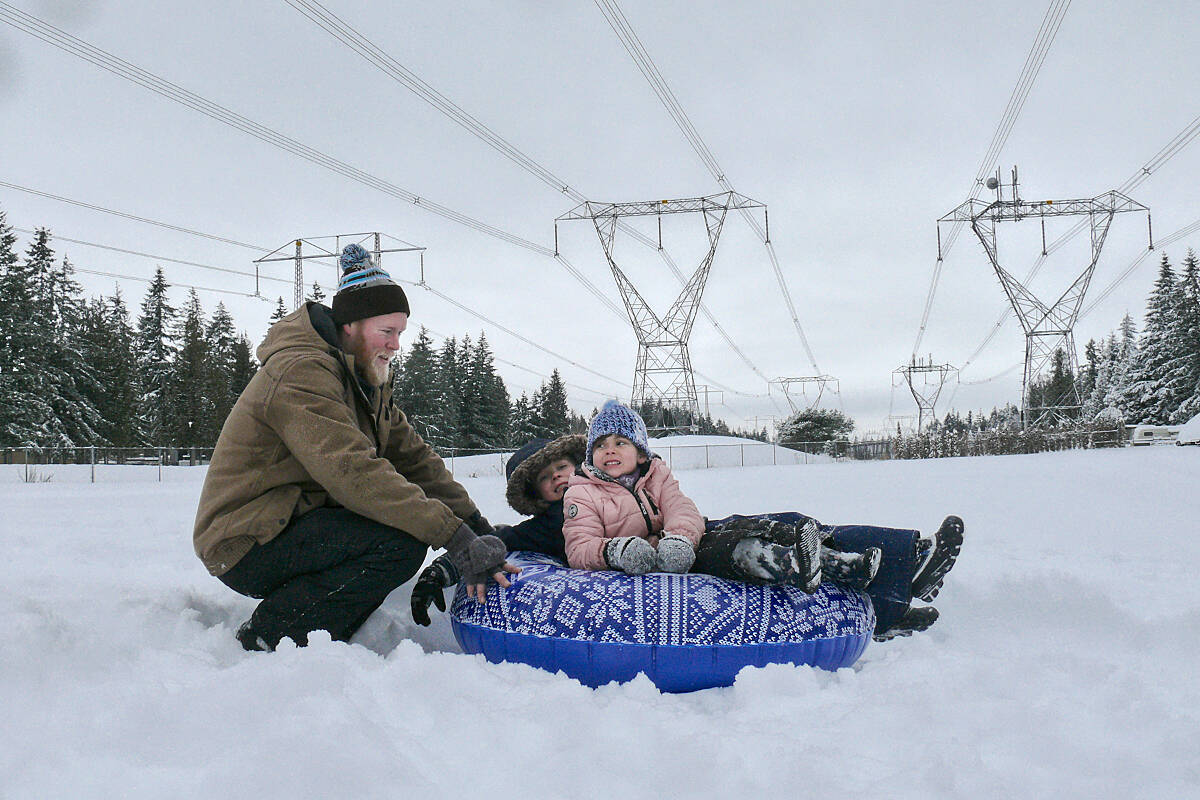 It wasn’t all bad. Members of the Austen family took advantage of the fresh snow Tuesday Dec. 20 on the slope near George Preston arena. Dad Tom gave Toby, 7, and Ella, 4, a push.(Dan Ferguson/Langley Advance Times) 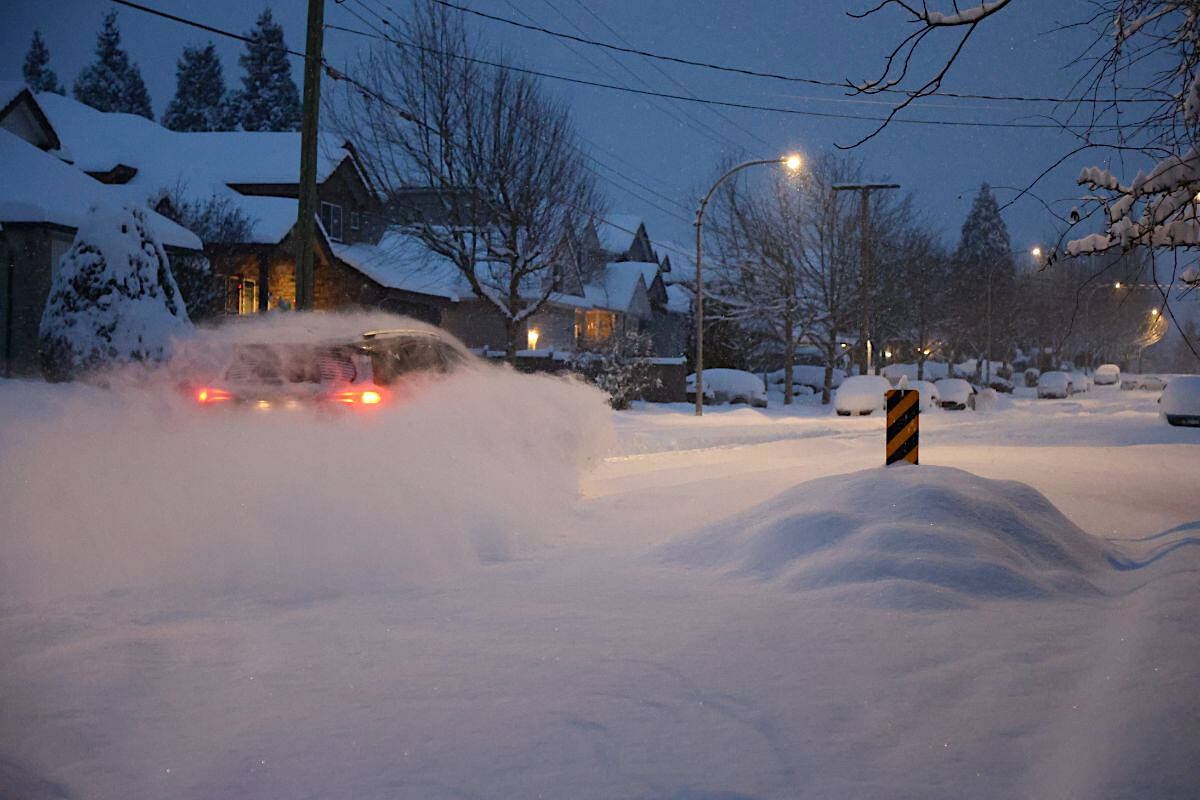 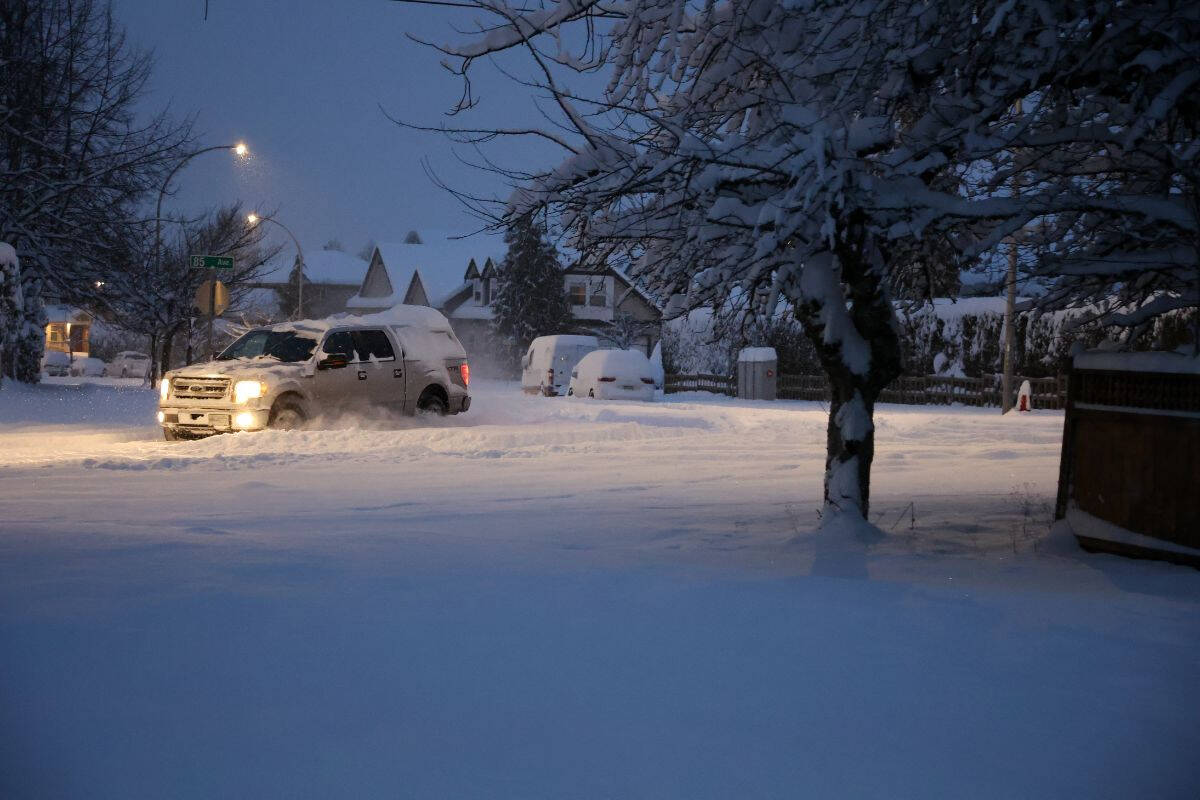 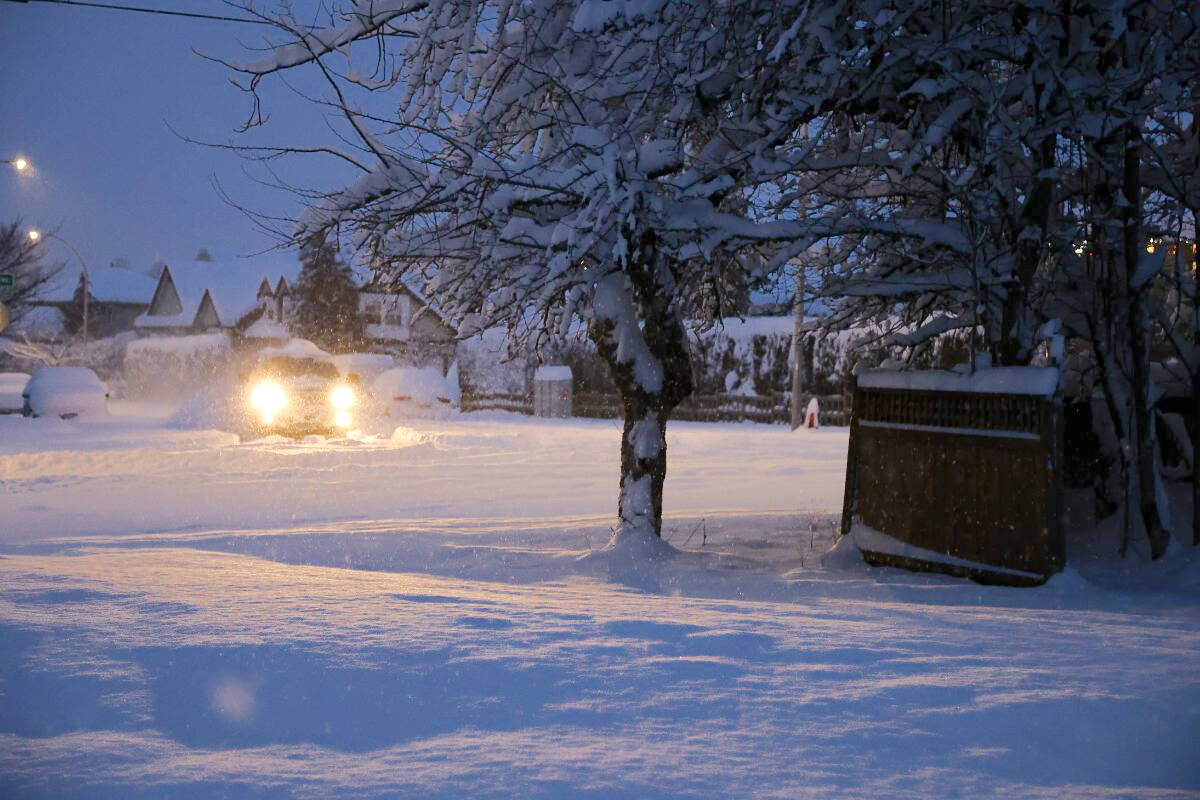 A blanket of snow hit Langley overnight on Monday, Dec. 19 and into Tuesday morning, leaving those who had to go to work struggling on icy streets and unplowed side roads.

The amount of snow appears to have been about double what was forecast, at least in some areas of Langley, said Aaron Ruhl, manager of engineering operations for Langley Township.

About 15 to 20 centimetres was expected, which would have been a significant snowfall for Langley, but certain neighbourhoods got more.

North Langley seems to have been hit particularly hard, with heavier snow in Walnut Grove, Fort Langley, and parts of Willoughby.

Regional authorities were advising people not to drive at all if they didn’t have to, and Ruhl said the same thing.

If you do have to go out, drive slowly and take it easy, he said. 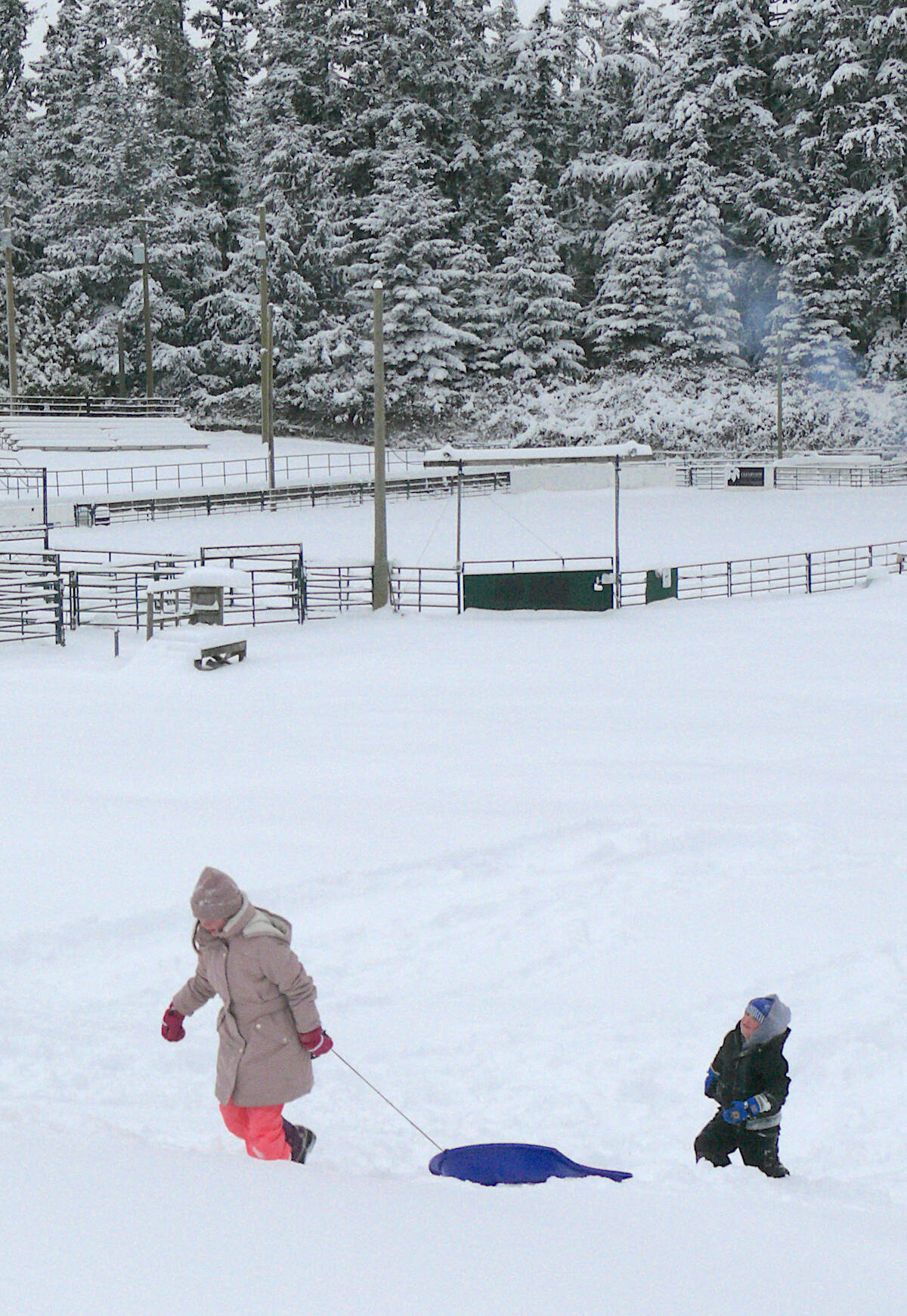 Alexandria, 10 and brother Charles, 5, got some sledding in at the slope near George Preston arena on Saturday, Dec. 20. (Dan Ferguson/Langley Advance Times)

In Langley Township, snow plow crews were very busy, but they were sticking to first priority routes.

Those are major through roads that include Fraser Highway, 200th Street, 88th Avenue, and 16th Avenue.

Secondary routes, which includes smaller roads in industrial and commercial areas, will have to wait.

“I would say most of the day we’re going to be on priority ones,” said Ruhl.

Quiet rural side streets and suburban cul-de-sacs don’t get plowed until first and second priority routes have been completed, if at all. And if there’s more snow or ice, snowplow drivers head back to the first-priority routes again.

𝗙𝗮𝗰𝗶𝗹𝗶𝘁𝘆 𝘂𝗽𝗱𝗮𝘁𝗲𝘀: Our community and recreation facilities are open today but some programs are currently impacted due to weather conditions. Before venturing out, get the most up to date info by directly contacting your local centre at https://t.co/2UgN6ehwG2

Langley City was also sending out its truck and snowplow crews to work nonstop, but was also attending to top-priority routes first, meaning residential side streets might not be plowed right away.

“It’s important to keep in mind that heavy snowfall blankets roads quickly, even if our plows have just completed a pass through,” a Langley City weather update said. “In addition, salt and brine that is applied takes some time to get worked in — as vehicles travel on roads, this helps work salt in to break up ice/snow.”

Langley Township was running its recreation services, but some programs were impacted by the difficulty people were having getting around. The Township recommended calling in before going to local rec centres.

In Langley City, Douglas Recreation Centre and the Library were closed. Timms Community Centre was closing at 4:30 pm, and all programming will be cancelled, a City online announcement said.

There was no curbside collection Tuesday in Langley City due to the weather.

“Crews will assess the situation as the day goes on regarding tomorrow’s schedule. Updates will be provided as soon as we have information to share. Missed collections will be the first priority when collection resumes. As it will take some time to catch up please allow extra time for curbside material to be picked up. Please do your part and clear snow from lids and tops of your collection materials and shovel around your collection containers.”

All of the plows are working to clear roads in a priority sequence — staff are providing 24/7 coverage working in shifts as part of our snow response plan. Remember, in heavy snowfall, roads get blanketed quickly and can look untouched even if a plow passed through recently.

The City dispatched crews to work on priority road routes. If the snow continues Parks staff will be called in early tomorrow morning to address priority sidewalk and parking lots. pic.twitter.com/Ws9gmgtDBg

Kwantlen Polytechnic University announced all campuses would be closed due to the weather with no in-person classes or on-campus services.

With schools closed and many people choosing to stay home, traffic was light, but slow during the morning rush hour.

More photos from the day can be veiwed online at the Langley Advance Times Faceboom pages here and here.