In Langley East, NDP candidate Megan Dykeman was in first with close to 800 votes more than Liberal Margaret Kunst with all 111 ballot boxes and 20,469 votes counted, but final results likely won’t be known for two more weeks, when mail-in ballots are tallied.

B.C. Elections reported Dykeman had 38.78 per cent of the tiotal, Kunst was second with 34.90 per cent, and Conservative Ryan Warawa was third with 12.86 per cent. Cheryl Wiens of the Green party had 11.69 per cent, Libertarian Alex Joehl had 0.93 per cent, and independent Tara Reeve had 0.84 per cent.

Front-runner Dykeman was even more of a last-minute candidate in a B.C. campaign where many hopefuls were named at the last minute.

Dykeman was named the NDP candidate in Langley East shortly after Langley Township councillor Eric Woodward withdrew, just one day after his NDP candidacy was confirmed.

In her campaign bio, Dykeman described herself as a Langley farmer, managing director of a small business, 10-year school trustee and current Chair of the Langley Board of Education.

Dykeman has also sat on Langley’s agriculture and economic advisory committee, chairing the blueberry canon taskforce. And she is a founding leader of the Langley 4-H poultry club.

Langley Advance Times reached out to Dykeman for comment on election night.

Despite trailing, second-place Kunst maintained a positive tone on election night, which she spent with supporters at the Redwoods Golf Course lounge.

“Rich Coleman was a great B.C. Liberal MLA for many years.”

Kunst’s campaign was dogged by controversy over her vote as a Langley Township councillor that called for a policy review before a rainbow sidewalk was approved.

The B.C. NDP called for Kunst to be removed as a candidate.

Kunst, who is a Langley Township councillor, said her vote was about the way such projects are approved, rather than a single crosswalk.

“This is purely a policy decision on my part,” said Kunst, who had few comments during the council debate on Sept. 21.

Following that, Conservative hopeful Ryan Warawa watched the returns at his mother’s home in Willoughby while Green hopeful Cheryl Wiens viewed the count at the house of a supporter in Fort Langley.

For Warawa, son of the late Langley – Aldergrove Conservative MP Mark Warawa, the campaign went well, considering how fast it had to come together after the snap election was called.

“I’m just amazed that a month ago, this campaign didn’t exist,” he told the Langley Advance Times as he waved at passing cars on 88th Avenue near 200th Street.

With him was his mother, Diane, a veteran of many campaigns with her husband and her son.

“With one month, and putting together a whole campaign and getting volunteers, and all that goes with it,” she summed up.

“I think he did amazing. I’m very proud of him as Mark would have been.”

Wiens chose the Carvolth bus exchange at 202nd Street and 86th Avenue for her final act of campaigning, to underline her party’s commitment to public transit.

For Wiens, the positive part of the campaign for the political novice was meeting people on the campaign trail, and the frustrating part was trying to get the candidates for the NDP and Liberals to show up for some public forums.

“I met with so many interesting people,” Wiens remarked.

“We went door-to-door, at times phone calling [and] I have to tell you there’s just so many good things going on in Langley. And our campaign was happy to participate in those events and talk to those people.’

It was “unfortunate,” she said that the candidates for the two major parties didn’t seem to feel the same way.

“There was some trouble with getting particularly the Liberal candidate Margaret Kunst and the NDP candidate Megan Dykeman to participate,” Wiens noted.

Langley voters may not know who has won the riding for weeks.

Due to the pandemic, more British Columbians have decided to vote by mail-in ballot than ever before. Election results won’t be finalized until after Nov. 6., after those mail-in ballots are counted.

In the Langley East riding, 11,799 mail-in ballots were requested from Elections BC or 22 per cent of the 52,882 registered voters in the region.

Across B.C., a total of 497,000 mail-in ballots were returned to Election BC, as of Friday, Oct. 23, representing 69 per cent of those that had been requested. 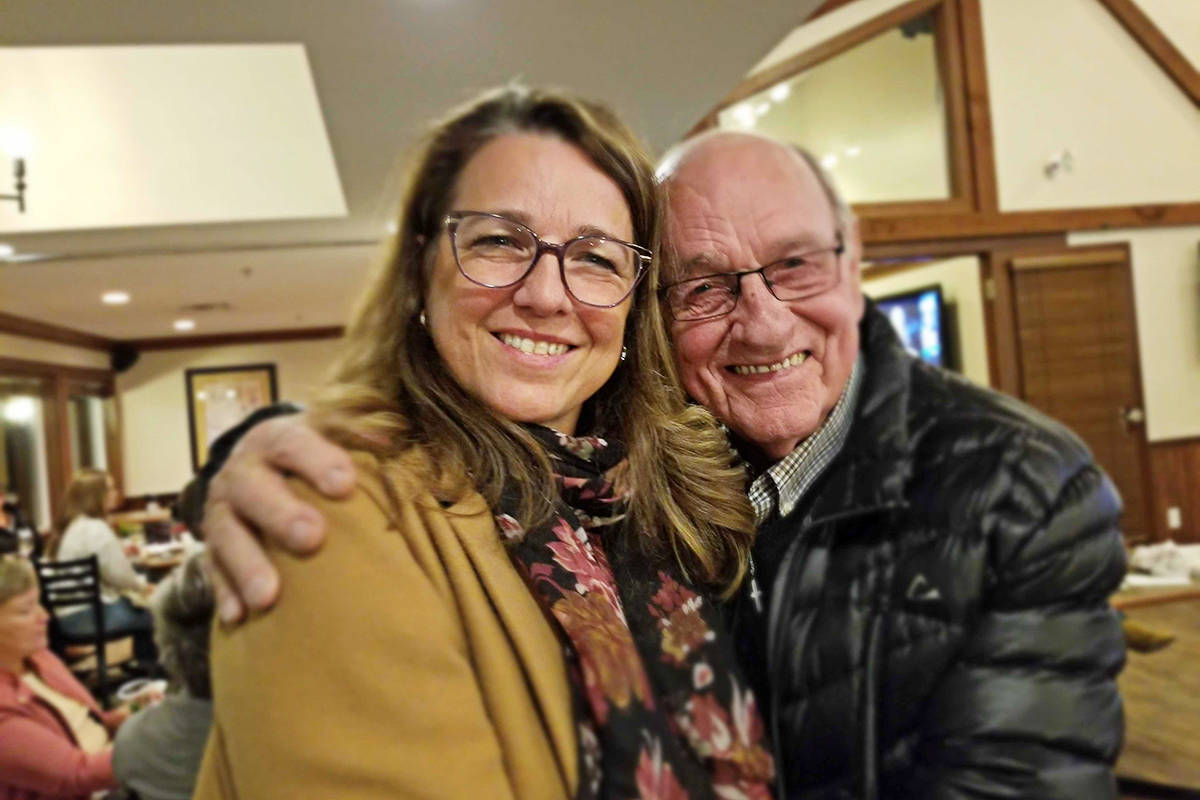 Liberal Margaret Kunst got a hug of encouragement from dad Ted VanderHoek while she watched the election results. (Dan Ferguson/Langley Advance Times) 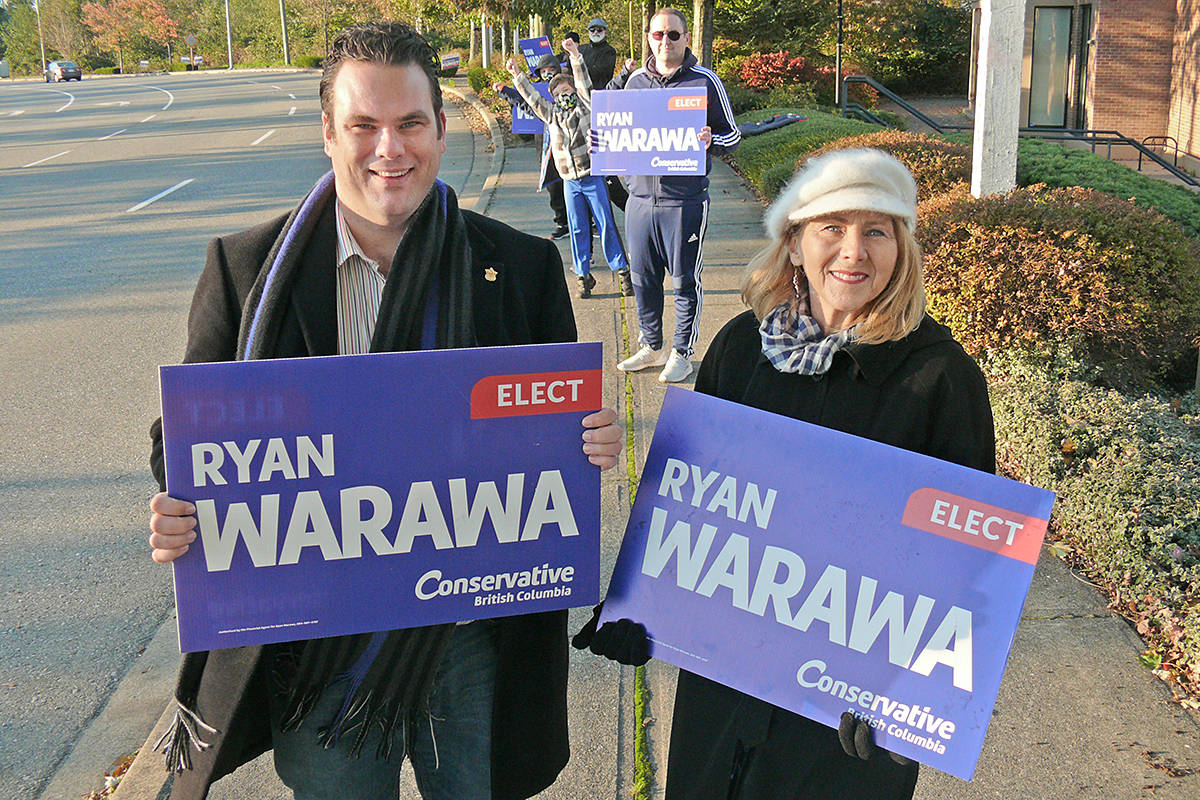 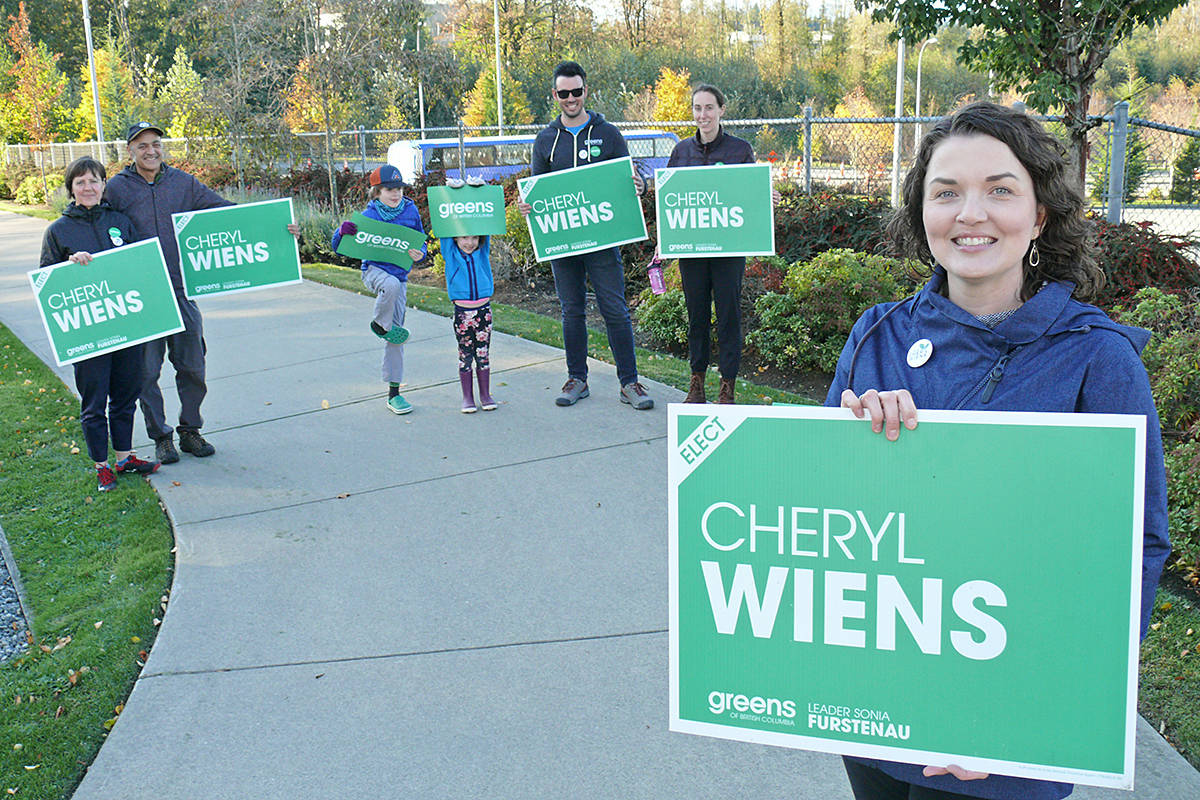