Aldergrove resident Kristy Addison wants to find the people who rescued her and her small dog from a coyote attack.

It happened on Wednesday, June 29, around 9:30 p.m. during the final stretch of Addison’s evening walk with her dog, Cena, a seven-year-old Keeshond, just south of Robertson Crescent on 244th Street, about a five-minute walk from her home.

She noticed cattle in a farm on the west side of 244th were on edge, “very vocal and acting odd around their calves.”

“Cena and I crossed to the east side of 244th thinking maybe her appearance or smell was startling the cattle,” Addison recounted.

“At that moment, a pack of coyotes came out of the ditch right in front of the cattle farm.”

There were three of them, and they started to head in her direction.

Addison began to back away, concerned the coyotes would view Cena as prey.

When one of them rushed at her, she yelled back, “while trying to puff up to appear larger and stare him down and challenge his dominance as at this point I still wasn’t afraid.”

It didn’t work. As the coyotes moved closer, she scooped her dog up.

After she had Cena on her shoulders, one of the coyotes, the one that had rushed her in the first place, started snapping at her legs, jumping up and trying to get at Cena.

“I was trying to kick him and back up, all while still yelling as deep and gruff as I could.”

“The coyote has now tagged my leg and pants with its mouth at least three [to] four times. And I’m having heart pains, as my heart is pounding and I’m starting to absolutely panic in sheer fight or flight mode and am clearly going into shock.”

At that moment, a darker coloured SUV arrived on the scene heading north on 244th towards Addison and her dog.

“In a matter of seconds, the incoming vehicle rushed the [most aggressive] coyote off the road and pulled up beside Cena and I, not knowing exactly what had happened, but knowing we had just had a pretty bad run-in with some coyotes and were fighting and running for our lives when they came across us.”

The older couple inside the SUV opened their back door to give Addison and Cena a ride to safety. 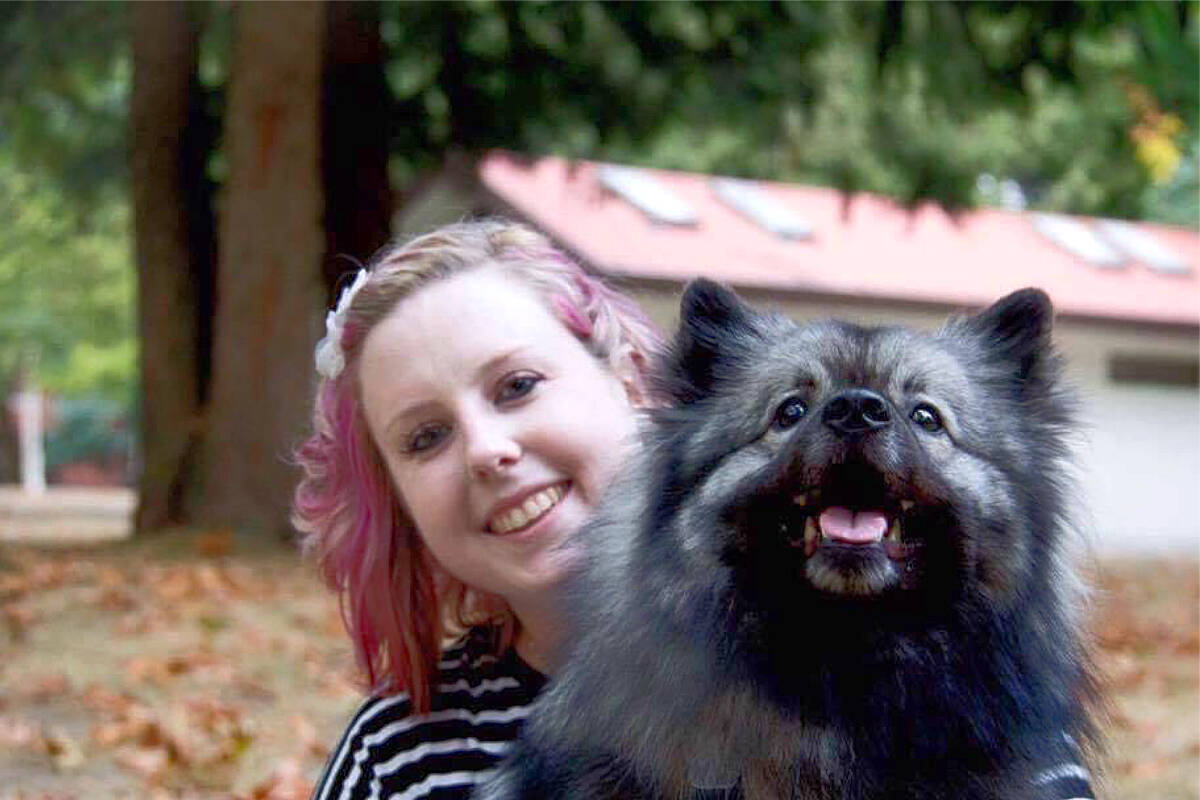 Kristy Addison and Cena, seen here before their frightening encounter with a pack of coyotes, escaped without serious injury, though Addison suffered a bruise on one leg and Cena lost some fur. (Special to Langley Advance Times)

“I just kept saying ‘thank you, thank you! God bless you! You are nothing short of heaven-sent and heroes!’”

The couple told Addison that, years before, on Robertson Crescent, a group of coyotes had come after their Pomeranian, and they have not walked in the area after dinner time or dusk since, a rule Addison intends to follow.

She escaped her “scary and definitely near death experience” with a couple of holes in the leg of her pants and a small bruise on her leg.”

Cena lost a few tufts of fur and is “pretty rattled,” Addison said.

Addison, who did not get the names or contact information for her rescuers at the time, has gone public in hopes of locating them.

“I just kept thanking them, I didn’t think to get a name.”

“I hope one day I can put a name to the faces that saved my beloved dog’s life and quite possibly mine.”

If you see a coyote, the SPCA advises scaring it away by yelling, stamping your feet and waving your arms.

“Make lots of noise and try to look big. This may feel silly, but will help the coyote avoid future problems. Teach children how to scare away a coyote if they see one, but never throw anything at the animals.”

Coyotes are generally not dangerous to people, the SPCA said, but some lose their fear when they are fed and may attack small pets or unattended small children.

This may have been a factor in a recent series of incident involving coyotes in Vancouver’s Stanley Park over December 2020 and January 2021.

After about 13 people were chased around Brockton Oval and Hollow Tree near Prospect Point in Stanley Park, and some were bitten badly enough to require medical attention, two coyotes had to be euthanized.