On the last day of dancing at Lisa Dew’s Langley City school, dozens and dozens of current and former students dropped by to say goodbye in a drive-by farewell held Saturday, June 19.

Some took part in a series of “flash mob” dances staged throughout the day in the front parking lot of Lisa’s School of Dance and on the sidewalks facing the school along Industrial Avenue.

For the first performance, Dew was among the dancers put though their paces by her daughter Loni, who choreographed the show.

“It’s been an emotional roller coaster, to say the least,” Dew told the Langley Advance Times.

Heading into an “early retirement,” Dew said she plans to do some choreography “to keep my foot in it, so to speak” and was looking forward to having more time with her four young grandchildren.

After 35 years of teaching dance, Dew was forced to shut her studio down due to coronavirus restrictions that made practicing and performing all but impossible.

Among the visitors on Saturday was Langley City mayor Val van den Broek, who praised Dew.

“Lisa has inspired and encouraged numerous students over the years and will be greatly missed in our community,” van den Broek commented.

“I wish her and her family nothing but success and happiness with their future adventures.”

Janet Foss and her daughter Kathy showed up in the outfits created for school shows by Dew’s mother, Darlene Dew in the early days.

In an online message, Dew said she was thankful for “love and support from our community and our amazing dance families. I have made lifelong friends and have wonderful memories and experiences to look back on. I was an 18-year-old young woman with a dream. I succeeded in making my dreams come true and I would like to thank everyone who has been a part of the journey.”

Provincial COVID-19 restrictions imposed on the fitness and dance industry made it nearly impossible for the studio to conduct classes.

While the studio was able to access provincial subsidies to help keep afloat, it wasn’t enough.

“My entire adult life has revolved around the studio and the relationships built and nurtured there,” Dew said.

“I truly treasure the friendships I have made and maintained over the years. Just because the studio is closing, does not mean our friendships come to an end. I cannot wait for better non-COVID times when we can gather together and enjoy each other’s company again.” 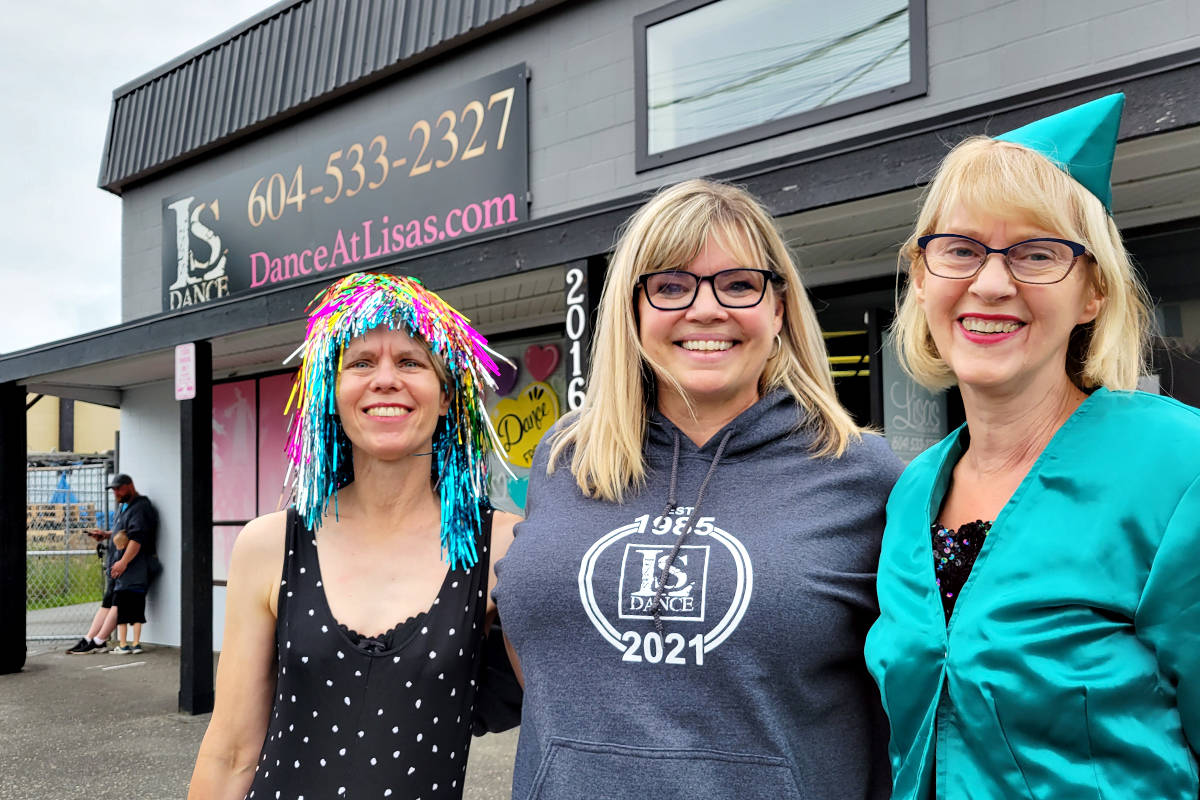 Kathy (L) and Janet Foss (R) showed up in the outfits from past school shows to say goodbye to Lisa Dew (centre), school founder, at a drive-by farewell bash on Saturday, June 19. (Dan Ferguson/Langley Advance Times)

Community donates 1,000-plus bottles of water in 1 morning for Chilliwack homeless

UPDATE: ‘Out of control’ fire at Eleven Mile Creek near Hope up to 35 hectares

Fewer homes for sale in Langley, but prices barely budge in July