Editor’s note: The story below may trigger difficult or traumatic thoughts and memories. The Indian Residential School Survivors Society’s 24-hour crisis line is available at 1-866-925-4419.

A fundraising initiative to purchase Indigenous history and cultural resources for the Fort Langley Elementary School library, by creating orange shirts with designs and language supplied by Kwantlen First Nation members, was a runaway success, with almost all of the more than 300 shirts selling in about a week.

Organizer Nancy Gleeson, a retired teacher librarian and kindergarten teacher, would like to see some less “wasp-y” books about First Nation history and culture purchased for beginning readers.

On the front, the shirt bore the school logo of a Coast Salish hawk design created by Kwantlen First Nation artist Phyllis Atkins and the message “every child matters.”

On the back was an image of an eagle feather and a person with hands raised, along with a message in the hənq̓ ̓əminə̓ m̓ dialect saying “we have a strong soul, spirit, and life force,” provided by KFN member Fern Gabriel. 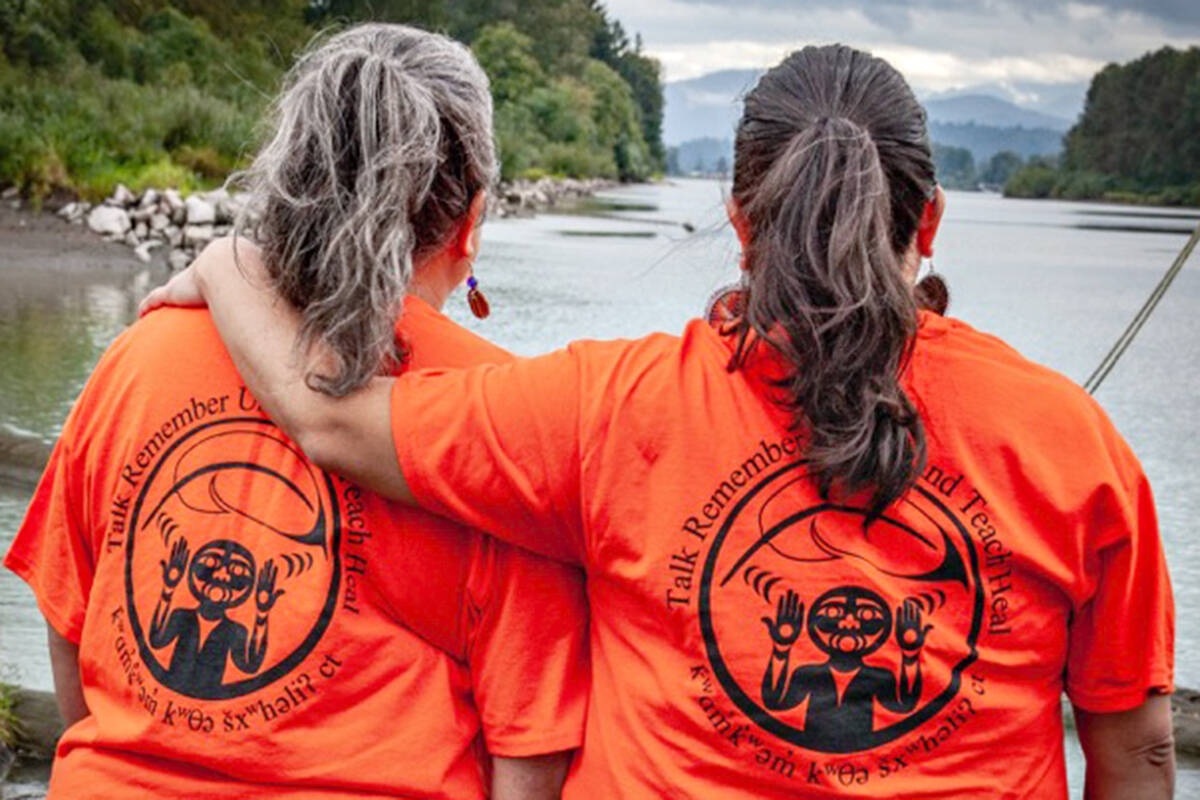 Fern Gabriel (left) and Phyllis Atkins of the Kwantlen First Nation model orange shirts for Truth and Reconciliation Day bearing the motto T.R.U.T.H. – Talk, Remember, Understand, Teach, Heal. More than 300 were made, and they were almost completely sold out in a week. (Byron Smith/Special to Langley Advance Times)

Orange Shirt Day was inspired by a residential school student, Phyllis Webstad, who recounted how, when she was six, her new orange shirt, bought by her grandmother, was taken from her.

Gabriel said she hoped personal stories will “give a face to the painful past and lead the children to compassion and understanding.”

Atkins explained the human figure was “raising his hands in a gesture that indicates thanks, respect, and acknowledges something or someone.”

“The figure is singing,” Atkins continued.

As well, the design incorporated the motto T.R.U.T.H. – Talk, Remember, Understand, Teach, Heal – the idea of Gleeson, who hoped the acronym will lead to discussion.

“As a society, we need to talk together, and let the Indigenous elders remember their experiences through sharing their stories,” Gleeson said.

“This will lead us to better understand the truth of their journey and our history.”

Parent Byron Smith, a designer who assembled the different elements, said when the school PAC decided on the orange shirt initiative, they felt it was “super important” to have involvement by the Kwantlen First Nation.

“That’s the land we live on,” Smith remarked.

Gleeson explained Orange Shirt Day, Sept. 30, now Truth and Reconciliation Day, “was the time of year that the children were taken from their homes.’

“It is a day for survivors, and all the following generations, to be reaffirmed that they matter. Every child matters, even the one buried inside the adult survivor.”

Canadians urged to donate one day’s pay to Indigenous groups on Sept. 30