UPDATE: Since the story ran, multiple sources have identified the insect as a June beetle, not a hornet.

It was hot out and St. Georges had left the screen door on his third floor balcony open for the breeze.

His unwelcome guest looked like a wasp, but an extra-large one.

It was about two inches long and looked very much like the invasive Asian giant hornets seen in the video, St. Georges told the Langley Advance Times.

“You never saw a guy get up so fast,” St. Georges laughed.

St. Georges managed to lure the intruder into his bathroom and closed the door.

On Tuesday morning, he deployed his shop vac to capture it, plugging the intake hose after vacuuming the bug up, to make sure it didn’t get out.

On Wednesday, St. Georges called the Invasive Species Council of B.C. to report the oversized insect, and gingerly removed the now-dead dust-covered bug from his vacuum using salad tongs to show it to a Langley Advance Times reporter.

St. Georges has done a lot of traveling, but this, he said, was a first.

“I’ve never seen anything like it,” the 53-year-old commented.

His advice to other Langley City residents, which he intends to follow himself, is to keep screen doors closed to ward off unwelcome insect visitors in future.

Invasive Asian giant hornets have been reported before in Langley and other B.C. communities as well as Washington State.

In May, Paul van Westendorp, the B.C. apiarist, reported that a specimen of Asian giant hornet was found in Langley Township, around 208th Street and 32nd Avenue in Brookswood.

It was the farthest east that the hornets have been found in B.C.

Previously, van Westendorp said, the giant hornets have been found around White Rock and along Zero Avenue

“The Langley find is an indication that this insect has spread farther than anticipated,” Westendorp said.

The typical hornet is between 1.4 and 1.6 inches (3.5 to four centimeters) while queens are up to two inches (five centimetres).

READ ALSO: ‘Murder Hornets,’ with sting that can kill, land in Washington State

Individual hornets are not considered a threat to humans, pets, or livestock, unless their nests are disturbed.

The hornets have 1/4 inch stingers and can deliver a painful sting.

– with files from Black Press Media 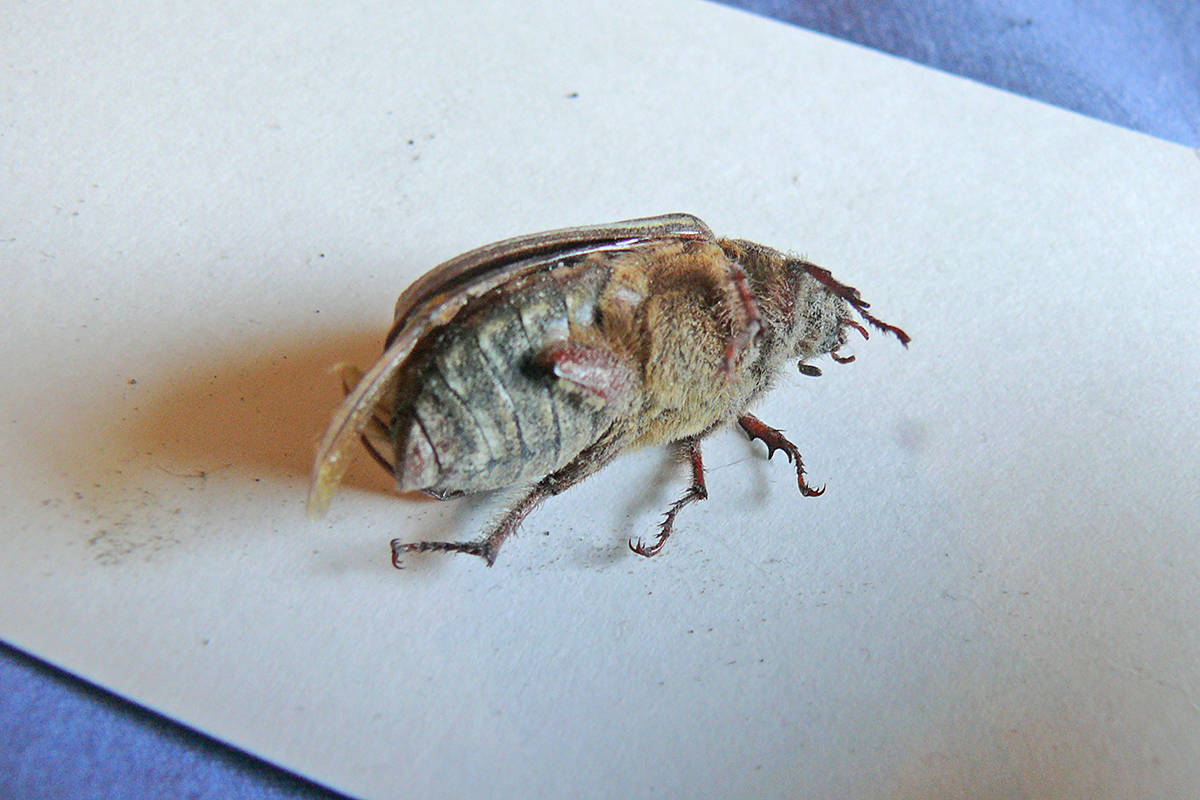 The insect that startled a Langley City man on Monday, Aug. 3, 2020, was big, measuring two inches. Multiple sources have identified it as a beetle. (Dan Ferguson/Langley Advance Times)