Before the Remembrance Day service began at the Fort Langley cenotaph, Brian Elidoros paid his parents and grandparents a visit.

His father, Theodore Elidoros, was a veteran of the Second World War, an RCAF flying officer who piloted the giant Canso Catalina flying boats, and so was his mother, Frances Mary, a private who performed in the army shows.

So too was his grandfather, John Harry Bleakley, a lance corporal with the 107th Infantry, who served in the First World War until a poison gas attack by the enemy sent him home.

His grandmother, Cathrine Mary, was not a soldier but lost her brother in the fighting.

His parents and grandparents share a carved headstone in the Fort Langley military cemetery.

As he does every year, Brian Elidoros put up photos of his relatives and laid out his dad’s flight jacket, with military medals, on the headstone.

“It’s a little thing I can do for them,” he told the Langley Advance Times.

Formerly a Langley resident, for the last few years Elidoros has made the trip from his new home in Salmon Arm along with some family members, and his dog, Zoey, who waited patiently by the headstone while he arranged the photos and jacket just so.

“They were great people, all of them. They served their country, [they] volunteered. Lots of their friends didn’t come back.”

At the service, a piper and colour party led a group of veterans, active members of the Canadian Armed Forces, clergy, RCMP, Air Cadets, firefighters, elected officials, Kwantlen First Nation elders, and Scouts and Guides to the cenotaph on Glover Road.

There was a flypast by members of the Fraser Blues formation flying team around the time two minutes of silence were observed.

This year, according to a Langley RCMP rough estimate, about 6,500 people attended the service at the cenotaph, “significantly” up from the previous year, when an estimated 5,000 turned out, said RCMP Cpl. Craig van Herk.

“It was a wall of people,” van Herk commented.

Volunteer Russell Townsend observed that “you used to be able to see grass,” previously, while it was “all people” this year.

Among them, 94-year-old Willoughby resident Michael Holley, who is not inclined to say much about his Second World War experiences as a member of an RAF air-sea-rescue vessel, the crews that would rescue downed pilots from the channel at considerable risk of being attacked by German fighters.

He came back with four medals, that he never wore, and shrapnel in one arm that he shrugged off as the result of an “air raid accident.”

He finally convinced his father to wear his medals this Nov. 11, even getting them professionally polished for the occasion.

“They came back on the Friday [before the Monday ceremony],” Andre related.

Remembrance Day organizers arranged to have a golf cart transport Holley and another older veteran to a reserved spot at the event. Applause rippled through the crowd as the vehicle passed.

A serious three-year-old from Willoughby, Tavian Crouch, was in the first row of viewers, watching the event unfold.

His mother, Donna Hancock, explained that her son appears to understand the significance of the cenotaph, which he refers to as “the cross.”

“His uncle is in the army,” mom added.

Master of ceremonies Jonathan Meads informed the audience that it was now 20 years since veteran Gord Gillard revived Remembrance Day in Fort Langley.

“[Gillard] walked into the Fort Gallery upset that nothing was happening here,” Meads related.

“[Gallery owner] Brenda Alberts joined him for an impromptu service of two that set about the resurrection of the service we attend today. Both Gord and Brenda have passed, but their efforts live on.”

Meads’ scout troop once again led a clean-up of the veterans headstones a few days before the ceremony.

READ MORE: ‘These kids are jumping at the opportunity to help out in their community’

There were considerably more volunteers this year, he noted.

“We were done in two hours.” 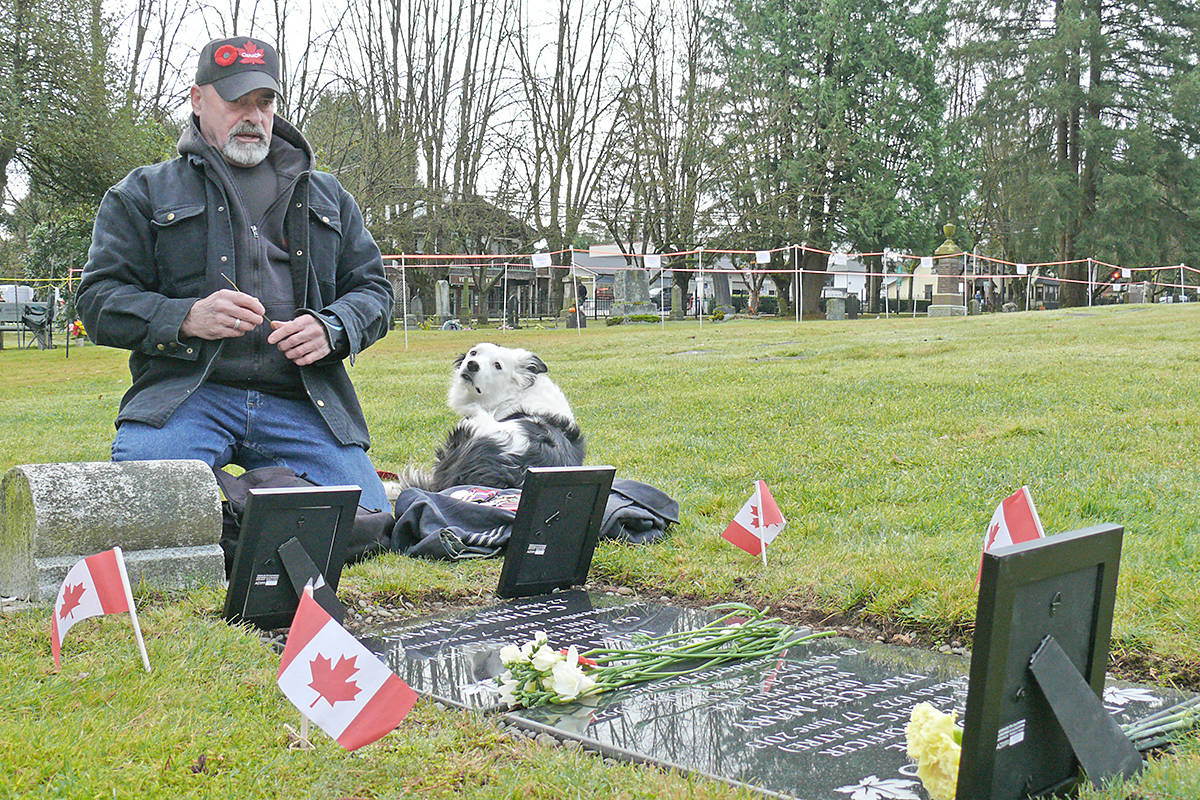 Before the Remembrance Day service began at the Fort Langley cenotaph, Brian Elidoros paid his parents and grandparents a visit with his dog Zoey at his side. (Dan Ferguson/Langley Advance Times) 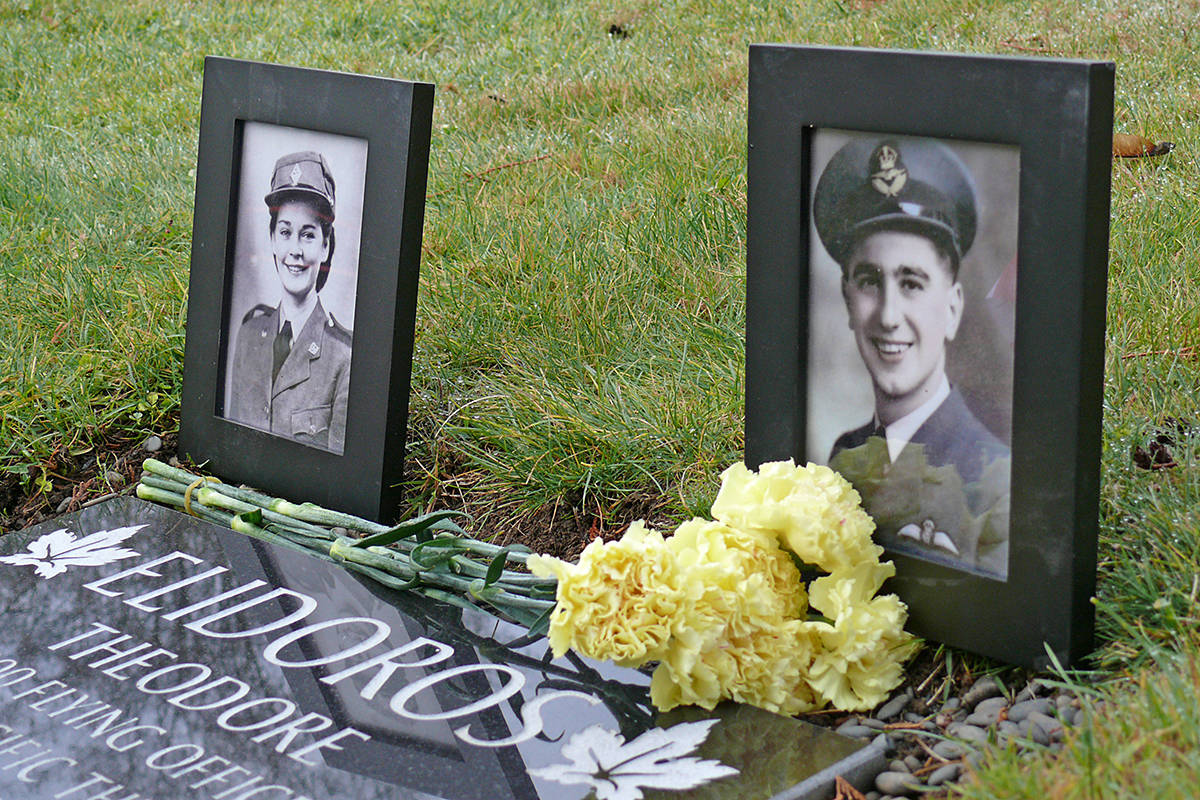 Brian Elidoros set up photos of his parents, both military veterans at the Fort Langley cemetery before the Remembrance Day service began. (Dan Ferguson/Langley Advance Times) 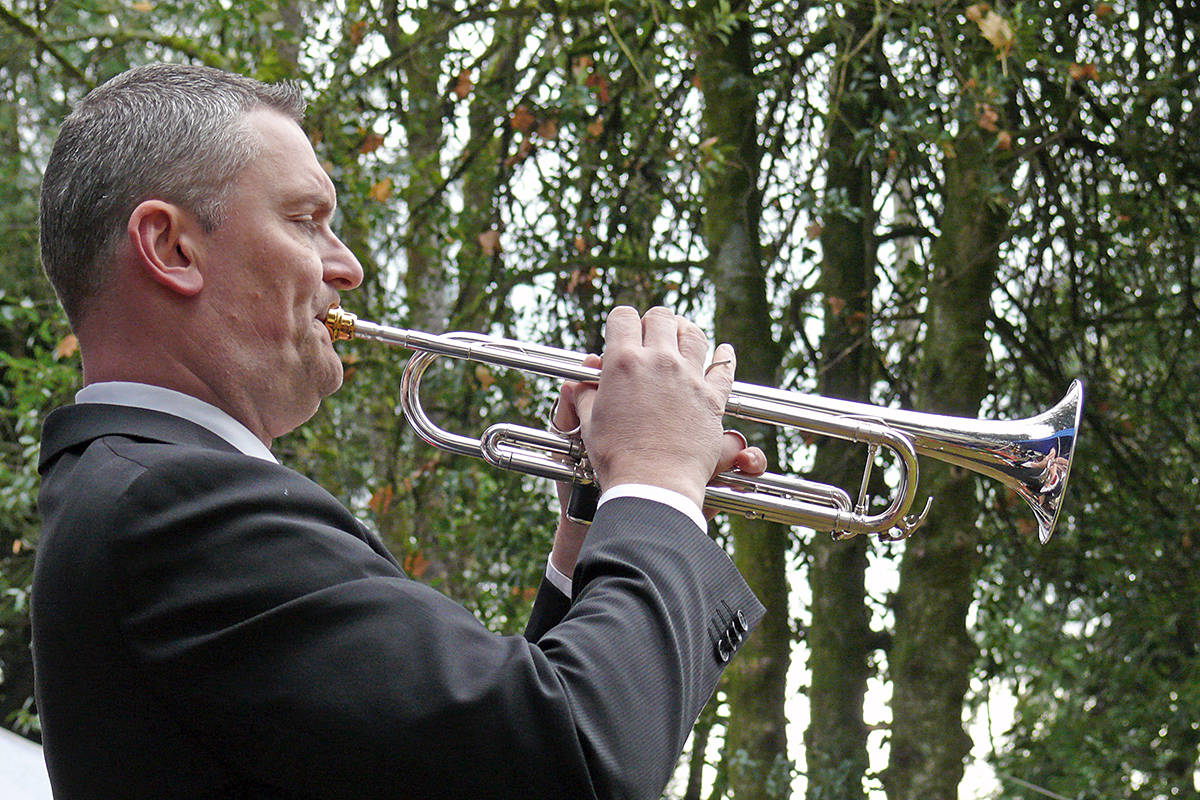 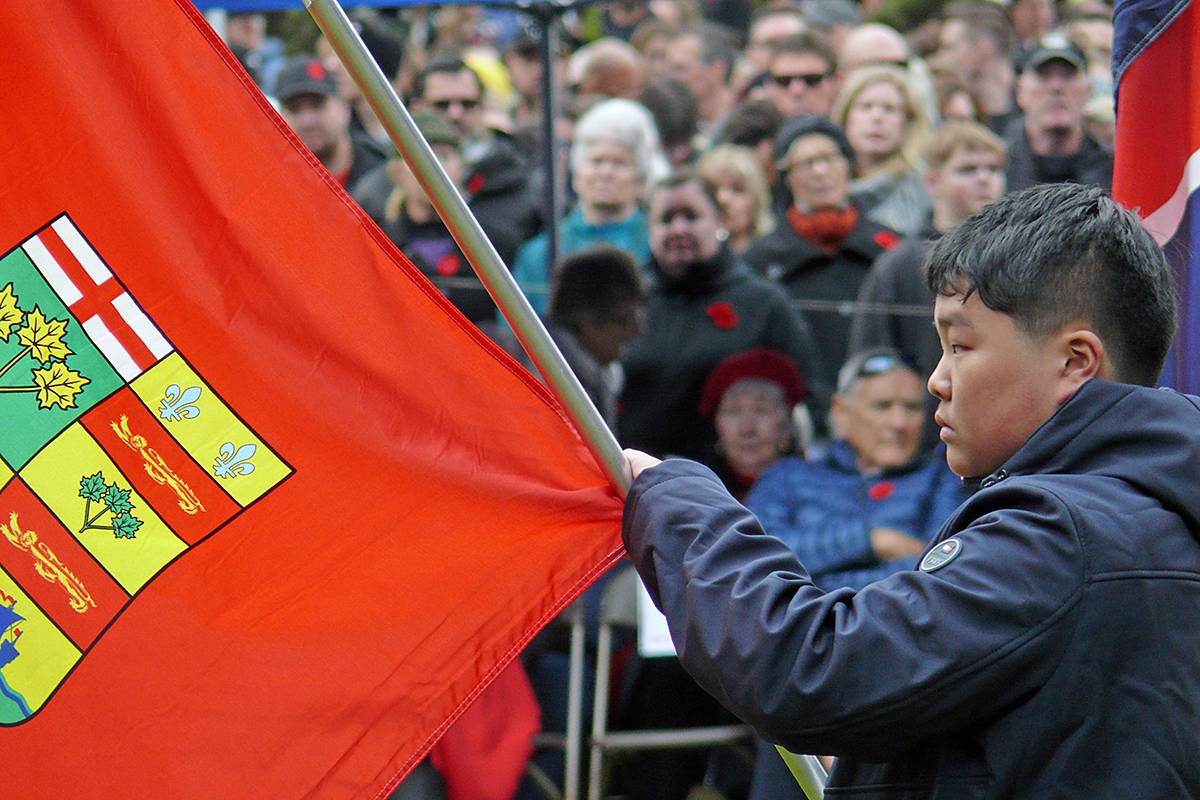 A young flag bearer was among the honour guard at the at the Fort Langley Remembrance Day service. (Dan Ferguson/Langley Advance Times) 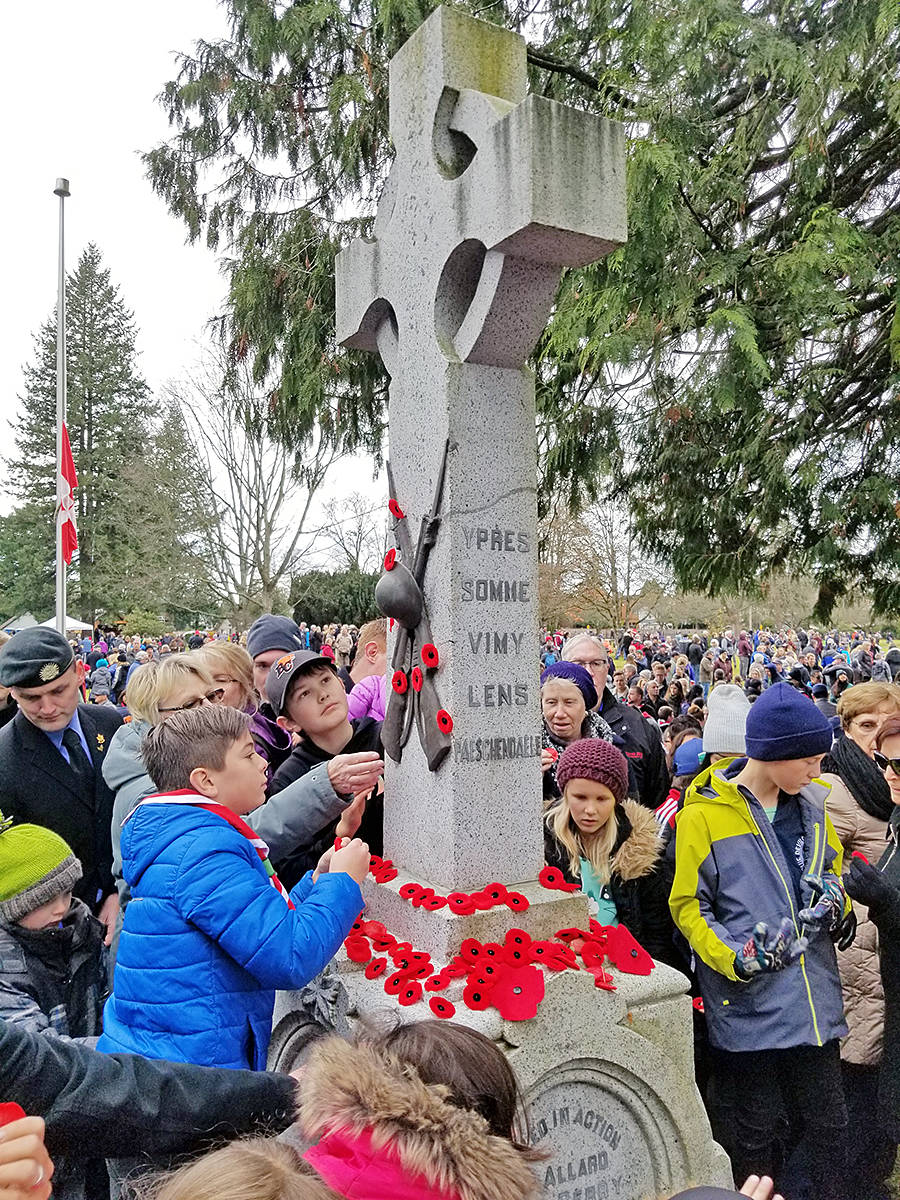 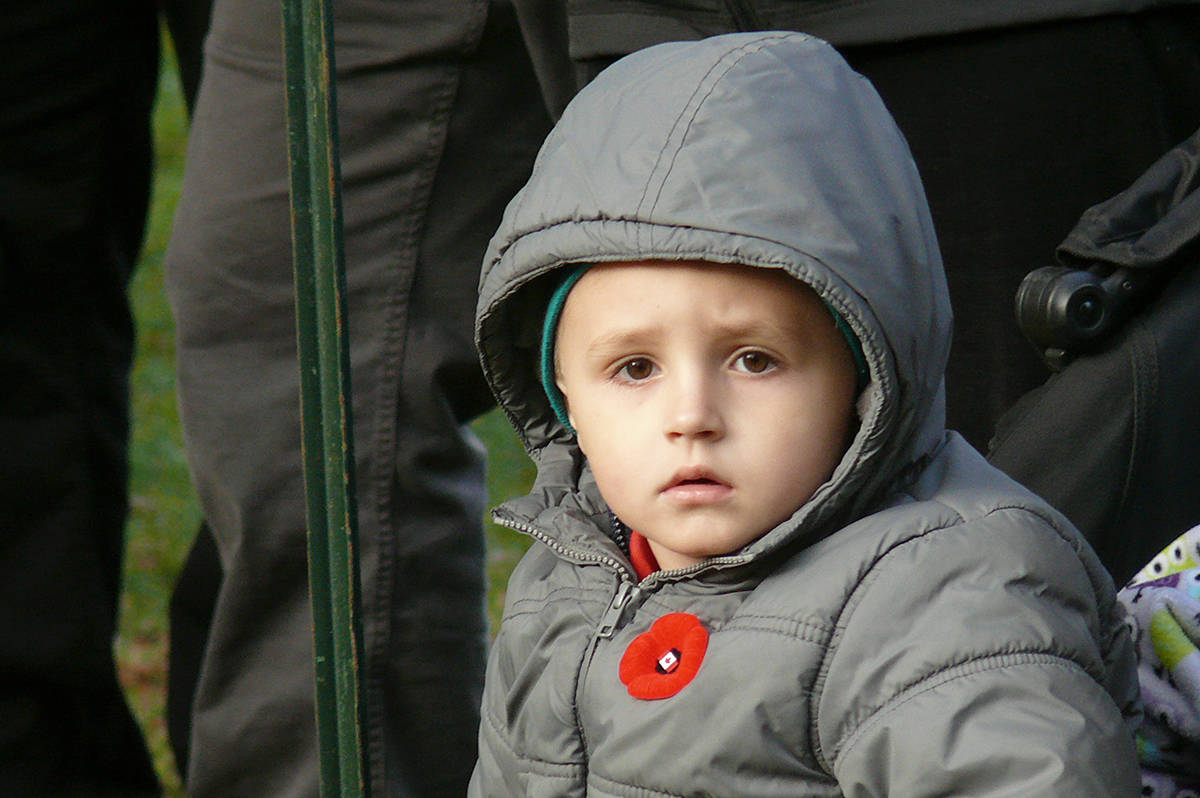 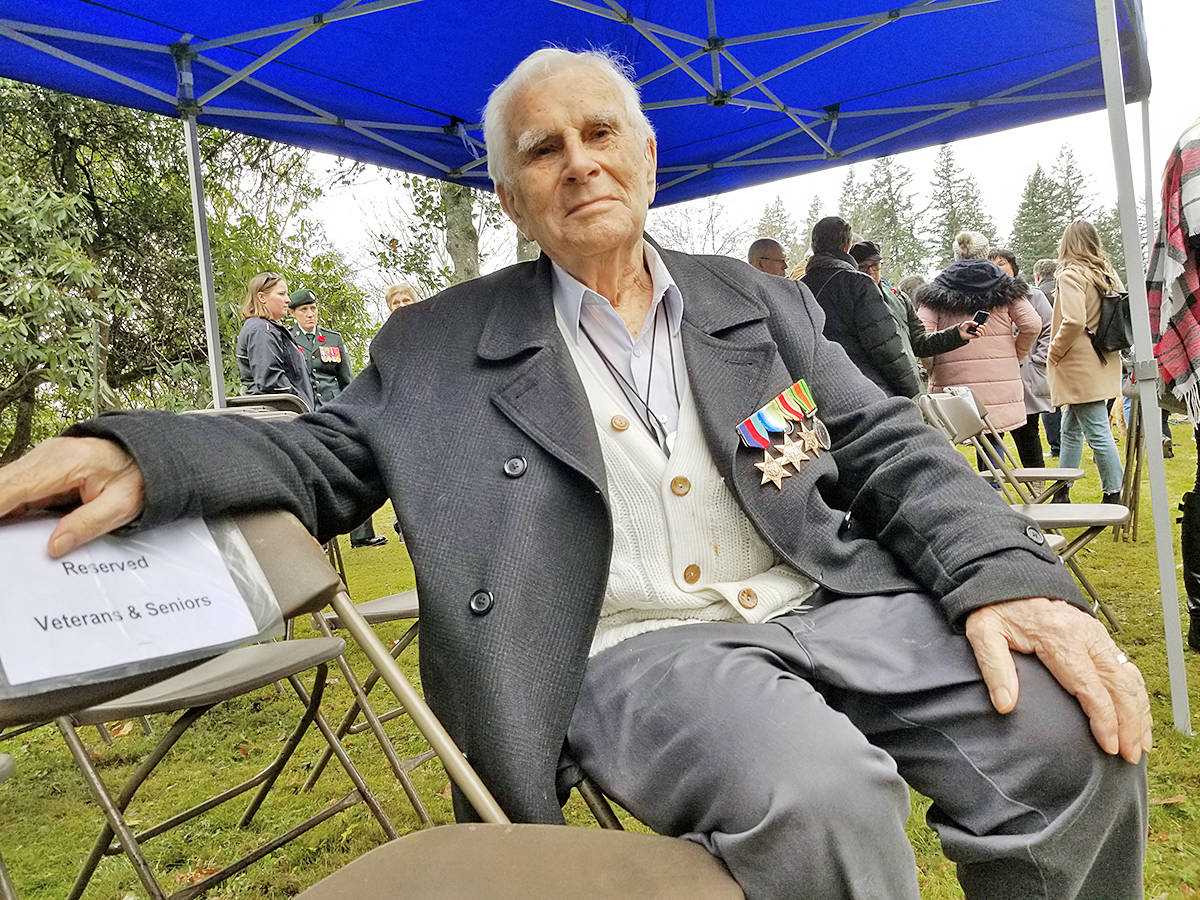 For the first time since he won his medals in the second world war, Willoughby resident Michael Holley wore them at the Fort Langley Remembrance Day service. (Dan Ferguson/Langley Advance Times) 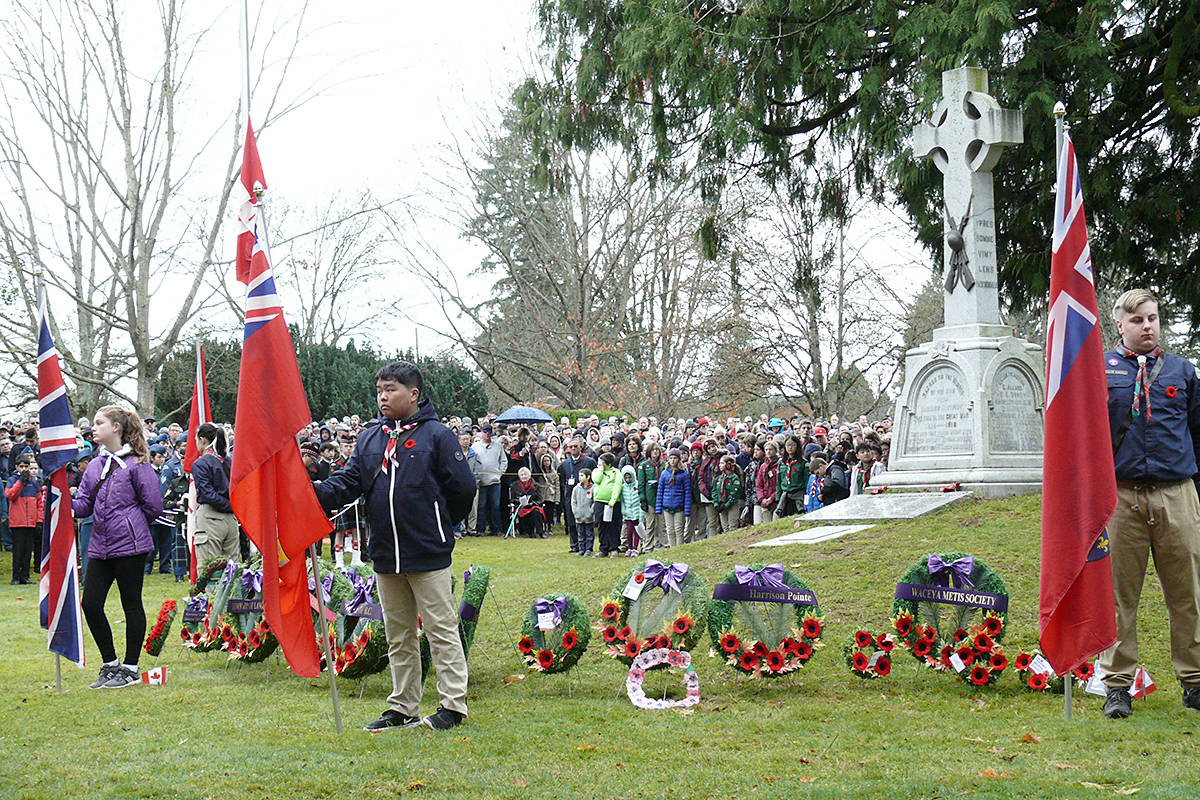 Trudeau’s opponents: One gives him an earful, another seeks common ground