A development that’s being touted as the first of its kind in Western Canada is coming to Brookswood.

With an anticipated opening of early 2019, The Village will be Metro Vancouver’s first private memory care village.

To give residents a preview of what’s coming, a neighborhood open house is being held Thursday, Oct. 19 from 5 to 8 p.m. at the George Preston Recreation Centre.

“Based on the dementia village model first established in Europe, and backed by years of evidence-based research, The Village will be the first private memory care community of its kind in Western Canada,” it’s noted on The Village’s website (www.thevillagelangley.com).

The Village’s residents will live in their own home within one of six, single-storey cottages situated on a nearly seven-acre site where the former Bradshaw Elementary was located.

The website says the residents will live in a “real village” with a community activity centre, grocery store, salon and spa, art spaces, workshop areas and cafe with a fireside lounge.

“Supported by teams of highly trained staff, the 76 residents will have free access to the park-like outdoors, which includes five acres of landscaped gardens and pathways, a vegetable garden, pet therapy centre and duck pond, all within a secure and supportive environment,” it’s noted on the website.

Project leader Elroy Jespersen of Verve Senior Living said people with dementia often have to move to another community due to symptoms related to the disease.

“We didn’t have an appropriate place for people to go to,” Jespersen said. “We began looking for a community (where) we could build (The Village) that had a bit more property, that allowed people to move about freely without being constrained in a building. When we discovered the Bradshaw Elementary site for sale a year-plus ago, we put in an offer in Langley.”

“To our knowledge, there is no other place in Canada that has all the components, and by components, we’re talking about the physical environment, the philosophical approach, and the type of staff support we have,” he said.

Twelve people will live in each of The Village’s six cottages.

“There are other places that might have a little cottage but none of them create this village,” Jespersen said.

The heart of The Village is the community centre that is anticipated to be a meeting place for residents and their family and friends.

“That’s where the life happens,” Jespersen said. “People can wander up there and go for a coffee or participate in an activity.”

Dedicated teams work in each cottage, primarily. “They get to know the (residents) really, really well, so they can anticipate what their needs might be, what their interests are, any concerns, so the quality of life that we can help a person achieve is much more enhanced than a typical care place,” Jespersen said.

Jespersen believes The Village will be attractive to someone diagnosed with dementia who need more support than they are currently able to get in their home or “in another environment.”

However, The Village isn’t just for dementia patients, Jespersen stressed. “Any person who values more support, more physical assistance, would qualify. Two of the households initially will be licensed for complex care… but the other households will be registered for assisted living which is less intense care.”

The site is already zoned institutional, Jespersen said: “That was very attractive, so when we went to talk to the people at the (Langley) Township, they were very supportive. We explained what we wanted to do, so now we’ve been into the Township for our building permit for the past month-and-a-half.”

Jesperson is confident that a building permit will be issued from the Township “within the next two to three weeks.” 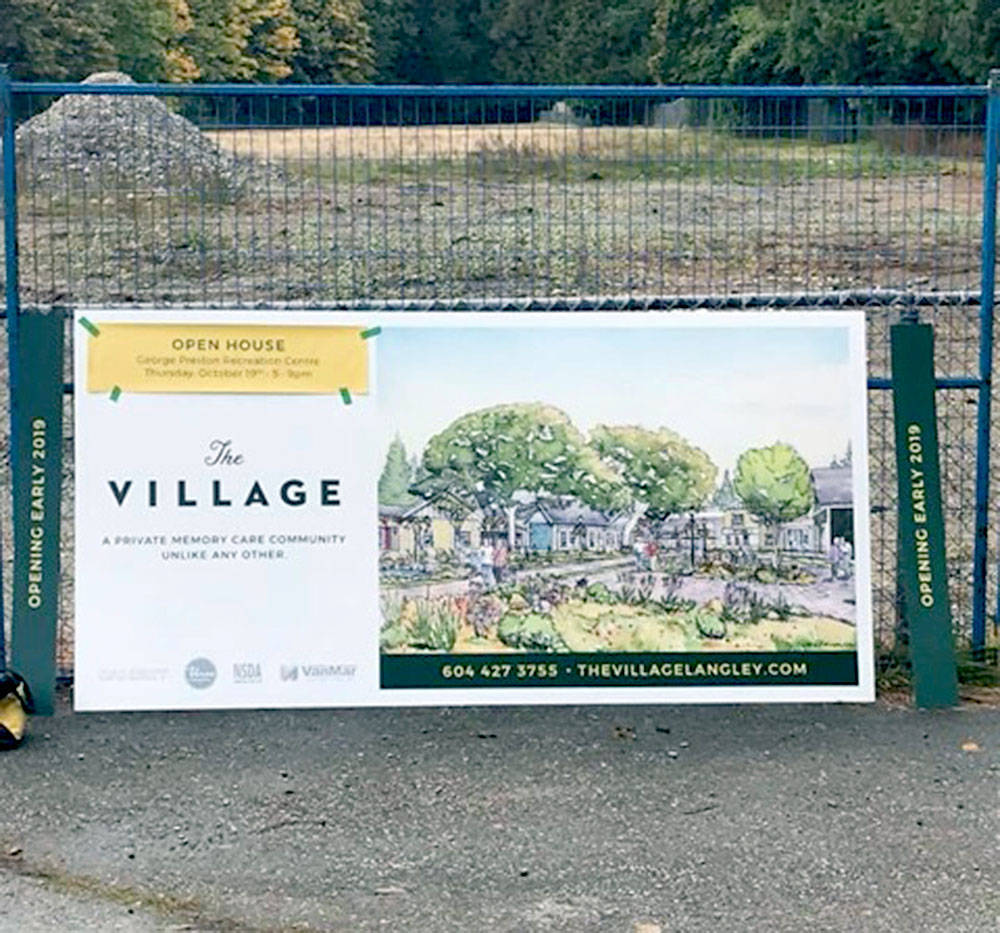 Signs for The Village are up at the former site of Bradshaw Elementary School. Shelby Eckford photo