After years of battling to legalize marijuana, activist Randy Caine wants a permit to sell it in Langley Township under new laws that allow recreational use.

But his application to sell marijuana from his Hempyz store has hit a snag, Caine said, the result of what he believes to be foot-dragging by the municipality.

“My sense of it is, we’re going to have some problems moving forward,” Caine said.

A spokesperson for the Township said the municipality is proceeding with caution because there is little precedent for regulating marijuana selling.

Staff are researching the issue, said Bill Storie, senior advisor to council, and expect to make a presentation to council later this month.

Caine, a long-time campaigner to make marijuana legal, filed an application with the provincial Liquor and Cannabis Regulation Branch that proposes selling marijuana products from the Hempyz shop he operates in the Langley Crossing Shopping Centre at 19925 Willowbrook Drive.

READ MORE: A taste of his own medicine for Langley marijuana advocate

For years, Hempyz has sold hemp- and marijuana-oriented items, but not the actual product, something that was not allowed until the federal government amended the laws to allow recreational use in October of 2018.

“It definitely is a change,” said Caine.

Under provincial law, an application for a non-medical cannabis retail store (CRS) licence can’t be issued by the branch without a positive recommendation from local government, in this case, the Township.

Caine said after he filed his application, he was advised that the Township wouldn’t be making a recommendation right away.

An email from the branch to Caine said Township staff advised they have “not yet received direction from Township council concerning the processing of non-medical cannabis retail store applications” and council was not expected to consider the matter until later in the year.

It advised Caine the branch does not hold applications and offered to refund his filing fees if he withdrew his application before the required background review, financial checks and security screening are carried out.

“Municipal governments need to understand that that they can’t ban pot sales, only regulate them,” Caine said.

“What they need (municipalities) to do, is they need to come up with fair, honest accessible regulations for the community and stop dragging their feet.”

Caine said the longer legal stores are delayed, the longer criminal elements will be selling marijuana.

“Each day that we don’t move forward, we are aiding and abetting organized crime,” Caine said.

In response to a query by the Langley Advance Times, Storie said Langley is like most local governments in Canada, who want to figure out the best way to handle pot sales.

“I think that all municipalities are going to take their times and do it [regulate marijuana sales] as well as possible,” Storie said.

Storie said there are a number of different ways the municipality could handle applications to sell marijuana, such as zoning restrictions to keep the businesses away from schools.

Staff are researching the matter, Storie said and will be making a presentation to council that has been tentatively scheduled for May 27.

So far, there have been only two applications to open a CRS in Langley, the one from Caine and a second by a different party in Murrayville.

Caine said he applied to licence his Township store, but not the other Hempyz he operates in Langley City, because he wanted to see how the process works.

Caine was charged, but not convicted, of drug trafficking in July of 2011 when his legal medical marijuana dispensary in Langley City was raided by the RCMP.

The charge was dropped in June 2013 when Caine pleaded guilty to less serious violations of exceeding the amount of marijuana he was allowed under his Health Canada licence and of storing it improperly. 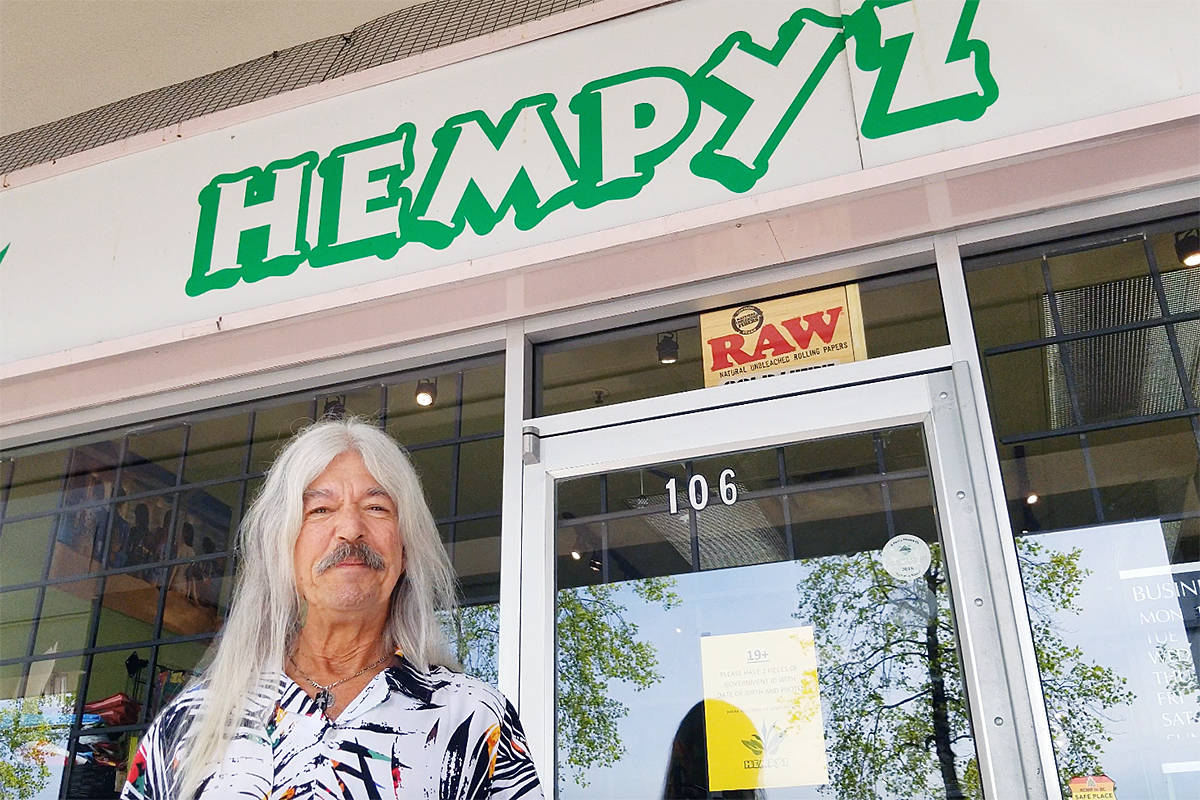 Caine said he applied to the Township instead of the City of Langley to see how the process for obtaining a permit to legally sell marijuana works. Dan Ferguson Langley Advance Times