Some B.C. drivers are facing longer-than-usual waits to get snow tires because the COVID-19 pandemic has disrupted deliveries and manufacturing, according to dealers who spoke with the Langley Advance Times.

Brett Delaney, co-owner and manager of OK Tire in Langley said normally the store would have an “abundance” of winter tires.

Now, the wait for some popular brands and “not-so-popular sizes” has been as much as six to seven weeks, Delaney estimated.

There has also been a “spike” in demand that appears to be driven by “snowbirds” who are staying in Canada this year rather than heading south to the States for the winter, Delaney added.

“It has been interesting,” he commented.

Delaney expects the situation should have returned to normal by “early to mid-spring,” but in the meantime, he advises drivers to book sooner rather than later if they want tires.

“We’re booking a week, week-and-a-half ahead.”

Steve Stayner, owner of B & B Tireland, described the situation as a “total nightmare.”

He said because many tire makers shut their factories down in March for two weeks or more as a precaution during the early days of the pandemic, production has backed up and winter tires are being shipped later than usual.

Stayner added most customers have been booking two to three weeks in advance, rather than dropping in, due to COVID concerns, something that allows staff time to track down needed sizes, if they aren’t already in stock.

“It depends on the size and the brand,” Cox explained.

“A lot of manufacturers are running behind schedule,” Cox observed.

Tire companies in Asian markets like China and Korea have been especially hard-hit by shipping disruptions.

At Country Tire in Langley City, owner Howie Wirsch has noticed a difference, but didn’t think it was all that unusual.

“Some sizes are getting picked over,” Wirsch told the Langley Advance Times.

Not that everyone will be installing new snow tires.

Roughly one in 10 Canadian drivers opted to leave their winter tires on through the summer because of COVID-19, and one in six were waiting longer to get snow tires installed, according to a national survey by the KAL tire chain.

Bad idea, according to Kal Tire regional director for urban retail stores Mike Butcher, who warned running winter tires through the summer can “significantly” reduce tire life so “there might not be enough tread depth or grip for safe winter driving.”

B.C. drivers were most likely to keep their winter tires on over summer at 18 per cent, followed by Alberta at 15 per cent and Manitoba at nine per cent

Winter tires or chains are required on most routes in British Columbia from October 1 to April 30. For select highways not located through mountain passes, tire and chain requirements end March 31.

Drivers caught without proper winter tires – which must also be in good condition – face a $109 fine. 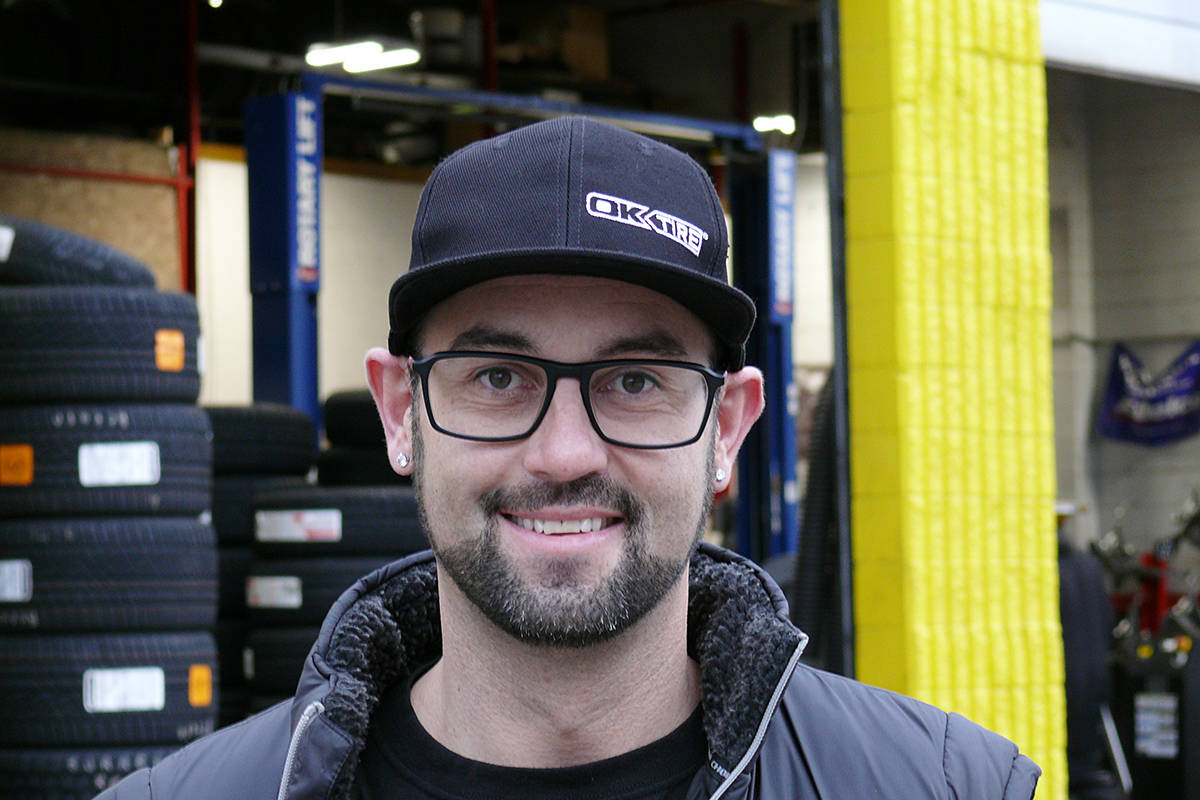 Brett Delaney, manager and co-owner of OK Tire in Langley, was on-site on Tuesday, Nov. 17, 2020. Delaney and other tire businesses are reporting delays in getting winter tires due to COVID-19 plant closures and delivery disruptions (Dan Ferguson/Langley Advance Times)