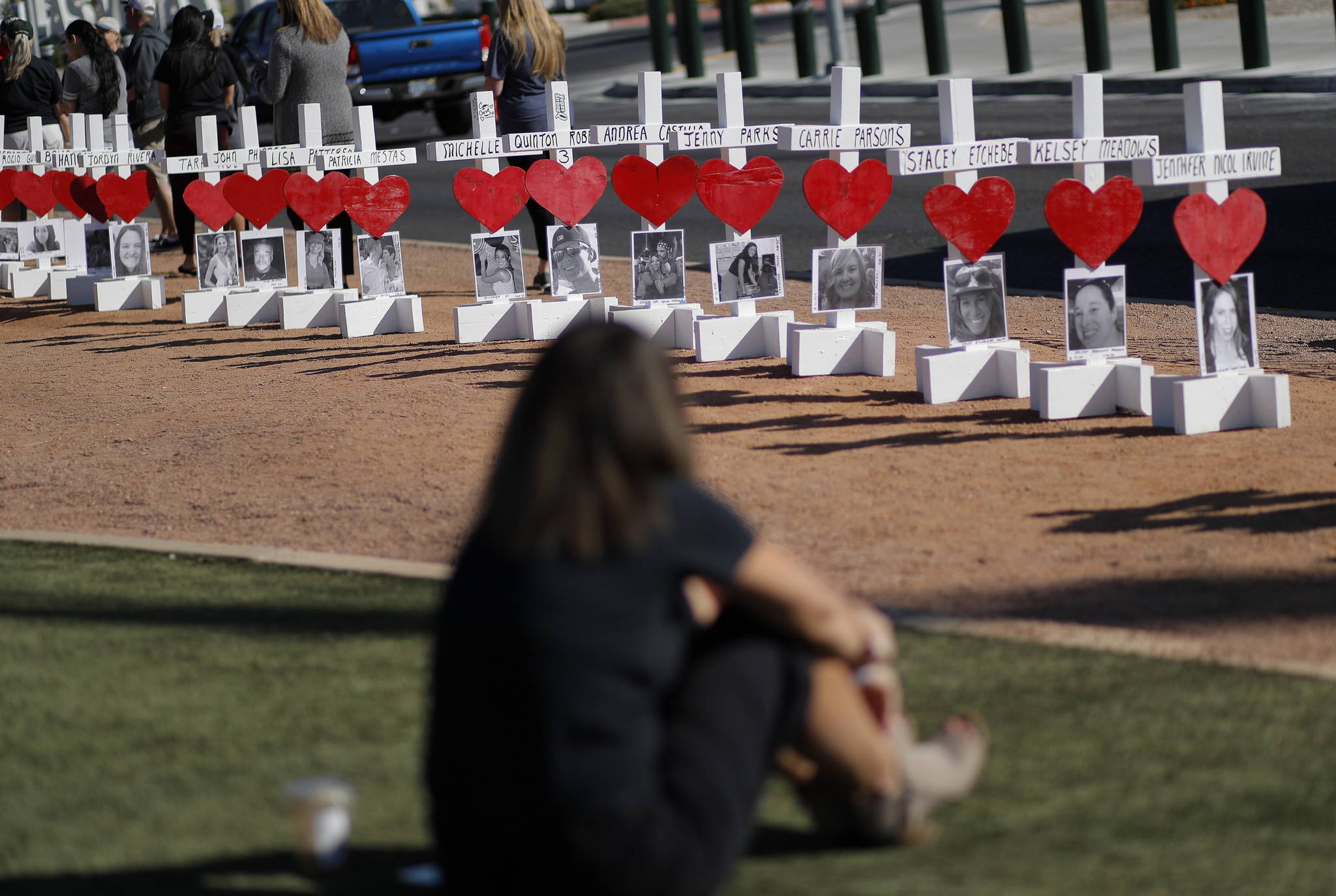 People visit a makeshift memorial for shooting victims, Tuesday, Oct. 1, 2019, on the anniversary of the mass shooting two years earlier in, Las Vegas. “Something we all learned that night is no one’s a stranger,” said Dupin, about the people she met who helped each other during the shooting at a country music festival. “It brings out the best in you.” (AP Photo/John Locher)

From a sunrise event to a reading of victims’ names at the time the bullets flew, Las Vegas on Tuesday was marking two years since the deadliest mass shooting in modern U.S. history, with memorials to the 58 people killed at a country music festival.

“No anniversary is more terrible than the one that recalls how your neighbours and guests were so wantonly slain, even while their hearts were singing out in joy as they listened to music with their friends and loved ones,” Joe Robbins said.

The father of 20-year-old Quinton Robbins told a daybreak audience of hundreds about his son, a city recreation worker who died when a gunman rained gunfire from a high-rise hotel into a crowd of 22,000 on Oct. 1, 2017.

“None of us want those who lost to be forgotten,” Joe Robbins said.

Nevada Gov. Steve Sisolak recalled cellphones ringing as he joined officials walking the shooting scene the morning after the massacre.

“Many that would never be answered,” he said.

Two years ago, Sisolak led the county commission that oversees the Las Vegas Strip, where a concert turned to horror as people suddenly dropped — bleeding — ran to escape the spraying bullets and tried to save people they loved.

“Beyond the neon signs, we are a city of neighbours that look out for each other,” the first-term governor said.

The memorial audience was smaller than last year, but emotions were still raw for Al McIldoon, father of Jordan McIldoon, a 23-year-old from Maple Ridge, who died in the shooting.

“We feel the need to be here for our son,” he said.

He, his wife, Angela McIldoon, and their friend Paul Poteat of Las Vegas wore matching NHL Vegas Golden Knights jerseys, No. 58, with the name Jordy Mac on the back.

Steve Darling and Judy Gardner of Ontario, California, wore T-shirts with the name of Judy’s daughter, Dana Gardner, a 52-year-old mother of three enjoying the music with her own daughter when she died.

They said they planned to join hands with survivors and other families of victims at the concert venue across the Las Vegas Strip from the Mandalay Bay resort-casino, where the shooter unleashed his attack.

MGM Resorts International, owner of the hotel and the venue, has announced plans to convert the now-shuttered concert space to parking while it plans a community centre and a place to remember victims.

Darling and Gardner said they already visited a community healing garden, where Las Vegas Mayor Carolyn Goodman planned to read the names of the victims at the time the gunfire rang out: 10:05 p.m.

Greg Zanis, who made wooden memorial crosses with victims’ names and photos, put them up again at the iconic “Welcome to Fabulous Las Vegas” sign.

The shooting lasted nearly 11 minutes before gunman Stephen Paddock killed himself as police closed in. Police and the FBI found the 64-year-old retired accountant and high-stakes video poker player meticulously planned the attack, and they theorized that he may have sought notoriety. But they said they never found a clear motive.

Police recovered 23 assault-style weapons, including 14 fitted with bump stock attachments that allow firearms to fire rapidly like machine-guns. The Trump administration banned the devices in March.

Nevada and some other states have tightened gun laws in the two years since the shooting, including passing “red flag” measures that allow a judge to order weapons be taken from someone who is deemed a threat.

Efforts to combat gun violence follow other recent mass shootings, including at a Florida high school last year that killed 17 and attacks in Texas and Ohio that killed 31 people in one weekend this summer.

“It’s a shame that it takes more and more of these shootings to bring attention to a topic,” said Liz Becker, a volunteer with the gun control advocacy group Moms Demand Action.

But “I do think that the tide is turning,” she said.

Aldergrove FreshCo gears up for grand opening next month