Jacob Bredenhof “grit his teeth through the pain and the rain,” his mother Tracey Bredenhof says.

But he did it.

The cancer survivor and amputee biked the 105-km trek from Abbotsford to Hope on Sept. 19, just one day before the official Terry Fox Run date. He did it with determination, and with Terry’s brother Darrell Fox alongside him all the way. By the end of the ride, his team had collected nearly $90,000 in donations for cancer research.

The entire ride, dubbed Pedal of Hope, was chronicled throughout the day on Facebook, with posts from the beginning, along the road, at pit stops, and finally at the end in Hope. Hours later, his mother beamed with pride online about her son’s accomplishments.

“Absolutely incredible and inspiring and heart warming,” she said.

Jacob finished treatment for osteosarcoma a year and a half ago, which included a partial leg amputation and chemotherapy. His mom recalls how at times they weren’t even sure he would survive the treatment, let alone go on to accomplish something so difficult.

His team comprised more than a dozen riders. They left from Terry Fox elementary school in Abbotsford, and then meandered through the back roads south of the highway toward Greendale, and then Chilliwack. They rode along back roads and smaller highways all the way, taking the Lougheed from Agassiz to Hope. Along the way, they were joined by others on two wheels, too. Others rode different areas throughout the lower mainland in support of the ride, as well.

And every portion of the trip came with heartwarming moments, described in his mom’s post. There were people cheering along the route in places, friends and family at rest stops, and even two girls holding posters who were in treatment at the same time as Jacob.

There were strangers honking in support, and old friends who showed up. The Yarrow Fire Hall showed their support by following the team for some time.

The riders carried the name of another young person, Cameron Bulger, who has passed away due to cancer.

And for the last leg of the ride, the hardest, Jacob’s 70-year-old grandfather joined them.

All of this began when a bike was given to Jacob by Cranky’s, as a way to get around quickly rather than limping or using crutches. The Pedal of Hope ride also lined up the 40th Anniversary of Terry’s Marathon of Hope (Sept. 20). He had been training since June.

Abbotsford’s Jacob Bredenhof was diagnosed with the same cancer as Terry Fox in 2018. This year, he rode alongside Darrell Fox and raised nearly $90,000 for cancer research. Here, they pose before the 105-km ride from Abbotsford’s Terry Fox elementary, to Hope. (Submitted photo) 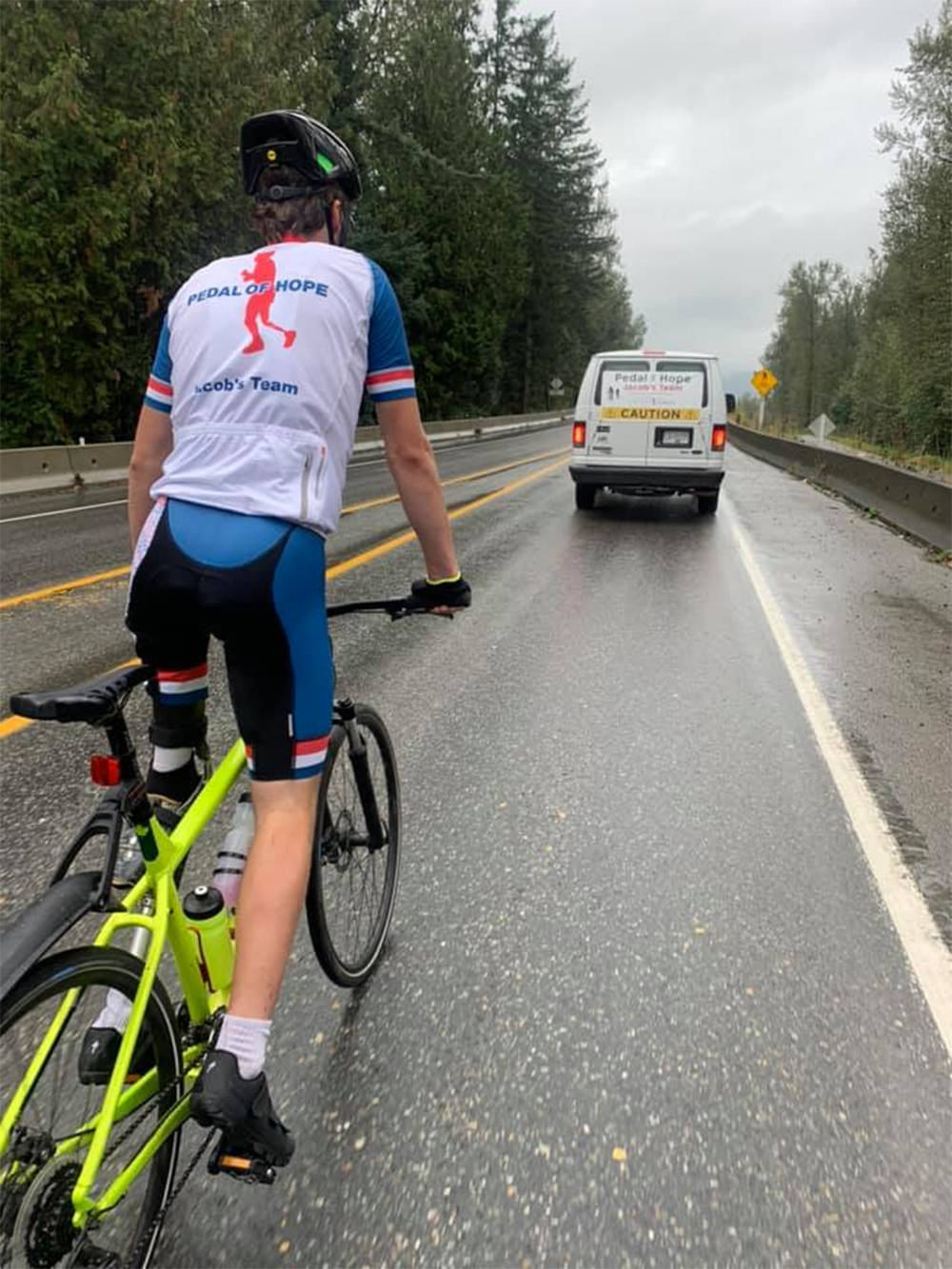 Jacob Bredenhof follows a support van along a wet stretch of highway on Sept. 19, 2020 for his ride, Pedal of Hope. (Submitted photo)