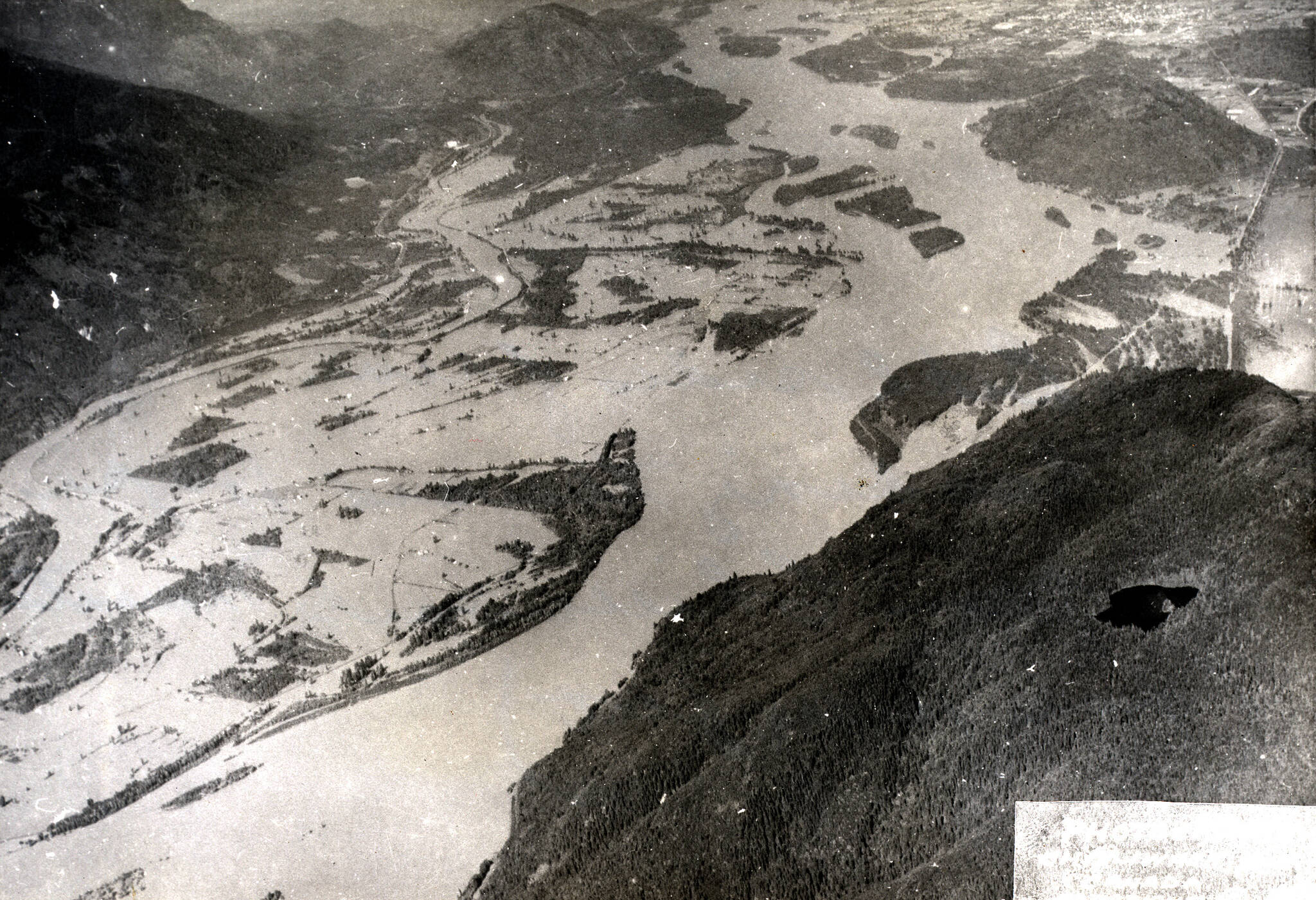 An aerial view, without horizon, of the Fraser River and part of Sumas Mountain, during the 1948 Fraser River flood. Nicomen Island is seen inundated with flood water at top centre in image. Chilliwack Mountain is visible at top right (1948). (Photograph courtesy of the Chilliwack Museum and Archives P669).

It’s the wetlands and tidal shorelines – the places too soggy to be considered land, not damp enough to be navigable by anything bigger than a paddleboard.

Even here in Langley, the Fraser River is tidal, rising and falling on a regular cycle, cresting higher for spring tides and lower for neap tides.

Once you start poking around in the parts of this territory that are accessible to humans – at least those without hip waders – you realize that there used to be a lot more of these lands.

Travel north on 208th Street out of Walnut Grove, and you’ll pass over the dikes that were built decades ago to keep out the water.

Much of central Abbotsford used to be a vast shallow wetland, Sumas Lake, until it was drained in the early 1920s.

Richmond, including Lulu Island, Sea Island, Iona, and Mitchell are all guarded by dikes and pumps and fill.

I’ve lived in the Lower Mainland my whole life, and I’ve only realized piece by piece that the biggest change we’ve made to the landscape wasn’t cutting down the forests and replacing them with farmland, it wasn’t building cities and suburbs, it was the way we’ve fenced off the water from the land.

It didn’t used to be that easy, to tell where one ended and another began.

The thing about water is, it’s going to get in eventually. And I don’t mean that all these engineering projects are bound to fail in the near future (although sea level rise and global climate change and the storms it brings certainly seem to be trying to give them a run for their money).

But those islands and sandbars and wetlands were carved out by a river that’s been here since the glaciers melted 10,000 years ago. That’s the time scale we’re talking about. We can build dikes and causeways, and bring in truckloads of fill, but eventually, maybe long after we’re all gone, there’s going to be a storm, or a flood, or a king tide backed up by a typhoon. And then a lot of what we have built is going to be swept away.

Off the coast of Egypt, underwater archaeologists have spent the last couple of decades going down with scuba gear to study Heracleion. It used to be one of the biggest ports on the Mediterranean. But it was built on a collection of islands in the Nile estuary. Eventually, it was hit by tsunamis and flooding and quakes, and the sea level rose, and the people left, and the city sank, temples and statues and all.

I’ll just bet you 2,000 years from now, there’ll be some interesting undersea archaeology to be done in Richmond, and Sumas, and maybe even Fort Langley.

LETTER: Langley senior doesn’t back down from rude pickup driver

Our View: Many never come home from war