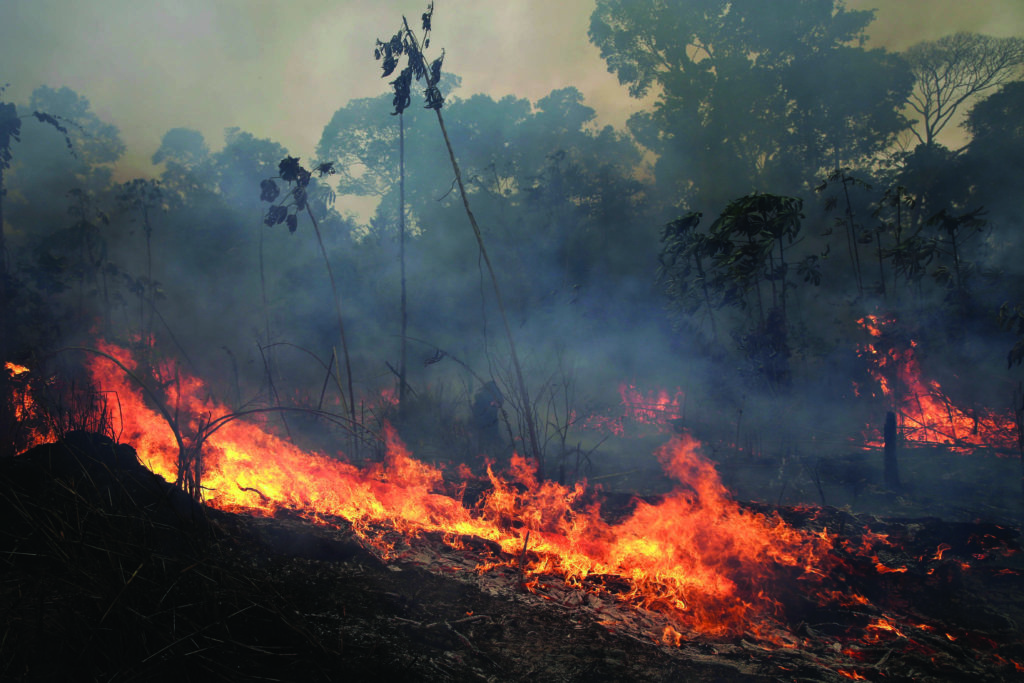 A fire burns along the road to Jacunda National Forest, near the city of Porto Velho in the Vila Nova Samuel region which is part of Brazil’s Amazon, Monday, Aug. 26, 2019. The Group of Seven nations on Monday pledged tens of millions of dollars to help Amazon countries fight raging wildfires, even as Brazilian President Jair Bolsonaro accused rich countries of treating the region like a “colony.” (AP Photo/Eraldo Peres)

We are at the mercy of a pack of narcissistic idiots, and it’s going to get us all killed.

The most recent example of our imminent doom comes from Brazilian President Jair Bolsonaro, who initially refused to accept $20 million in funding to fight forest fires from the G7 until France’s President Emmanual Macron apologized for an “insult.”

Macron had accused his Brazilian counterpart of lying about climate change commitments during trade negotiations between the EU and the South American trade block, Mercosur.

Finally, after a few days of this nonsense, Bolsonaro agreed to accept millions of dollars in money for firefighting and restoring the rainforest. As if he was doing everyone else a favour.

The Amazon rainforest, lest you forget, is burning at an unprecedented rate, after decades of degradation by clear cutting and slash-and-burn agriculture. Might be nice to have all those trees and jaguars and tapirs and rare plants and so on. But if the president feels insulted, well. What are a few million acres of forest?

This is what our world is right now.

It’s a bunch of thin-skinned idiots who will put their personal pride before any other consideration, even the destruction of whole ecosystems.

I really try to go many months at a time without mentioning Donald Trump, but he’s the elephant in the room in this case.

He isn’t the first absurd egotist to take office in the past few years, or decades. But he is by far the most powerful, an example unto the others of just how venal, selfish, and stupid you can be and still get elected to high office.

These men – and they’re mostly men, though I wouldn’t rule out a couple of women from getting in on the act before we’re done – are making every problem we face as a planet worse.

And yet the big issues instead are a spat over the idea of the United States buying Greenland, like it was a used Nissan.

First of all, it apparently began as more-or-less idle musings by Trump to some of his staff.

But when it was publicized, and then immediately mocked as a ridiculous idea – no one had asked the citizens of Greenland, of course – Trump got his back up.

He canceled a state visit to Denmark. He took potshots at the Danish prime minister. His toadies suddenly started writing op-eds about how buying Greenland was a great idea, actually, despite this plan being on exactly no one’s radar a week before.

This is the pattern. It’s governance by petty grievance, by tantrum, by bluster and stupidity, on behalf of the fractional plurality of voters just as petulant as they are.

These guys aren’t fiddling while Rome burns. They’re arguing about who gets to hold the violin. Big talk and not even music as everything goes up in flames.

Our View: Human infrastructure as vital as buildings

What does ‘We are all treaty people’ mean, and who speaks for Indigenous students on campus?