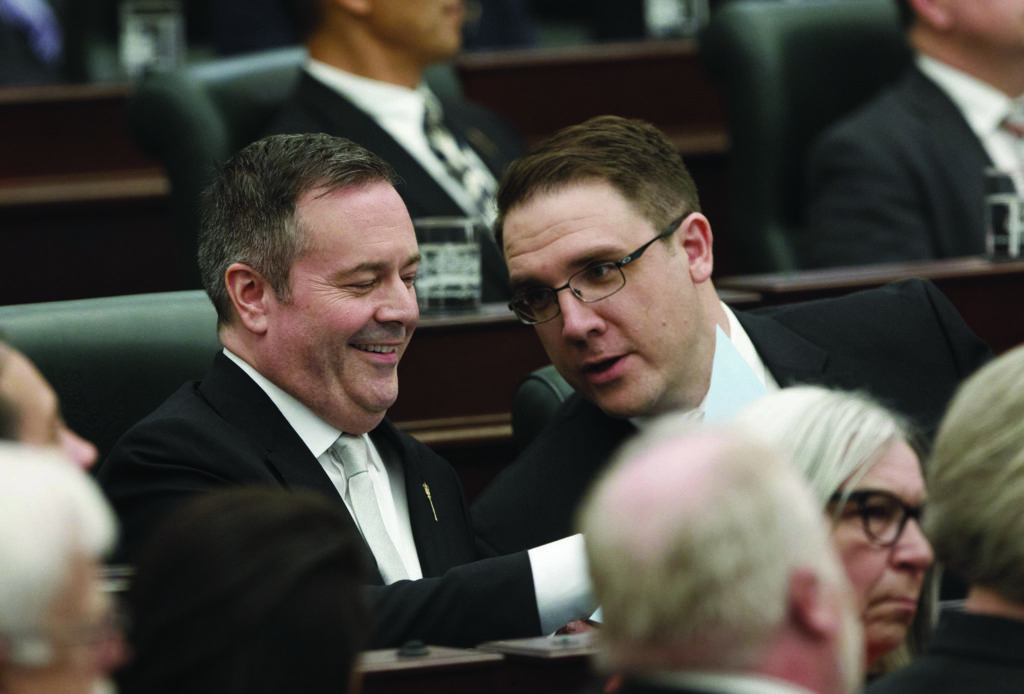 Alberta Premier Jason Kenney and Jason Nixon, Minister of Environment and Parks chat before the speech from the throne is delivered in Edmonton on Tuesday May 21, 2019. THE CANADIAN PRESS/Jason Franson

The letter about why the Teck Frontier oil sands mine is dead has turned out to be the Rorschach test of modern Canadian energy politics.

In a key paragraph, the letter cites a number of factors that killed the massive $20-billion Alberta project.

They include “global capital markets are changing rapidly” and the need for “a framework… that reconciles resource development and climate change,” which the letter says does not exist “here.” (Canada? Alberta? Earth?)

“Questions about the societal implications of energy development, climate change, and Indigenous rights are critically important ones for Canada, its provinces, and Indigenous governments to work through,” the paragraph concludes.

Well, that’s true enough, but it feels a bit like finishing your rushed Grade 6 social studies essay with “in conclusion, Bolivia is a land of many contrasts.”

We know that. What we should do about it is the question.

So far, reaction to the death of Teck Frontier has fallen out along predictably partisan lines.

Environmentalists have pointed to the fact that oil prices have been way below where Teck said they would need to be to be profitable, and that investment funds were getting leery about long-term stakes in fossil fuel extraction, as no one can accurately forecast how long we’ll keep pumping oil at the level we have been.

This is entirely true.

Also true is that the lengthy wrangle over the Trans Mountain Pipeline and the recent protests by Indigenous Canadians and environmentalists in support of the Wet’suwet’en blockade, plus the fact that Prime Minister Justin Trudeau’s cabinet was widely reported to be split on Frontier would make any company reluctant to invest. Suits don’t like the idea of grubby proles turning up outside their offices waving placards, or worse, shutting down work sites.

To put my cards on the table, I was opposed to Teck Frontier. I understand the other side’s arguments, but I think building more and more oil and gas infrastructure is just going to push back the day when we can finally get to grips with the climate crisis.

But the long wrangle over Frontier and every other energy pipeline and project in Canada is sapping energy that could be put to good use elsewhere.

The only thing anyone can agree on is that a big problem is certainty, and the lack of it that exists in Canada.

The only way to actually alleviate this would be for a national plan to eliminate CO2 emissions in manageable steps.

Most importantly, those steps would have to be shorter than the current election cycle.

If Frontier or Coastal GasLink or other projects help or hinder those goals, we have a better handle on how to actually get out of this mess.

For Canadian Muslims, second pandemic Ramadan is a time of hope and sadness

B.C. NDP now wants to keep even ‘non-farmers’ on the land

COVID outbreak has led to eight games being cancelled

UPDATE: B.C.’s COVID-19 vaccine booking back up after maintenance

Caller told to call back later in the day