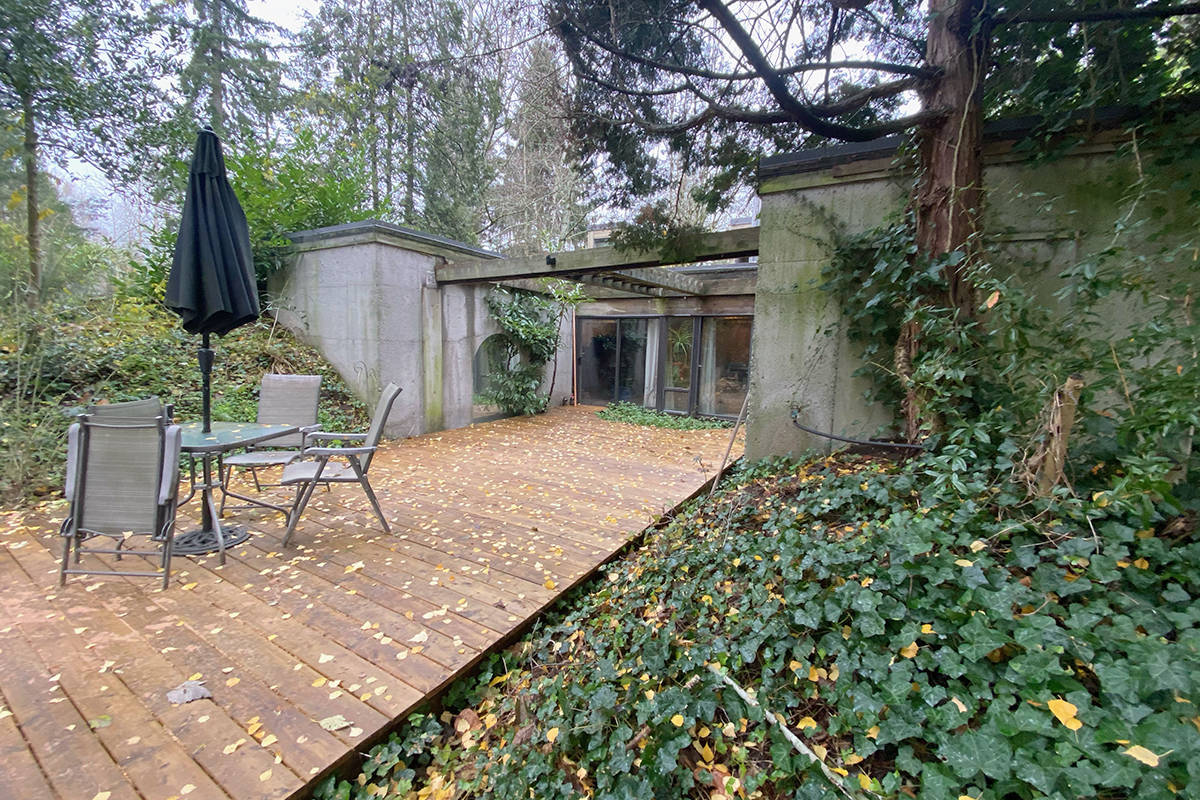 The South Surrey ‘Underground House’ includes skylights and just one side ‘window’ – this glass door that leads out to a patio. (Contributed photo) 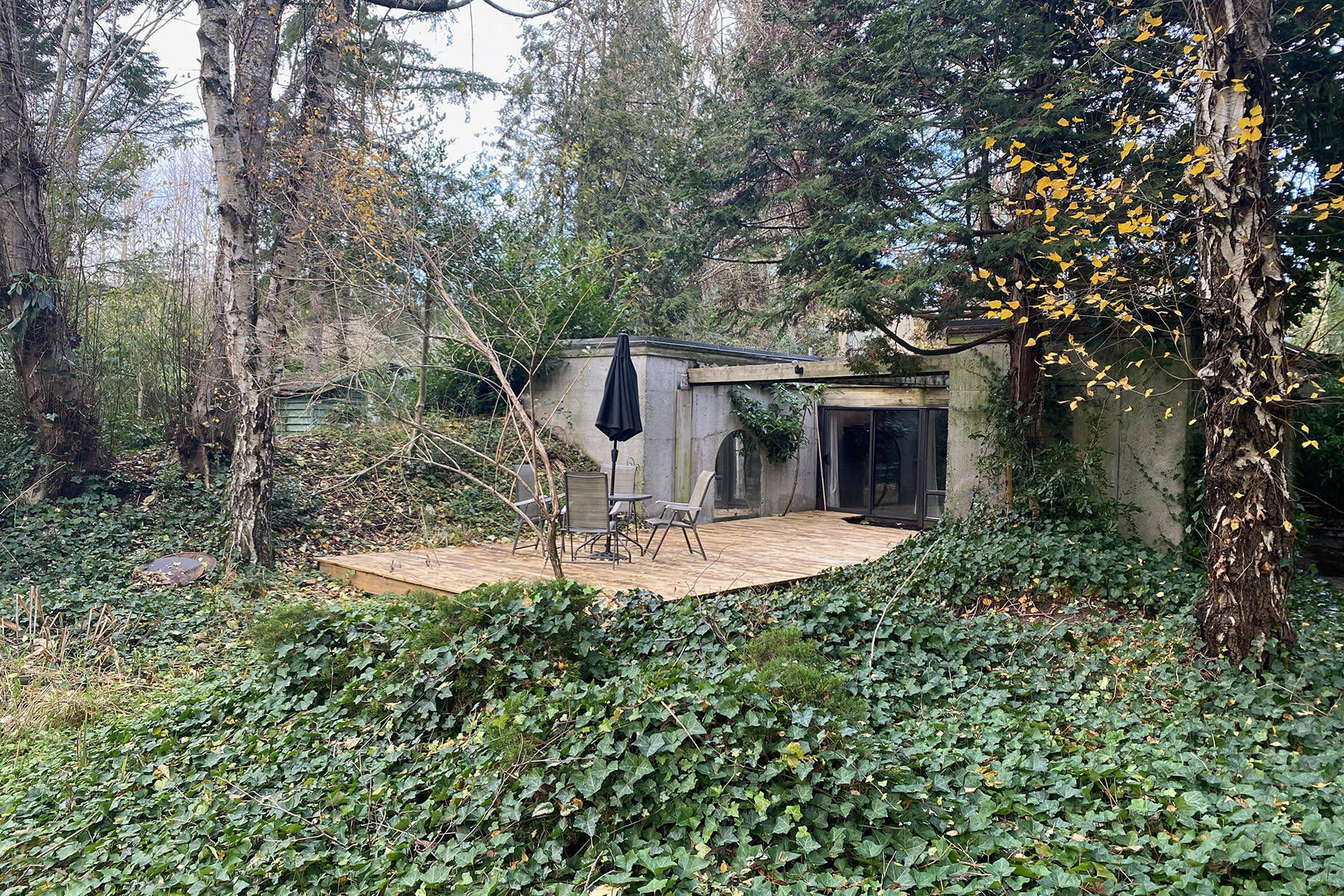 The South Surrey ‘Underground House’ is surrounded by nature – which was the intent of designer John Kay. (Contributed photo) 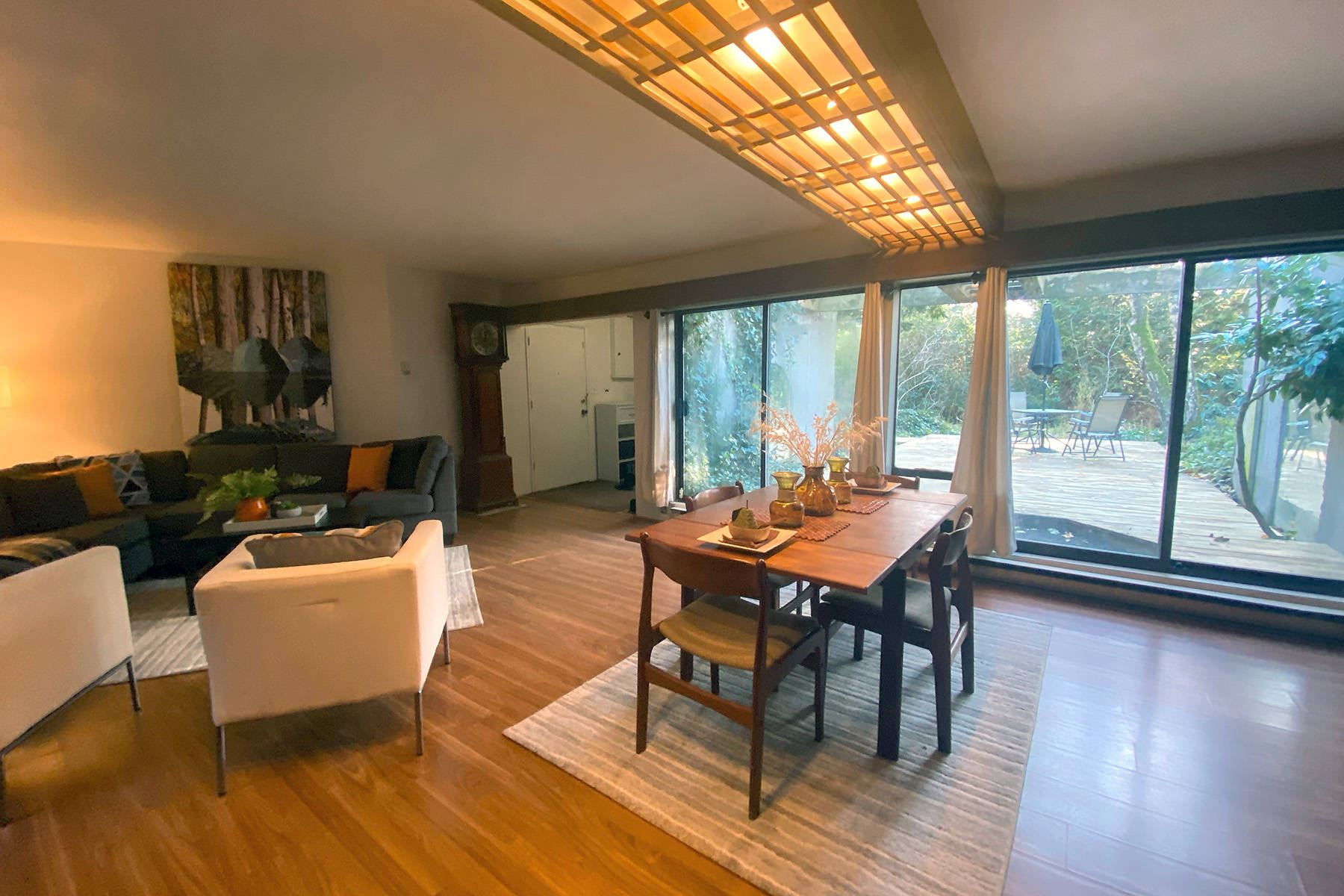 The interior of the ‘Underground House’, looking out through the sliding doors onto the patio. (Contributed photo) 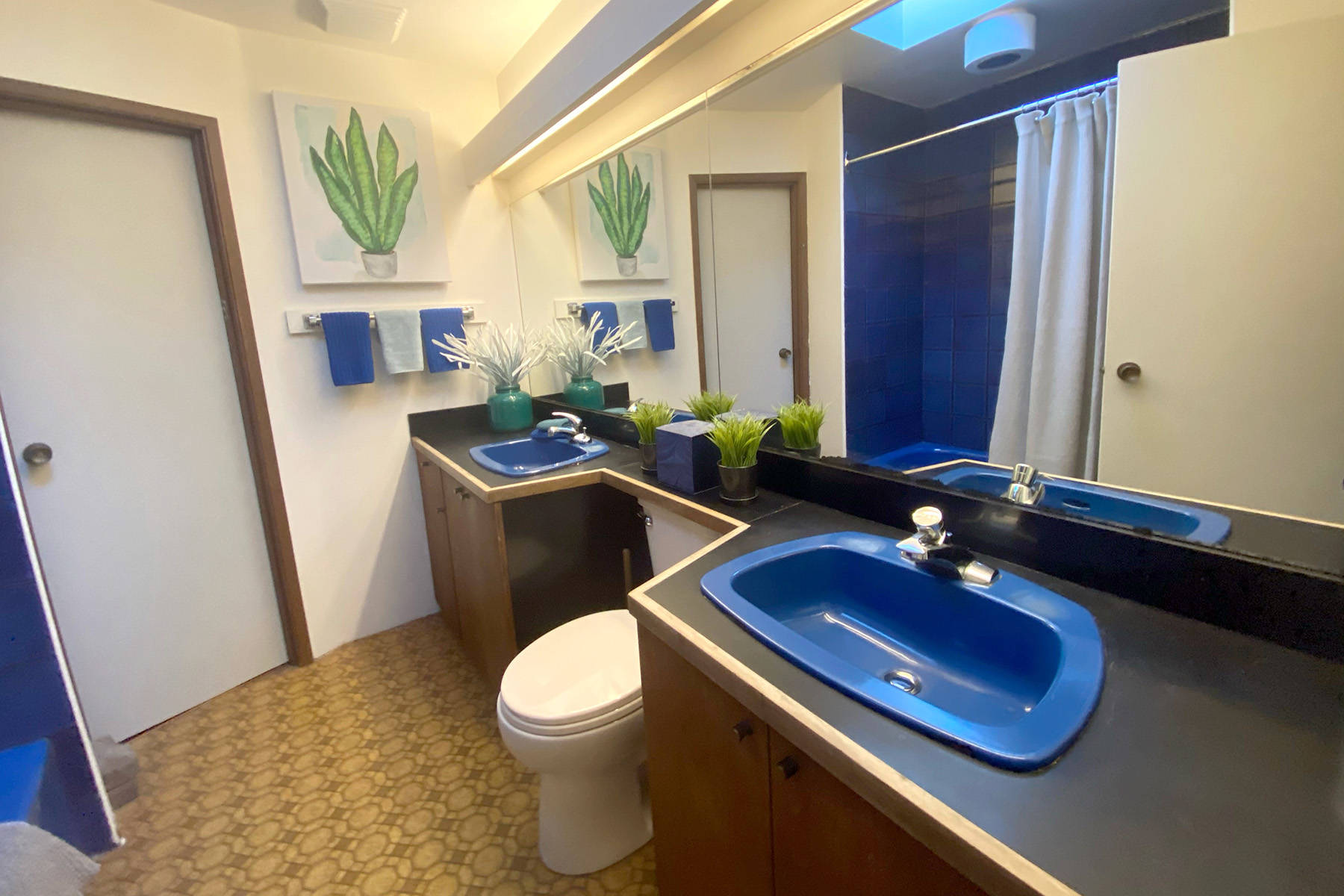 The ‘Underground House’ has plenty of unique features, like these bright blue sinks in the bathroom. (Contributed photo) 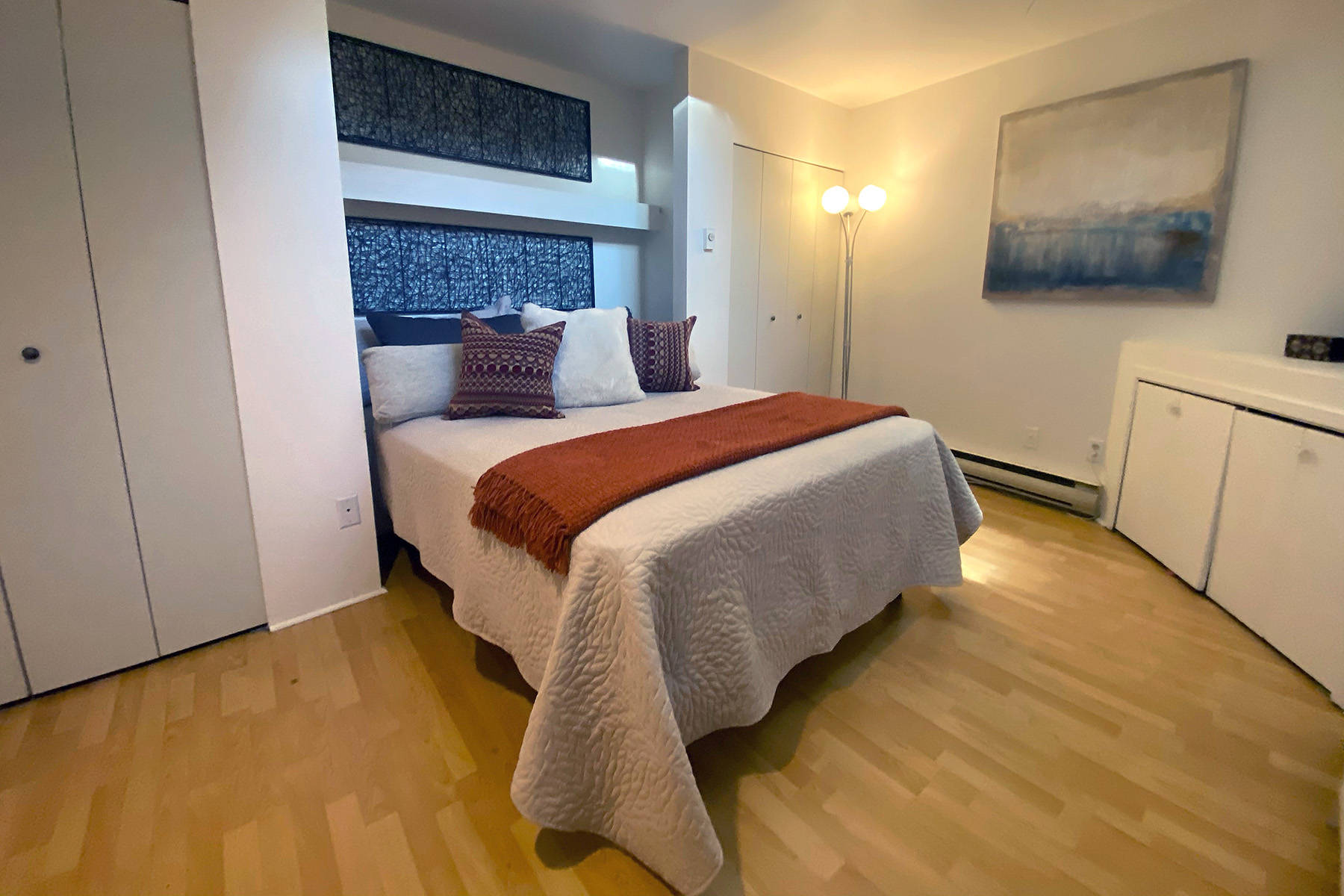 A bedroom in the house, with one curved wall as a result of the home’s unique shape. (Contributed photo) 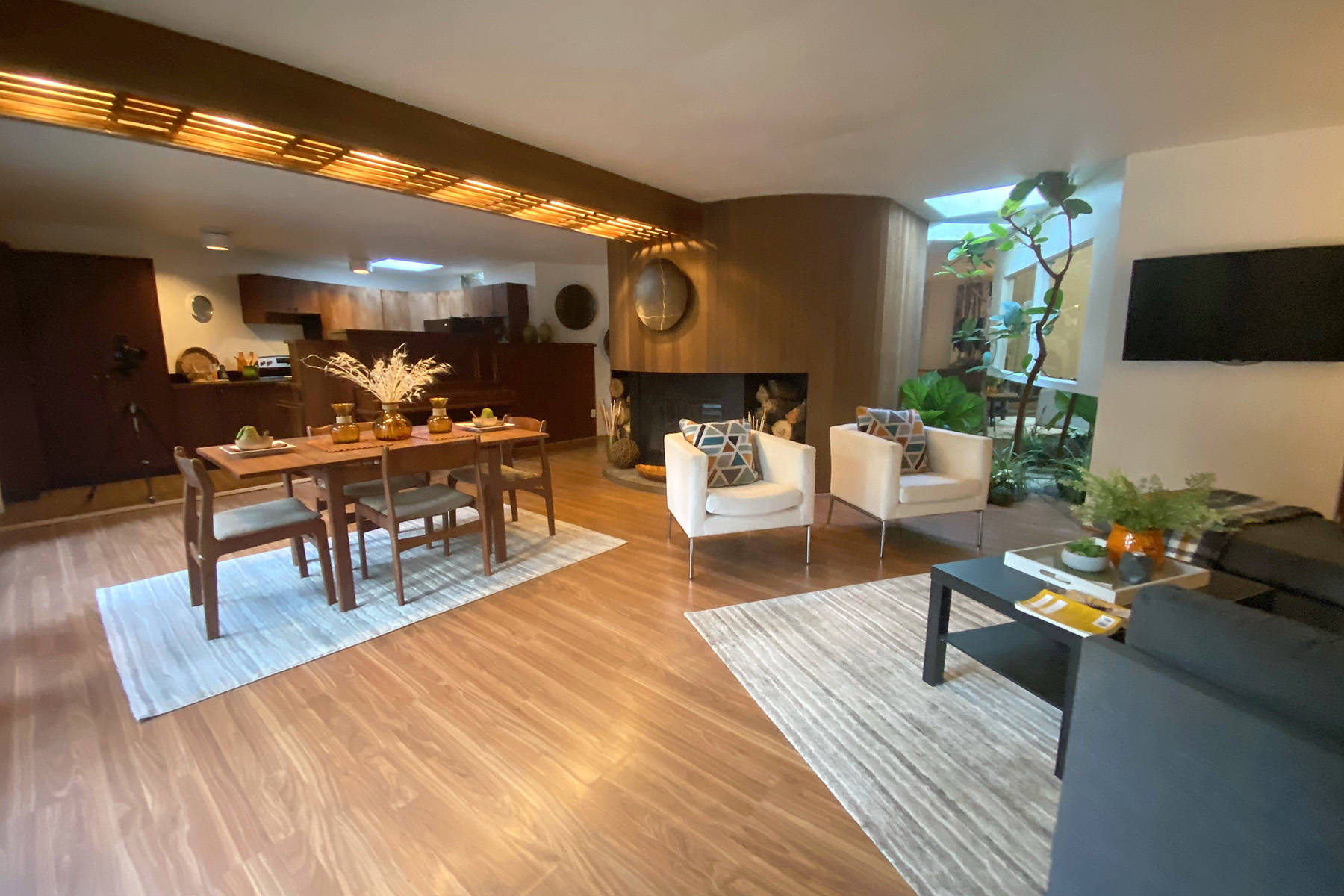 The interior of the home is mostly circular, with a fireplace at the center. (Contributed image)

One of the most unique homes on the Semiahmoo Peninsula is about to go on the market.

Known to neighbours and others in the area as the “underground house” according to real-estate agent Amanda Milford, the house was designed and built by late architect John Kay in 1980, and has been in his family ever since. Kay and his wife, Gunilla, raised their family at the 2027 174 St. home, and more recently, it’s been occupied by their daughter.

And while it sits on a lot size – just over one acre – similar to others in the neighbourhood, that’s where the similarities end. The house – which Milford, who works for Homelife Benchmark Realty in White Rock, calls “very unassuming” – cannot really be seen from the road, as trees and bush cover much of the property.

Even if you were to peek through the foliage, or down the long driveway, you might only catch a glimpse of the grey, bunker-like structure, which is embedded into a slope. That was the whole point of Kay’s design, Gunilla says.

“He wanted to be set in nature but didn’t want to stand out. That’s why our house is the way it is, and the reason we don’t have a pink house or a blue house or anything like that,” she said.

“John wanted it to blend with nature… he was into green architecture, organic architecture – I think he was probably one of the first to start (designing houses) like that.”

True to his style – which can be seen in other Kay-designed homes everywhere from West Vancouver’s British Properties and Langley’s Cedarbrook Village to homes in California and Australia – the South Surrey home contains many Kay trademark elements, especially his love of circles and curves. If seen from above, the home is essentially one big circle and two squares.

Most notably, the south-facing 1,530 square-foot home contains only one side window – a sliding glass door that leads to a patio – with the rest of the natural light provided by a series of skylights.

The centre piece of the home, Milford points out, is a fireplace in the middle of the main circular room, with an indoor garden next to it.

The house will hit the market Friday (Dec. 4), and will be listed for $2.325 million. Milford said Kay’s unique designs are sought-after by architectural aficionados from across the world.

“There are collectors out there, almost,” she said.

John Kay passed away in 2009, and Gunilla said she recently decided it was time to let someone else enjoy the property.

“It was a bit of a difficult (decision to) sell… but I think it’s time to move on,” said Gunilla, who lives in a rented home in Ocean Park. “I’m sort of at a crossroads now, and I wanted to change things – I want to see if I can find another house somewhere else that I can enjoy.”

Among her favourite memories of the home, she noted, were the winters that got cold enough for their pond on the property to freeze – which brought all the neighbours by for a skate.

“The kids loved it, because it was just so different from their own homes,” she said.

John won many awards for his designs, Gunilla pointed out, and he was also an avid furniture designer and poet, among other creative pursuits. And while the family’s underground house is certainly one-of-a-kind, one of his more unique home designs was for a building that never got built, she said.

Designed to be a summer home in the Caribbean nation of Trinidad, her husband once designed a ‘mushroom house’ that included just one door, then a long multi-storey “stem” with the living quarters at the top. It was designed with security in mind, Gunilla said.

Much of his inspiration for both their own home, as well as others he designed, came from his interest in castles, she added.

“A lot of the houses he designed had curves… we used to travel in Europe and explore all these castles,” she said.

“And a lot of his ideas – circles, other shapes – came from seeing them. He was a very proud man, and liked to experiment with a lot of things – he was just very creative.”

UPDATED: One person has died following South Surrey crash between car and semi