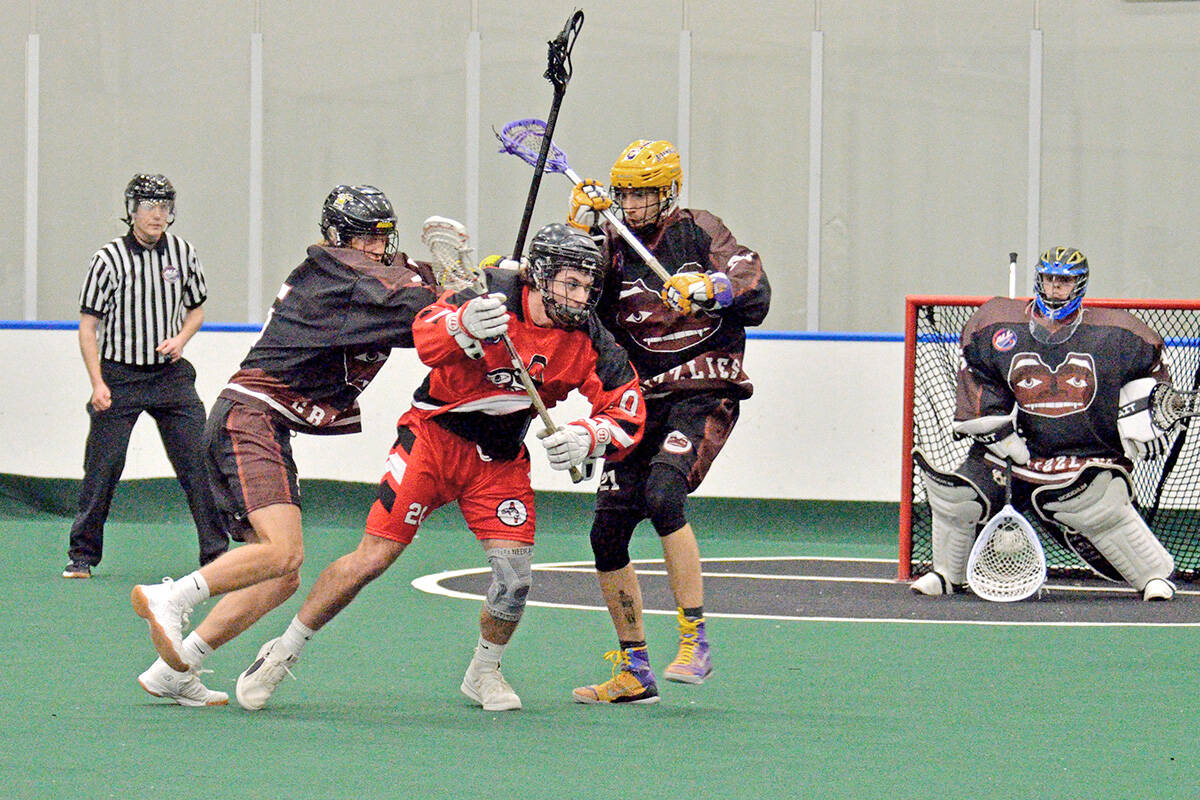 Black Fish player Jordan Roberts tangled with Grizzlies defenders Brayden Laity and Cody Garrison on the way to a 12-8 victory over the previously unbeaten Grizzlies on Saturday, Jan. 8 at the LEC. Gary Ahuja, Langley Events Centre/Special to Langley Advance Times) 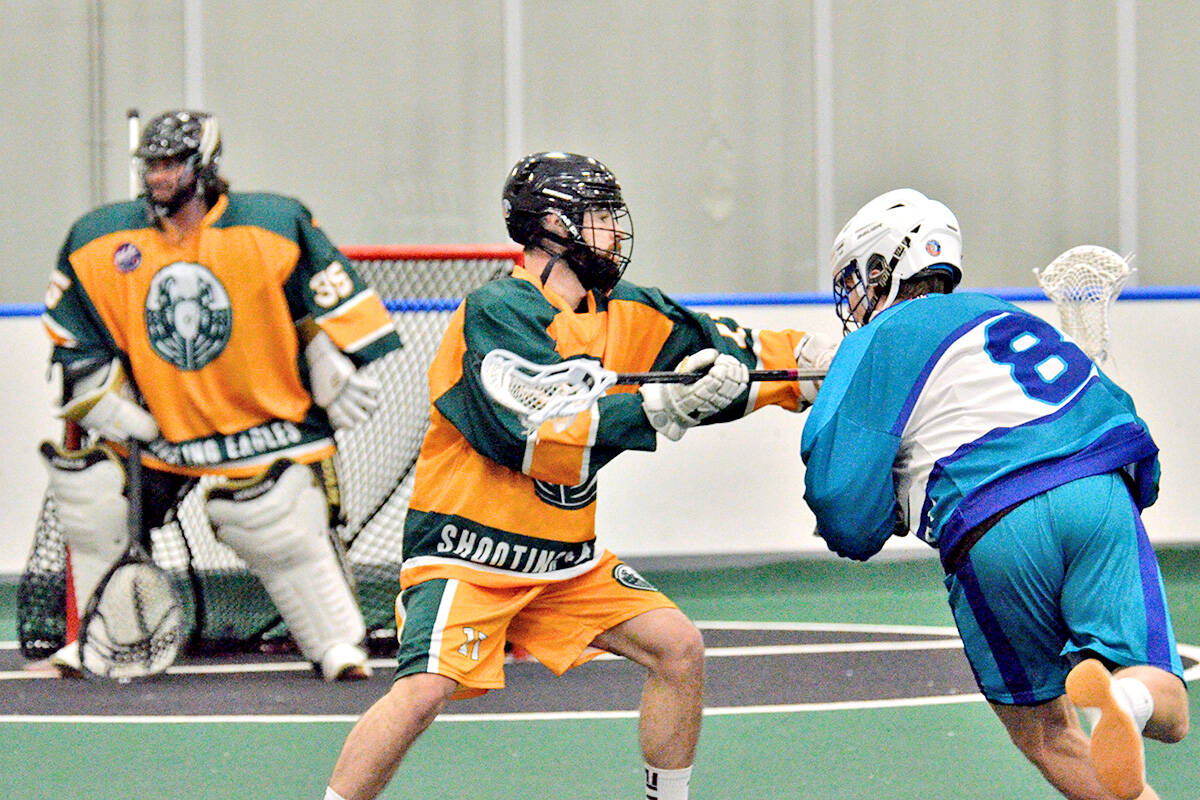 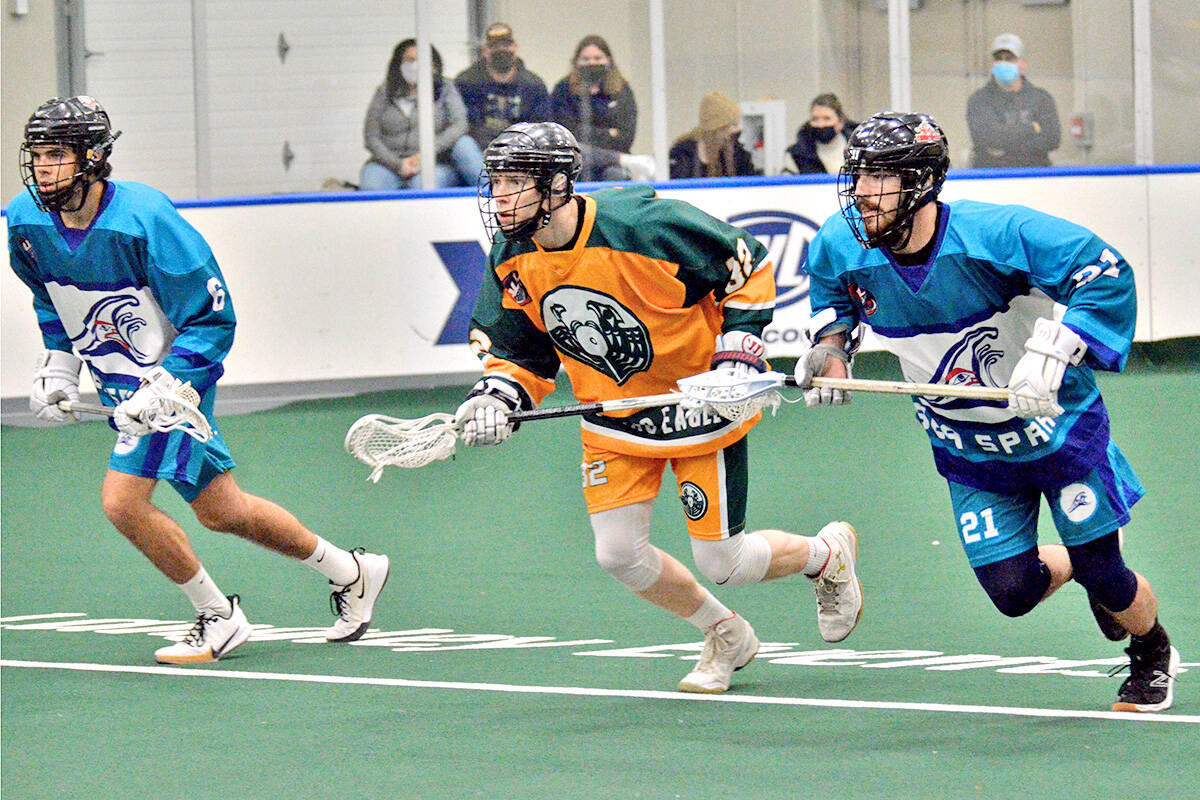 Keegan Bell spent Friday night on the active roster for the National Lacrosse League’s Vancouver Warriors but was a healthy scratch, watching from the sidelines as his Warriors teammates fell to the Colorado Mammoth.

Was Bell’s seven-point outburst (and first star honours) motivated by not getting the call to play for the Warriors the night before?

“It is just me playing my game. I am not really thinking about proving anything to anybody,” he offered. “I just come out here and play for my team, whatever jersey I have on. I got the opportunity to play today and luckily things went my way.”

Saturday’s game did not begin very well for the Sea Spray as they were trailing 3-1 less than four minutes and were down 4-3 at the first-quarter mark. But the team scored seven goals in the second to lead 10-6 at the half and after the Shooting Eagles cut the deficit to 11-8 with a quarter to play, the Sea Spray responded with another seven-goal outburst in the fourth to put the game out of reach.

“The guys were just shooting well and playing hard. We were preaching on the bench to stay disciplined and focus on our game and that paid off in the end. The guys bought into it,” said Sea Spray coach Andy Ogilvie.

“We have a good group of guys and they work hard and they are talented, but we have to get in better shape,” said Shooting Eagles coach Adam Smith.

“We got outworked today and transition is like a measurement of that. Transition and loose balls, they are the two measurements of being outworked and we lost both of those. That is the bottom line: we just got outworked.”

Sea Spray next face the Black Fish on Sunday, Jan. 16 at 1 p.m. in week five action while the Shooting Eagles face the Grizzlies later that same day at 4 p.m. 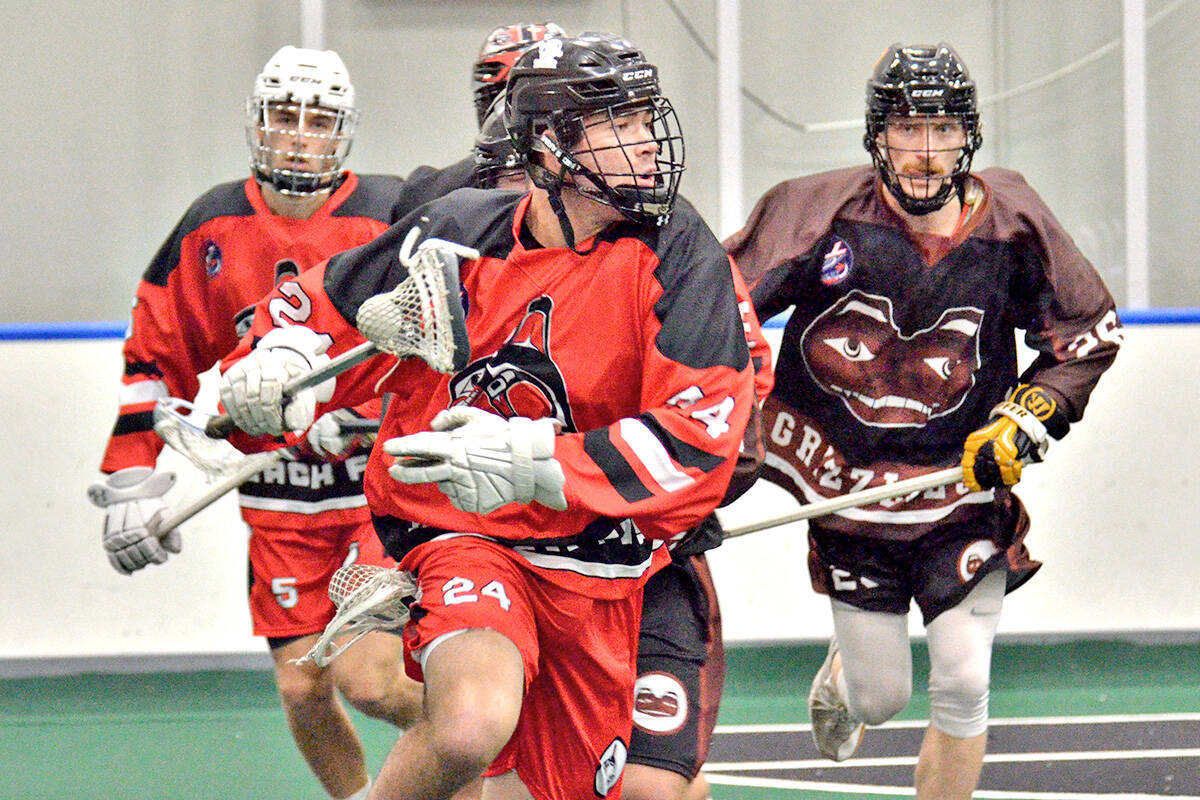 In a battle of teams at the opposite ends of the standings, it was the winless Black Fish Lacrosse Club coming through with a huge 12-8 victory over the previously unbeaten Grizzlies Lacrosse Club on Saturday, Jan, 8. (Gary Ahuja, Langley Events Centre/Special to Langley Advance Times)

In a battle of teams at the opposite ends of the standings, it was the winless Black Fish Lacrosse Club coming through with a huge 12-8 victory over the previously unbeaten Grizzlies Lacrosse Club.

In their first three games, the Black Fish have scored a combined 17 goals, so the dozen goals they scored Saturday was double their season average.

“We have had some good periods of lacrosse (this season) but unfortunately have not been consistent enough,” said Black Fish coach Rod Jensen. “Today, we were consistent and our goalie played really well and made some big saves while our offence played with a little more passion.”

A big story of the game was goaltender Justin Geddie who earned first star honours thanks to a 41-save effort.

He credited his defence for making his job easier.

“They were phenomenal. I can’t even put to words how good they were tonight. They gave me the shots I was looking for. They just did so well tonight,” he said.

The Grizzlies were led by two goals and one assist apiece from Brian Smith and Pearson Willis while Mitch McDole (one goal, two assists) and Jacob Patterson (three assists) also had three-point games. Sekawnee Baker and Kieran McKay each had a goal and an assist while Andrew Gresham had a goal and James Baker had two assists.

“ I think we honestly thought it was a foregone conclusion and it wasn’t. They have a bunch of good players and came out and played well aggressive,” said Grizzlies coach Rob Williams.

Curling season ends with a loss for Langley’s Team Tardi

Their planned trip may be on hold because of COVID, but a Langley soccer team isn’t giving up