When Andrew Pocrnic was 16, in Grade 10, he realized he had a talent for football.

“Something just clicked in my head,” Pocrnic told the Langley Advance Times.

Quite literally, as it turned out.

Six years on, the now 22-year-old Langley Rams running back has been signed by the B.C. Lions as a territorial protected junior player.

That put the cap on a season to remember, one that saw the Saskatoon native shatter several long-standing records in his last year with the team.

Pocrnic was a big reason why the BCFL Rams went undefeated during the 10-game regular season, with some blowout wins that saw the 5 ft.10 in., 210-pound Pocrnic blast past several long-standing records.

Along with setting a Canadian Junior Football single-season record for touchdowns (27) in 2019, Pocrnic was named the BC Conference’s most outstanding player.

His version of events is that he wouldn’t have got there without teammates who backed his plays and cleared a path through defensive lines, and a coaching staff who supported his bid to enter the record books.

His efforts helped the team to another Cullen Cup and a berth in the Canadian Bowl final against Saskatoon, and a narrow defeat before a hometown crowd at McLeod Athletic Park.

With so many accomplishments on his resume, turning pro would seem to be a logical, even inevitable next step. But Pocrnic still sounded surprised.

“It’s a bit of a surreal feeling,” he commented.

He doesn’t sound like someone who plans to rest on his laurels.

“I have to make my mark there.”

He intends to approach his new challenge the same “day-by-day” way he went after the records, by not allowing himself to be overwhelmed by the size of the task and focusing on his immediate goals.

Long-range, he aims to have a career with longevity, to be a “10-year” professional who makes enough from the sport to support his family.

“I love the sport,” he said. “Ever since I started to play football, it’s been a love and passion. I love what it can do for my family. Hopefully, I can make enough that I can help my family.”

Especially, his mother, Jadranka, who has been to almost every game he’s appeared in, even though she lives in Saskatoon.

She is, he agrees, his biggest fan–as he is hers.

“That kind of goes both ways,” he said.

“He got the opportunity to play for a high-calibre football team and that motivated him,” Zaron commented.

Pocrnic “deserves full credit” for making the most of the opportunity, Zaron added

The coach also expects former Ram Jevon Cottoy, a wide receiver who now plays for the Lions, will help Pocrnic make the transition.

Now the Rams coach has the task of replacing Pocrnic along with other departing players.

“Right now, we have about six spots to fill and I’ve filled about half of them.” 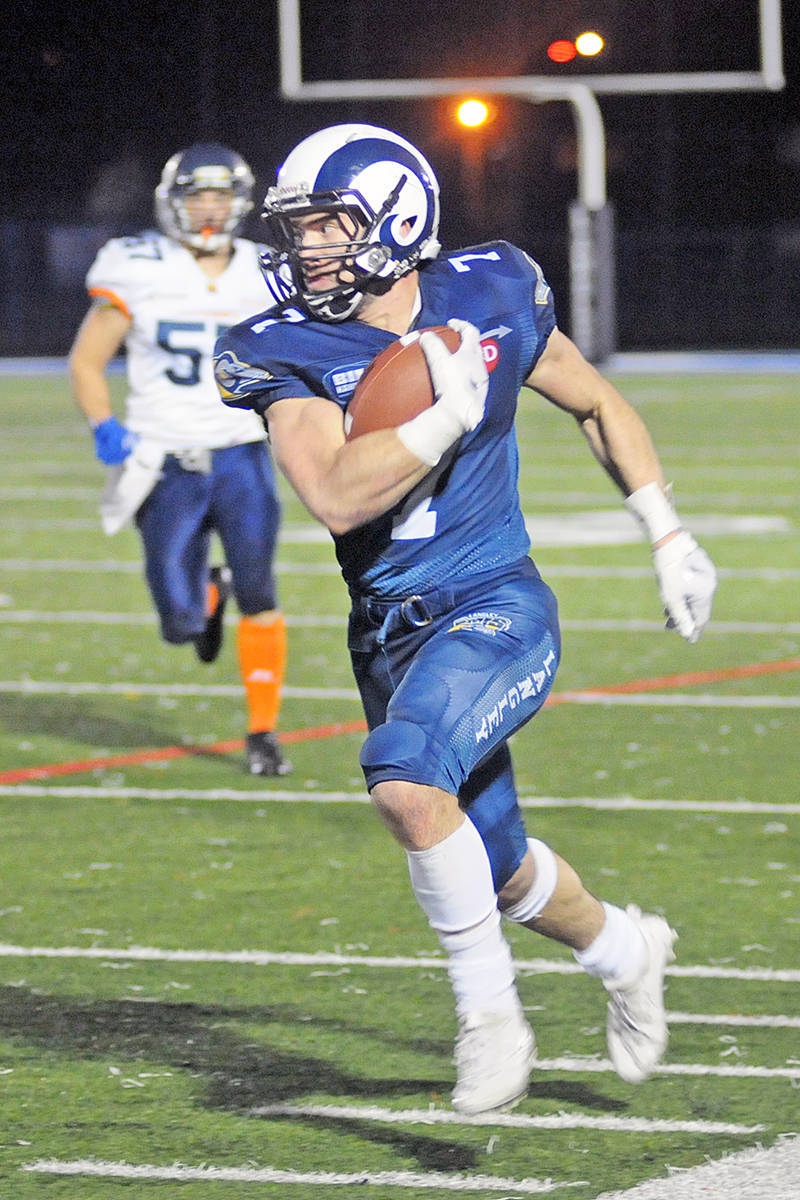 Andrew Pocrnic carries the ball during his final regular season game with the Rams in October, one that saw the team go undefeated and the star running back shatter several records. (Langley Advance Times file)

Giants first game of the new year gets underway at 2 p.m. in Langley