Aldergrove’s Kassidy Keith brought a newer partner into the $5,000 MarBill Hill U25 1.40m at Thunderbird Show Park on Saturday, Aug. 27, and picked up right where she left off earlier in the season, with a victory.

Aboard Cheryl Keith’s Fenelon WF, Keith was practical, smooth, and efficient around the Peter Holmes speed track. Her goal was a smooth ride, and the horse’s natural speed provided enough to take the win in 61.70 seconds.

Keith has been bringing the now nine-year-old Irish Sport Horse stallion up through the height levels since age 5, allowing him to blossom at his own pace. 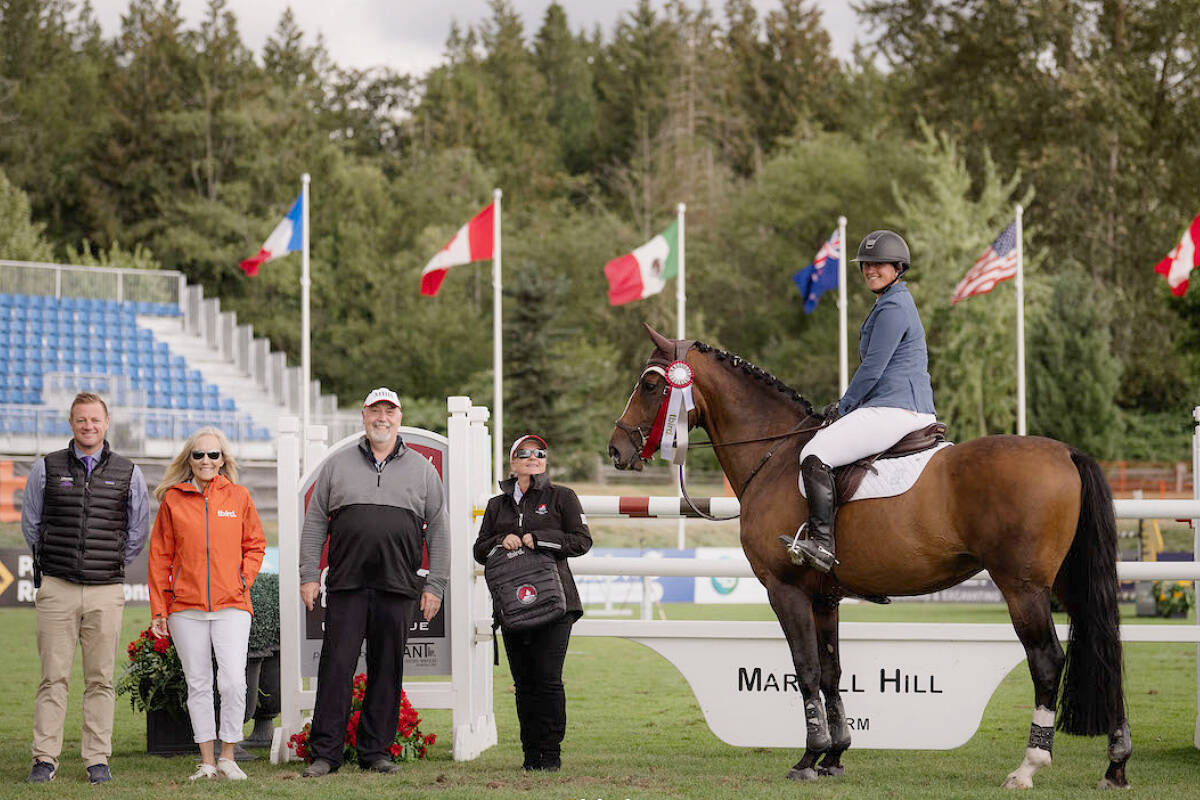 “He’s very short and supple, kind of like a sports car,” Keith, 24, described. “He’s moving up the ranks. I jumped my first 1.40m with him in April and he was super. We’ve been going up and down in heights to keep him comfortable. He’s a super cool horse and I think he’ll jump the 1.50m. He’s Irish so I feel like he’s got no real limit until you test him.

“He was with me 100 per cent of the time,” Keith continued about her round with Fenelon WF Saturday. “He was looking a little because one of the gates was swaying back and forth because it was windy, but he tried his heart out.”

A few months ago, Keith was in the winner’s circle in the MarBill Hill U25 on her seasoned mare Havana. This time, with a newer mount, she’s gaining valuable miles on both her own and the young horse’s show records as she campaigns Havana in the FEI division.

“I have so much experience with Havana jumping 1.40m,” she said of her partnership. “I jump Havana FEI and use her to jump bigger, and I use this horse to get in the ring throughout the week to practice. The U25 classes give me so much experience because I can get in the ring three times a week and get in before I show Havana. It really sets you up well to then jump the bigger classes.”

With two horses at the higher levels, Keith is one to watch in the U25 and the FEI divisions. “I find it really helpful that I have two to do that now,” she said of her string. “It’s helping me practice and I can get competitive on [Fenelon WF] now because he is more experienced. These classes are so good for him too in that sense.”

Behind Keith and finishing second was Stella Chernoff with the Stump Lake Ranch and Cattle Co Ltd entry Connador in 64.65 seconds. In third and the only other clear round effort was Katie Kehring with the Kehring Family’s Edesa’s Filippo T Z, crossing the finish beams in 65.69 seconds.