While one game was a high-scoring affair featuring a combined 31 goals with the Black Fish winning 16-15, the day’s second game saw the Grizzlies score an 11-7 victory over the Sea Spray on Sunday afternoon, Nov. 13, at Langley Events Centre as the Arena Lacrosse League West Division kicked off its second season.

For much of Sunday’s game between the Black Fish and Shooting Eagles, neither team’s offence had much difficulty finding the back of the net. But with his team nursing a one-goal lead in the dying seconds, Black Fish goaltender Matt Hills came up with a game-clinching save, preserving his team’s 16-15 win over the Shooting Eagles.

The Shooting Eagles’ last-ditch effort to extend the game saw the team work the ball to Garrett Winter, who cut across the crease but his diving shot was foiled by Hills’ glove.

“They beat me down low a couple of times near the end of the game, so the only going through my mind is I have to save this. We got the job done and on to the next one,” Hills said.

Hills had entered the game for the third quarter.

“It is a little tricky; you have to keep your body warm and just be ready for anything. You just have to stay humble and be ready to rumble,” Hills said about beginning the game on the bench for the first half.

Black Fish coach Rod Jensen said the plan all along was to give both goalies 30 minutes, adding that Hills’ timely save also bailed out the head coach since he had designed the defensive play he wanted his team to run in the situation.

After the Shooting Eagles scored the first two goals, the Black Fish rattled off a 6-0 run and never trailed again, although their opponent managed to get back within a goal on six separate occasions.

“Came down to the last shot. I thought both teams competed hard. We kept getting a two, three goal lead and they kept battling back, so good on them,” Jensen said.

Shooting Eagles coach Adam Smith saw some good in his team’s debut but knows allowing 16 is not a recipe for a success.

“When you score that many, you expect to win. You expect your defence to stop them, but the reality is, it is our first game out there, and our defence is coming from different provinces and different countries, and all different levels of lacrosse, so you need a little bit to figure out what the systems are and to gel together,” he said. 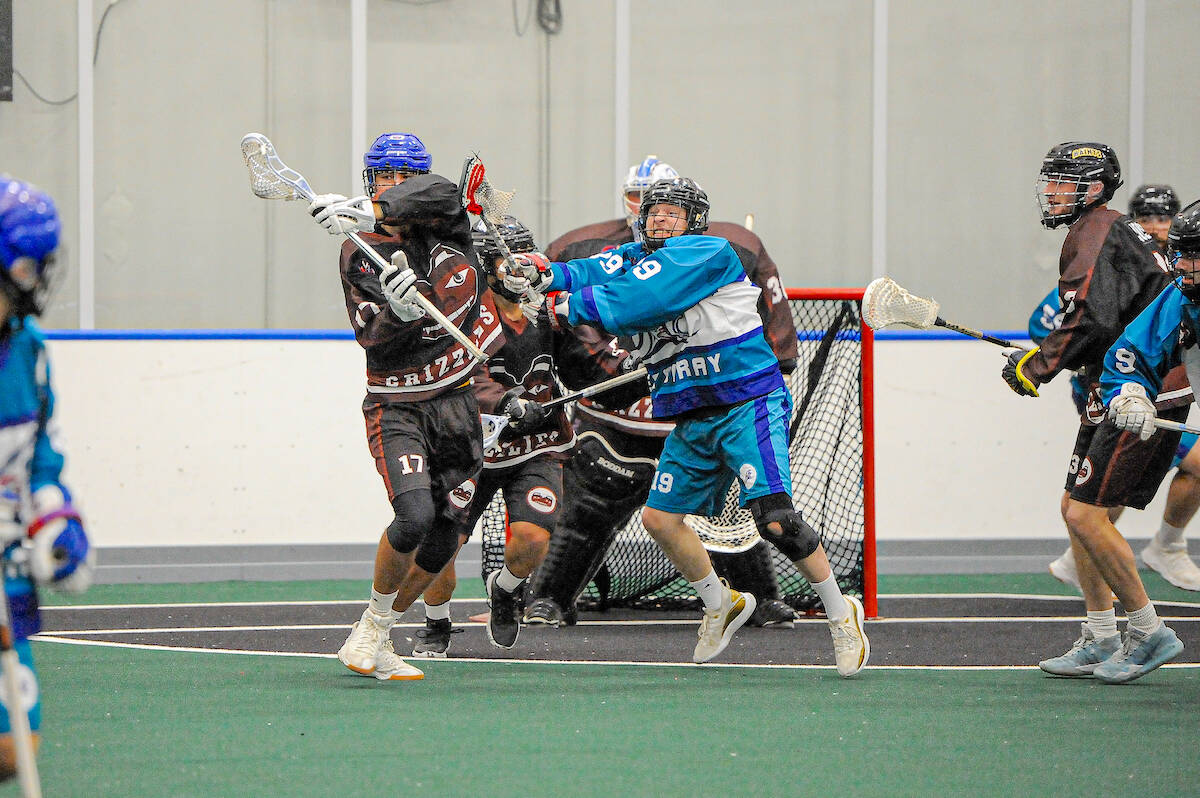 Kyle Mooney stopped 37 of 44 shots while Sekawnee Baker had a hat trick and seven points in leading the Grizzlies to a season-opening 11-7 win over the Sea Spray on Sunday at Langley Events Centre.

The teams were tied at two after 15 minutes with the Grizzlies taking a slim 4-3 lead to the locker room. They were up by two goals after three quarters, 6-4, before both teams’ offences found some traction in the fourth with a combined eight goals.

“I thought the team worked hard and they worked as a unit all game along. The goal was to focus on our game and be disciplined, and then get better as the game went on,” said Grizzlies coach Zack Porter. “Our offence came along late, finishing plays as they got open, and our defence was strong all night and goaltending — Mooney stood on his head.”

Mooney, the game’s first star, deflected credit to his teammates.

“It was a really good team effort. Everyone came out ready to go. The offence was looking good, swinging the ball and getting a lot of chances and the defence just made it really easy on me to see the ball, get the deep shots I want,” he said.

Gordie Phillips led the Sea Spray with a hat trick and was the second star with Baker’s seven-point game earning him the third star.

For the Grizzlies, Pearson Willis (2+2) had a four-point game while Nash Moog (0+3) and Mitch McDole (1+2) both had three-point outings. Alex Dozzi added a pair of goals with Steve McKinley, Jake Stott and Joseph Callard each registering a goal and an assist.

Jared Moloci scored twice for the Sea Spray with James Rahe (1+1) and Nathan McKeigan (1+0) each getting a goal.

Sea Spray head coach Russ Heard said the goal was to keep the game a low-scoring affair as his squad was missing several key offensive pieces from last year and were also trying to work in some new players up front with limited practice time.

“Some of the penalties let the game get away from us, but overall, the effort was good,” he said. “All in all, a pretty good effort for what we had tonight.”

Gambling group estimates US will bet $1.8B on World Cup