A cloak of darkness smothered the outside world, as Langley couple Jason Vandenborn and Kendall Ballantine sped their truck through the desert in the dead of a foggy night along the southwest coast of Mexico.

The couple was competing in the taxing Baja 1000, the largest off-road race in the world with 405 teams and more than 3,000 drivers competing in various classes.

This year marked the 50th anniversary of the a race that covered 1,134 miles along the Baja Penisula from Ensenada (40 miles south of Tijuana) to La Paz.

Baja 1000 from Ensenada to La Paz, racers travelled across some of the most intense terrain this… https://t.co/SyprY282At #Offroad #Racing

Vandenborn drove and Ballantine, navigated; they completed the ‘Ironman’ and not once switched seats from driver to navigator.

“It’s uncommon to see races this long run the ‘Ironman’, as most teams have up to five drivers and five co-drivers,” Ballantine said.

Of the 413 entries overall, the couple figures they were among four that completed the ‘Ironman.’ They raced for 45 hours, 49 minutes with only a pair of 10-minute rest/sleep breaks mixed in, where they leaned their heads on the dash and steering wheel of the truck, respectively.

They finished first in their class, their speeds ranging from 18 mph to 70 mph, depending on the terrain.

“We started Thursday (Nov. 16) at about two o’clock in the afternoon, and then we raced Thursday night, all of Friday, Friday night, and Saturday morning (Nov. 18),” Vandenborn said. “We ended up crossing the finish line about noon.”

Ballantine, who was was one of only 63 females taking part among the 3,000-plus racers, used GPS and a satellite tracking systems that put the truck in the right direction.

Competing in this race was at the top of Vandenborn’s bucket list and, Ballantine said, “was a total dream-come-true for him to not only get to compete but to win our class.”

The couple used a Protruck, a tube chassis machine equipped with a nearly 700 hp engine.

Competing in the Baja 1000 was a dream of Vandenborn’s since he was in Grade 4.

“It took me all the way until I was 43 years old to be able to afford to do this,” Vandenborn said.

During the race, the Protruck burned through roughly 300 gallons of fuel. Two other groups of people chased the truck down the Baja Peninsula to provide fuel when necessary.

“They were on the freeway, and we also get sponsored by a company called Mag 7, and they’re a pit crew service, so they do fuel stops every 60 miles along the race course,” Vandenborn said.

Another challenge came when nature called.

“I found that I was so dehydrated throughout the whole thing that I only had to stop at one pit and go to the washroom,” Ballantine shared.

“The truck usually runs about 30 degrees (Farenheit) than it is outside,” Vandenborn added. “So if you’re 80 degrees outside, we’re at 110 or 100 degrees inside the truck, so we were constantly sweating. By the end of the race, after those 45 hours we were both so dehydrated, pee breaks were at a minimal.”

As for driving in a shroud of darkness, Vandenborn said it was a “whole new world.”

“The thing about a Protruck is there is so much lighting on it,” he noted. “You have seven massive lights on the roof and four massive lights along the front grill, but it was different. The part of the Baja Peninsula that we went over for the Thursday night and Friday night, it was super foggy and there was a little bit of rain so you could only see 30 or 40 feet ahead of you. Also, all the dust on the vehicle turned into mud.”

And while finishing the race was immensely satisfying, Vandenborn said driving off-road for nearly three days non-stop was the “hardest thing I have ever done in my life.”

There were 130 miles of freeway making for a smooth drive on that portion, but much of the race was off-road, on rock, and on ‘whoops’ which were four-foot undulating bumps about six feet apart.

“I think it took us about seven hours just to go over that area,” Vandenborn said.

The couple had drag raced and street rodded before but Vandenborn said there is something about desert racing that appeals to them.

“When you’re with your wife, there’s no point in starting a conflict because you are stuck with each other until the end of the race,” Vandenborn said. “We’d get stuck quite a bit; we got stuck about four times where we’d have to dig it (the truck) out and you just know that you have to get that thing out. There’s nobody that can bring another vehicle in to pull you out. If your race vehicle can’t make it through it, there’s no way any of your chase vehicles will make it through it.” 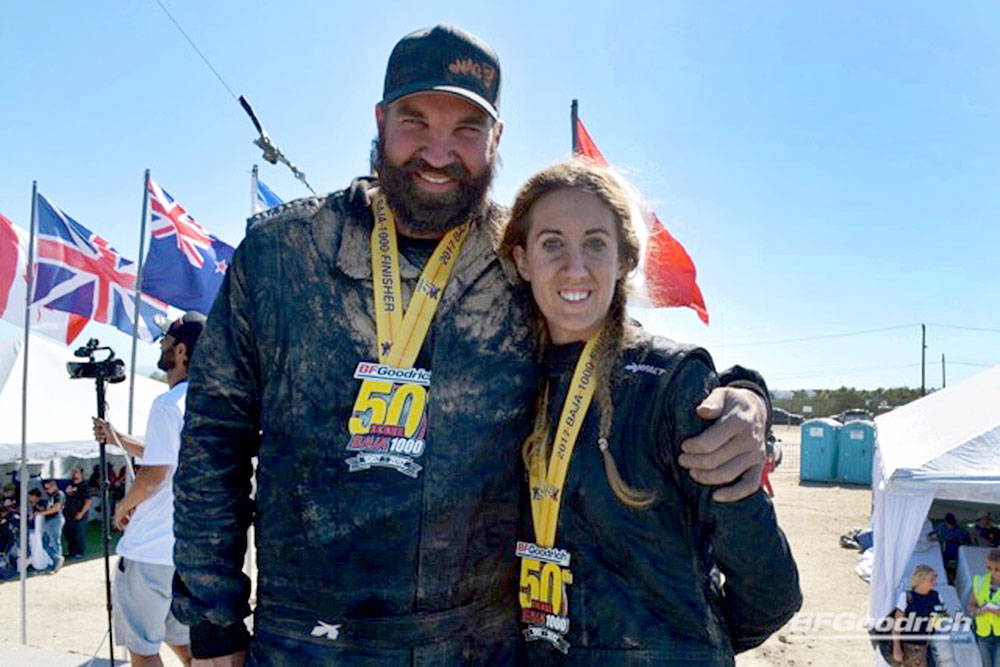 Competing in the Baja 1000 in Mexico was a dream come true for Langley driver Jason Vandenborn, with wife and navigator Kendall Ballantine.

No More Shootouts: Strong defence will be Canada’s backbone at world juniors