When a young bull comes out of the gate with an amateur cowboy on his back, Scott Waye knows class is in session.

The 32-year-old bullfighter from Hanna, Alta. teaches aspiring rodeo men and women how to handle the tricky art of fighting bulls, in collaboration with the bull riding school in Maskwacis, near Ponoka.

The school sees 20 to 25 bull riders attend each year, testing their mettle against inexperienced bulls, and 10 to 15 bullfighters, who learn how to protect fallen riders from marauding bovines.

“It’s really a crash course,” Waye said. “It’s darn sure you don’t learn everything you need to know in three days.”

In Waye’s school, he teaches young bullfighters how to distract bulls so fallen riders can get away without injury — hopefully well enough that they can go and practice safely on their own. It’s a mixture of speed, positioning and learning to use the bull’s mass against itself. It’s difficult and dangerous, and Waye wouldn’t want to do anything else.

“It’s unlike anything else out there,” he said. “I tell everyone that’s new, you’re never going to forget the first time a bull stares you down and comes at you wanting to hook you.”

For Waye, the first time was when he was 15. At that time he was hoping for a career in bull riding, but his lanky physique stopped him. (Waye is 6’6” tall — possibly the tallest bullfighter in North America.) As a replacement for riding, he tried out three bullfighting schools.

It stuck, and 17 years later, Waye is one of the top bullfighters in Canada. He makes the same amount of money protecting bull riders as a CFL football player does in a year, and he’s travelled throughout the country to be part of rodeos. But that’s not what Waye loves about his job.

“It’s pretty neat to … be able to buck a set of bulls and everybody gets away safe, knowing that it’s you that helped everybody out to be able to go on to the next rodeo,” he said. “It’s kind of a self-rewarding type thing.”

Of course, it doesn’t always work out that way.

In February 2016, Waye was run over by a bull at Canada’s inaugural Bullfighter’s Only event in Red Deer, a competition strictly between the bulls and the bullfighters. In his first run, a bull scooped him up and ran over him. Waye dislocated his shoulder and shattered it.

It happened in a competition, but it could have just as easily happened while Waye was at a rodeo, protecting a bull rider.

“Sometimes you’ve got to put yourself out there and get hurt to help someone else,” he explained. “So if you’re not passionate about it, your probably not going to do it, and then someone’s going to get hurt because of that.”

Waye has passion in spades, and after 17 years now has the experience to back it up. It’s why he holds a bullfighter school every year, and why he was finally able to get into the Cloverdale Rodeo two years ago.

“You don’t just come in, guns a-blazing, and take everybody’s job,” Waye said. “I had to wait for [longtime bullfighter] Scott Bryne to retire to go to Cloverdale.

“It’s an old boys’ club, I guess. As long as you do a good job, those committees are going to keep hiring you back.”

This upcoming rodeo will be Waye’s third time in Cloverdale, and a first for his kids, who are five and two.

“My little girl, she wants to go everywhere with me,” he said. “She’s old enough she can handle it. She doesn’t want to stay home ever, she wants to come with me.”

His kids are a signal that his time as a top bullfighter is coming to a close.

“I’m definitely at the tail end,” Waye said about his career. “I don’t get homesick, but I do get grumpy that I’m missing my kids growing up, I guess.”

“I’ve done what I want to do,” he continued. “Now I’m just riding the waves because I’ve worked so hard to get to where I am.” 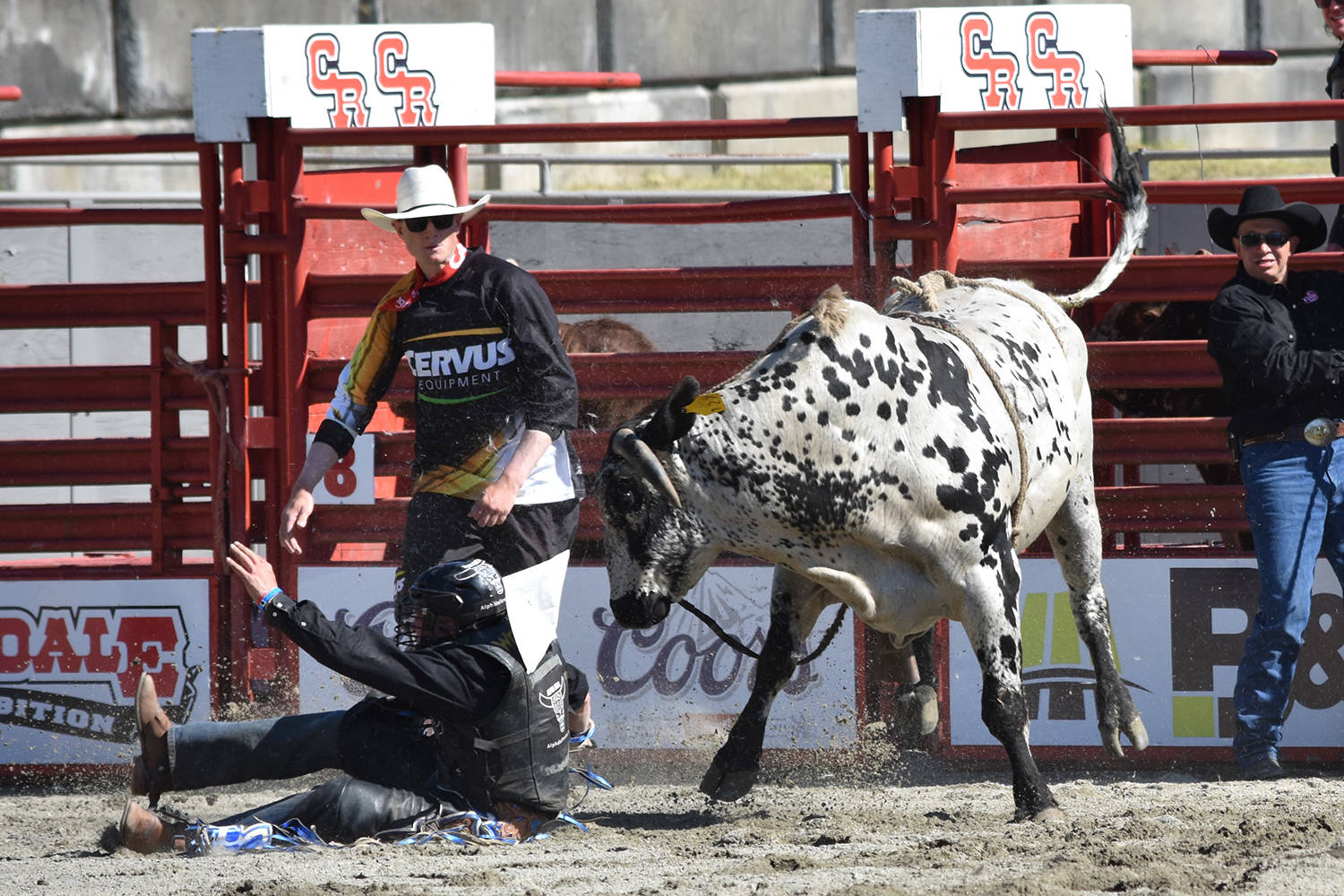 Bullfighter Scott Waye will be coming back to the Cloverdale Rodeo for his third year in 2018. (Grace Kennedy photo)