He may no longer be playing in Langley for the Vancouver Giants, but Ty Ronning made a lasting impression on the players and fans he leaves behind in British Columbia.

The lead scoring forward, who hails from Burnaby, prepares to play with New York Ranger’s affiliate team this weekend in Connecticut, he received news he has been picked as the Western Conference’s humanitarian of the year.

Now, on May 2, before a crowd in Red Deer, Alta. he’ll look to capture the Western Hockey League’s Doug Wickenheiser Memorial Trophy. This latter award honours players’ humanitarian efforts from throughout the league. This year, Ronning is up against Regina Pats forward Matt Bradley for the league title.

After establishing a new franchise record of 61 goals during the 2017-18 season, Ronning’s historic WHL career came to an end last Tuesday in Victoria.

Consequently, last weekend Ronning joined the Hartford Wolf Pack of the American Hockey League and will be back in action Friday night at 4:15 p.m. (PT) against the Binghamton Senators.

His impact within the Vancouver Giants organization will continue to be felt for many years to come thanks to his exemplary work within the community, said Giants play-by-play broadcaster Dan O’Connor.

“His desire to spread kindness and do good for others has forever etched the overage forward as a fan and community favourite with the Giants organization.”

Ronning has volunteered his time at the Vancouver Giants hockey school and the team’s Read to Succeed Initiative.

Additionally, Ronning spent extra time on the ice at the team’s Family Day skate in an effort to leave a positive impact on his community.

In classrooms regularly, Ronning took time out of his schedule to speak with students at Our Lady of Sorrows School and St. Helens Elementary, discussing the importance of perseverance and strong work ethic.

Ronning’s positive contributions to the community can be exhibited in two cases, O’Connor elaborated.

Earlier this season, he received a letter from a fan in Burnaby. Instead of simply writing back, Ronning personally delivered a Giants’ jacket to the young fan’s house.

The New York Rangers prospect also developed a friendship with another Giants fan.

“As the former high school classmates continued to reconnect, Ronning welcomed the fan as a guest at Giants games throughout the season. The efforts and generosity from Ronning has served to further engrain a love for hockey within this fan,” O’Connor said.

Ronning’s continued commitment to fans of all ages and his “uplifting approach” to the surrounding community has established a culture of positivity on and off the ice within the Giants’ organization. 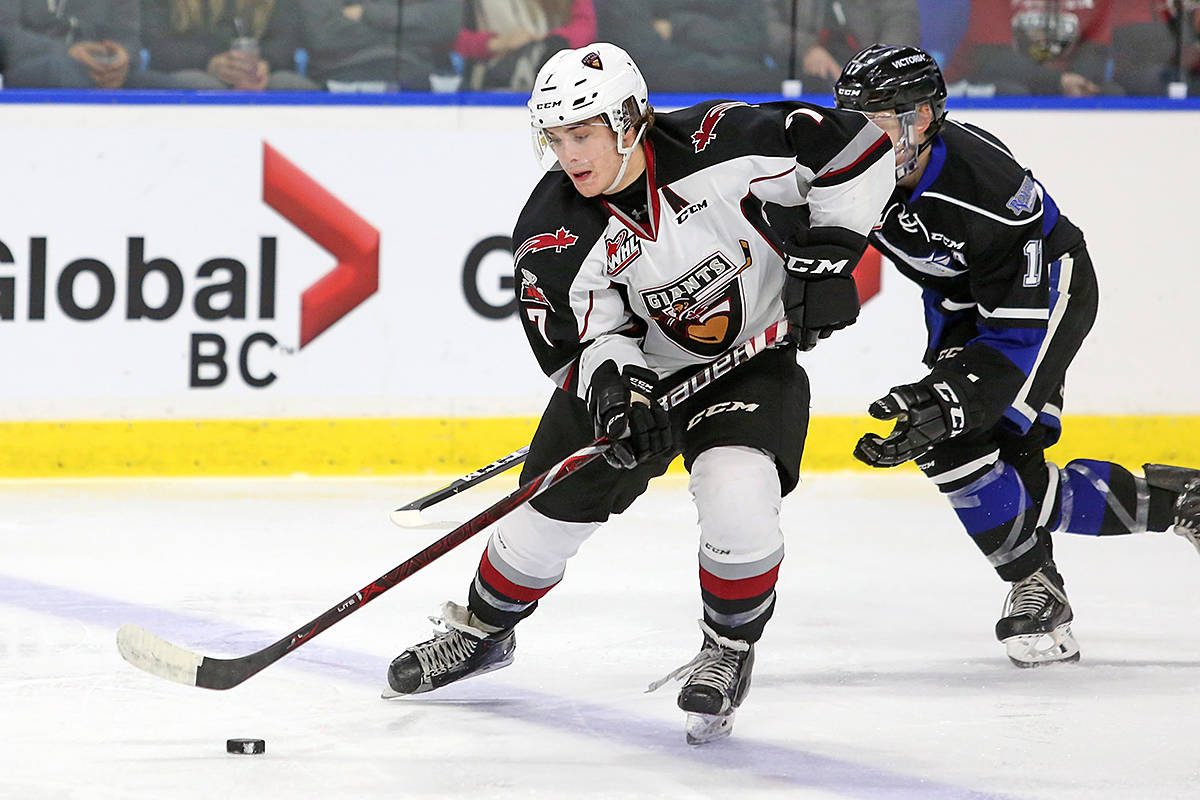 Former Vancouver Giant Ty Ronning has been selected as Western Conference humanitarian of the year, and is in the running for the WHL title, as well. (Chris Relke photos)