Twenty minutes — that is the furthest apart Tate and Zach Wyatt have ever crossed the finish line.

Of course, it wasn’t really a ‘finish line’ but rather the day the twin brothers were born 17 years ago, with Tate entering the world first.

Other than that, the tandem are typically running step-for-step, usually completing their races less than two seconds apart.

Earlier this month, Zach took top spot at the B.C. high school cross-country championships at Vancouver’s Jericho Beach, finishing the 6.9-kilometre race in 23:17. Right on his tail was Tate, who clocked in at 23:18.

These days they train with the Langley Mustangs track and field club.

Coming from a soccer family — all three play or played the game, including their father, Dave — an ability to run was never an issue. They even have the runner’s build — long legs and a slim frame.

The switch in sports meant the brothers would now be chasing the same goal.

“Competing against my brother, we are really close (so) sometimes it is hard when you come second,” Tate explained. “But at the end of the day, (I’m) competing against someone who is equally as fast as me, if not faster.

“Sometimes it is kind of bittersweet if your brother wins and you come in behind him,” he added.

And when it comes to head-to-head, Zach has got the better of his sibling in their last four major high school races — two earlier this fall during cross-country season and then two last spring as part of the track and field season.

Last month, Zach won bronze at the Fraser Valley cross-country championships with a time of 15:27, two seconds ahead of Tate’s 15:29 and fourth-place finish. And then a few weeks later, the Wyatts finished one-two at the B.C. high school championships, with Zach again winning gold.

But the biggest gap between the two wasn’t the time difference in a race, but what it meant. It happened as both brothers were gunning for a spot on Team BC for the Canadian Legion track and field championships.

Zach won the race by 1.5 seconds, but placing wasn’t the only thing that mattered — they also had to beat a certain time standard, which Zach did but Tate did not.

The result earned Zach a spot on Team BC. Tate would still attend the Legion championships, but he ran under his club banner, the Langley Mustangs, instead of side-by-side with his brother on the provincial team.

“I am not going to lie, it was really tough,” admitted Tate about falling 0.6 seconds short of the required time.

“It was probably the worst part of the track season. Even though I got a personal best, it was really hard to take.

”I remember being angry and annoyed because I knew I had it in me to make it. I just hadn’t done it.”

Zach was in the unfamiliar position of going somewhere without his brother.

Did it lead to bragging or any awkwardness?

“We are really close, so I could have talked to him, but we both knew,” Zach explained. “And it really did suck — I was trying to lead him through, I really wanted both of us to be on the team. It would have been a great experience.”

Since they were not teammates for the Legion track and field championships, Zach flew with the rest of the Team BC squad to the competition, which was held in August in Brandon, Man., while Tate arrived a few days later.

The brothers had not spent that much time apart before, but once they got on the track, they were reunited on the podium, with Zach taking gold in the 2000m steeplechase and Tate the silver. They were separated by less than four-tenths of a second as Zach crossed the finish line in 6:02.38 and Tate a half step behind at 6:02.72.

“To stand there, me and my brother, with the (B.C.) flag around our shoulders, I am definitely never going to forget that moment,” Zach said. “That is my biggest accomplishment so far, winning that race.”

For Tate, missing the mark to make the provincial team served as fuel to drive him harder.

“Not making the team motivated me more,” he said. “I was motivated every day to get out and run, no matter how I was feeling.”

The Wyatts did both make the BC Athletics youth team, thanks to their top-four (Zach was third, Tate fourth) at the B.C. provincial championships last month. That earned them a ticket to Kingston, Ont. for the Canadian championships over the weekend.

The race did not go as planned as a sudden change in weather turned the course into a slippery, muddy mess and the Wyatts did not have the right length of spike to properly navigate the terrain and finished well back.

And while that may have been disappointed showing, the Wyatts want to keep running together for the foreseeable future.

Some schools have started calling around, hoping to land the brothers. And while they are open to heading their separate ways, they also know the benefits of staying together, such as being each other’s sounding board, training partner and having one another to combat any adjustments from being away from home.

“I don’t really want to go to a separate school, as much as he can get on my nerves sometimes.” Tate said. “It is beneficial for us to train together.” 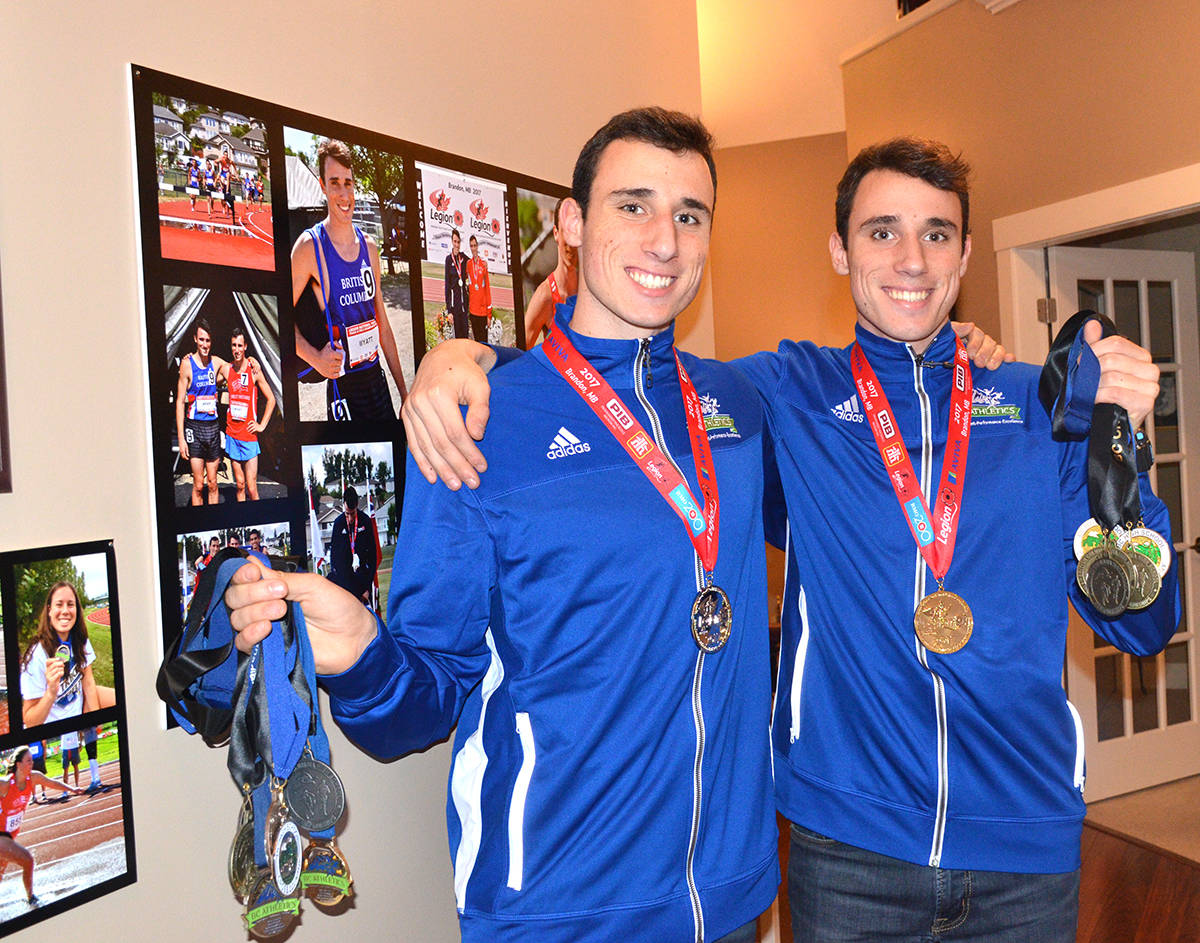