It may have been the most dramatic teddy bear toss victory in the 18-year history of the Vancouver Giants.

With only a minute and 19 seconds remaining in the third period trailing by a goal, Giants defenceman Bowen Byram scored the 2018 teddy bear toss goal for the G-Men, sending a crowd of more than 9,000-strong at the Pacific Coliseum into a frenzy, said Giants play-by-play broadcaster Dan O’Connor.

Former Victoria Royal now Giants captain Jared Dmytriw then won the game for Vancouver at 3:02 of overtime on a breakaway giving the Giants a 2-1 come-from-behind win over the Victoria Royals (13-12-1-0).

Royals sophomore forward Tarun Fizer had the Royals lone goal, which came at 13:29 of the third period.

For the Giants it was their seventh win in a row and helped them improve their record to 21-6-2-0 on the season.

They outplayed and outshot the Giants by a wide margin to the tune of a 14-4 shot count.

Giants starter David Tendeck was very sharp stopping all 14 shots he faced, while Royal’s netminder Griffen Outhouse went four-for-four at the other side.

“His night would get busier in periods two and three.”

The Giants responded in a big way outshooting the Royals 17-5 in the middle frame, yet neither goaltender blinked.

Tendeck went five-for-five for the Giants while Outhouse was “sensational” at the other end for the Victoria Royals, O’Connor explained.

For a second straight season, the Giants went into the third period of a teddy bear toss game tied 0-0.

Fizer notched his fourth goal of the season at 13:29 of the final period to give the Victoria Royals the 1-0 cushion.

Then, with time winding down in the game the Giants 2017 teddy bear hero made history.

Byram snuck in from the left point and one-timed a Dmytriw feed past Outhouse at 18:41 to tie the score.

For Byram it was his ninth goal of the season. He’s also the first Vancouver Giant to record multiple teddy bear goals.

Shots were 16-6 in the third period and for a second time in five meetings, overtime would be needed to determine the winner between the two B.C. division foes.

Dmytriw ended the game 3:02 into overtime when Kaleb Bulych broke up a play in the defensive zone, and then sent him in on a breakaway rush.

Dmytriw moved into the slot and wired a shot up and over the left shoulder of Outhouse, securing the 21st victory of the season for the Vancouver Giants.

For Dmytriw it was his seventh goal of the season.

• Giants next game: Friday night at home against the Everett Silvertips. 7:30 puck drop.

• Saturday’s win was the first overtime victory of the season for the Giants who were previously 0-2 in overtime.

• Bowen Byram’s third period goal moves him into a first place tie with Moose Jaw’s josh Brook for the WHL lead in goals for defencemen. Byram and Brook each have nine.

• Davis Koch extended his point-streak to 10 games with an assist on Byram’s teddy bear goal. Koch has now notched six goals and 11 assists for 17 points during that 10-game span. Koch had one previous 10-game point streak that he achived during the 2016-17 season with the Edmonton Oil Kings.

Those game-worn autographed jerseys are available for purchase until Dec. 12, via online auction.

Proceeds from the auction go towards the CKNW Kids’ Fund. 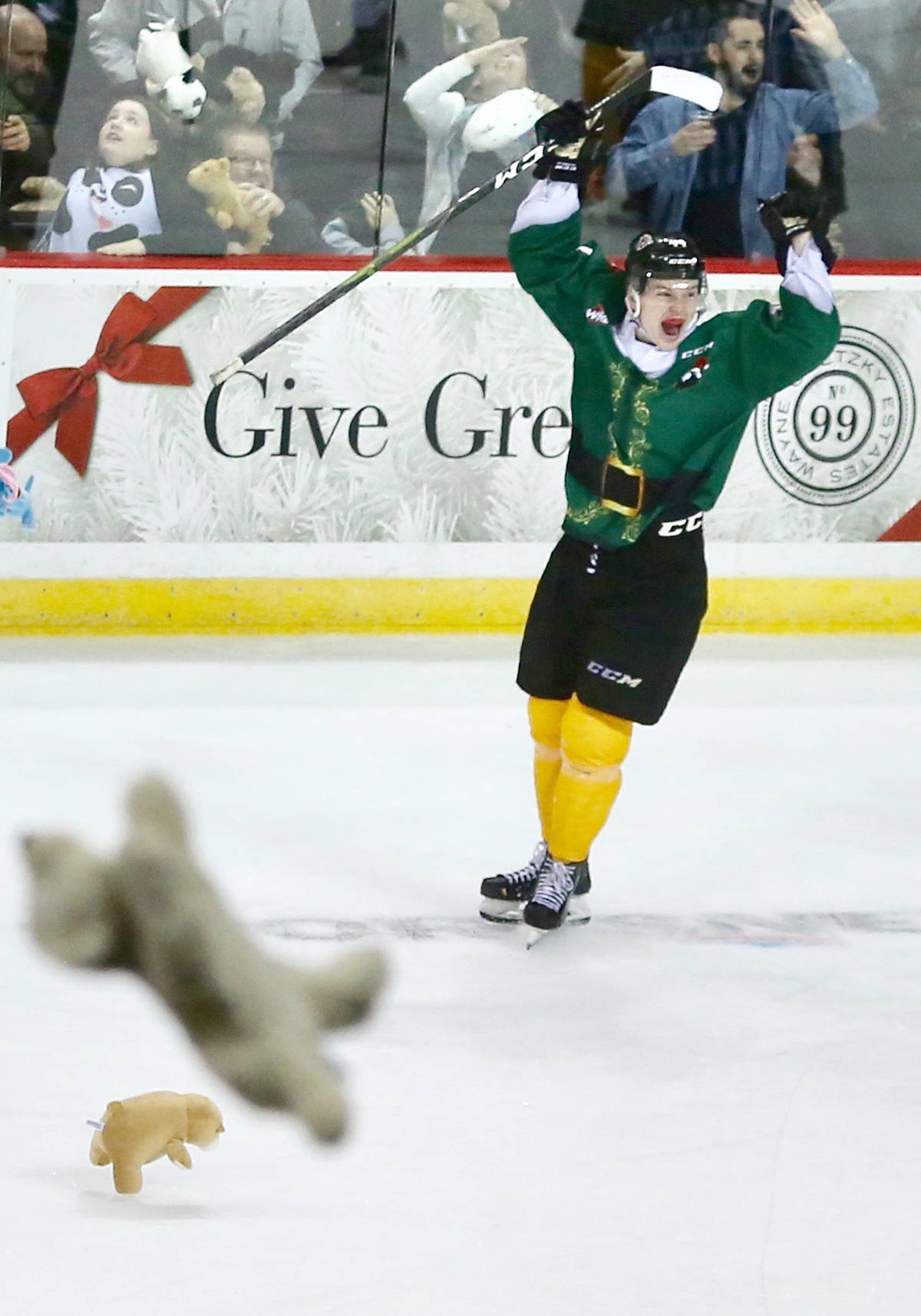 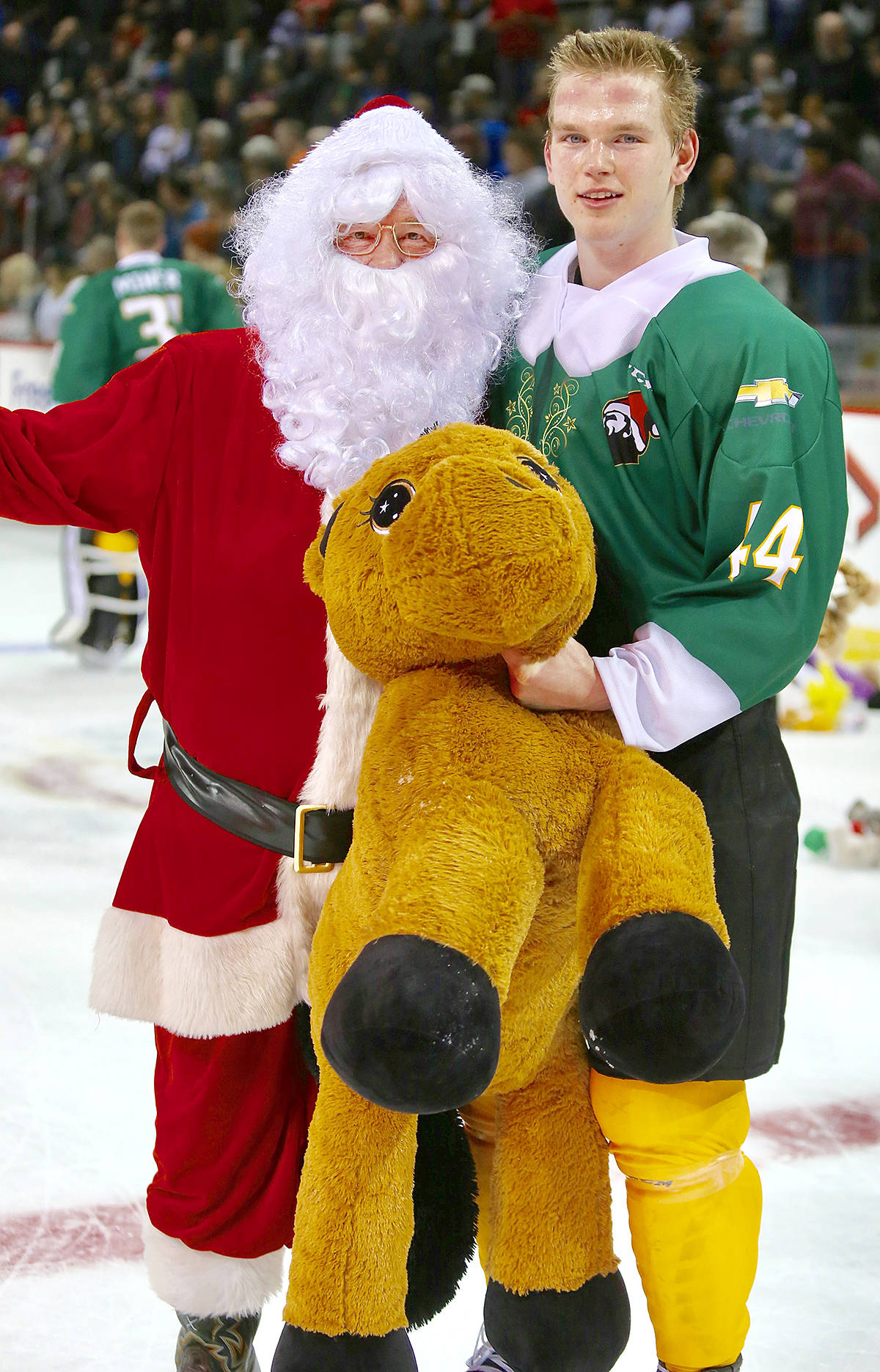