Ask any coach or player and they will preach the importance of discipline and special teams in the playoffs.

On Tuesday night in game three of the WHL quarter-final series between the Vancouver Giants and Victoria Royals, both were factors.

Vancouver was undisciplined but emerged relatively unscathed while Victoria took an unnecessary penalty and surrendered the eventual game-winning goal on the ensuing power play.

Giants captain Tyler Benson one-timed a slap shot from the blue-line in the final minute of the second period, for what turned out to be the game-winning goal in his team’s 5-1 victory. Vancouver leads the best-of-seven series two games to one.

Following the goal, Benson waved at the Victoria penalty box, where the Royals’ Jeff de Wit had been banished following an after-the-whistle infraction for knocking down the Giants forward after the whistle.

“I didn’t like the play and I guess the feelings were still high,” Benson said with a smile.

Conversely, Victoria had a great chance to get back in the game, thanks to a five-minute major and game misconduct to Matt Barberis at the second period buzzer.

But the Royals’ Noah Gregor knocked it down to a three-minute man-advantage after getting whistled for skating away with Bowen Byram’s stick tucked under his arm.

Had Victoria scored even once on that extended power play, who knows if the outcome might have been different.

“It’s that time of year when emotions are high,” said Vancouver coach Jason McKee. “You have to get your nose in there. You can’t back down but you have to toe the line but not cross it.

“Tonight we crossed the line a couple of times … some poor decisions that we will have to clean up. We took too many penalties and that will be addressed.”

Vancouver would surrender a power-play goal later in the period, but by that time it was already 4-0.

“We know they have skilled players who are going to make us pay if we keep giving them opportunities,” he said.

Through the first three games, Victoria is 2-for-14 on the power play compared to Vancouver’s 1-for-8.

The Royals are, however, missing both Tyler Soy — who has yet to play in the series — and Tanner Kaspick, who was hurt in the third period of the second game, two of the team’s top five regular season scoring leaders with a combined 61 goals and 156 points.

Victoria head coach Dan Price said his team isn’t focusing on who they are missing, employing the ‘next man up’ philosophy as they have done all season.

While the Royals are still waiting for key cogs to return — they are also missing one of their top defenceman in Scott Walford — game three saw David Tendeck make his post-season debut.

The Giants goaltender played for the first time since March 11 and didn’t look like he missed a beat, making 35 saves, including a pair of breakaway stops, to be named the game’s first star.

“He was unreal, he really held us in there and gives us a lot of confidence,” Benson said.

Victoria did have three glorious opportunities in the first period, which could have altered the game’s outcome.

The first saw the Royals steal the puck from Tendeck behind the net but with a yawning cage staring at him, Victoria’s Kaid Oliver misfired on his attempt. The game was still scoreless at that point.

A few moments after Owen Hardy opened the scoring, Victoria’s Dante Hannoun and Noah Gregor had a two-on-zero short-handed breakaway from their own blue-line. After two quick passes to get Tendeck moving, Hannoun’s shot was gloved by the Giants goalie.

And later on in that frame, Matthew Phillips appeared to have tied the score. Initially ruled a goal, the referees went to video review and it was determined the puck was kicked in.

The Royals controlled much of the first half of the second period, firing 12 pucks on the Giants net in the first nine minutes of the frame, compared to just one shot for Vancouver.

But Tendeck was up to the task — and quick to deflect credit.

“We are playing great as a team,” he said. “Everyone is bringing something to the table (and) that is how you win games in the playoffs and we are doing a great job on that.”

Through the first three games of the series, Vancouver is winning the goaltending battle.

With Trent Miner manning the crease in games one and two, and with Tendeck’s game three numbers, the Giants have a 2.36 goals against average and a .932 save percentage.

By comparison, Victoria’s Griffen Outhouse’s numbers are 3.69 and .893.

The Giants will be without both Barberis and fellow blue-liner Darian Skeoch for game four.

Barberis was handed a one-game ban on Wednesday for his major. Skeoch will serve the final game of his three-game ban in game four and both are eligible to return for game five.

Game four is set for March 29 at the LEC with a 7 p.m. puck drop. The game will be broadcast nationally on Sportsnet.

The crowd was announced at 4,683, the second highest attendance at the LEC this season.

Benson said the players were able to feed off the home support.

“It was huge for us tonight. The noise in the building got us going right from the start,” he said.

“The more we keep winning the more fans we are going to get. It is really cool for us, We want to keep getting good crowds, it helps us in the games and it helps us win.”

The series returns to Victoria for game five on March 31. 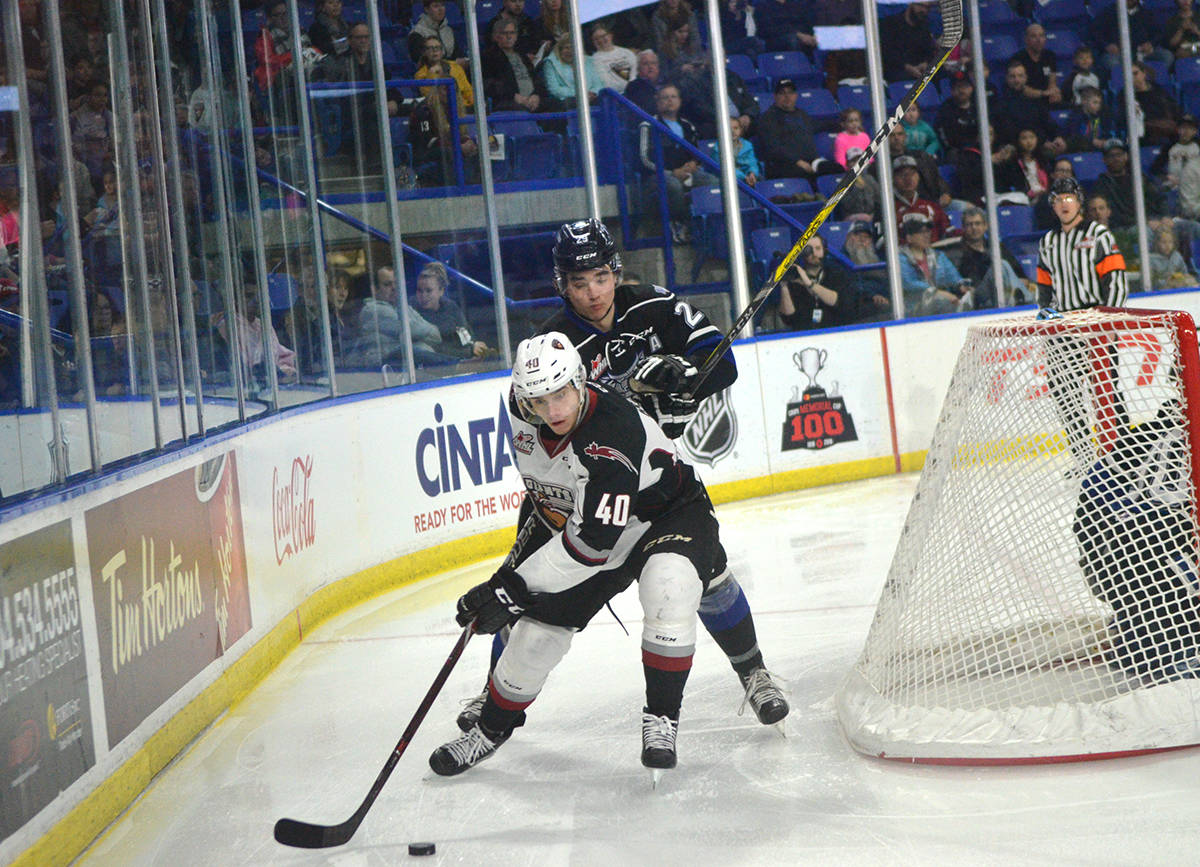 Milos Roman had a goal and two assists and leads all Giants players with three goals and five points through three games of the team’s playoff series. Gary Ahuja Langley Times 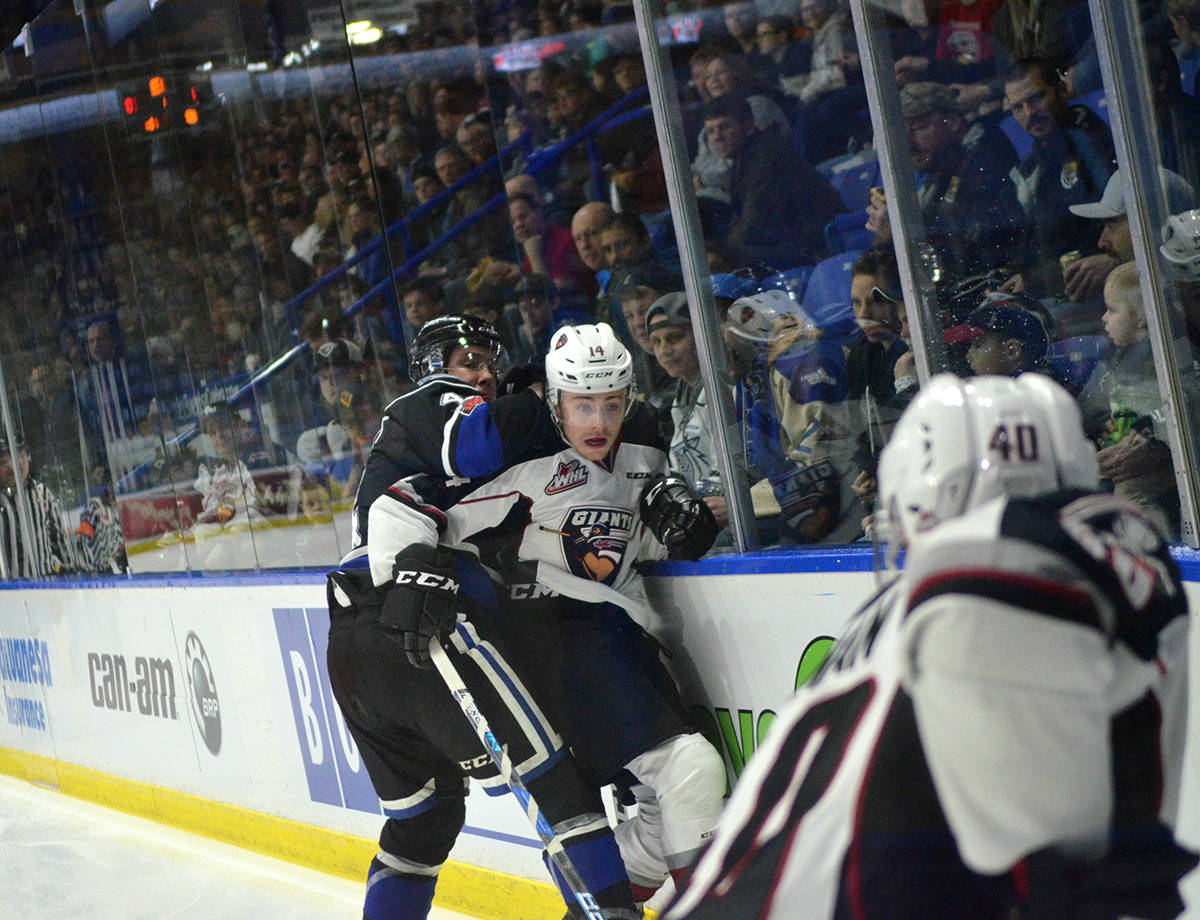 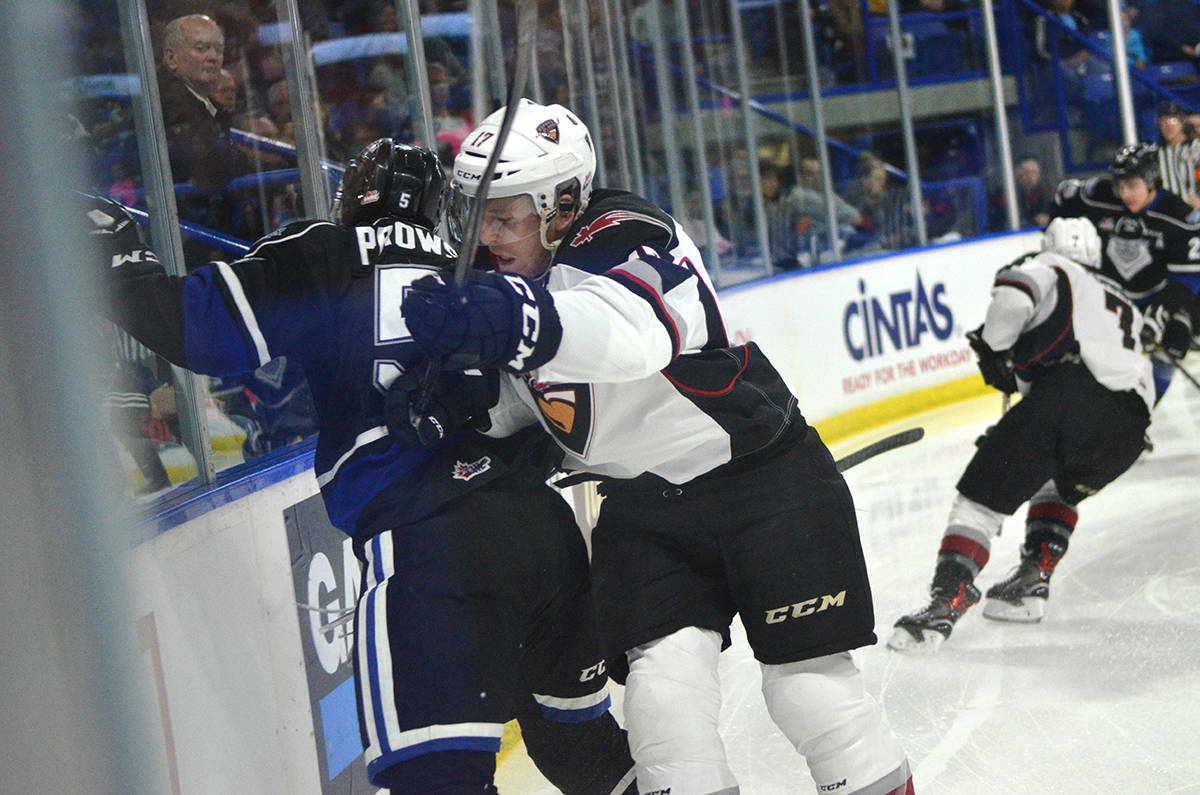