There is no secret, says James Malm.

But the Vancouver Giants centre definitely has a knack for scoring the important goal.

Malm snapped a 2-2 tie with a dozen minutes to play on Saturday night at the Langley Events Centre as the Giants edged the Kelowna Rockets by a 3-2 score.

It marked the ninth time — out of 17 goals — Malm has struck for the game-winning goal this season.

The nine game-winning goals lead the entire Western Hockey League, snapping a tie between Malm and Moose Jaw’s Jayden Halbgewachs, who has eight-game winners among his league-leading 47 goals.

“I wouldn’t say there is any secret, I am just scoring goals at the right time,” Malm offered after his latest winner.

He also spoke after Giants practice earlier this week on the subject.

“Obviously every goal is big in this league but to get a game winner, is a different feeling than a regular goal,” he said.

He also admitted to keeping tabs on who was leading that particular category — “I would be lying if I said I hadn’t looked a couple times.”

In Saturday’s game,Vancouver had a good start but penalty troubles changed the momentum as the Giants found themselves down a man three times in the opening 20 minutes.

But despite facing the league’s third best penalty kill, Vancouver escaped the period with neither team scoring.

The Rockets were able to use their power-play time to take over control and that carried over to the second period when Langley’s Connor Bruggen-Cate opened the scoring for the visitors with his 10th of the season.

At that point, the Giants had seen an 8-4 shot advantage in the first period flip to 18-8 in favour of Kelowna. And it took until the 8:35 mark of the middle stanza — while on the power play — for the Giants to generate a shot on goal, and the equalizer. Owen Hardy took a pass in front from Malm and after being denied on his initial chance, he buried the rebound for his 10th.

Seventy-two seconds later, Hardy set up Ronning, who was stopped by James Porter, before scoring on the rebound for his 40th of the season and all of a sudden, the Giants had a 2-1 lead.

The Rockets would tie the score at two less than four minutes into the third as Leif Mattson’s sent the puck towards the net with the puck deflecting off Brennan Riddle’s stick and past David Tendeck.

Last season, that goal might have signalled the start of a spiral for the young Giants squad.

In fact, shortly after the tying goal and before Malm’s winner, Kelowna’s Kole Lind — a Vancouver Canucks draft pick who is generating quite a bit of buzz in the Lower Mainland — had a great opportunity for the go-ahead goal.

But Tendeck, who was down and not squared up to the shooter, managed to lift his pad and get a piece of the puck.

“I was scrambling and just knew I had to stop it, to keep the boys in the game,” he said.

With his 28-save performance, Tendeck improved his goals against average to 2.93 (third in the league) and his save percentage to .911 (tied for ninth).

“They get a lucky break off our stick to tie it, but once again, these guys stay the course and they found a way to win the game,” he said. “That’s what it is all about and our guys are finding a way to do that right now.”

“I think everyone in that dressing room has learned how to win games,” Malm added “It is hard to win games in this league and we weren’t used to it before but I think we are now.”

Malm and Hardy each finished with a goal and an assist, while Dawson Holt had a pair of assists.

Up next for the Giants — who are on an eight-game home stand — are the Victoria Royals on Jan. 19 at the LEC.

The Royals are two points back of Vancouver following Saturday night’s action. 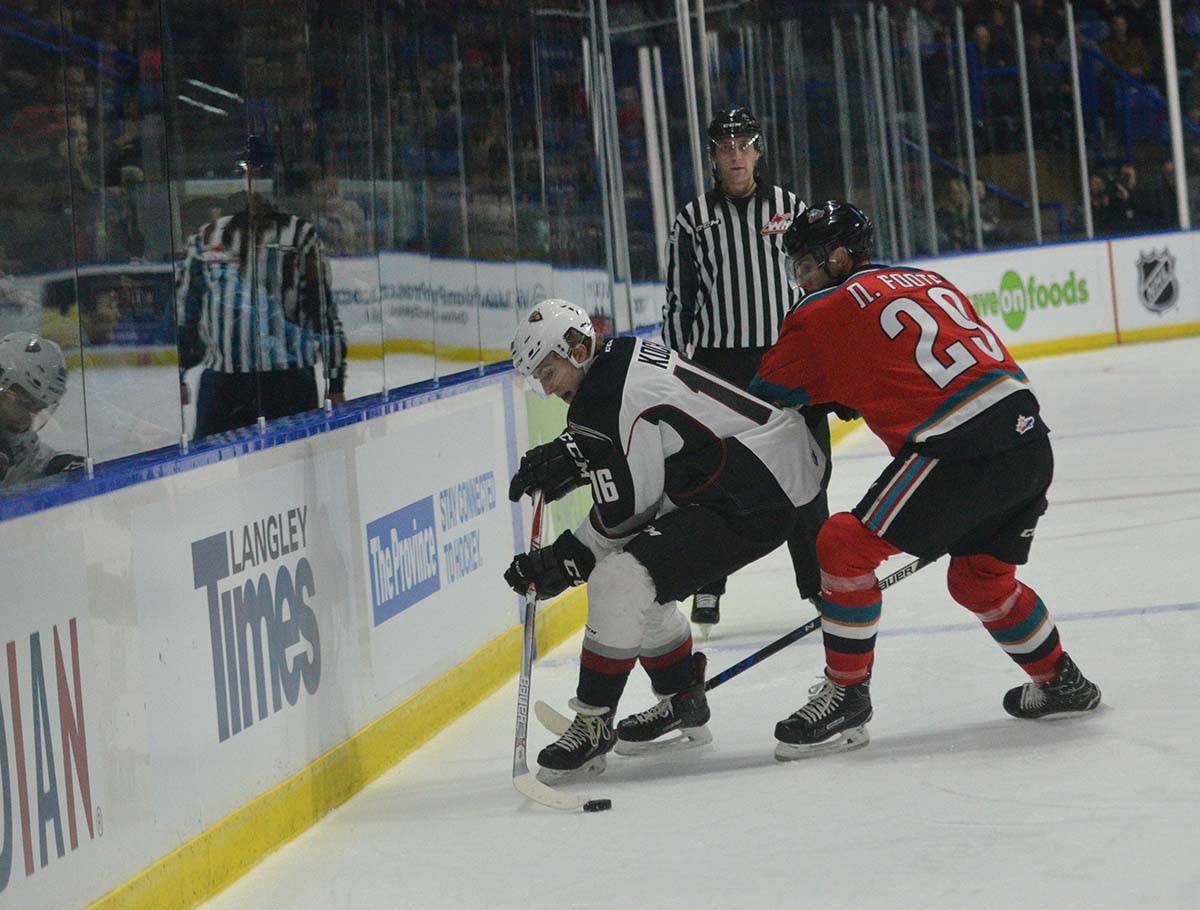