In front of the largest crowd to ever watch a hockey game at Langley Events Centre, the Giants staved off elimination thanks to a 4-3 victory over the Prince Albert Raiders.

The two teams hit the ice on Friday night at Langley Events Centre with a crowd of 5,033 on hand for Game 5 of the Rogers WHL championship series and the Raiders up three games to one. But the Giants denied Raiders’ quest to capture their first Ed Chynoweth Cup in 34 years, sending the series back to Prince Albert for Game 6 on Sunday, and if necessary, Game 7 on Monday.

“We put the effort forward and stuck with it,” he said, adding his team could have easily been deterred when they gave up their lead three minutes after opening the scoring and then falling behind 2-1 2:45 into the middle stanza.

Instead, Bowen Byram tied the score 50 seconds later and Davis Koch and Plouffe struck for goals 1:49 apart to give the Giants a lead they would not relinquish.

“It would have been easy to veer away when they tied it,” Dyck said.

“(But) that’s what they guys have done all year long, they have stuck with it, they believe in what we are doing and believe, more importantly, in each other and themselves. And when you do that, good things typically happen for you.”

“I think we showed a lot of character tonight, obviously with it being the first time we were facing elimination in the playoffs,” Byram said.

“We went nose-to-nose with them tonight and proved we can win. We just have to do that a couple more times,” he said.

The teams were tied at one following 20 minutes with Brayden Watts scoring first for the Giants before Prince Albert’s Aliaksei Protas responded for the visitors just over three minutes later. Both goals came off juicy rebounds in the slot.

The Raiders went ahead 2-1 early in the third when Dante Hannoun capitalized on a turnover behind the Giants goal, but for the first time this series, a team was able to rally from a deficit to earn the victory.

And following Vancouver’s three second-period goals in a span of 7:38, Noah Gregor got the Raiders back to within one.

But David Tendeck stopped the final 19 shots he faced, including 15 in the third period alone when Prince Albert outshot Vancouver 15-5.

Plouffe, who had the game-winning goal, also came up with a huge defensive play to preserve the lead with less than seven minutes remaining.

On the play, Brett Leason (who is tied for the playoff scoring lead with Byram at 25 points apiece) had a step on Plouffe, but the defenceman dove to knock the puck off his stick, preventing what would have been a clear-cut breakaway.

“I didn’t make the one-on-one play I wanted to right off the bat, so I was just looking to do something not to allow him to get the shot and made a diving play and got my stick on it,” Plouffe explained afterwards.

All four goals Vancouver scored on Friday came at even strength, the first time they had scored at five-on-five since game one.

In fact, entering the game, goaltender Ian Scott had allowed just two goals during the last 10 periods of the series, posting an impressive .978 save percentage. But for the first time since game one, the Giants were able to score at five-on-five, scoring all four goals at even strength.

“Scoring early got the crowd into it and gave us lots of energy and lots of momentum,” Dyck said.

On the Raiders end of things, head coach Marc Habscheid felt his team wasn’t at their best on the night.

“Just OK in the first two periods. In the third, you saw the real Raiders there,” he said. “You don’t want to dissect too much. We pretty much know what we need to do or what didn’t happen tonight.”

The series now shifts back to Prince Albert, Sask. for Game 6, which takes place Sunday night (May 12) at 5 p.m. local time.

Back here at home, Game 6 has a 5 p.m. puck drop and the Vancouver Giants Booster Club will be hosting a watch party at Langley Events Centre. Admission is $15 and includes a buffet dinner and dessert. Doors open at 4 p.m.

VAN – Brayden Watts (7) opened the game’s scoring at 7:42 of the first period when he pounced on a Tristen Nielsen rebound and wired it by the pad of Ian Scott. Jadon Joseph secured the second assist on the play.

PA – Just over three minutes later the Raiders answered when Aliaksei Protas followed up a Sean Montgomery rebound and snapped it home for his 12th of the playoffs and his first goal of the series. Brett Leason had the second assist.

VAN – Exactly 50 seconds later the Giants tied it when Bowen Byram (8) ripped a shot by Ian Scott’s blocker and home to tie the game 2-2. Brayden Watts and Jadon Joseph both assisted on the equalizer.

VAN – Davis Koch restored the lead for the Giants at 9:24 when he knocked home his third of the playoffs off a Seth Bafaro rebound. Bowen Byram also assisted on Koch’s go-ahead goal.

VAN – Then at 11:13, Dylan Plouffe (6) buried the eventual game-winning goal when he one-timed home a feed from Dawson Holt from above the left-wing circle to make it a 4-2 game for the Giants.

PA – The Raiders moved back within one at 15:54 when Noah Gregor backhanded his 11th of the playoffs home from the slot area. Cole Fonstad and Ozzy Weisblatt assisted. That’s as close as the Raiders would get on Friday night as the Giants would keep the door shut from then on out.

With a pair of assists in tonight's game, @jadonj9 of @WHLGiants is the Player of the Game for Game 5 of the 2019 @Rogers #WHLChampionship Series!

• Byram and Brett Leason are tied for the playoff scoring lead as each has 25 points.

• Byram and Watts each finished with a goal and an assist, while Jadon Joseph also had a two-point game with a pair of assists.

• With the victory, Vancouver improved to 7-0 this post-season on Friday nights. The Giants finished with an 8-3 record on home-ice during the playoffs.

• For the second straight game, just three minor penalties were called with the Raiders receiving two power-play opportunities to the Giants one

• With two points each tonight, Bowen Byram (1G, 1A) and Brett Leason (2A) remain tied for the WHL playoff lead in scoring with 25 points apiece.

• The announced crowd of 5,033 is the largest crowd ever for a Vancouver Giants game at the Langley Events Centre.

• The Giants are now 10-0 when scoring four-or-more goals in a game.

RECENT COVERAGE: Raiders edge out Vancouver Giants 1-0 in Game 4 of the finals 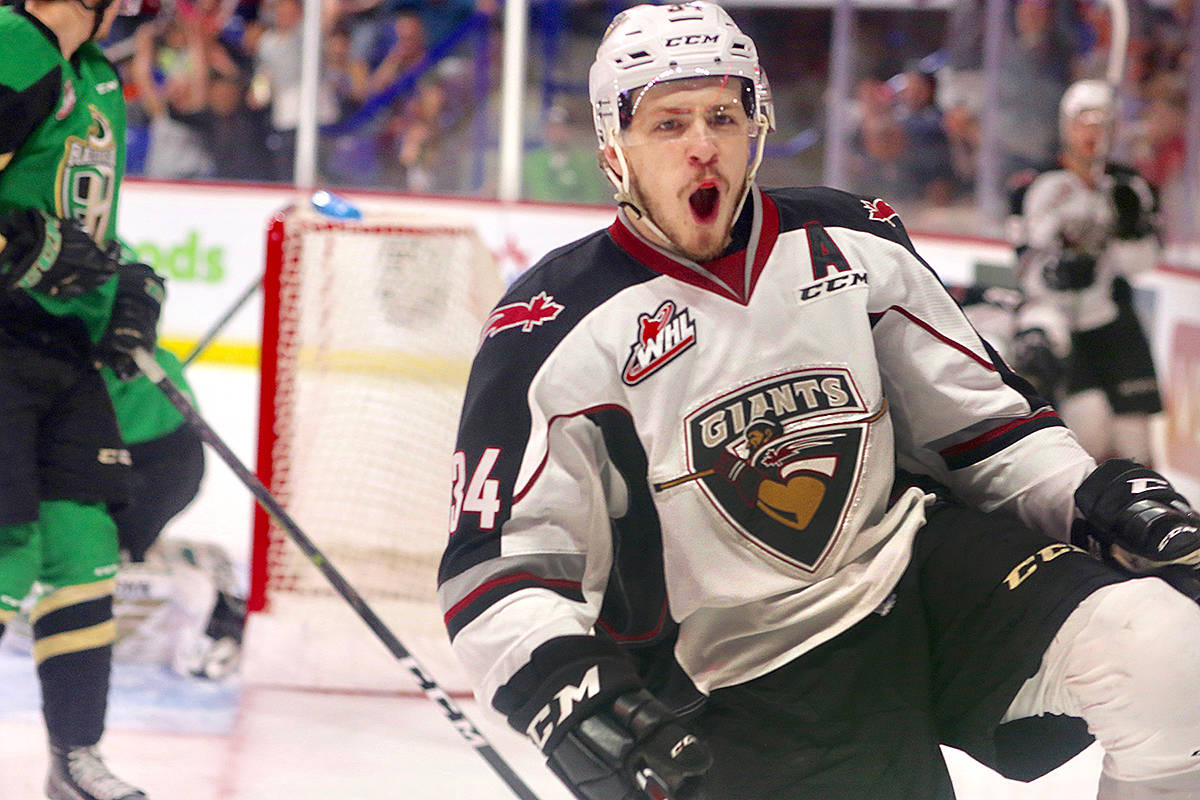 Before a record crowd at Langley Events Centre, the Vancouver Giants emerged triumphant in Game 5, keeping themselves alive to play another night – specifically Sunday night in Saskatchewan. The G-Men are now trailing 2-3 to the Prince Albert Raiders heading into Game 6 of the best-of-seven WHL (east vs. west) championship series. (Rik Fedyck/Vancouver Giants) 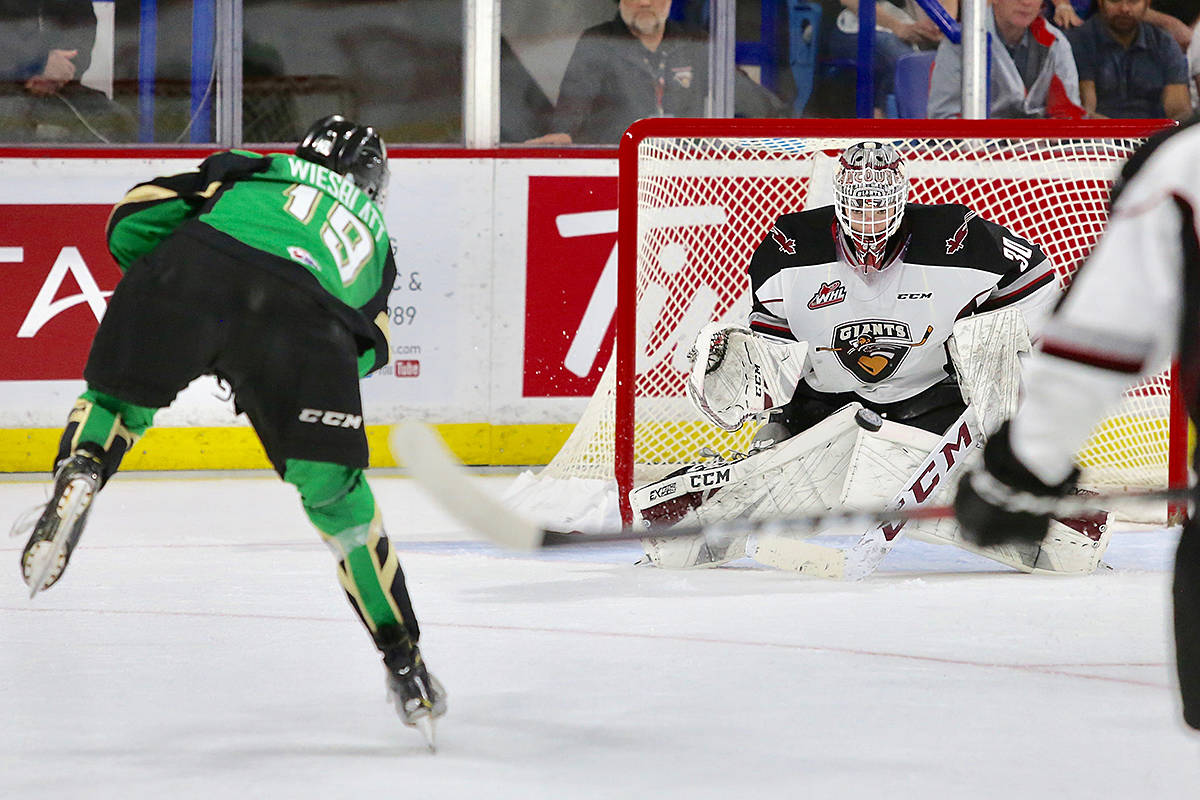 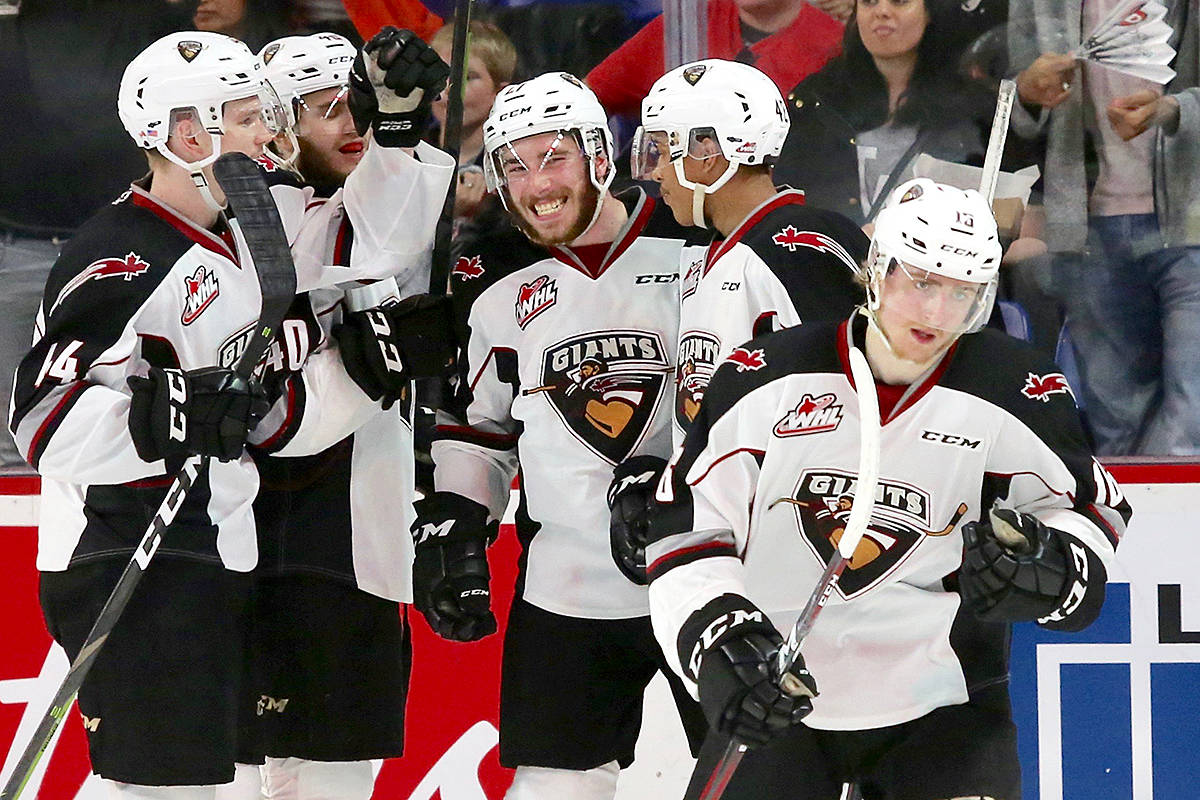 VIDEO: Giants stave off elimination with 4-3 win at home