Sea Spray earned their first win of the season while the Grizzlies improved to 3-0 on the Arena Lacrosse League West Division season after both teams were victorious on Sunday afternoon, Nov. 27, at Langley Events Centre.

Facing an 0-3 hole to start the season, the Sea Spray went on a 4-0 run to force overtime before Jared Moloci’s second of the game was the winner in sudden-death overtime in a 14-13 win over the Black Fish.

“I saw short side was open a lot that entire game. The shift before, I missed it, but I knew I could get it if I had the open chance again and ended up burying it,” Molici said of the game-winner, which came at 8:28 of the overtime period.

The Sea Spray won despite being out-shot 66-50 for the game, including 7-4 in overtime as the Black Fish had a power-play opportunity in the extra period. But Lee Jackman was solid in the Sea Spray net, finishing with 53 saves.

The game began great for the Sea Spray as they led 6-3 after a quarter before the Black Fish battled back to lead 9-7 at the half and 10-9 after three quarters. The Black Fish would extend the lead to 12-9 with just over 11 minutes remaining but Bell and Vinny Ricci scored goals 18 seconds apart on a five-minute power play and Trevor Funk and James Rahe added tallies 31 second apart to give them a one-goal with 4:06 to play. Brian Gillis responded for the Black Fish to force the extra period.

“That was a huge win. The difference psychologically between 0-3 and 1-2 is big. We knew today was our strongest line-up that we have had so far this year,” said Sea Spray coach Russ Heard. 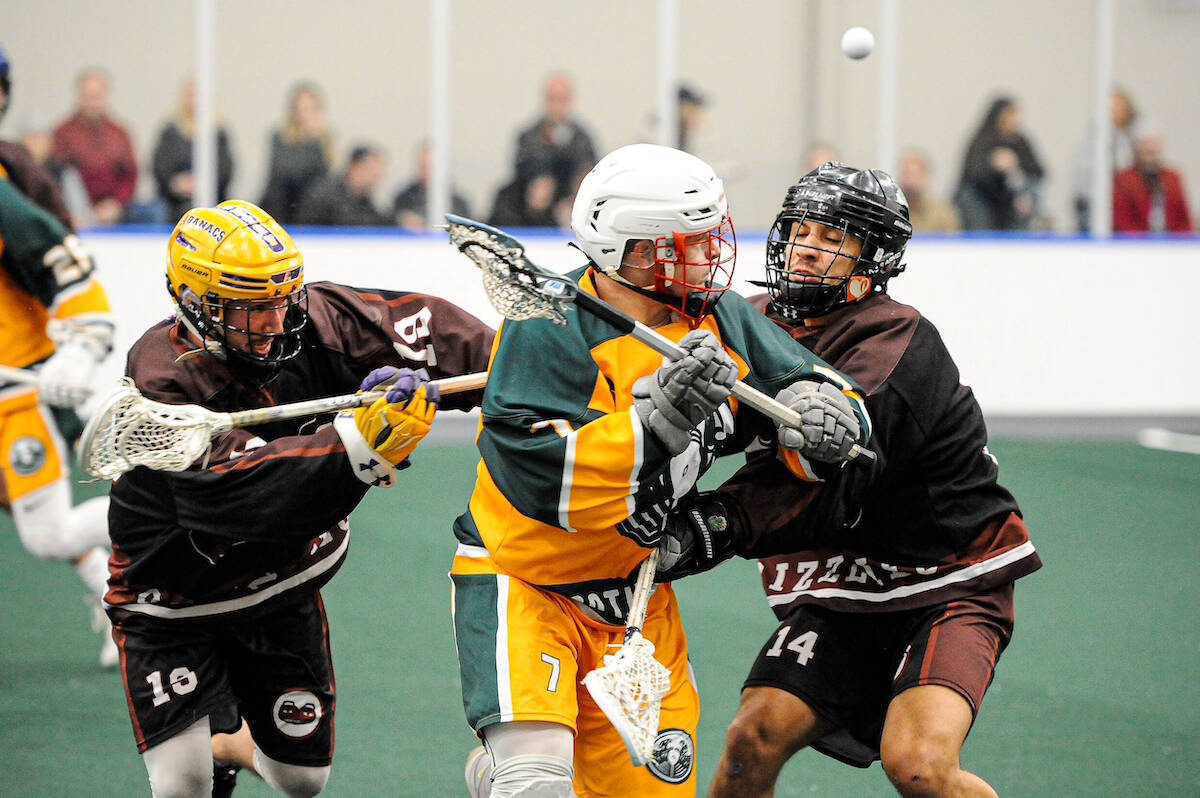 A third straight game and a third straight opponent held to single digits in goals equalled yet another victory for the Grizzlies, who improved to 3-0.

Grizzlies jumped out to a 5-1 lead early in the second quarter and held a multi-goal advantage the rest of the way, leading by seven late in the third quarter. The Shooting Eagles did manage to close the gap thanks to a 4-0 run, making the score a more respectable 13-9.

Goaltender Kyle Mooney made 40 saves on 49 shots as he played – and won – his third consecutive start. For the season, he has an 8.03 goals against average and an .830 save percentage.

“Obviously Mooney has been standing on his head, but defensively, we are sticking to our system and playing hard. We are communicating and everyone is going their job and it is paying off,” said Grizzlies coach Zack Porter.

With Mooney shutting the door, Pearson Willis paced the offence with four goals and six points. The team’s leading scorer – he has nine goals and 14 points – he credited the Grizzlies defence and transition for their efforts in taking the pressure off the offence having to post big numbers for the win.

“Our goalie has been amazing and we have some unbelievable D: they can transition, they can put the ball in the net and they can stop big plays when we need them to stop big plays,” he said.

PODCAST: What does the NFL future look like for Russell Wilson, Aaron Rodgers?