The Grizzlies prevailed in a first-place showdown while the Shooting Eagles won to pull into a second-place tie following week 6 action for the Arena Lacrosse League West Division action on Sunday, Jan. 8 at Langley Events Centre (LEC).

Facing a multi-goal deficit, a goaltending change proved to be the spark the Shooting Eagles needed.

A thrilling come-from-behind effort saw @Eagles_ALLWest erase a 7-1 deficit to earn the victory over @BlackFish_ALL pic.twitter.com/OZnRLKRkg8

Brody Harris entered the game and finished with 32 saves – including a breakaway save in the final minute with his team holding its first lead of the game – as the Shooting Eagles rallied for the 13-11 win over the Black Fish.

“Just stop the ball and you get the win,” Harris said of the game-deciding play, which was followed shortly afterwards by a Dylan McIntosh empty-netter.

“Just trying to keep your head in the game while sitting on the bench. You can go in at any time; just trying to stay focused and be ready,” said Harris, who was named first star of the game. “I just wanted to shut the door and give our guys a chance to get the offence going.”

“He came in and won the game for us,” said Shooting Eagles coach Adam Smith, who said the change from Thomas Ungaro to Harris – the teams’ No. 1 goalie — was less about performance and more about trying to light a fire under his own squad.

“At the very least, we needed that spark, and we obviously have complete faith in our starter, so we put him in there and he was the game changer.” 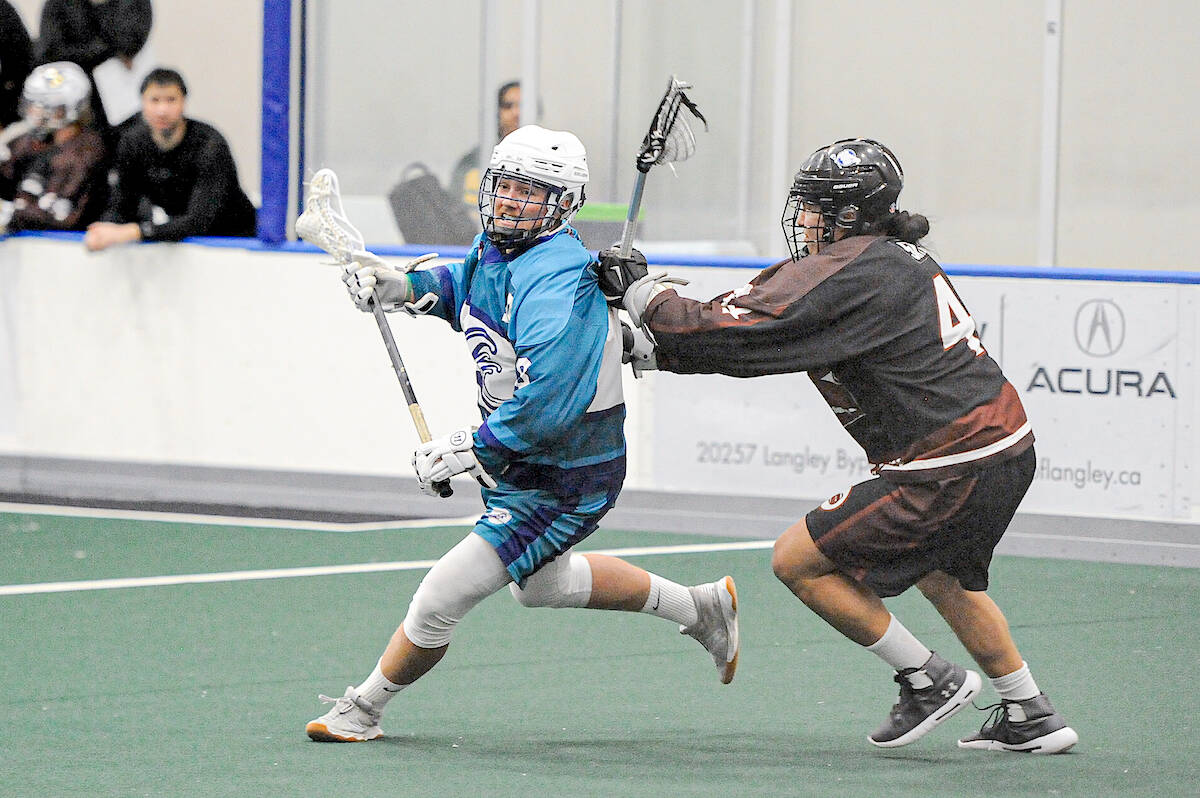 A huge second quarter provided the cushion and the defence came up tall in the end as the Grizzlies edged the Sea Spray 14-13 in a first-place showdown.

The Sea Spray twice led by a goal in the first quarter but after the Grizzlies tied the game at three after 15 minutes, the team erupted for six goals and never trailed again.

Leading the way offensively was the game’s first star, Sekawnee Baker, named first star of the game, who had a hat trick and five points. It marked the fourth time in six games Baker has recorded four or more points.

“He is reliable, and you know what you are going to get with him every night and he is consistent. He came up big again today,” said Grizzlies coach Zack Porter.

“We have a lot of guys on our back end that we rely on to shut down key players and that was obviously shown in the last couple of minutes today, so I really give it to our D guys,” Baker said. “Our defence really came up clutch. When we need something done, our defence really comes through and pulls together.”

The win also ends a two-game losing streak for the Grizzlies, who had won the first three games of the season.

Play resumes on Sunday, Jan. 15 at 1 p.m. when the Black Fish face the Grizzlies in the early game while the Sea Spray battle the Shooting Eagles at 4 p.m. Both games are at LEC.