The number 7.2 has been a talking point throughout the season for the Trinity Western Spartans.

It was the third and deciding game of last year’s BC Intercollegiate Hockey League championship series against the Victoria Vikes. And the Spartans had tied the game at two with 36 seconds to play.

But with everyone expecting overtime, the Vikes struck for the winner with 7.2 seconds remaining.

“That is what was left on the clock when (Victoria) scored the game winner so the number 7.2 has been brought up from the very moment we brought the guys together at training camp,” said Spartans hockey coach Barret Kropf.

“We didn’t go overboard with the message, but we had to be 7.2 seconds and we were. (And) it was a message they brought into all year long.”

Ten players graduated from that team so when the Spartans hit the ice for training camp back in the fall, Kropf didn’t know what to expect with virtually half of his squad departed.

The Spartans were hosting the Selkirk Saints this past weekend in the best-of-three championships. This was TWU’s fourth appearance in the championship series in the past five years while Selkirk won four consecutive titles from 2013 to 2016.

And TWU finally broke through, winning game one 5-1 on March 15 and then closing out the series in game two the next night, 4-1, with both games at the George Preston Recreation Centre.

It is the first hockey title for the Spartans in program history.

“It is pretty exciting for our players, and when I say players I include all the guys that have been a part of those teams that were so close in the past,” Kropf said.

“The program chipped away and worked hard to get to this point and I think the games this weekend were a culmination of five years of hard work and lots of dedication.”

With so many new bodies to blend into the line-up, Kropf admitted he wasn’t sure what to expect. And the first month of the regular season certainly didn’t indicate the team was on the verge of something great.

The Spartans went 4-2 through October and then split their first two games the next month before reeling off 11 consecutive victories through the end of January.

They finished the season with a program-best 21-3-0-1 record and won five of the six year-end league awards.

They followed that up with a 4-0 record in the post-season, avenging their loss to Victoria in last year’s championship before beating Selkirk in the finals.

Three of the four victories were by multiple goals and the Spartans outscored their foes a combined 21-6, trailing for a total of just 28:42 over the 240 post-season minutes.

“It probably wasn’t all that realistic, even that first semester, we were probably sitting around .500 after that first month,” Kropf said about his team’s chances of winning the title.

But the team’s leadership core spent a few days in Whistler with the coaching staff and together, the group talked about the commitment level necessary to succeed.

“I think it was a focus that the guys bought into and a commitment to doing things the right way,” Kropf said.

He also added that extra time in the weight room and fill room, gave the team that little extra it needed.

“I think losing in the finals (last year) … it taught us how to win,” Kropf said.

“We didn’t know how hard to push and this year, we knew we could push harder. That was a valuable lesson we had to learn.”

In Friday’s clinching victory, Jarrett Fontaine and Florian Niedermaier staked the Spartans to a 2-0 lead after one period.

The Saints’ Dallas Calvin cut the lead in half in the middle stanza but Fontaine and Evan Last rounded out the scoring in the third.

“There was just a lot of nervous energy in the building. We came out in the third and our guys just had another gear they were able to put it in to,” Kropf admitted.

Fontaine had a hand in all four goals, scoring twice and setting up the other two. He finished the post-season with 10 points in four games and on Tuesday was named the most valuable player for the playoffs.

The 10 points were actually tied with Last for the lead while Jordan Rendle was right behind with nine points.

The trio, along with their teammates Dustin Deugau and Silas Matthys, were named to the BCIHL playoff all-star team. 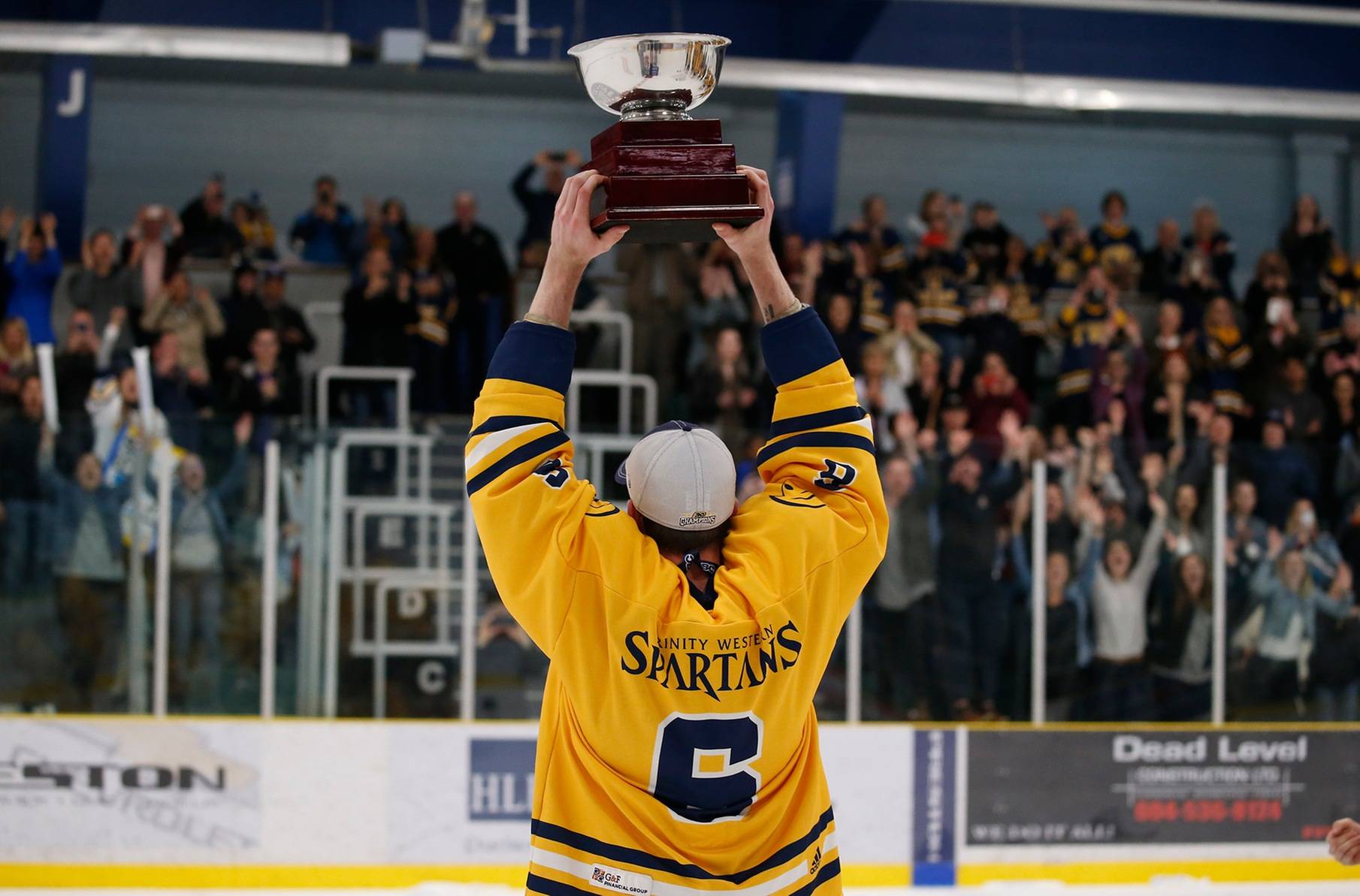