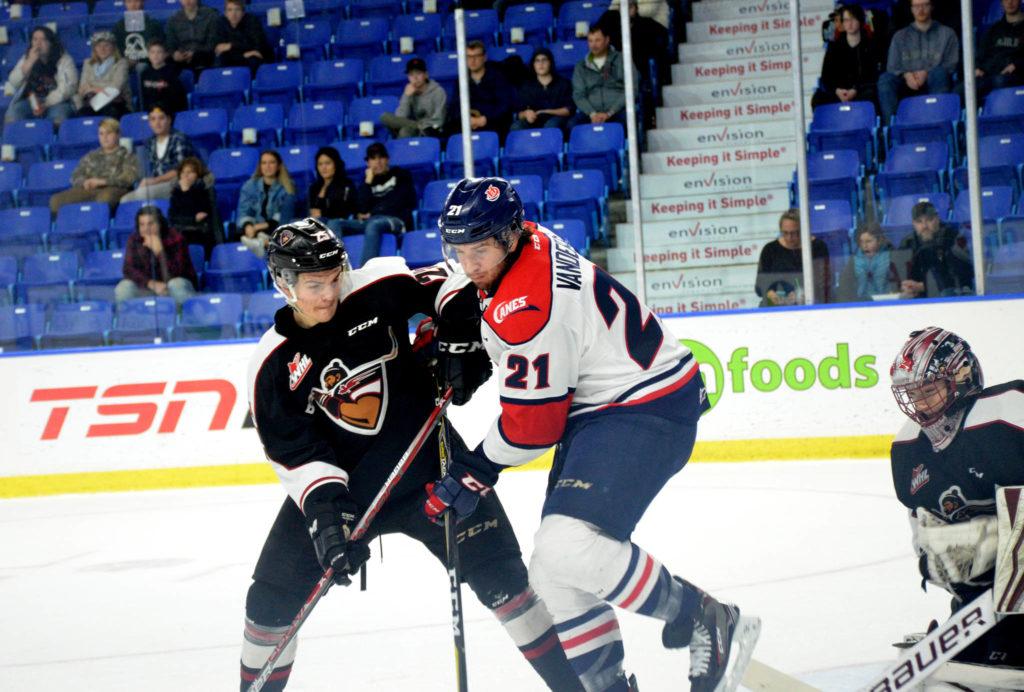 The Vancouver Giants delivered a dud.

In search of a fifth straight home-ice victory — and playing an opponent which had lost eight consecutive games before snapping the slump the night before in Victoria — the Giants could not muster much of an offensive attack.

The end result was a 5-2 loss to the visiting Lethbridge Hurricanes on Wednesday night at the Langley Events Centre in Western Hockey League action. The loss dropped the Giants back to .500 on the season at 10-10-2-2 while the Hurricanes improved to 9-12-1-0.

McKee said the coaching staff had stressed the importance of getting through the neutral zone but that message seemed to have fallen on deaf ears.

“Our players didn’t put the emphasis on that they needed to and they turned pucks over and (Lethbridge) attacked,” he said.

Tyler Benson and Ty Ronning had the Vancouver goals, which came in the first and third periods, respectively.

Ronning’s goal — his 24th of the season — extended his goal-scoring streak to 11 games, the longest current streak in the WHL.

The Hurricanes opened the scoring just past the midway point of the first period after winning a puck battle behind the net, Dylan Cozens centred the puck to Giorgio Estephan, whose quick shot beat David Tendeck.

Benson tied the score less than four minutes later on a delayed penalty, taking the pass from Bowen Byram and walking around a Hurricanes defender and snapping the puck past Reece Klassen.

But with 28 seconds to go in the period, Ryan Bowen tucked the puck just under the cross bar — the goal had to be confirmed by video review — to give the visitors a 2-1 lead heading into intermission.

Ryan Vandervlis made it 3-1 early in the second and Jordy Bellerive — a Pittsburgh Penguins draft pick from June — made it a three-goal advantage.

Ronning scored with about 11 minutes to go and the Giants generated some chances, but no more goals.

Taylor Ross iced the game into the empty net with 66 seconds to play.

Vancouver only dressed 17 skaters as Brayden Watts was out with the flu and Owen Hardy is injured.

Already without top-four defenceman Matt Barberis (day-to-day), the Giants lost Darian Skeoch after a fighting major when both he and Tanner Nagel were given game misconducts late in the first period after the officials determined it was a staged fight, an assessment McKee disagreed with.

“You can see how important Matt Barberis and Darian Skeoch are to our back. We weren’t the same without those two back there,” the coach said.

“Those are big minute guys for us. You would like to think and hope that other guys would step up for us and play some minutes, but tonight it didn’t work out that way.”

“Injuries happen and you just have to find ways to win games and tonight we let one slip away, I shouldn’t even say slip away, we didn’t earn any points tonight and they did,” McKee said.

The Giants are back in action on Friday night as they host the Kelowna Rockets at the LEC. Game time is 7:30 p.m. 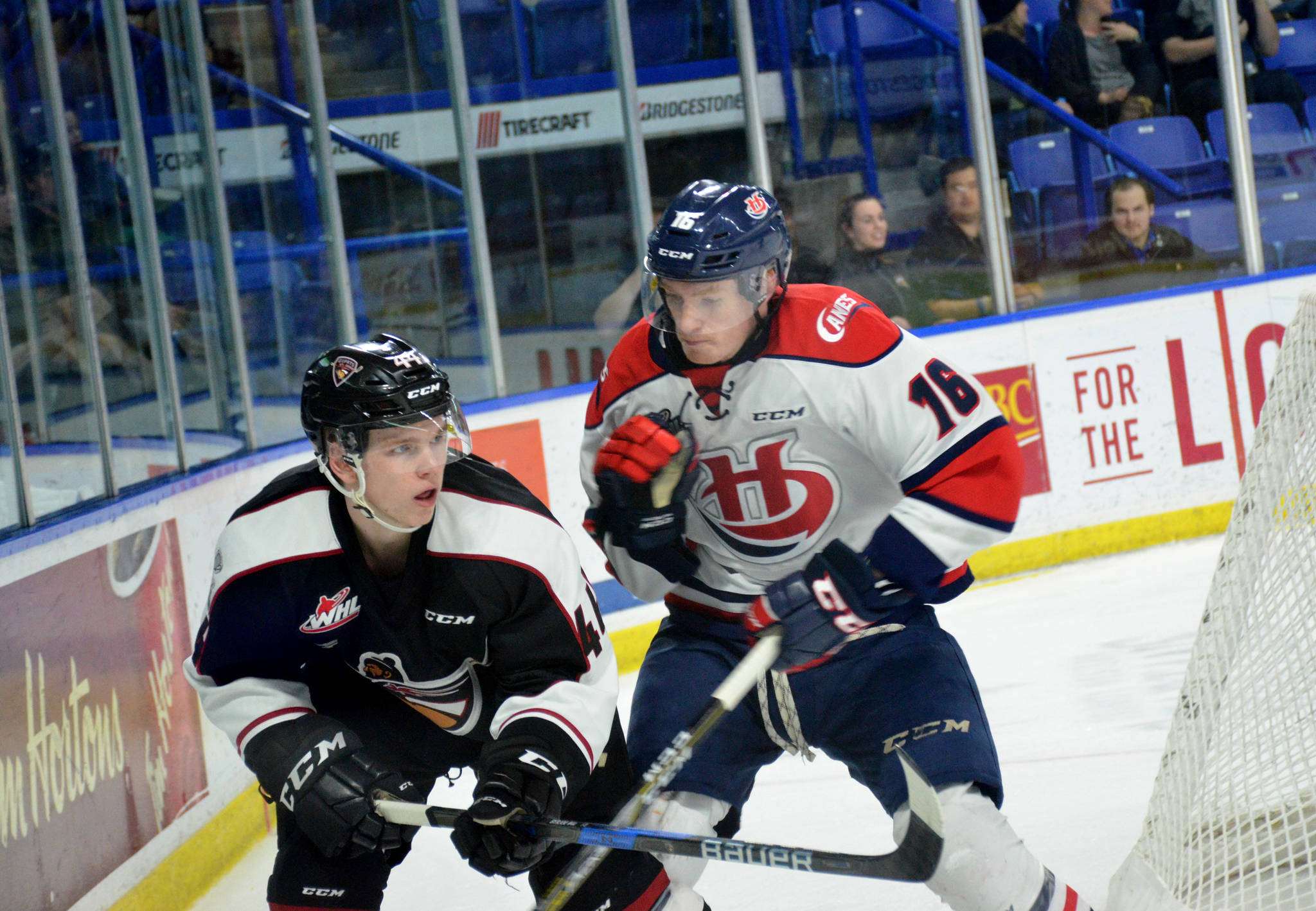 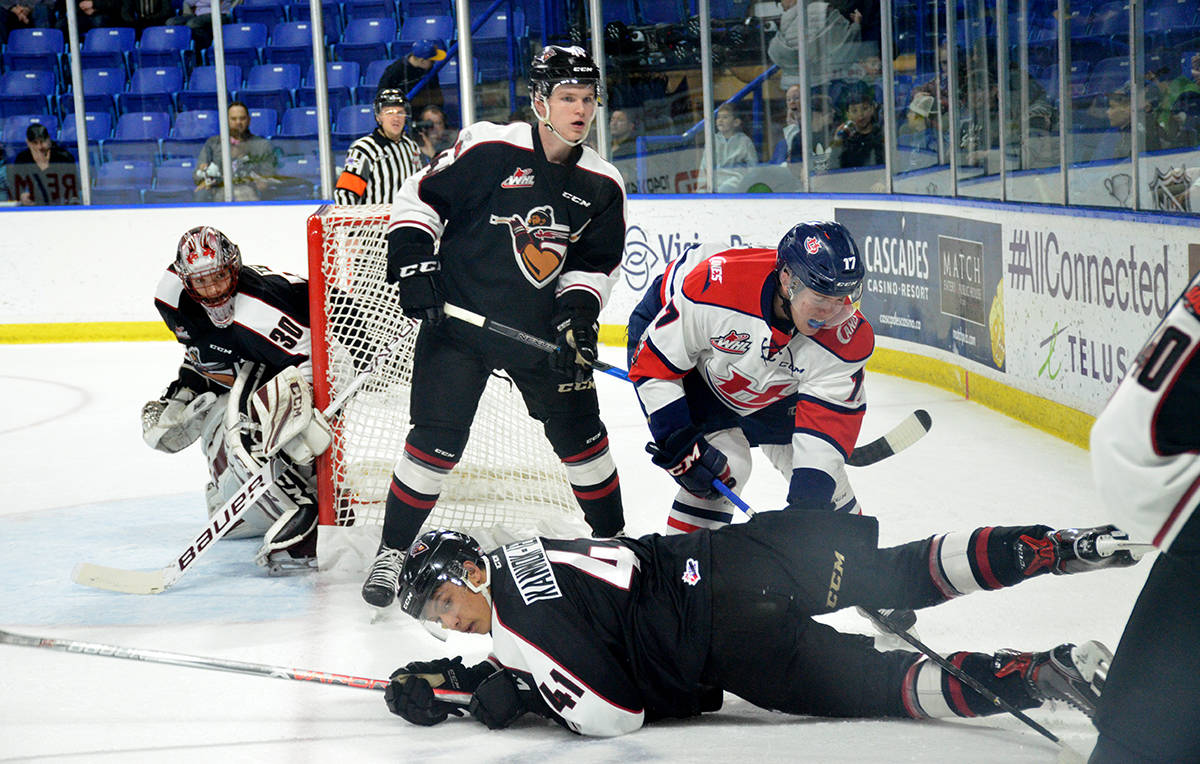 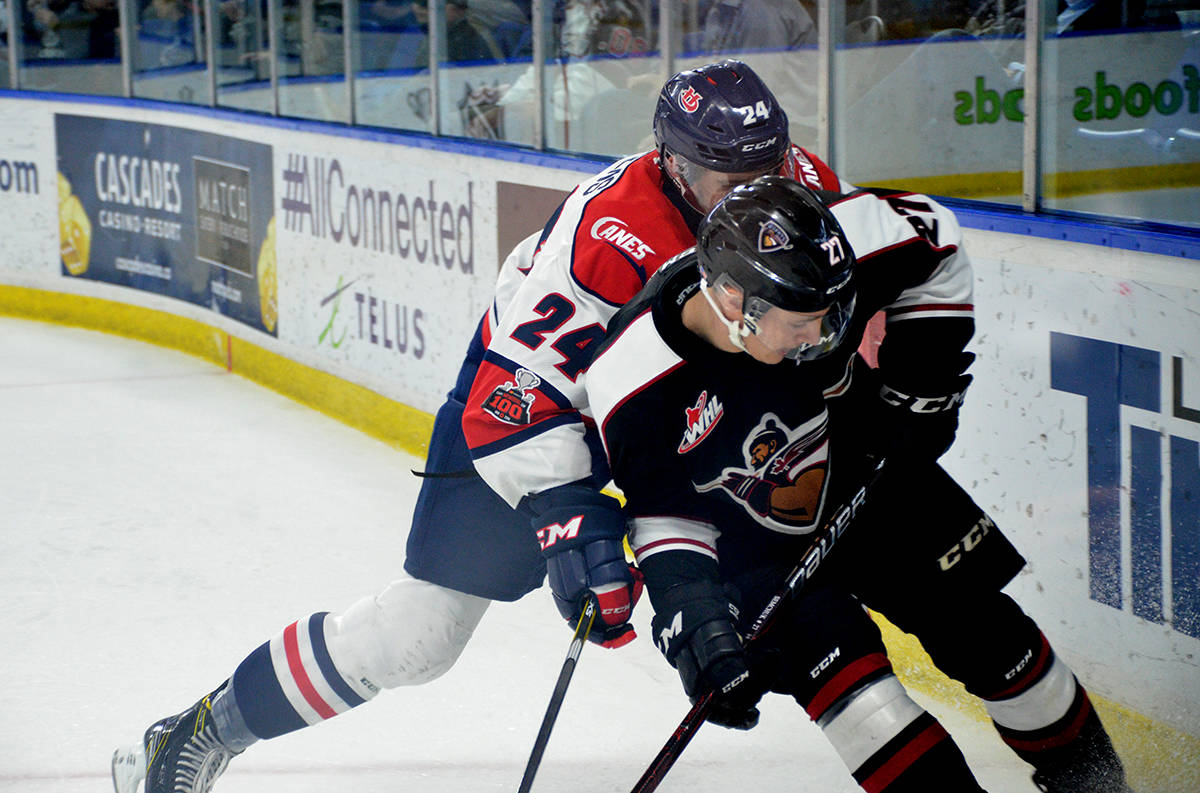 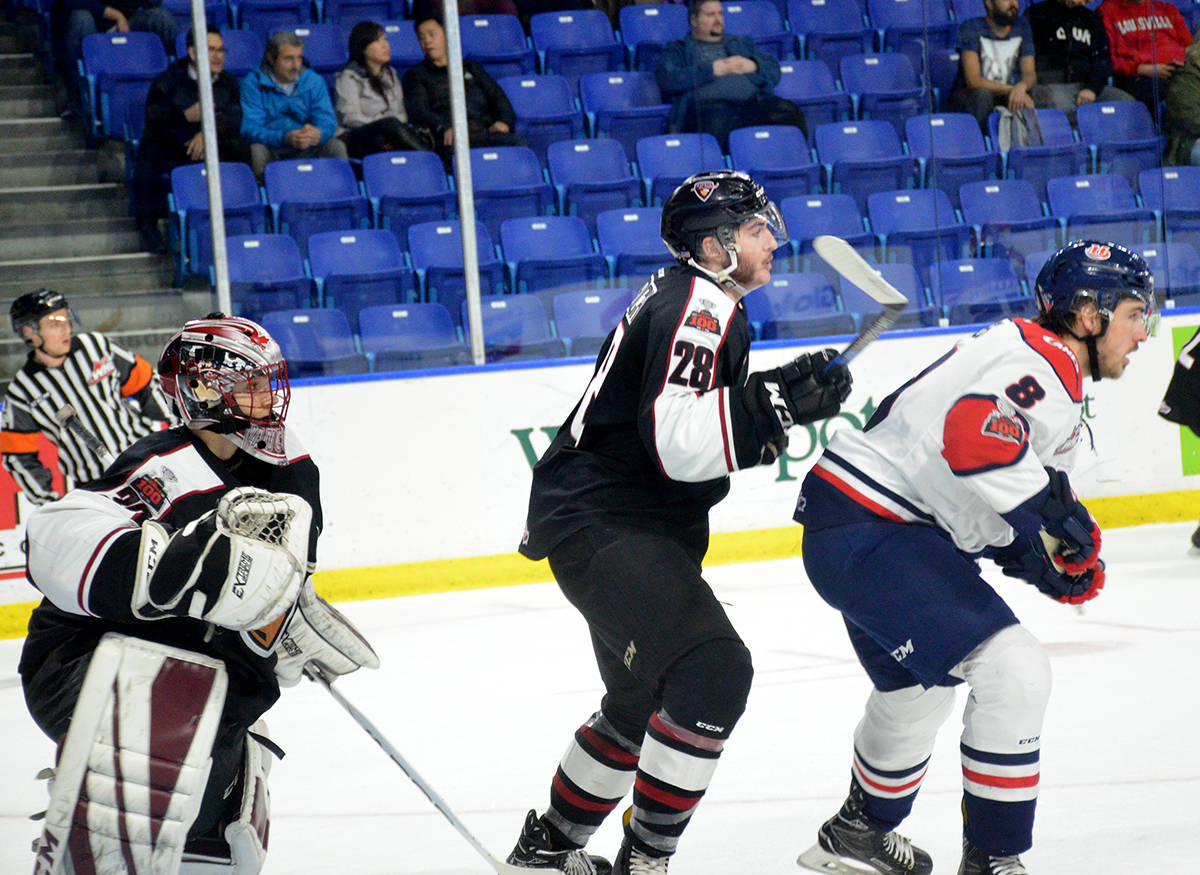 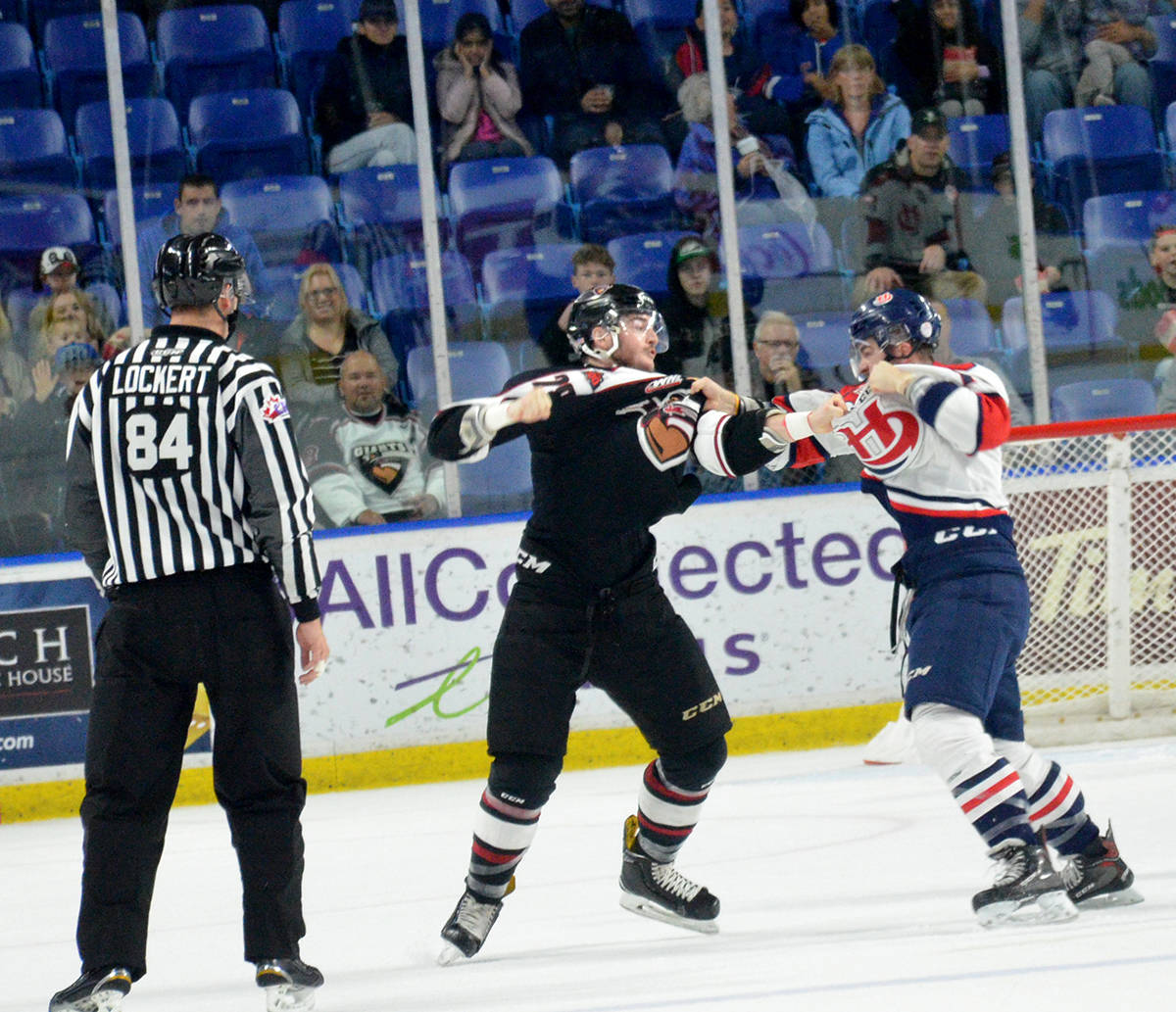 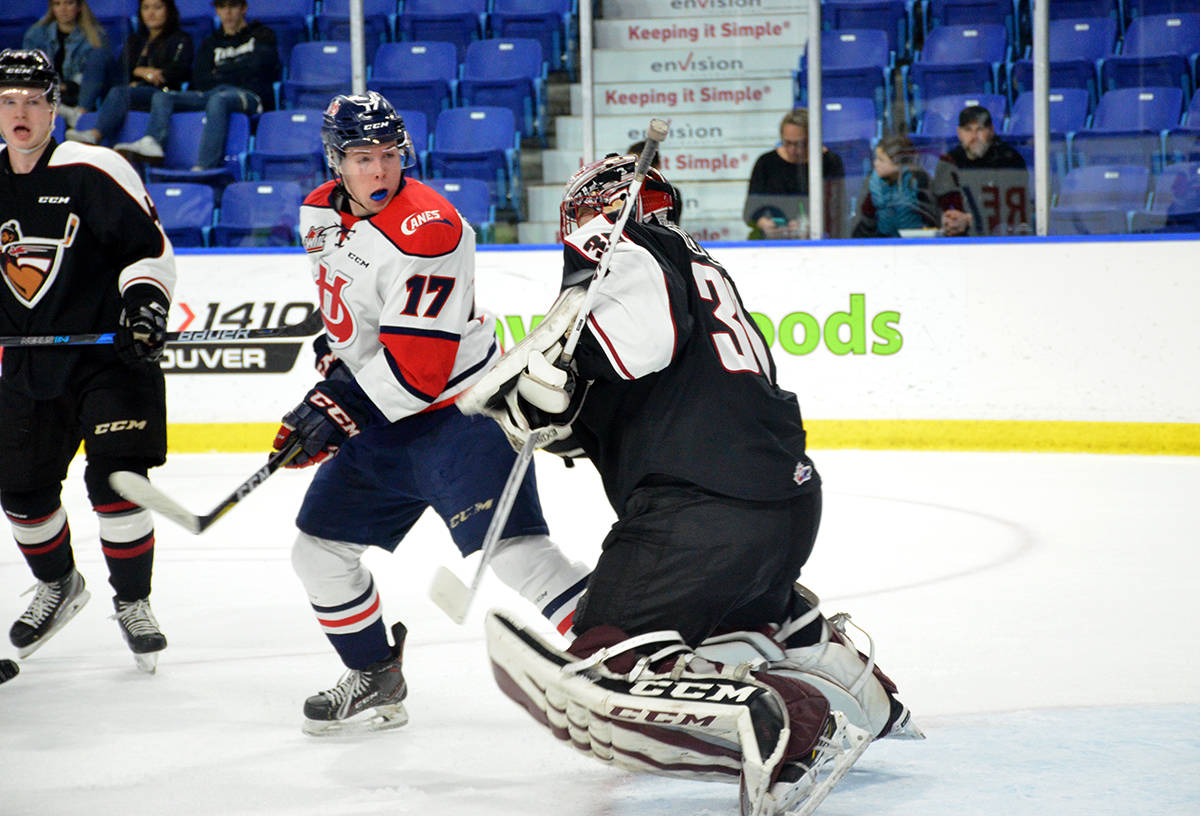 Vancouver Giants David Tendeck makes the save against the Lethbridge Hurricanes during WHL action at the Langley Events Centre on Nov. 22. Gary Ahuja Langley Times