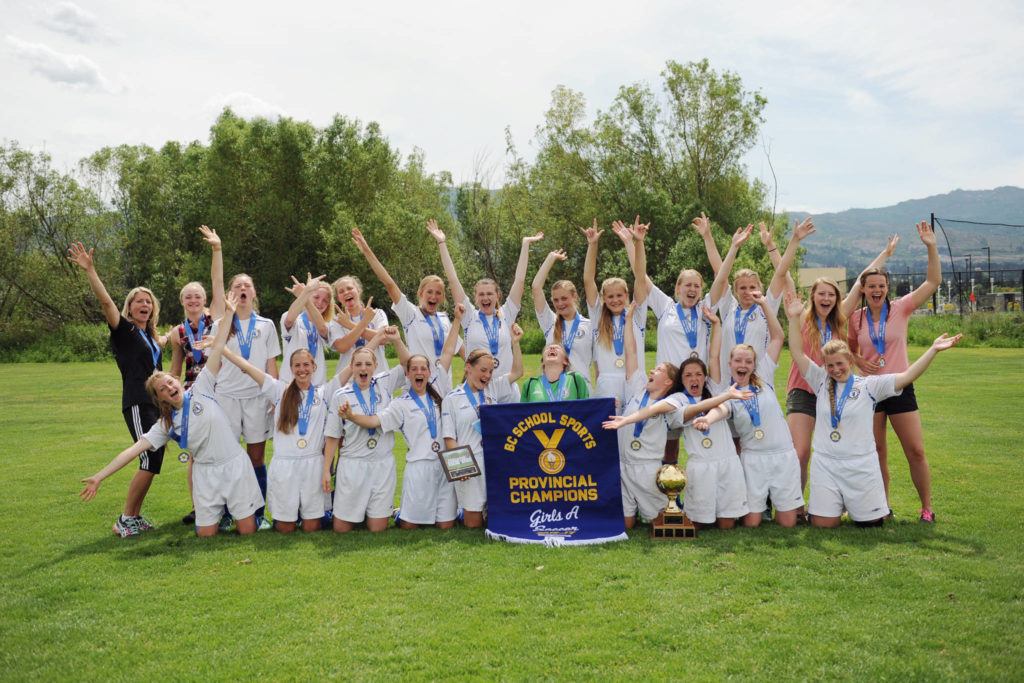 The Credo Christian Kodiaks are provincial champions after defeating Langley Christian in the gold-medal game at the B.C. senior girls Single A soccer championships in Kelowna. Wenda Sikma photo

For the first time in school history, the Credo Christian Kodiaks have brought home a soccer provincial championship banner.

The Kodiaks senior girls soccer team defeated their local rivals, the Langley Christian Lightning, 1-0 in the gold-medal game of the B.C. Single A championship final.

The game was played Saturday at Kelowna’s Immaculata School.

Stam took over the team this season but credited long-time coach Derek Hoogerdijk for the program he built.

In his final season as coach last year, the team captured the program’s first Fraser Valley banner in senior girls soccer and had a school-best third-place finish at the 2016 provincial championships.

“I think that inspired these girls,” Stam said.

“They came in felt they were in the running for the championship.”

She also said the school’s provincial banner in basketball back in March — with a half dozen or so players from that squad — helped give the team an added confidence boost.

“I think the girls now feel ‘we don’t have to come in for a third place, we are coming in first and chasing that,’” Stam said.

The lone goal came early in the second half after Langley Christian was called for a hand-ball in the box.

Stam said there was no doubt Caitlin Sikma would take the kick as she is the team’s go-to player in that situation.

“She turned and gave me the thumbs up, she is very confident in shooting,” Stam said.

“It was not her best penalty kick ever but it did the trick.”

The Lightning pushed for the equalizer but could not break through.

A big key to the game was the play of the Kodiaks’ Nicole Spoor, who was tasked with keeping an eye on the Lightning’s Abby Berg, Langley Christian’s dynamic scorer up front.

“(Nicole) shadowed who we thought was their biggest scoring threat and just did fabulous,” Stam said. “And (LCS) had a strong middle as well so our middles did a great job.”

“We played well,” said Lightning coach Anthony Togeretz. “Credo had a strong defence and it was hard to get through but we were able to break through a few times but weren’t able to find the back of the net.

“We also played defensively and limited most of the possession to the midfield.”

Both teams won their pools with Langley Christian defeating the host Immaculata squad 5-3 in one semifinal, while Credo Christian edged Whistler 1-0 in the other, setting up a rematch of the Fraser Valley final two weeks ago.

Leading up to the gold-medal game, both the Kodiaks and the Lightning had little problem finding the back of the net.

Credo Christian found the back of the net a dozen teams in their four games while Langley Christian was even more proficient, striking for 15 goals.

The Kodiaks only surrendered one goal over the entire tournament while the Lightning surrendered seven (three in pool play and then four more in the medal round).

“We are proud of our season and how we played,” Togeretz said.

“We are happy with the silver now, but our goal was to do the best we could and we felt we had a chance to win, so that was very disappointing.”

The provincial final was the fourth meeting between the two teams with Credo Christian having won the last three.

“They were all very close games but I think we felt confident,” Stam said. “We knew it would be tough, it would be close, but we felt very confident going in and the thing is, we know them (Langley Christian) very well.”

“(And) I thought it was pretty special to face them — it was very cool that both of us had gotten through.”

PHOTOS: Langley RCMP called to crash after car turns in front of Jeep

The incident happened on Tuesday and resulted in minor injuries

Police learned the she didn’t steal Penelope the cat, and was actually taking her cat to the vet