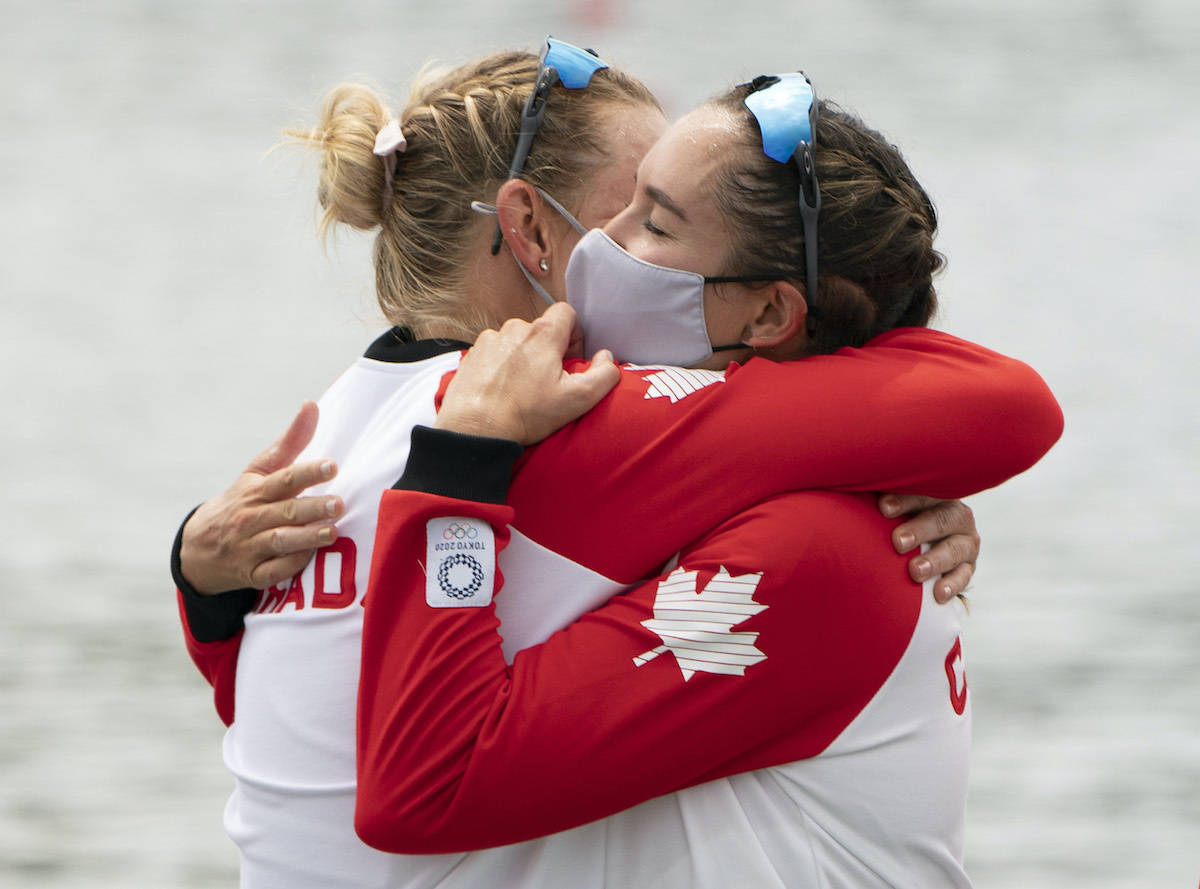 Canada’s Christine Roper and Andrea Proske hug as they wait on the podium after winning the gold medal in women’s eight rowing competition at the Tokyo Olympics, Friday, July 30, 2021 in Tokyo, Japan. (THE CANADIAN PRESS/Adrian Wyld)

Langley’s Andrea Proske marked Team Canada’s gold medal Olympic victory in women’s eight rowing by posting a photo to social media of a team huddle soon after they were crowned world champions with the simple but momentous caption.

Proske, 35, made her Olympic debut at the 2020 Tokyo games alongside local returning rower 31-year-old Lisa Roman.

“It took a village to get here, thinking of all of you who believed in me today.” Proske continued on social media.

The Canadian crew held off New Zealand in the home stretch of the Olympic race to win gold by 0.91 of second over the challengers, the committee reported, finishing in 5:59.13, while China was awarded the bronze medal.

The Langley rowers learned they were named to the Canadian Olympic team on June 15.

Roman, who grew up in Murrayville, was a member of the rowing crew at the Rio Games in 2016 who finished fifth.

A D.W. Poppy Secondary graduate (2007), Roman developed a passion for the sport after attending a learn-to-row session at the University of the Fraser Valley.

Prior to that, she had been a competitive figure skater.

Meanwhile, Proske discovered the sport through the Row to Podium program at the age of 27, a Canadian identification and development program for rowing designed for athletes with no experience in the sport, a 2016 Langley Advance Times profile described.

At the time, Proske was working as a hotel manager.

This is the fifth Olympic medal Canada has won in this event, according to the Olympic committee, all of them in the last eight Games, starting with the gold at Barcelona 1992, followed by silver at Atlanta 1996, bronze at Sydney 2000 and then a silver at London 2012.

From wire to wire
To extending a legacy
To glory ✨

Rugby Canada condemns criticism of 7s team, with some coming from within