The announcement was made Tuesday, June 15.

Both are on the women’s eight team, among 29 athletes listed by Rowing Canada Aviron and the Canadian Olympic Committee as the team nominated to compete at the Tokyo 2020 Olympic Games.

Reaching the Olympics, “the pinnacle, the highest level of sporting,” as they both described it, is the goal they have been pursuing for their entire athletic careers, including being isolated in a COVID bubble at the training centre in Victoria, away from family and friends.

Roman, 31, who grew up in Murrayville, is a returning Olympian, part of the team who finished fifth in the eight at the Rio games in 2016.

“I’m glad that the past five years have turned out the way I had hoped. It’s a special moment when your hard work and dedication to the sport pays off and you’re in the position to represent Canada on the world stage.”

She described selection as a “very long, thorough process.”

“We are constantly training or seat racing against our teammates, so as the months unfold you get a pretty good idea of where you stand on the team – but until you are literally sitting on the starting line of the Games you can never feel secure in what seat you’ll be in.”

A D.W. Poppy grad (2007), Roman got into the sport after attending a learn-to-row session at the University of the Fraser Valley.

Prior to that, she had been a competitive figure skater.

She quickly took to rowing, earning MVP honours in her second year with UFV and a scholarship to Washington State University.

Roman made the national U23 team and won gold with the eight at the 2011 U23 World Championships.

She has stood on five world championship podiums with the eight, beginning with a bronze medal in 2013, followed by silver in 2014, and then another bronze in 2015.

At the 2019 World Rowing Championships, Roman and the eight finished fourth, qualifying the boat for Tokyo 2020.

In her Rowing Canada profile, Roman said what she loves about rowing is “working hard to see gains.”

Olympics bound 🇨🇦
So excited to be announced as part of the powerhouse of women in the Coxed Women's Eight!
It takes a village to realize Olympic dreams, but the biggest thank you goes to my family ❤️ https://t.co/UQlr9YNn0Z pic.twitter.com/YQVuA6gfSO

Proske, 34, whose family lives in Willoughby was excited to be announced as part of the “powerhouse of women in the Coxed Women’s Eight.”

“When I was finally internally nominated to the women’s eight, I Zoomed my family and just about went deaf from the cheering,” Poske recalled.

“Seeing my family’s reaction and tears made me realize how special this moment was. My mom said my father couldn’t sleep that night from excitement – she, on the other hand had the best night in ages, finally relieved from years of sleepless nights worrying if I would achieve my dreams.”

“Wow, I’m going to be an Olympian,” she thought.

A Langley Advance Times profile in 2016 described how Proske discovered the Row to Podium program at 27, a Canadian identification and development program for rowing designed for athletes with no experience in the sport.

At the time, she was working as a hotel manager.

“I called my father, expecting him to advise against this sudden switch in careers but he and my mother were 100 per cent behind me,”Proske recalled.

“I remember him saying, you never want to wonder what if.”

She went on to become a national champion, and a top-ranked international competitor.

She first represented Canada on the senior international circuit in the double sculls with Gabrielle Smith in 2018.

In their World Cup debut as a duo, they won silver in Lucerne.

They won another World Cup medal in 2019, this time a bronze in Rotterdam. They capped the season with a fourth-place finish in the double sculls at the world championships, qualifying the boat for Canada for Tokyo 2020.

On her Rowing Canada online profile, Proske said what she loves about rowing is that it “builds and reveals character. There’s nowhere to hide in a 2k.”

With 10 boats at the start line in Tokyo, it will be Canada’s largest Olympic rowing team since the Atlanta 1996 Olympic Games, when Canada also sent 10 crews and came home with six medals.

Their families and friends will have to cheer on Proske and Roman from Canada, as no foreign spectators will be permitted in Tokyo. 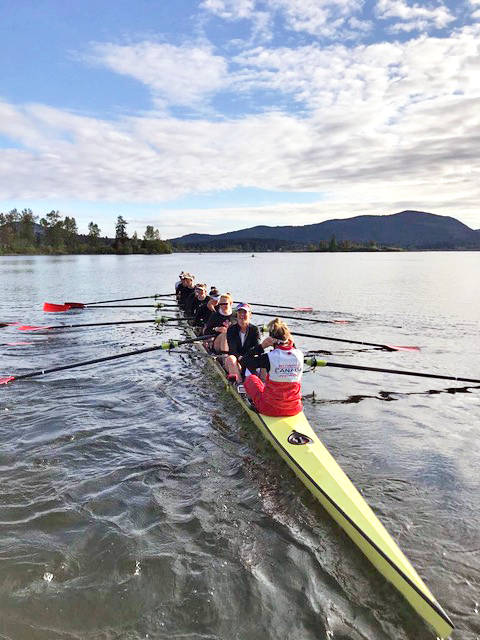