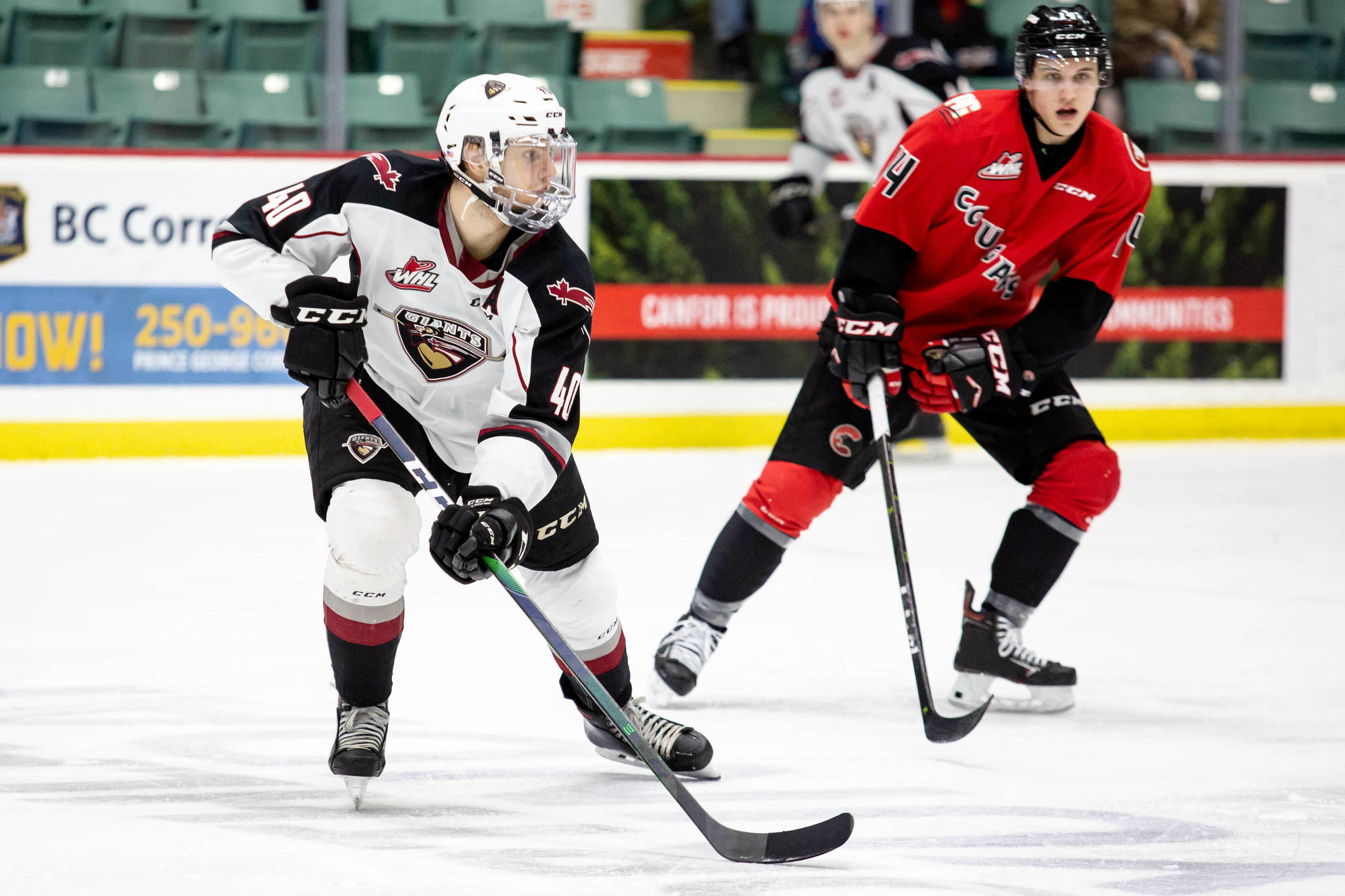 Giants player Milos Roman looks for an opening against the Prince George Cougars on Saturday, March 7th, during what would prove to be the last game for an undetermined period of time for the Langley-based team, now on hiatus because of COVID-19 concerns. (Brett Cullen/special to Langley Advance Times)

One day before the WHL Vancouver Giants were to play a home game at the Langley Events Centre (LEC) against Seattle, the 22-team league put the season on hold to help fight the COVID-19 virus.

Giants president and owner Ron Toigo called it an “unprecedented situation,” adding the health and safety of fans and the team were paramount.

“We will continue to closely monitor this situation while working closely with local health authorities and the Langley Events Centre,” Toigo said.

Many of the players are being sent home, Giants head coach Michael Dyck said, though travel restrictions will prevent some imports from travelling to Europe.

“Its frustrating, but at the same time it’s way bigger than hockey,” Dyck remarked.

“This is uncharted territory.”

It was just one of many cancellations as various Langley-based sports groups responded to the call by authorities to eliminate large gatherings in order to slow the spread of the virus.

READ ALSO: COVID-19: What’s open and closed in B.C. as a result of the novel coronavirus

Aldergrove Kodiaks bid for the Pacific Junior Hockey League championship became a victim of the virus, with the league announcing cancellation of the 2020 PJHL Finals involving the Kodiaks and the North Vancouver Wolf Pack.

“There will be no league champion named for the 2019-20 season,” the league statement said.

This decision also affects the 2020 Cyclone Taylor Cup, which was to be held in 100 Mile House in mid-April.

A group of 17 Langley Rugby U15 players were about to fly to the UK for a series of games against British teams when their trip was cancelled.

Langley Rugby chair Brian Anderson said the decision was made the night before the team and three chaperones were scheduled to fly out on Friday.

“It was the parents call, and they were concerned that if the girls got over there, they might not be able to come back [due to travel restrictions],” Anderson observed.

“In light of what’s been happening, that was a good call.”

The team had been fundraising for months to go.

Langley Rugby had planned to hold a 250-player jamboree on Sunday, March 15th, but had to cancel it after Rugby Canada issued an order to all team to stop playing.

BC Rugby is also prohibiting any club or associate member from taking part in rugby activities in Washington State while the state has event restrictions in place.

Team members are being advised to clean and disinfect equipment that is frequently touched, such as tackle bags.

Langley Curling Centre announced it was closing down for the 2020 season and shutting down leagues, practice ice, bonspiels, programs and events.

An online statement said the decision was “a difficult one but it is in the best interest of the members of our club and our community. We can not risk even one member contracting this virus for curling. We are following the lead of almost all associations such as Curl BC, Curl Canada, BC Minor Hockey, FV Ringette, Valley Ball Hockey, and so on.”

A few days after Langley runner Sarah Inglis learned her long-held dream of competing for her native Scotland would have to be put on hold with postponement of the World Half-Marathon Championships in Gdynia, Poland because of the outbreak, there was another virus-related setback.

Inglis learned that she would not be competing in the BMO St Patrick’s Day 5K road race in Vancouver on Saturday, March 14th, where she set a Canadian record in 2019 of 15 minutes and 29 seconds, because the event was called off due to virus concerns.

With all major races cancelled until May, Inglis said she was “training as normal and waiting to see what will happen for track season.”

Langley Mustangs and Track Rascals announced they were suspending registration.

Athletes will be placed on a waitlist, the clubs said.

Meanwhile, Langley Riders Society directors were preparing to meet to discuss the impact of the virus and whether events at their 208 Street arena will have to be canceled.

Richot said the big question is whether to pull the plug on the annual Little Britches Rodeo, which is set for for June.

That decision will have to be made fairly soon, Richot advised, because the all-volunteer LRS needs to get started organizing the event well in advance.

Word of rodeo cancellations is reaching the Langley Riders Drill Team, said Megan Johns, a director of the team, but so far, none they were scheduled to perform at.

“Not yet,” Johns commented.

Langley Blaze had to cancel their annual visit to play against Major League Baseball (MLB) teams at their training camps this month.

Team general manager Doug Mathieson said that was because all MLB facilities have been shut down.

READ ALSO: On track for fitness

As well, large events are being cancelled, the LEC said in an online statement.

“For the safety of all, the LEC has supported the provincial directive to restrict gathering to a maximum of 250 people, and any such large activities that were planned fore the coming weeks have been postponed.”

“Currently any new request for future events or rentals are on pause, and specifically in new bookings are being made during the period up until March 29. Each activity currently booked during this same period is being reviewed individually and may be asked to be postponed to assist with the distancing of individuals and to play or part to slow the spread of this virus in BC.”

Langley Rams football team is supposed to begin training camp on May 1, but head coach Howie Zaron suspects it will be cancelled.

A decision on the regular season doesn’t have to be made right away, Zaron explained.