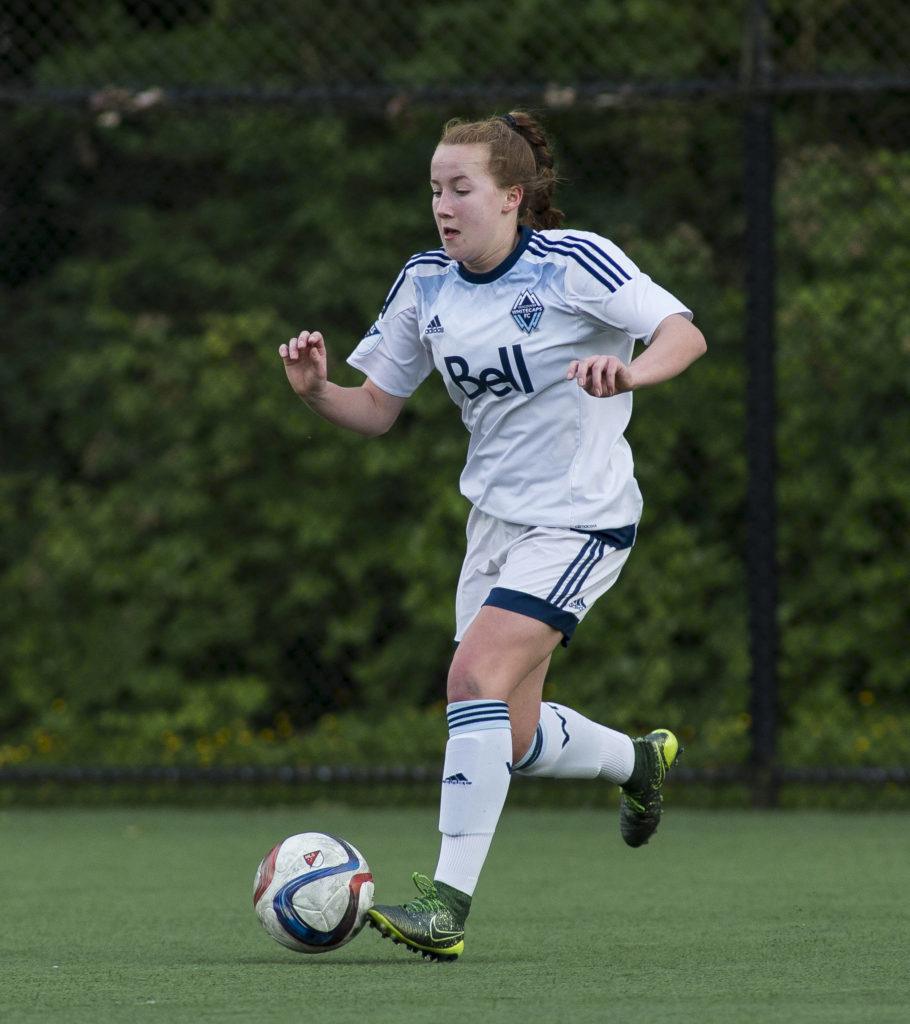 Soccer continues to take Langley’s Reese Moffatt places as the next stop in her soccer adventures will be Baton Rouge as part of the LSU Tigers. Bob Frid Vancouver Whtiecaps FC photo

Reese Moffatt’s soccer odyssey is taking her from Langley to Louisiana.

And if the talented teenager continues ascending in her sport, it just may end up with her wearing the red and white for Canada in a few years time.

Moffatt, who turns 18 in July, is off to Louisiana State University (LSU) later this summer, after signing her national letter of intent to join the Tigers women’s soccer program back in February.

She verbally committed to the program two years ago, when she was in Grade 10.

“Ever since I was a little girl, that has always been my dream,” she explained about landing a full-ride scholarship to a Division 1 program.

“And then hopefully make it to the national team.”

Emma Humphries, Moffatt’s coach the past few years as part of the Girls Elite BC REX program, said the teen has shown a propensity to take what she is taught and translate that into immediate success on the pitch.

“I have seen her grow over the last three and a half years immensely as a person and as a footballer,” Humphries explained.

“She has shown an ability to take on information and get better from it.”

Like many younger siblings, Moffatt was following an elder sibling into their activity, in this case dance.

But the six-year-old tried it and knew it wasn’t the right fit.

“I tried it but it really wasn’t for me,” Moffatt said with a laugh.

Seeing her athleticism on the playground, a family friend recommended soccer for the youngster, and Moffatt excelled not on the pitch, but also on the ball diamond, having taken up fastball as well.

Eventually, the time came to focus on one sport, with Moffatt hanging up her bat and glove to focus exclusively on soccer.

It has been a wise decision.

Moffatt was among 36 players chosen for the Whitecaps FC Girls Elite BC Super REX (Regional Excel Centre) program, a regional training centre done in partnership between BC Soccer and Canada Soccer for top female soccer prospects from across Canada to attend school, train and play together in Burnaby.

It has meant switching high schools — Moffatt was at Walnut Grove but now attends Burnaby Central — and a daily commute from Langley to Burnaby.

Moffatt plays centre-back and is a key cog for her team’s defence.

“She is an exceptional defender, always willing to put her body on the line,” Humphries explained.

“She is technically strong (and) with how we play, she starts a lot of our attacks through the back-line.”

But before she departs for LSU and the Deep South, Moffatt will turn her attention to the newly-formed TSS FC Rovers, a team in the Women’s Premier Soccer League. The WPSL is an independent North American league focused on the development of highly competitive premier women’s soccer leagues.

The Rovers play an eight-game schedule in the West Region’s Northwest Conference against squads from Washington state and Oregon — Seattle Sounders Women, ISC Gunners FC, PacNW-OSA FC, Westside Timbers, FCM Portland, Eugene Timbers FC Azul and THUSC Diamonds — and the Diamonds will be the Rovers first opponent when they meet later this month (May 26) at Mercer Stadium in New Westminster.

Moffatt is one of eight players from the Whitecaps academy program on the Rovers’ roster, which features players from Canada’s national team program.

The decision to have teenagers playing with and going against women was strategic, Humphries explained, as this should prepare them more for the challenges which await them at the university soccer level.

“I think this will be a good challenge and help us get ready for university (soccer),” Moffatt agreed.

And as for her long term goals beyond university, Moffatt has her eyes on playing for the national team program, as well as embarking on a professional career, either in the United States or overseas.