Next stop: the WLA Finals.

The Langley Thunder punched their ticket to the Western Lacrosse Association championship series with a 15-10 victory in game six on Sunday, Aug. 14, against the Victoria Shamrocks, winning the series four games to two.

The game was played at Victoria’s Q Centre.

The teams traded goals in a back-and-forth first period which ended up tied at five before Langley pulled ahead 8-7 with a period to play. It remained a one-goal game at 10-9 early in the third but the Thunder scored five of the final six goals to seal the game and the series.

Frank Scigliano earned the first star with a 42 save-performance as the Thunder were outshot 52-36, while teammate Chase Scanlan was second star following a five-goal, night-point effort. 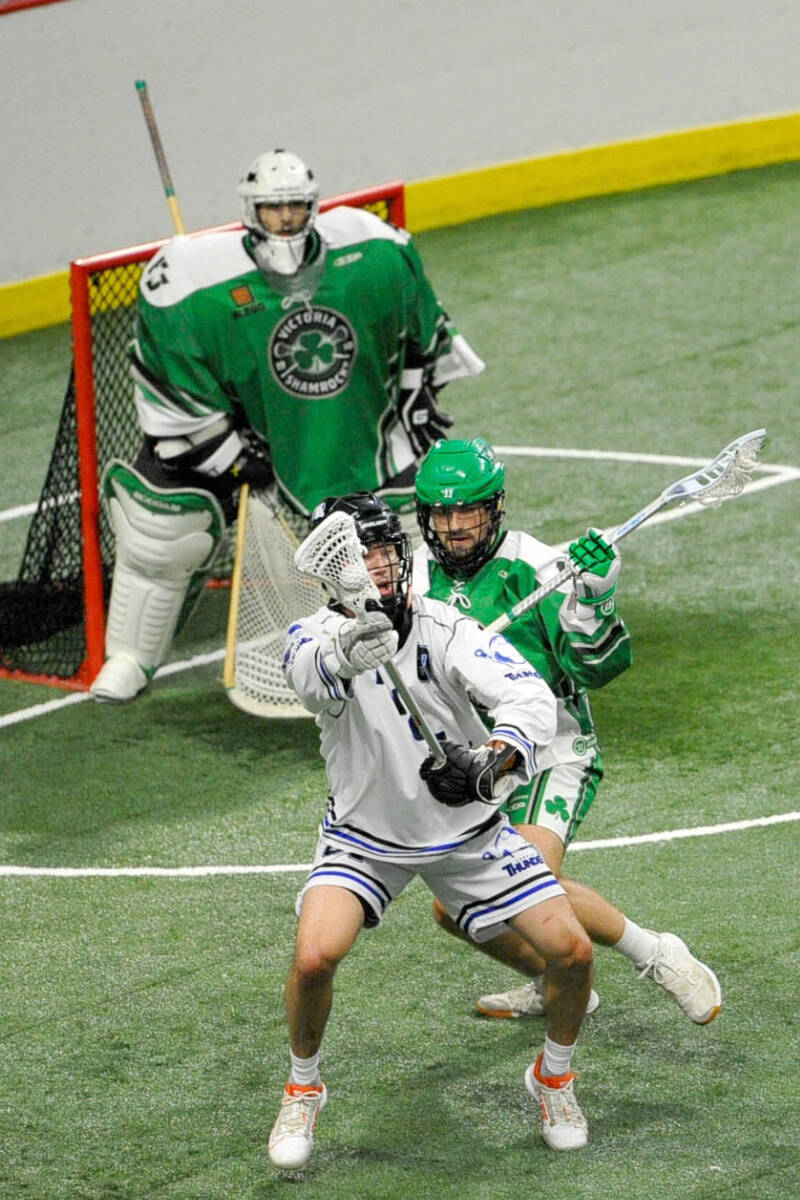 Chase Scanlan, seen here during an earlier game in the semifinal series, had a five-goal, nine-point game on Sunday, Aug. 14, that saw Langley Thunder down Victoria Shamrocks 15-10 and win a berth to the WLA championship series. (Gary Ahuja, Langley Events Centre)

Dane Dobbie also finished with a pair of goals and nine points and Connor Robinson and Curtis Dickson each scored two goals and had four helpers.

Dylan Kinnear (two goals), Noah Armitage (one goal, one assist) and Keegan Bell (one goal) rounded out the Langley scoring.

The Shamrocks entered the series with the league’s most potent offences, as they were the only team to score more than 200 goals, finishing with 229 for an average of 12.7, which was two goals more per game than any other team.

The Thunder, however, held Victoria to less than 10 goals per game as Scigliano finished the series with an .812 save percentage. A big difference in the series was also special teams: the power-play opportunities were nearly identical with Victoria receiving 26 chances with the man advantage over the six games while Langley has 25 chances.

But while Victoria cashed in just five of their opportunities (.192 per cent) the Thunder scored on 15 of their 25 chances, a .600 success rate.

Langley’s full offensive arsenal was also on display for five of the series’ six games.

Dobbie and Dickson finished one-two in goals, assists, points and points per game as Dobbie had 12 goals, 27 assists and 39 points for 6.5 ppg while Dickson had 13 goals, 20 assist and 33 points, for 5.5 points per game.

Among Dickson’s 13 goals, he scored all four game-winning goals in the series.

Up next for the Thunder will be the WLA Finals, which get going on Friday, Aug. 19 at Langley Events Centre with game one against the Nanaimo Timbermen. Game time is 7 p.m.