Amputee or not, Danielle Ellis has always had an inborn passion for sports and an insatiable appetite to compete.

It’s something she credits and occasionally blames on her parents, who have always pushed her to pursue her dreams.

So proudly taking her position as a member with Team Canada in women’s sitting volleyball, she returned home from the Netherlands late last month content with a seventh-place standing in the world paravolley championships – only because she knows they’ll do even better next time.

“The games were good,” the 26-year-old Langley City woman told the Langley Advance of the world competition.

“Our first two matches (after the first set against Rwanda) we found our groove. It was a surreal experience how connected we were on the court,” Ellis said of Team Canada.

Team Canada was one of 16 women’s teams to participate in the championships that ran from July 15 to 22.

“We set ourselves a high standard for the rest of the tournament. Unfortunately, we couldn’t hold that through our third match (vs. Netherlands) and China and Brazil overpowered us. Going into the game against China, we knew they were a better team, but we had hoped to come out stronger and show more of what we were capable of. It’s hard going all the way to the games, after training so hard for so long, and not playing to your potential,” she said, recounting the competition.

“Thankfully, we found it again in our last match, and played as a unit, followed our game plan and managed a win over the home team for seventh place,” explained Ellis, who was one of the team’s top scorers during the competition.

Her team is made up of athletes with physical impairments, six players out of Alberta, one out of Saskatchewan, one from Ontario, and two from B.C. – including Ellis and Burnaby’s Felicia Voss-Shafiq – whom Ellis trains with twice a week.

“Our goal for the tournament was top eight. We had an opportunity to place higher, but in the end we are proud of our finish and excited to go home and train harder, longer to come up closer against the teams that ranked above us. We know we can get there and we know what we have to do, so an experience like this will hopefully just open more doors for us to compete at a higher level next time,” Ellis said.

Walking away from the Netherlands with a world ranking gives them some clear direction on where to improve, said head coach Nicole Ban.

“Coming into worlds we had a goal to be top eight in the competition, coming seventh is great for us, and I am so proud of the heart our team has showed. Now we are so eager to keep pushing boundaries and to continue this growth,” Ban said.

“Seventh is the best finish (so far) for this program at a world championship, which is something to be proud of, but with that being said, these matches have allowed us to identify key areas to improve on at training camps when we return to training in Canada,” she added.

“This was a great competition for us. We were able to really showcase how much we have changed and improved since Rio 2016, and that is always so exciting,” she said.

“We’ve been slowly climbing the past few years, and I can’t wait to keep putting in the work, and one day (soon) be in one of the top spots,” she hopes, noting their next competition will be a qualifier for the PanAm Games in early 2019.

“Being only six to eight months away, we won’t have much downtime,” Ellis said.

She and Voss-Shafiq start back on the court in mid-August, and Ellis will be working with her strength and conditioning coach.

In the meantime, she’ll be doing some off-season training, and hopes to get in some extra yoga sessions, while work on her running before the hard work resumes.

Ellis lost her right leg below the knee due to cancer as an infant, but that has never deterred her from competing.

“When I was two weeks old, my parents took me in to see my family doctor about a small lump growing on my foot. After some testing, it was discovered to be cancerous (rhabdomyosarcoma, to be exact), and at two months old I had my right foot amputated.”

She spent more than a year in BC Children’s Hospital receiving chemotherapy, and happily reports that she’s been cancer-free since.

With all the hospital visits over and done, she took up gymnastics as an infant, and it was apparent immediately her inclination for sports.

She subsequently gave that up at age eight, only so she had more time to pursue baseball and soccer.

Then, at age 11, she took up volleyball. But it was the introduction to sitting volleyball, at age 16, that changed her life.

“I always loved playing standing volleyball. It’s such a fast-paced, high adrenaline, powerful sport. Switching to sitting volleyball was an easy shift, and after getting over the sore butt, it was love at first contact,” she shared.

After attending a few drop-in sessions at GF Strong, it became evident she would love the sport. So, when the Canada had its first women’s training camp in early 2008, she was there.

From 2008 to 2012 she enjoyed her first run as a member of the Canadian squad for women’s siting volleyball.

After falling short in qualifying for the London 2012 Paralympic Games, however, Ellis stepped back – disillusioned and disheartened.

“After months of training full time and giving it our all, we came away with third in the tournament, but required a silver medal to qualify for the Paralympics. To say it was devastating, was an understatement,” she recounted.

“Coming home after all of that, I was depressed and no longer enjoyed playing the sport I had been so in love with. I was angry at myself and my team, so finally decided it was time for me to move on and find out what there was for me outside of sport. So, I did.”

She went back to school and became a licenced paramedic and got a job with BC Ambulance – serving as both a paramedic and dispatcher. She and her partner bought an apartment in Langley, and she found what she describes as “a different kind of peace and happiness.”

After a few years away from any athletic pursuits, Ellis was invited back in 2015 for tryouts in sitting volleyball.

“It definitely wasn’t easy coming back… I won’t lie, after putting myself out there in 2011, I was nervous to come back, but I knew how much joy the sport had once brought me and I wanted to feel that again! I came out, tried it, and remembered how much I loved it, so I stuck with it…” Ellis said. She’s glad she did.

Eventually she selected to again represent Canada on the world stage – this time at the Paralympic Games in Rio in 2016 where they also placed seventh.

“I truly believe my growth as a person and as an athlete has been huge over the past few years. Leaving sport in 2012, I still felt like a child in a lot of ways. I didn’t have much for life experience or hardship and I didn’t fully appreciate the opportunity I had. Coming back to sport after even just three years, I finished school, found a career I love, found a life partner who makes my world go ‘round, and we found a house that we have made a home. Now, I feel as though I can appreciate each aspect of my life more fully,” she explained.

“I have been able to set priorities and that has allowed me to truly appreciate every moment. I recognize now, how important work/life/sport balance is and I’ve been able to manage my time better to make the most out of every day. On top of that, I feel more mentally stronger as an athlete. I’m able to take in more information from my coaches and implement it in game play.”

Sports a huge part of life

Ellis hopes others can discover the satisfaction, contentment, and camaraderie that she’s discovered in her sport.

While she wishes she’d discovered this sport earlier in life, she remains hopeful that more people become aware of it and other adaptive sports.

“It’s not that I needed a sport to adapt to, as a kid, but the camaraderie of playing aside athletes with other physical impairments, and the opportunity to represent my country in a Paralympic Games is like nothing else,” she said.

“I feel sad that I wasn’t aware of the opportunity until I was 16, and I hope more young amputees are given the chance [earlier in life]. I feel sport is what has empowered me and helped shape me into who I am. I was lucky to be involved with able-bodied sports as a child, but it is my hope that every child, able-bodied or impaired, has an opportunity to participate in sport.”

For her, she insists that her sport of choice is sitting volleyball. But it can be any sport.

“Sports have always been a huge part of my life… being able to represent my country, doing what I am so passionate about, is a real honour and I strive to be the best that I can be every day.” 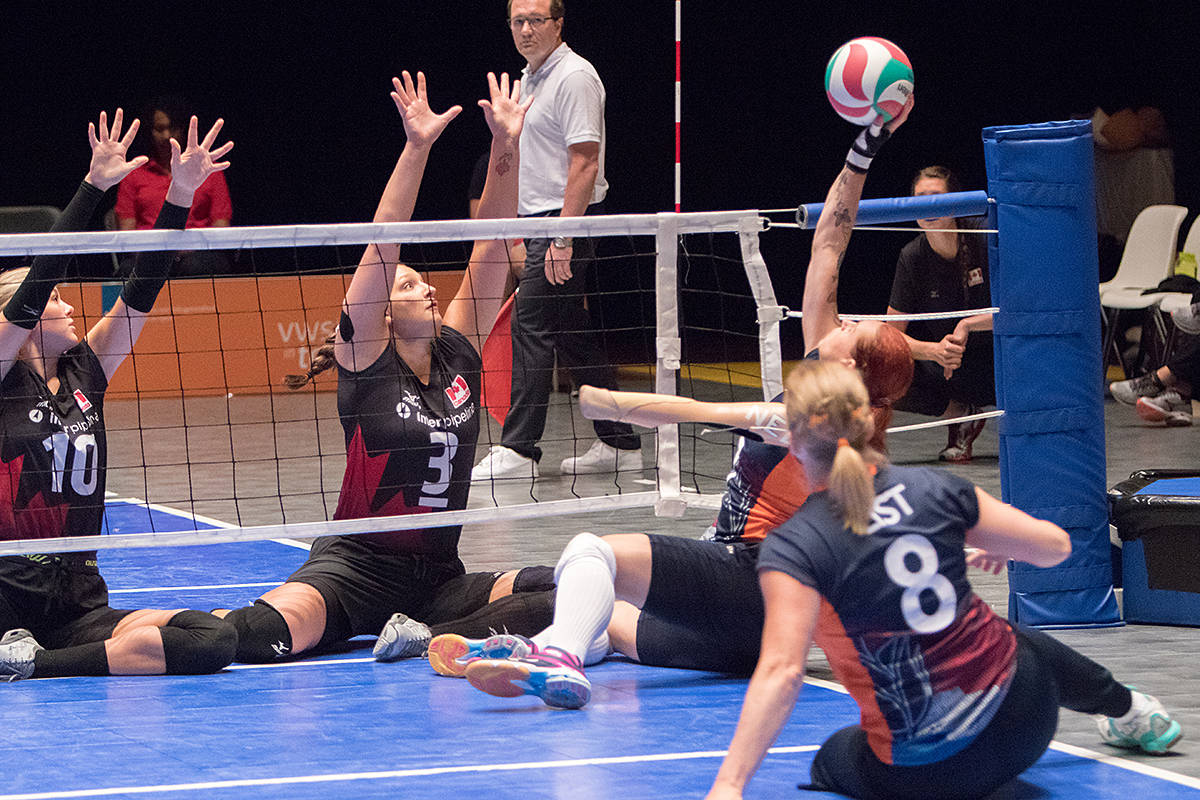 Langley’s Danielle Ellis trains twice a week with teammate Felicia Voss-Shafiq of Burnaby, travels to Edmonton once a month to train with the entire team, works out with a strength and conditioning coach at the gym five to six days a week, and sprinkles in some yoga and running for good measure. (World ParaVolley/Special to the Langley Advance) 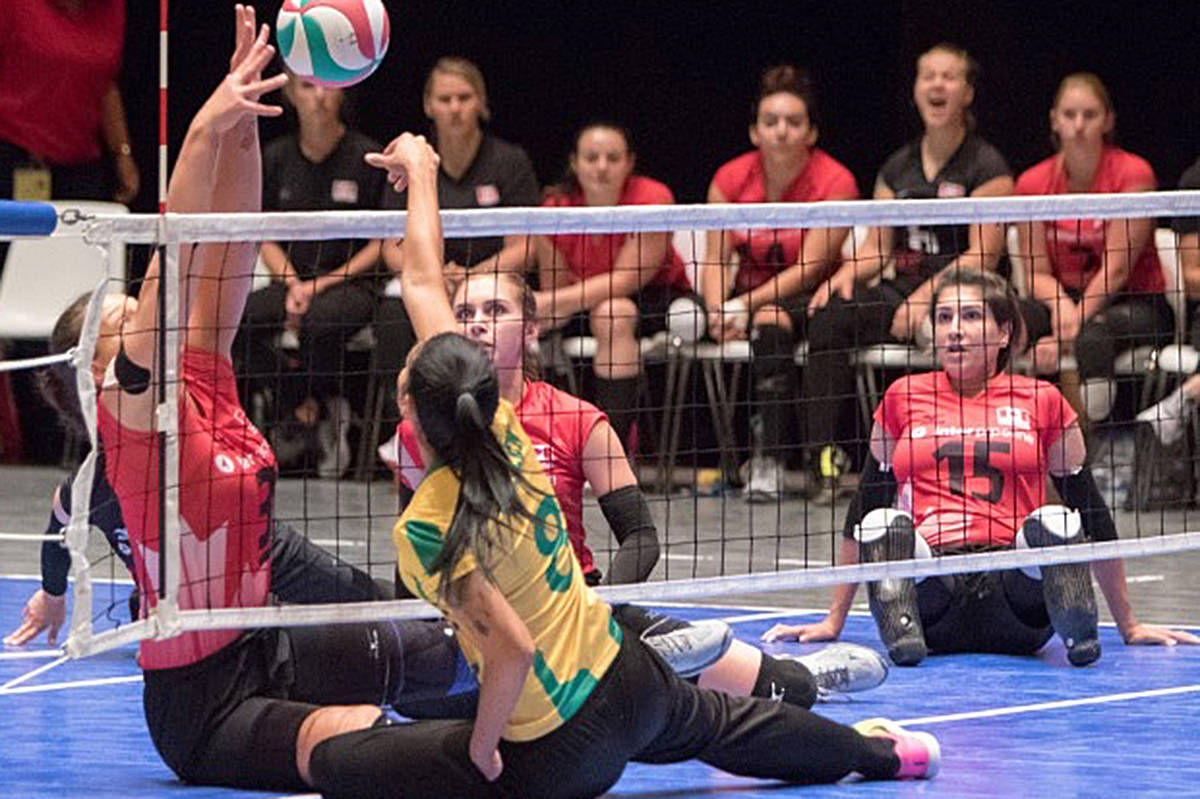 Langley’s Danielle Ellis trains twice a week with teammate Felicia Voss-Shafiq of Burnaby, travels to Edmonton once a month to train with the entire team, works out with a strength and conditioning coach at the gym five to six days a week, and sprinkles in some yoga and running for good measure. (World ParaVolley/Special to the Langley Advance)

Langley hosts dog racing for all types of canine