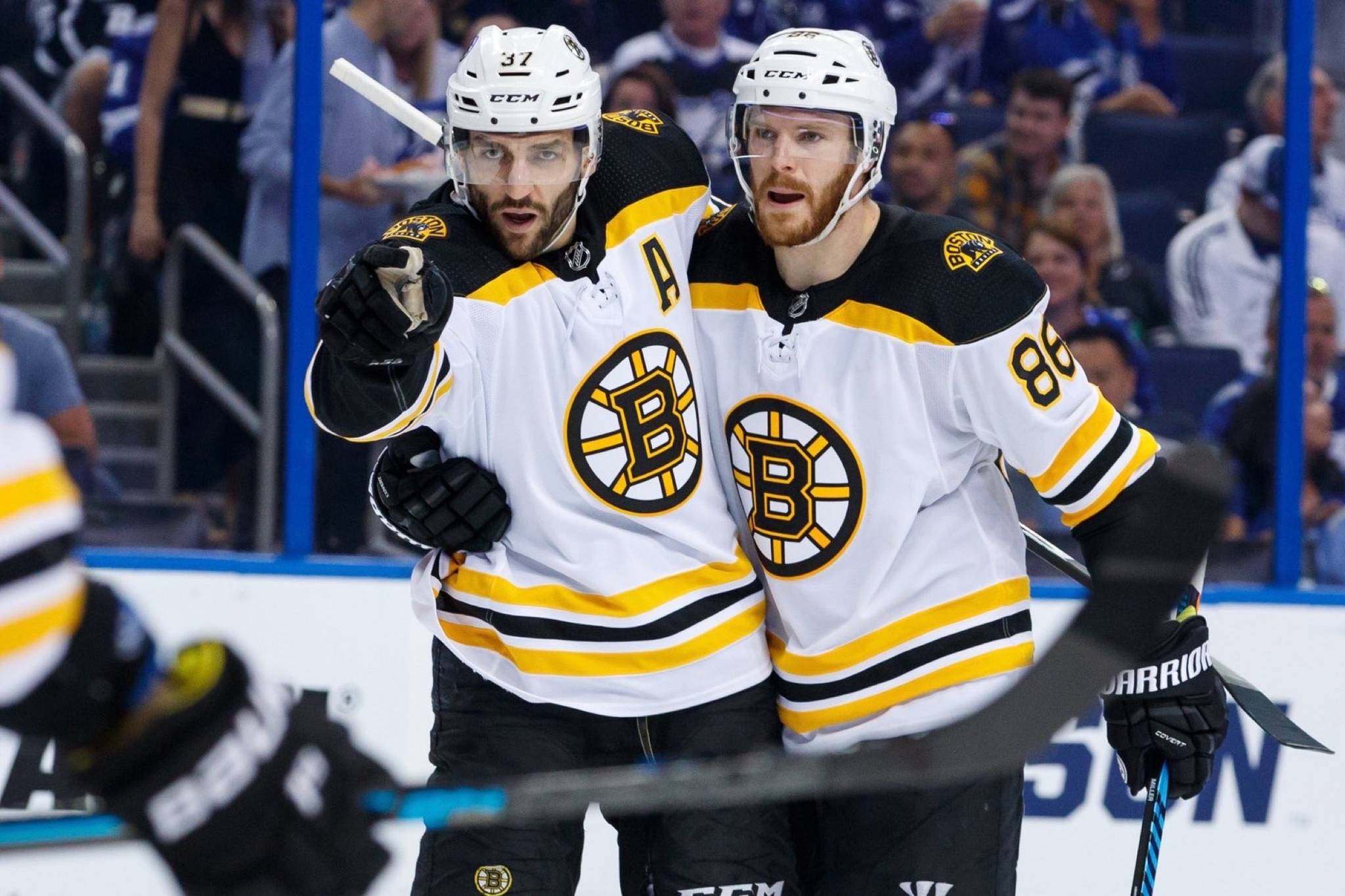 Bruins forward David Pastrnak (right) is tied for the league lead in playoff points with 17 in eight games. Patrice Bergeron (left) is tied for fifth with 11 points (via @NHLBruins/Twitter)

Boston’s top line is on fire to begin the series, as Brad Marchand, Patrice Bergeron and David Pastrnak combined for 11 points in the Bruins 6-2 win in Tampa in Game 1. Boston acquired forward Rick Nash from the New York Rangers at the trade deadline, and he had himself two goals in Game 1. Tampa Bay’s first line of J.T. Miller, Steven Stamkos and Nikita Kucherov was held pointless in the frame.

🎥 Brad Marchand, David Pastrnak, and Jake DeBrusk speak with the media following the #NHLBruins win over Tampa in Game 1: pic.twitter.com/sUMvb0ixMl

Pittsburgh was able to come back from a two-goal deficit in Game 1 with heroics from Jake Guentzel and Sidney Crosby. Guentzel is now tied for the league lead in playoff points with 17 in eight games while Crosby is third with 15 points in eight games. Washington was able to bounce back in Game 2 with Captain Alex Ovechkin leading the way. Caps’ Lars Eller had himself three assists in the 4-1 win. Ovechkin has two goals in the series so far and looks red hot.

In Game 1, the Jets’ top line of Kyle Connor, Mark Scheifele and Blake Wheeler combined for five points in the 4-1 win while goaltender Connor Hellebuyck made 47 saves in the victory in Nashville. Game 2 was a thriller as Nashville won 5-4 in double overtime. Their first line of Viktor Arvidsson, Ryan Johansen and Filip Forsberg had three goals and five assists in the frame. Arvidsson with the late-game heroics had the game winning goal. Scheifele continued his streak in Game 2 with two goals and an assist. Pekka Rinne picked up the victory while making 46 saves.

#NHLJets brought the #WPGWhiteout to Nashville last night, opening the series with a 4-1 win!

Check out the photos!

Next Game: Tuesday, 5 p.m. in Winnipeg

Vegas came out red hot in Game 1, scoring three goals in 90 seconds in the first period in which they ultimately won 7-0 at home. Sharks goaltender Martin Jones let in five goals on 13 shots in the frame. Jonathan Marchessault, Reilly Smith and William Karlsson all had three points on the night. Eleven different players on Vegas recorded a point that night and goaltender Marc-Andre Fleury recorded his third shutout in five playoff games. Game 2 was a different story as the Sharks won 4-3 in overtime. Fluery gave up more goals in the game than he had all playoffs. Sharks forward Logan Couture finished the game off in double overtime with his second goal of the game. Karlsson had two goals for the Golden Knights.

Bringing the big W heading back to the Bay. 🎶#NightyKnight pic.twitter.com/uylHe8o9uV

Vancouver’s very own Ryan Johansen had himself two goals in Nashville’s 5-4 win in Game 2.

North Vancouver’s Martin Jones was able to bounce back from Game 1 and snag a victory for the Sharks in a 4-3 win in overtime while making 26 saves.

Shea Theodore, a Langley native, has been chipping in from the defensive end for Vegas as he now has a goal and an assist in round two of the Stanley Cup Playoffs.

Jake Guentzel: Guentzel has been on fire lately. In Game 1 against the Capitals he single-handedly turned the game around for the Penguins by scoring the game-winner and assisting on two other goals in the third period alone in the 3-2 win. He snagged another assist in Game 2’s loss to bring his total to 17 points in eight games, all while playing on a line with Sidney Crosby.

David Pastrnak: Boston’s first line has been vital to their team’s winning success along with Brad Marchand and Patrice Bergeron. They exploded in Game 1 against Tampa Bay with 11 points. The entire line is in the top five for scoring in the playoffs with Pastrnak leading the way with 17 points of his own. The Czech Republic native, who was drafted 25th overall in 2014, is showing why he is an elite player in the NHL.