Three straight victories have the Langley Rams in the playoff picture, but the next three weeks should determine how far the junior football team has really come.

The Rams held off the Kamloops Broncos 27-21 on Saturday at McLeod Athletic Park to improve to 4-3 in the BC Football Conference, dropping the Broncos to 1-6 on the season.

But Langley’s four victories have been two against the Broncos and two more against the winless Valley Huskers (0-7).

The true test will be over the season’s final three weeks as Langley battles the Westshore Rebels (6-1) this Saturday at MAP before closing with road contests in Kelowna against the first-place Okanagan Sun (6-0-1) and in Nanaimo versus the VI Raiders (3-3-1).

In Saturday’s victory, Langley had to hold off the charging Broncos, who were playing for their playoff lives.

Kamloops had three cracks to score the go-ahead touchdown in the final minute, but all three times, the Rams defence answered the ball each time, including Denis Olivera coming up with an interception on the last attempt.

The Rams trailed 7-0 after one quarter with the Broncos capitalizing on a turnover at midfield, capping the drive with a short touchdown run from Trent Price.

Langley scored twice in the second quarter, the first on an 18-yard touchdown pass from Rylan Matters to Khalik Johnson, and the second along the ground from Nathan Lund to lead 13-7 at the half.

The second half saw the teams trade touchdowns with Maximilian Joseph — a Langley Secondary graduate — scoring both along the ground for the Broncos, while Lund rushed for one more score for the Rams and Matters connected with Nick Agnoletto on a 70-yard touchdown pass to put Langley ahead for good.

Langley was tested as with just over a minute remaining, the Broncos got the ball back and moved the ball to Rams territory, but despite getting the ball to the 15-yard line — and getting multiple extra shots because of penalties — the Broncos could not punch the ball in.

Matters finished 16-for-27 for 339 yards and two scores, including an 88-yard completion to Joel Klaasen.

Klaasen, Agnoletto and Johnson all finished with 100-plus yards receiving while Lund had 124 of his team’s 192 yards rushing.

Kyle Clarot continued his stellar rookie season, finishing with six tackles, while also knocking down a pair of passes and Nathan Murray had five tackles and an assisted tackle. Kyle Sagmoen and Nick Westad each had a quarterback sack while Rene Sencio and Carmelo Brancati shared a sack.

The Rams play their home finale on Saturday against the Rebels with a 4 p.m. kick-off.

Entry fee is $75 and includes food and one beverage. Re-buys are available for $25 and there is a $50 one-time top-up at the mid-tournament break.

Tickets are available at the door or PayPal at www.langleyrams.com. 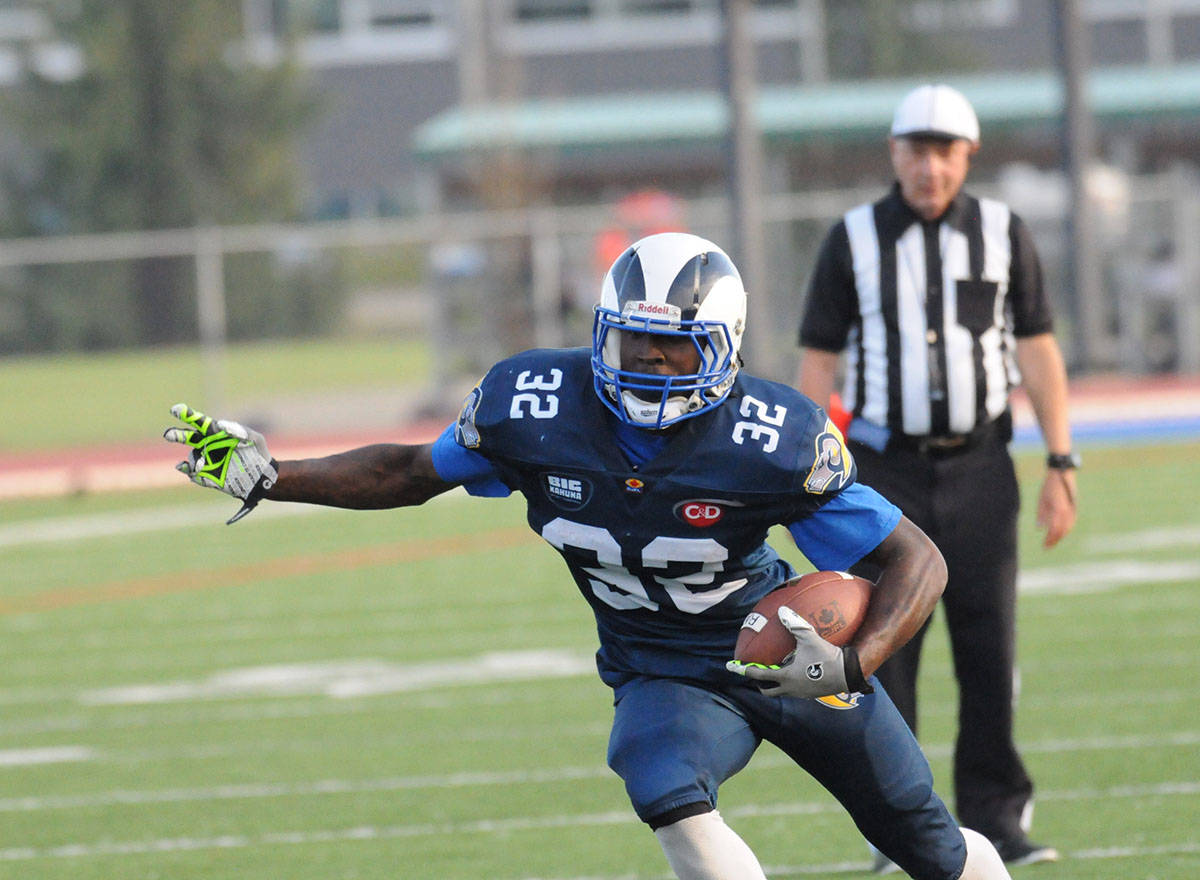 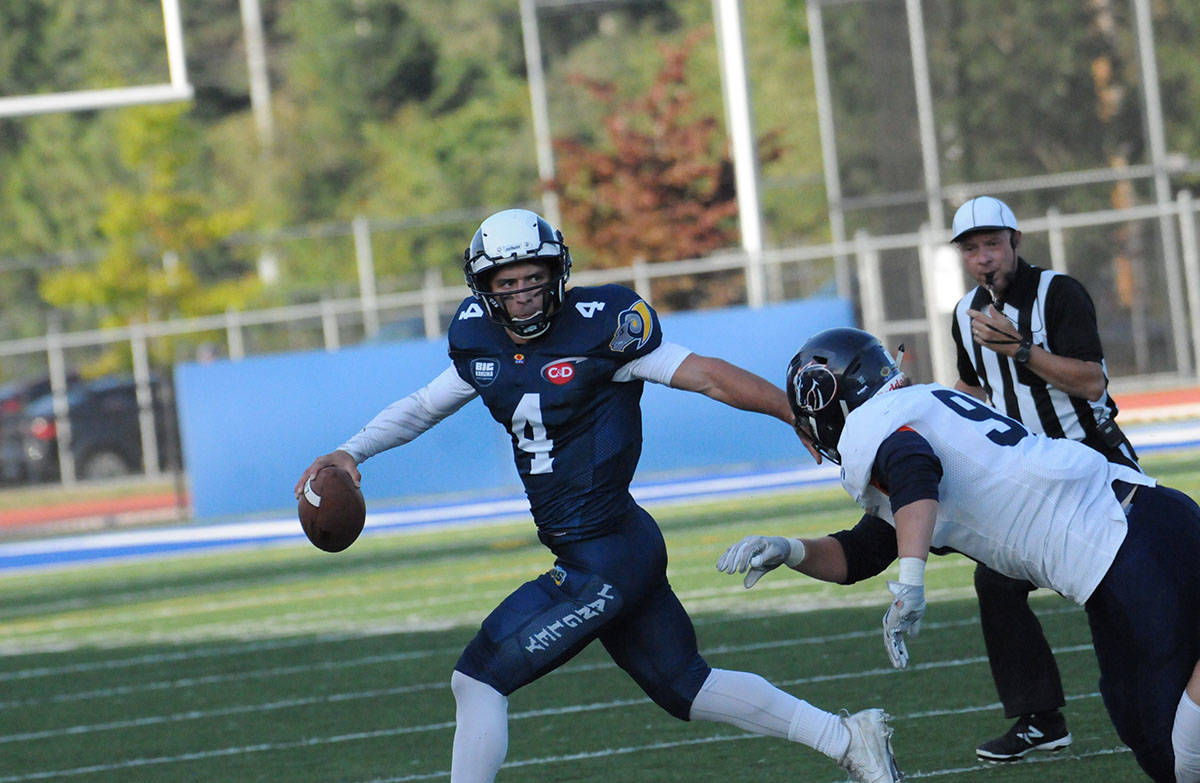 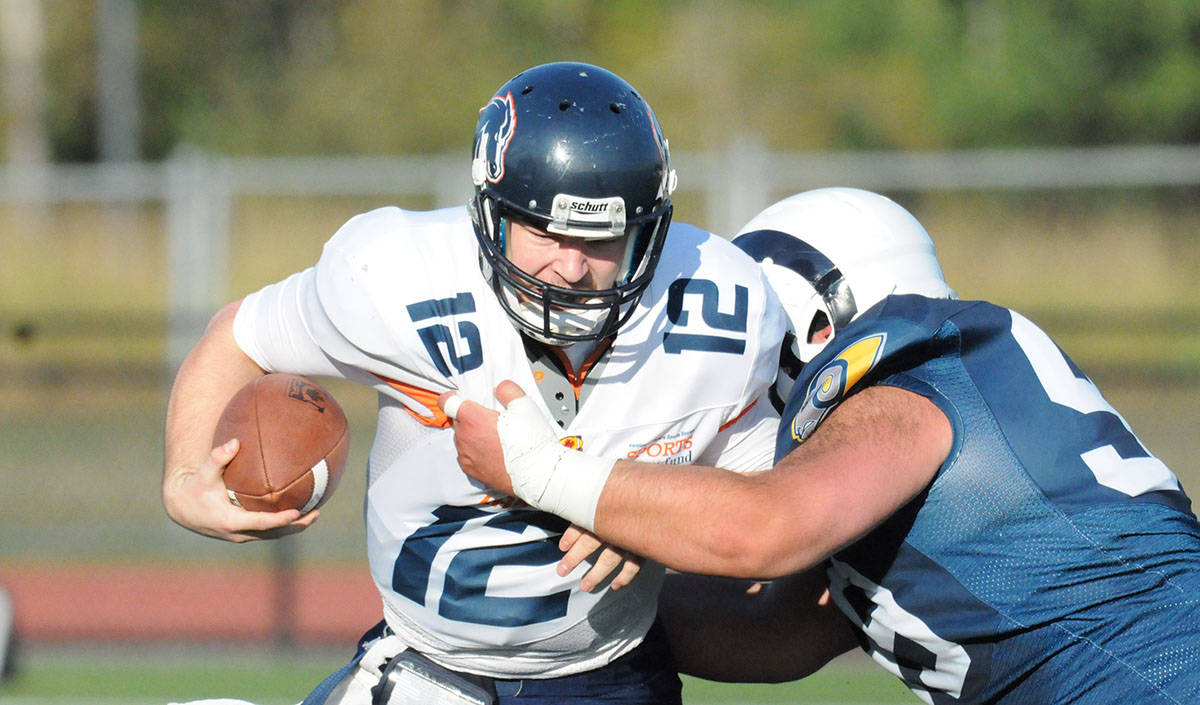