The Cloverdale Tritons swim club marked its 25th anniversary this year, and as they keep faithful to certain club traditions, new swimmers, coaches and ideas have made this one of their most successful years on record.

The club recently attended the British Columbia Summer Swimming Association (BCSSA) Fraser South Championships, from Aug. 4–6, in which the eight clubs of the Fraser South Region compete in individual medley (IM) in freestyle, backstroke, breaststroke and the butterfly, as well as medley and freestyle relays.

Twenty-two swimmers, including four coaches, qualified to attend the BCSSA provincial championships by placing in the top three for their division or by achieving a provincial qualifying time. Later, it was announced that three more swimmers would also qualify due to a “wild card” draw for provincials entry, rounding out the total number of qualifiers to 25.

The Tritons have also broken 16 club records — two of which had been in place for more than 20 years.

This year’s success can’t be attributed to any one thing, according to Director-at-Large Sarah Schnare and Director of Officials Chris Miley. Rather, it’s about a balance of tradition and bringing in new ideas and new strengths.

“Our new coaches have brought some different things to the table,” said Schnare, explaining that this year’s training regimen has included activities such as trapeze yoga.

“It connects dry land activities with the training in the pool,” said Schnare, explaining that the program looks at stretching and flexibility in a new way. Another successful addition has been the inclusion of sports psychology sessions.

“They haven’t changed everything,” Schnare says of this year’s new coaches, “which I think is kind of that balance of coming up alongside an existing program and injecting some new, fresh ideas.”

“We have a batch of new kids who contributed too,” said Miley.

It can be difficult, Schnare explains, when new families come into the program, because many of the participants have been in the club for more than a decade. “When new members join, it changes and you adjust,” she said.

Miley spoke to the positive influence the new swimmers brought to the club. He said that Jovan Santiago, one of this year’s provincial qualifiers, has been a particularly great influence on the club.

The success also comes down to another simple fact; the swimmers put in hours of practice.

From May to August, the swimmers are “basically in the pool, three hours a day,” according to Schnare, and when you factor in swim meets, it’s an everyday commitment.

“You’re here twice a day, and then on the weekends, when you think you get a chance to sleep in, you don’t,” said Miley. “You’ve got a meet, and you’re up even earlier.”

“It really speaks to the work ethic of these kids,” said Miley. “They’re the once getting in the pool putting in the work. They’re the ones doing the miles after miles of swimming. And it’s paid off.”

When The Reporter caught up with the swim club during a practice session on Friday morning (Aug. 11) and spoke to some of the record-breaking swimmers, there was a common theme; it had been a surprise for many of them.

Wyatt Schnare broke a record from 2008 by a 13-second margin, and had “no idea” he was that close to breaking a record at all, not to mention by such a wide margin.

“It was a surprise, coming out of the race,” he said.

“I hope that one can be something that the younger kids that are in the club now can strive towards,” he said.

Schnare also broke the record for backstroke, shaving four seconds off of a time that had been unbeaten since 1997.

There were many great feats this year – Darby Walsh broke the Div. 4 boys 200 m record by 11 seconds and Sawyer Miley, 10, broke a record that has been in place since 1996 – but one of the most satisfying moments was when Jovan Santiago beat the 200 IM record for Div. 7 boys.

“It was set in 2009, and I beat it by just under a second,” said Santiago. “Going into it, I was just aiming for PQT [provincial qualifying time], but I guess I ended up breaking a club record.”

The victory was made all the sweeter when Santiago discovered who had been the previous record holder.

“The person I beat, he’s my high school coach for swimming, so I’m going to mention that to him,” said Santiago.

“[It felt] pretty good. I can’t wait to rub it in his face,” he said, laughing. “He might make me swim more, but yeah, it felt fantastic.”

The Cloverdale Tritons also has five relay teams set to compete at provincials, one of which has been fighting to qualify as a team for five years.

Emily St. Denis, Amy Wheatcroft, Faith Khan and Savannah Miley knew they were close to the qualifying time, and they knew that if they could take a half second off their times each, they could do it.

“It motivated us,” said Miley. “We had a chance. So we took off the time.”

They finished second this year at regionals, qualifying for provincials, and it was an emotional moment.

“When I touched the wall and saw that we came second, I started screaming and crying,” said Miley. “Faith started pounding the ground, she was so excited. Emily—“

“I was jumping up and down,” said St. Denis.

The team said they were “pretty excited” for the upcoming relay race at provincials, too.

The BCSSA provincial championships will be held in Kamloops from Aug. 18–20 at the Canada Games Aquatic Centre in Tournament Capital Centre. 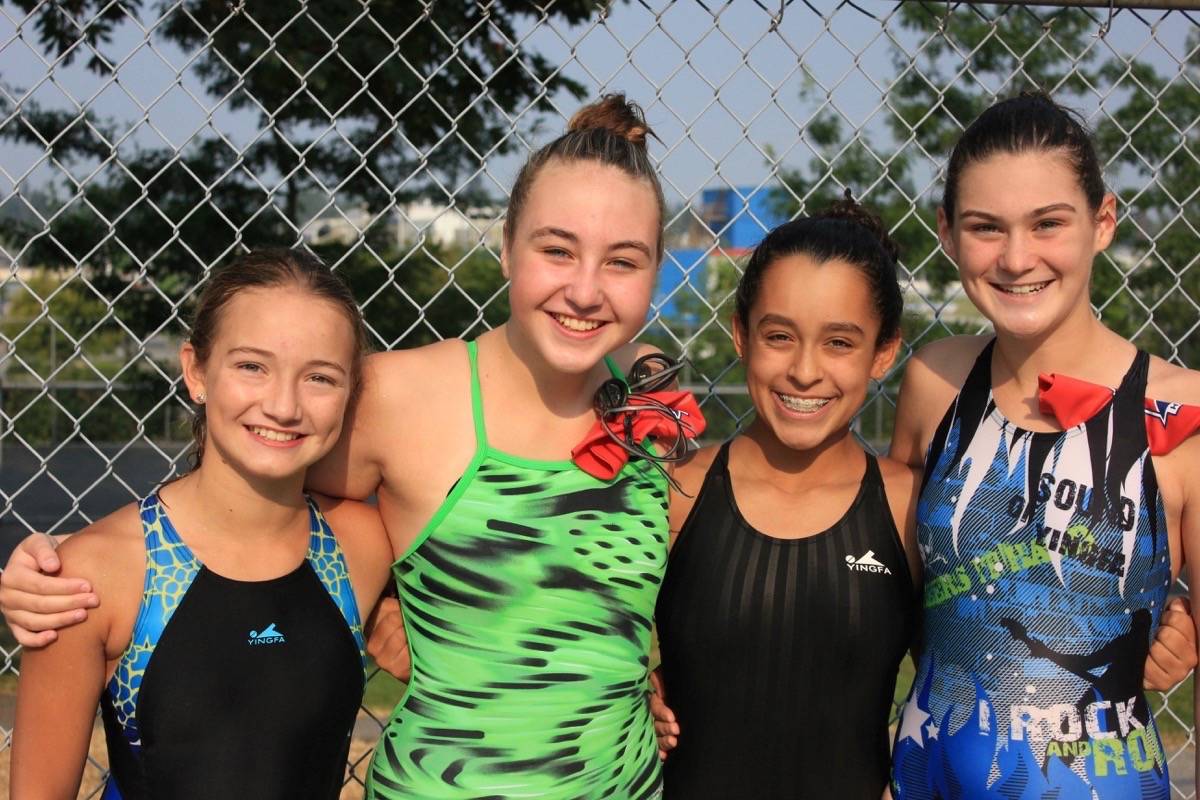 Langley paddler gave her all at Canada Games