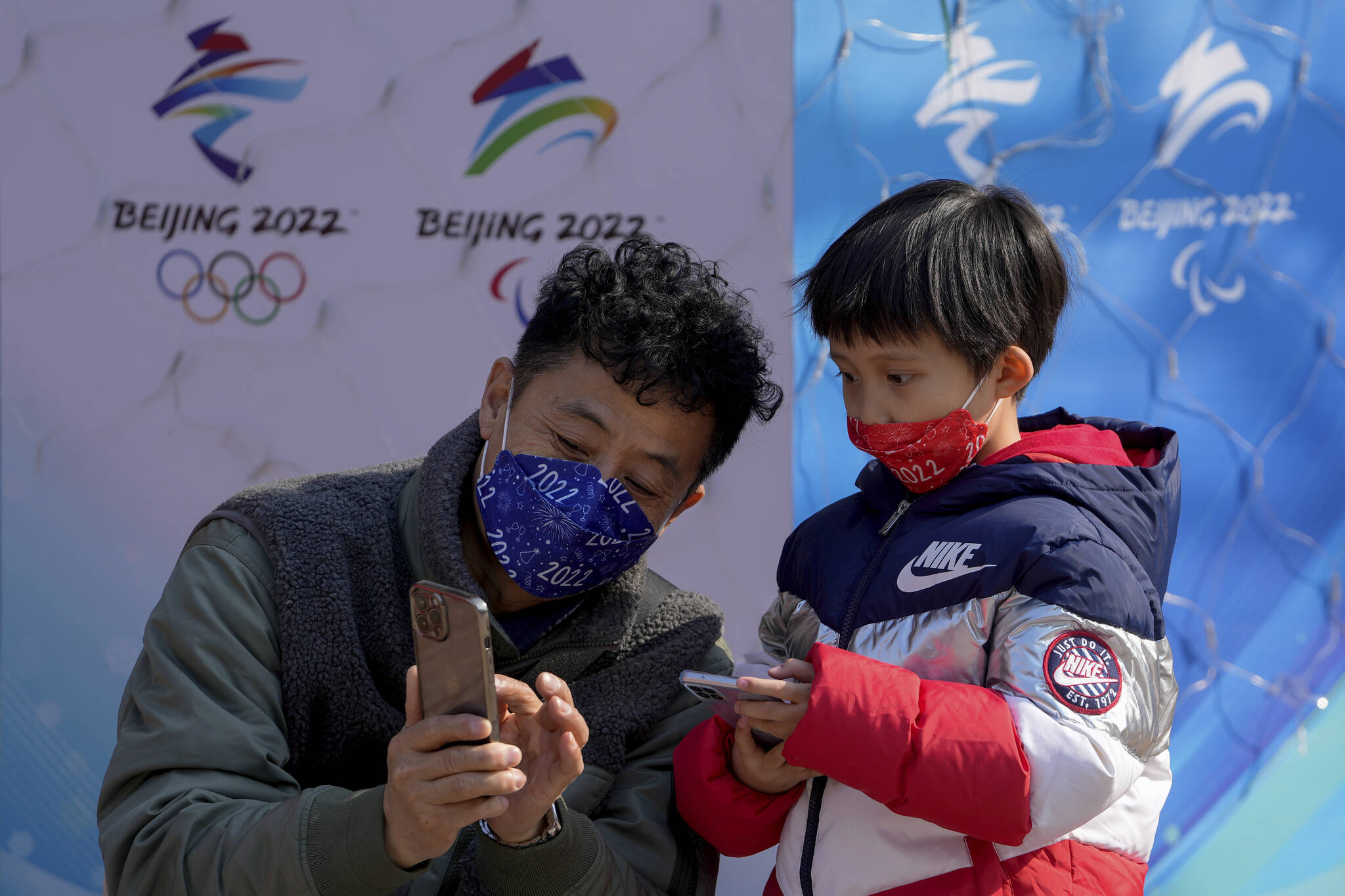 A man wearing a face mask to help protect from the coronavirus teaches a masked child how to take smartphone picture near the Beijing Winter Olympics decorations at the Wangfujing pedestrian mall in Beijing, Wednesday, Feb. 9, 2022. (AP Photo/Andy Wong)

The coronavirus mitigation measures at the Winter Olympics can be invasive and baffling — but they appear to be working.

Organizers reported nine new coronavirus cases Thursday, the third consecutive day that positive tests have been in the single digits.

The numbers represent a steep drop from the single-day high of 55 new cases recorded last week amid a flurry of pre-Games arrivals.

Since Jan. 23, organizers have reported 407 cases among the athletes, team officials, media and others inside the bubble separated from the rest of Chinese society where the Olympics are being held.

“We are now seeing more people coming out of isolation than going into isolation,” said Brian McCloskey, chairman of the expert medical panel for the Games. “We like that, but it does not mean we are comfortable because we can never be comfortable with coronavirus.”

The U.S. team reported no new positive tests among its 550-plus person delegation Thursday. One athlete is in isolation.

Though the exact total of bubble residents hasn’t been made public, organizers are performing more than 70,000 coronavirus tests each day on those inside.

Every person in the bubble — or closed loop, in Olympics jargon — is required to have their throat swabbed each day to test for the coronavirus. The tests are tracked via bar codes — the code on the vial containing the sample is scanned, followed by the code on the credential of the person being tested. To exit bubble hotels, the credential has to be scanned again as part of the screening process. Missing a test could result in being barred from leaving.

Anyone testing positive is whisked to an isolation facility. That hasn’t always gone smoothly, as some of those isolated have complained about the size, cleanliness and other problems with the accommodations.

“Some of the people who are now in isolation are there because they have been infected unfortunately and are unable to train at the training facility or work at their workplace,” said Chun Huang, deputy director general of the organizers’ office and pandemic prevention and control. “So they did have some complaints, and we responded to their complaints in a timely fashion.”

There are temporary walls around the bubble hotels and police stationed out front. Those inside are limited to traveling between a small list of venues and hotels on special buses, taxis and bullet trains that aren’t used by the general public.

Disinfecting robots roam hotels, plastic dividers separate each person in dining rooms, plastic gloves must be used at buffets, venues have isolation rooms in case someone tests positive, staffers in hazmat suits are commonplace, and sensors automatically scan each person’s temperature at entrances. Everyone must be fully vaccinated against COVID-19 or have served a 21-day quarantine in China before entering the bubble. That’s all in addition to the mandatory smartphone app where credential-holders are required to input their temperature and answer a list of questions about their health each day.

Wearing an N95 or KN95 mask is mandatory outside of your room, unless eating in approved areas.

When a journalist slipped her mask down for a half-second to bite into an apple inside the media room at the Yanqing National Alpine Centre earlier this week, a staffer ran over and demanded she stop. Other staffers carried signs reminding credential holders to wear masks at all times.

Staffers spray parking lots where new arrivals transfer buses with disinfectant. They do the same to parking lots and gates surrounding bubble hotels, always wearing hazmat suits. The staffers often spray each other when finished.

The measures reflect China’s zero-tolerance approach to the coronavirus.

“I feel like they’ve thought of everything, to be honest, from a sanitation and disinfection standpoint,” U.S. Alpine skier Mikaela Shiffrin said last week.

She added: “I feel like this is probably the most sanitary you’re every going to get in an Olympic Village.”