The stat sheet may have said ‘unassisted’ but a big assist on Ty Ronning’s franchise-record setting 49th goal of the season has to go to his father, former NHL-er Cliff Ronning.

Ronning stripped Seattle’s Jarret Tyszka of the puck in the Thunderbirds zone during overtime and beat goaltender Liam Hughes for a 2-1 Vancouver Giants victory on Friday night at the Langley Events Centre.

The goal was Ronning’s second of the night and helped him surpass Evander Kane’s mark of 48 goals set in 2008/09. Kane recorded 48 goals that season in 61 games while Ronning surpassed the mark in game 53.

“I just thought of a move my dad always taught me — fake shot and to my back(hand) and you have to get it over the pad,” he said.

“Just countless hours practising it. Coming in on that angle, I knew it would work if the goalie bit, and he did, and it’s in the back of the net.”

The Giants had no business even being in overtime were it not for the heroics of goaltender David Tendeck.

And while Ronning set a new team mark with 49 goals, Tendeck set a new personal best with 49 saves as his team was outshot 50-21.

Tendeck made 15 saves in the first, 19 in the middle stanza and another 14 in the third. The only puck to get past him was a wicked shot from Noah Philp over Tendeck’s glove and just under the bar on a partial two-on-one break midway through the third period.

Tendeck was indifferent on how much rubber he faces on a nightly basis. This was his fourth 40+ save game out of the 36 he has played.

“It doesn’t matter to me. My job is to keep the puck out no matter how many shots I get and give us a chance to win the game,” he said.

Tendeck sits third in the WHL with a 2.91 goals against average and tied for third with a .913 save percentage.

He was quick to deflect credit to the players in front of him.

“We were all doing the right things out there. All the boys, especially those young guys. It is a hard job to do and they got it done,” the goaltender said.

Heading into the game, Vancouver was missing four of their top seven defencemen and dressed two affiliate players for the game. With no Darian Skeoch, Matt Barberis, Dylan Plouffe and Alex Kannok Leipert, Marcus Kichton, Tanner Brown and Parker Hendren all suited up.

Kichton was playing his 26th game of the season and with the two ‘AP’s’, the trio have a combined 37 games of WHL experience this season, which is just over halfway a full season.

“We knew it would probably be something like this, we would need Dave to be exceptional and then get some timely scoring,” said coach Jason McKee.

The Giants had a good start to the game, firing eight of the first 10 shots on goal. But from the midway point of the opening frame to the end of regulation, the shots were 47-11.

“Our first period was pretty good but then we tapered off after that,” McKee said. ‘They got momentum on us, they were pressing us (but) we hung in there,” McKee said.

“Full credit to the guys, at the end of the day, you add up how many points you have and it might not have been textbook, but we found a way to win.”

Neither team scored in the opening 20 minutes but Ronning got the Giants on the board 6:13 into the second. He drove to the net and Davis Koch’s shot hit him and went in.

It was the fourth straight game Ronning scored and Koch now has points in five of his past six games.

And as for his new Giants goal-scoring mark — he still has 18 games to add to the total — Ronning said it is an honour to have his name atop the record books.

The Giants are back in action on Feb. 10 as they visit the Everett Silvertips. 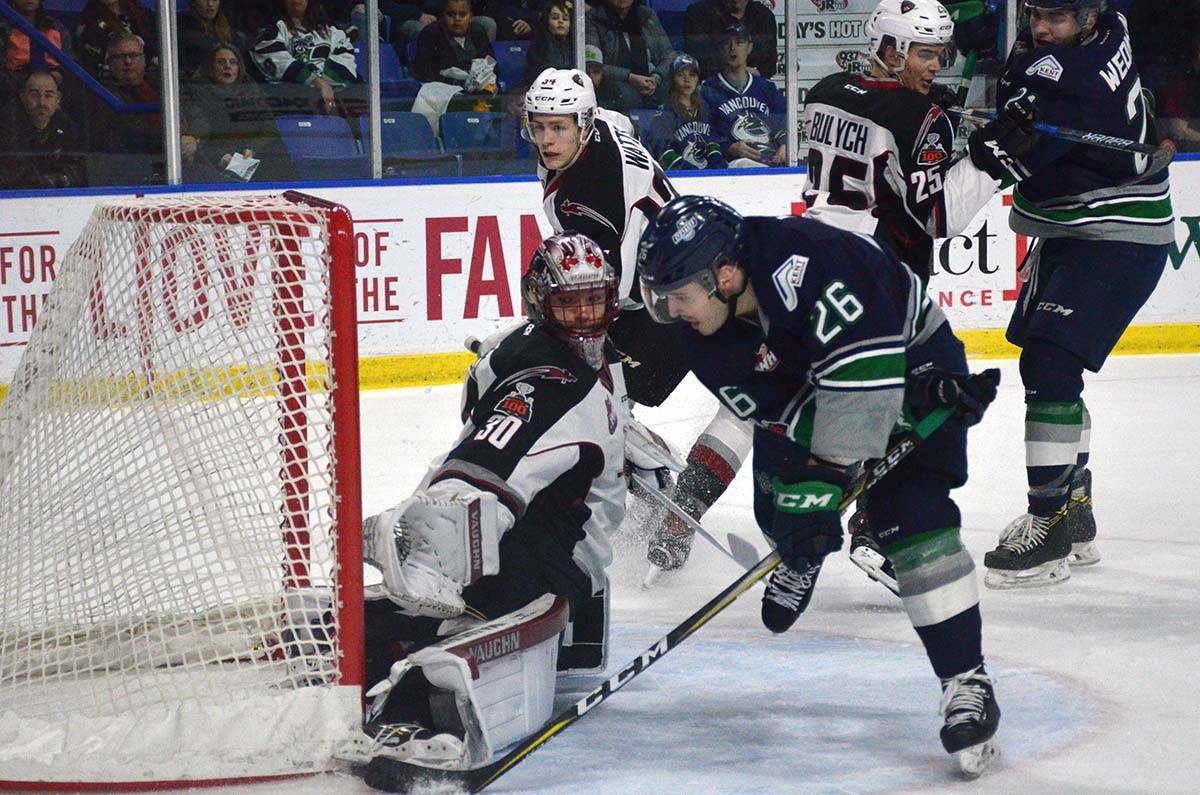 Vancouver Giants goaltender David Tendeck stretches to make the pad save against Seattle’s Nolan Volcan during the first period of Friday’s WHL game at the Langley Events Centre. Tendeck made a career-high 49 saves in his team’s 2-1 overtime victory. Gary Ahuja Langley Times