On Monday, Dec. 12, the defender visited Aldergrove Community Secondary School to speak to students and have his Team Canada jersey added to the school’s athletic wall of fame.

Waterman, who graduated from ACSS in 2014, stopped by the school to share his story and his experiences at the World Cup, as well as with a select group of students at Betty Gilbert Middle School later in the day.

During the event, the 26-year-old member of Major League Soccer’s CF Montreal thanked his many teachers and coaches and took a handful of questions from students. Questions ranged from what his biggest challenges were en route to being selected for Canada’s national team, to what shoes he was wearing, to if he met superstar Neymar da Silva Santos Júnior at the World Cup.

But the main message Waterman shared with students was that with hard work and sacrifice, it is possible to reach the pinnacle of your chosen field, whether it’s sports, academics, arts, or something else.

“My message for you guys today is to dream,” he told a packed gymnasium. “No matter who you are, where you come from or what you like to do, chase after something that brings you joy. All of you have special gifts and bring value in so many ways, and the world is waiting to see it.”

“The next step is believing that. Being yourself and trusting your decisions to do it your way and not anyone else’s. Surround yourself with people who build you up and believe in what you’re capable of, because this journey is even sweeter with the people you love. Once you have that, you can achieve something great.”

“If I had listened to (people saying) ‘be realistic’ then I would’ve never represented my country at a World Cup,” he added. 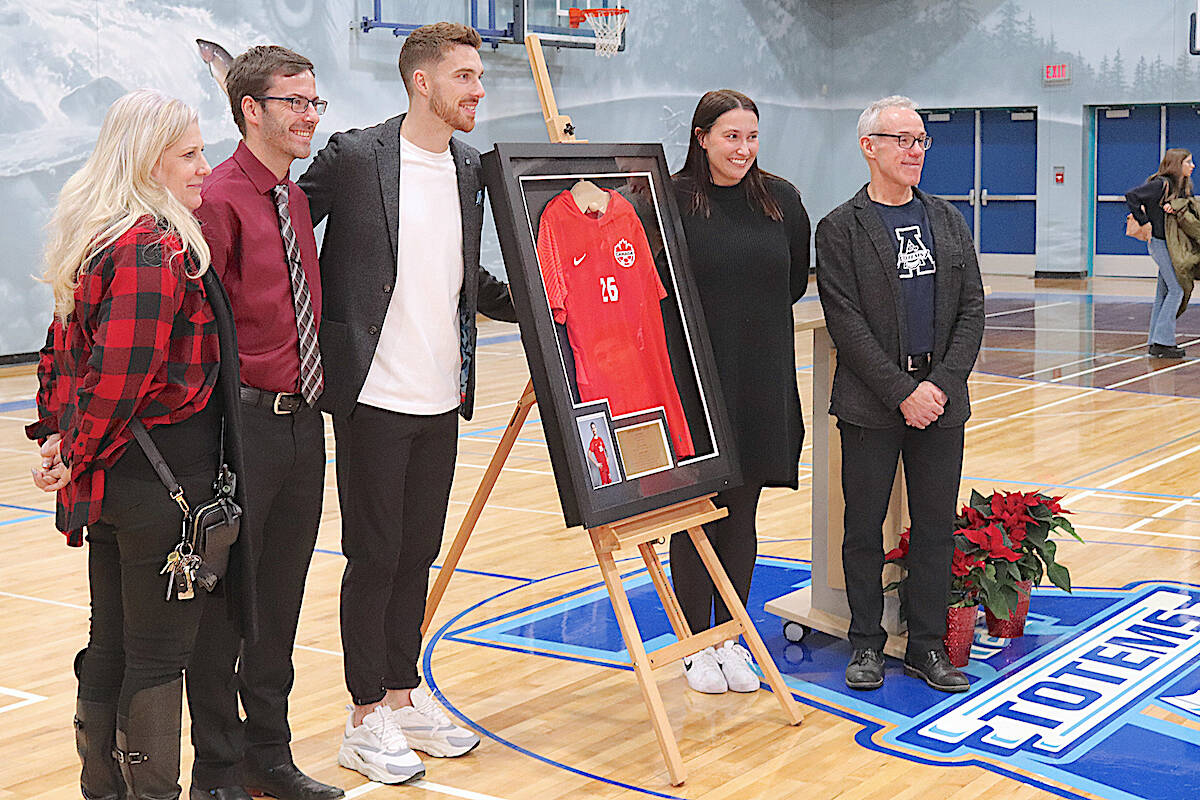 Joel Waterman (centre), who graduated from ACSS in 2014, stopped by the school to share his story and his experiences at the World Cup of Soccer in Qatar on Monday, Dec. 12. His Team Canada jersey was added to the school’s athletic wall of fame. (Nick Greenizan/ Langley School District)

ACSS principal Mike Palichuk said that having someone of Waterman’s stature come to the school and speak with students – and mingle and take selfies with them afterward – is important because it provides a road map for them as they aim to achieve their own goals.

“The fact that a young guy, born and raised in Aldergrove, found his way, utilizing the opportunities that are available to him here, and made it to the world level, is remarkable,” he said.

“And we want to make sure our students understand that the same possibilities are available to them. I feel like it’s important to stop and reiterate that to students – you can do this too if you really, really want to, and if you sacrifice and do the things you need to do to get there.”

Waterman’s MLS jersey was already hanging on the school’s athletic Wall of Fame, but the Montreal uniform has now been replaced by Waterman’s #26 Team Canada jersey. He’s the second Canadian national men’s team member to come from ACSS; school alum Randy Ragan was a member of the 1986 national team that is the only other Canadian men’s team to ever qualify for the World Cup.

Waterman said “it was amazing” to be at ACSS again, and to reconnect with a few former teachers.

He added that it meant a lot to him to know that the community was behind him as he and his teammates competed in Qatar, and he hoped his journey would continue to inspire.

“I’m here because I want to show you guys that even a smalltown kid from Aldergrove, B.C., who walked these same halls and probably got in a lot more trouble than most of you, can make it and build something great,” he told the students.

THE MOJ: Canuck free agents, pricey pitchers and the value of irrelevance