The Trinity Western Spartans made their home debut but failed to take advantage.

The men’s soccer team began a six-game homestand over the next three weeks, playing to a pair of draws to the visiting UNBC Timberwolves at TWU’s Chase Office Field.

The teams tied 0-0 on Friday night before settling nothing with a 2-2 draw the next night.

“I’m frustrated we didn’t get the victory but credit to UNBC because they came out and made adjustments and got the goals that they needed to get get back into the game,” said Spartans coach Mike Shearon.

“I thought we did enough to win it, but obviously they took care of their chances and got stuff sorted out.”

Brett Bobier put the Timberwolves ahead in the 31st minute but Leighton Johnson — with his fourth of the season — levelled the score at one 10 minutes later.

Jacob Low put the Spartans ahead 2-1 in the 58th minute before Owen Stewart pulled the visitors even in the 71st minute.

Sebastian Colyn made four saves for TWU as the Spartans were out-shot 6-4. The rookie goalkeeper from Langley also made two saves the game before to earn his first clean sheet.

The Spartans are now 1-1-2 on the season as they get set to host Thompson Rivers on Sept. 8 and UBC Okanagan on Sept. 9. Both games are Chase Office Field with a 7:15 p.m. start time. 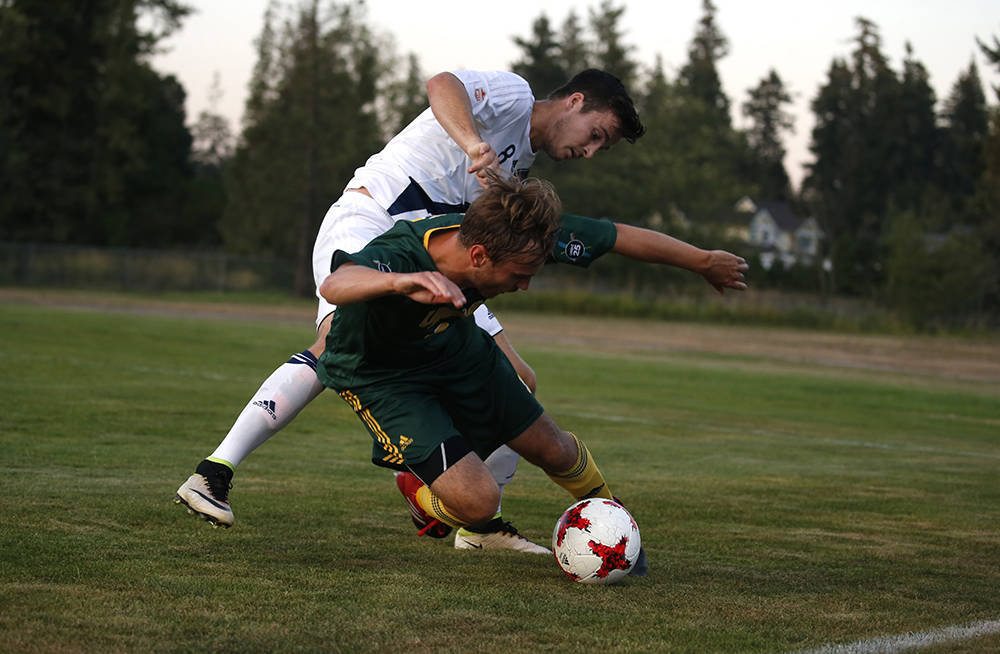 Trinity Western Spartans Leighton Johnson (left) battles UNBC Timberwolves’ Conrad Rowlands during Canada West soccer action on Friday (Sept. 1) in a 0-0 draw. Johnson did score his team-leading fourth goal — which is also tied for the conference lead — the next night but the Spartans settled for a 2-2 draw. Scott Stewart TWU Athletics