Aldergrove’s Lauren Barwick and South Langley’s Noni Hartvikson, along with teammate Roberta Sheffield, had a strong finish for Canada after the first day of Team Test competition on Saturday, Aug. 28, at Baji Koen Equestrian Park at the Tokyo 2020 Paralympic Games in Japan.

As one of only two countries to have all three combinations compete on day one, which featured Grades I, II and III, Canada provisionally sits in the gold medal position with a final score of 211.699.

Singapore currently holds silver with 200.792 and bronze is presently in the hands of Great Britain on a score of 154.254.

Team medals will be awarded Sunday following the competitions for Grades IV and V.

Quality of pace was the name of the game for Team Canada, starting with Hartvikson, who has held on to top-20 positions in the FEI Para Dressage World Individual Ranking – Grade I since 2017. Riding Onyx, whom she co-owns with Jane Macdonald, the 62-year-old put a solid first score on the board for the athletes from the north with 69.464 per cent.

“I ride to music or a metronome to get the tempo,” said Hartvikson of the work she put in to attain that marching, four-beat walk. “With Onyx’s training program, we keep it consistent. Some days he does test movements and other days he gallops so he’s fit enough to travel. He’s trained in the classical German system that he’s familiar with.”

Next, Sheffield, 40, and her 12-year-old mare, Fairuza, kicked off Grade III competition with a bang. They trotted down the centreline with impulsion, executing lovely halts and turns on the haunches to add 72.000 per cent to Canada’s total. Speaking of her score, which is the highest Sheffield has received in three major games (Caen 2014 World Equestrian Games (WEG); Rio 2016 Paralympics; Tryon 2018 WEG), she said, “When I came out of the ring and I saw the score come up, I thought, ‘That’s the one before me, that’s not the right one.’ I knew Fairuza had done a nice test but I wasn’t allowing myself to believe that she’d done that nice a test.” 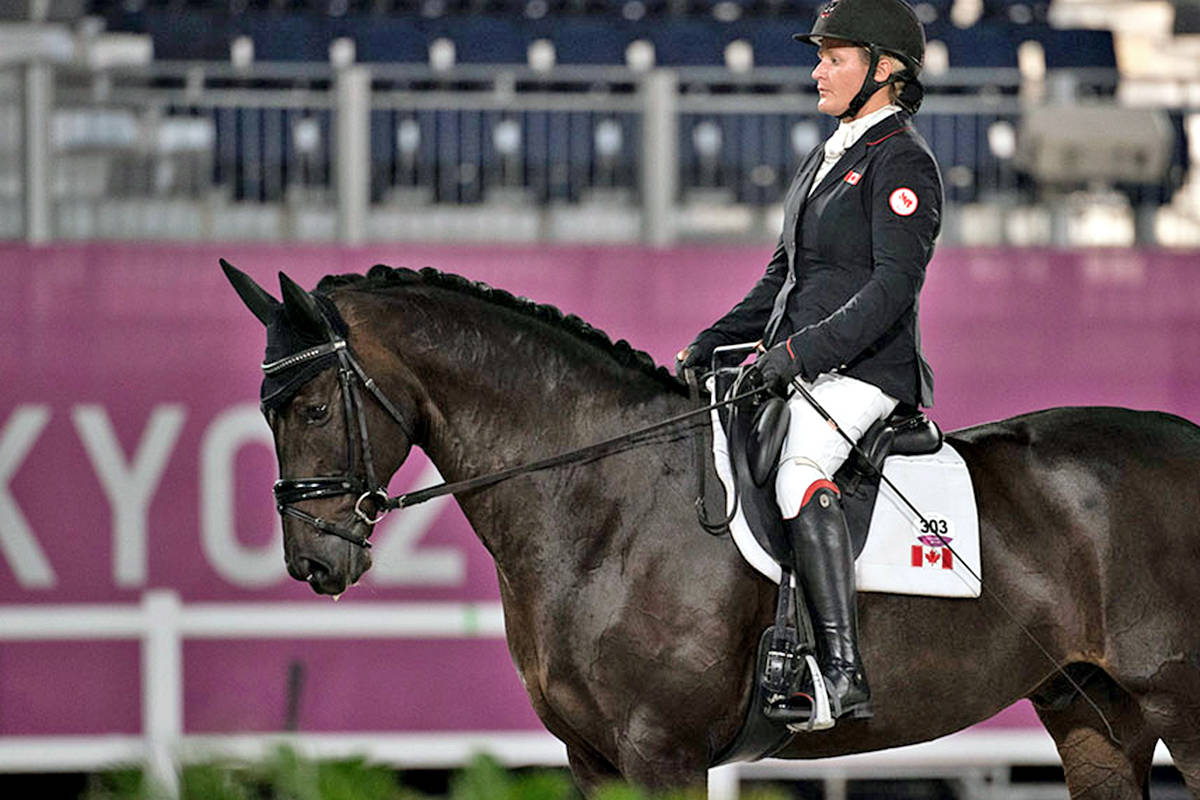 Aldergrove’s Lauren Barwick and Sandrino closed out the Tokyo 2020 Paralympics for the Canadian Para-Dressage Team in the Team Test. (Jon Stroud Media/special to Langley Advance Times)

Barwick, 43, added the last score for Canada on her Grade III mount, Sandrino (sired by Spirit of Westfalia). During the regular FEI season, the strategic riding of Barwick and Lee Garrod’s nine-year-old Westphalian gelding is regularly rewarded with marks over 70 per cent so their final score of 70.265 per cent came as no surprise.

Barwick commented, “I thoroughly enjoyed my ride with my horse in the arena; he was a different horse from the first day.”